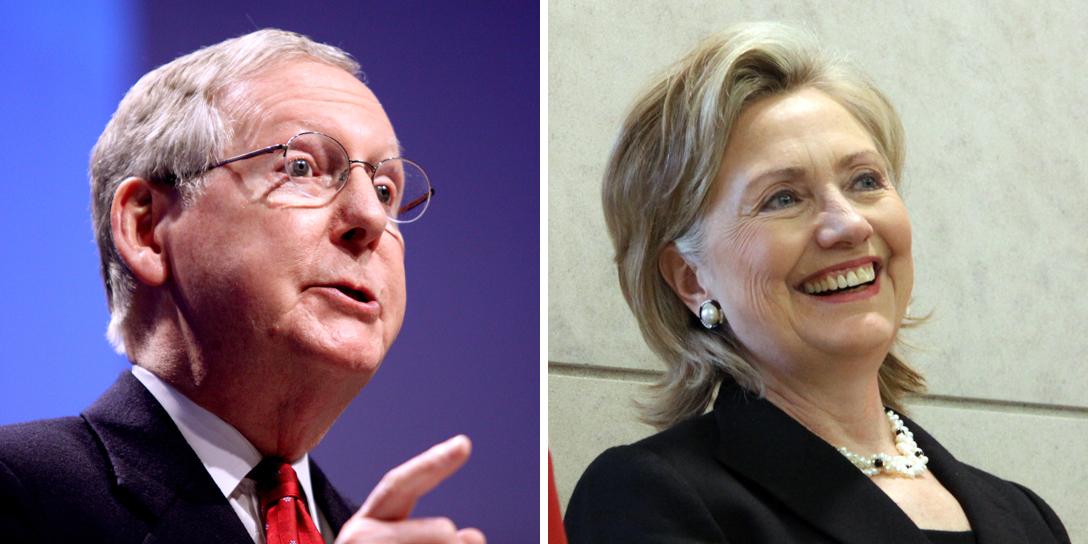 Did Hillary Clinton Get an Assist from Mitch McConnell?

Hillary Clinton is “indistinguishable” from Elizabeth Warren, Senate Majority Leader Mitch McConnell (R-KY) said recently—and that might just have been music to the ears of the Democratic frontrunner.

Bloomberg News reported that McConnell claimed that, rather than running “as Bill,” Clinton would be running as herself, and therefore pretty much as Elizabeth Warren, a senator from Massachusetts and a champion of many liberals.

“McConnell’s comments…came less than a week after Clinton—a former New York senator and    U.S. secretary of state—delivered a populist speech about elevating the middle class on    Roosevelt Island in New York City.”

In her speech, Clinton focused on ways she’d help elevate the middle class as president.

McConnell’s remarks indicate that Republicans—who have a crowded primary field—are seeking to counter that message by portraying her as more progressive than most Americans and as a continuation of President Barack Obama’s policies.”

The Senate majority leader also accused Obama of initiating a “Europeanization of America,” which he thinks Clinton would continue if elected.

While McConnell’s comments were clearly intended as an attack, they may actually do nothing but help Clinton’s campaign. Of the few people running for the Democratic nomination, only Vermont Senator Bernie Sanders (I) seems to be in any kind of position to challenge her—from the left.

That is why being compared to Warren at this point in the campaign certainly won’t bother Clinton. After all, many liberal Democrats had urged Warren to run because of her progressive stances on issues like Wall Street regulation and student tuition. With the Massachusetts senator out of the race, Clinton hopes that she can gather those votes instead of losing them to Sanders, so don’t be surprised to see the former first lady’s campaign using McConnell’s quote at some point down the road.