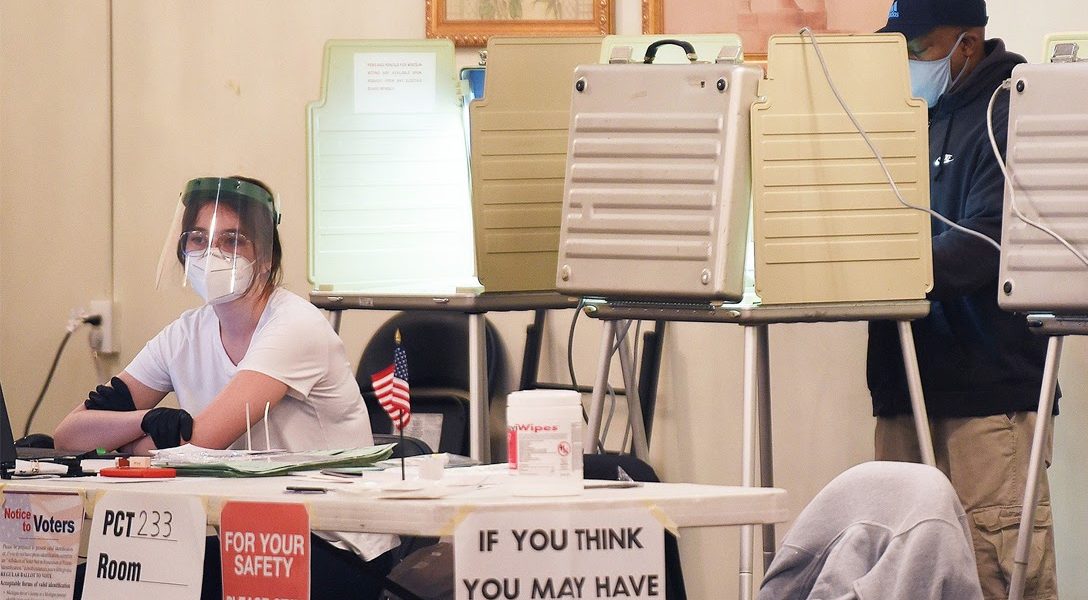 A voter casts his ballot in the primary election at Greater Emmanuel Institutional church while a poll worker waits in Detroit, MI on August 4, 2020. Photo credit: © TNS via ZUMA Wire
Elections

Four years ago, Donald Trump was the surprise victor in Michigan, edging out Hillary Clinton by less than 11,000 votes. One of the keys to his victory was a breakdown in the voting system in the Democratic stronghold of Detroit, and, even more importantly, much lower turnout there than what Barack Obama enjoyed in 2012.

Fast forward to 2020: Michigan is again considered a major battleground state, and Detroit is dealing with serious voting issues, especially in processing a surge of mail-in ballots. During primaries last month, Wayne County election data showed that 72 percent of the precincts in Michigan’s largest city recorded absentee ballot totals that did not match the number of ballots that were later actually tabulated by absentee-ballot counting boards.

The discrepancies were often small — some were out of balance by as little as one vote. But under Michigan law, any mistake means that in the event of a recount none of the votes in the precinct can be counted again. The original count would stand, eliminating the possibility that a recount in those precincts could alter the outcome.

The problem was so alarming that Detroit Mayor Mike Duggan (D) reached out to Michigan Secretary of State Jocelyn Benson to investigate and ask for assistance from Detroit City Clerk Janice Winfrey, who handles the city’s elections.

Duggan said he is taking steps to understand what went wrong and prevent a repetition in the general election. “We cannot have a recurrence of these problems in November,” Duggan said, speaking to the Detroit News.

In early September, Benson and Winfrey agreed to work together to administer the general elections and ensure “integrity and accessibility.”

The announced partnership was triggered in part by a lawsuit filed by three Detroit residents, including Highland Park activist Robert Davis, to force the secretary of state and the city clerk to hire more election workers and give them better training.

Davis said Winfrey was too “inept” to handle an election where there is so much at stake “because the Republicans are looking for any issue to challenge the validity of the election results.”

“My whole point is trying to get these errors corrected before the elections,” he added.

The partnership — which brings in additional poll workers, opens new polling locations, and adds a veteran election guru as advisor — is a milestone in that direction, according to the mayor.

But will they be able to handle what is expected to be an even bigger increase in mail-in votes in November? For the August primaries, absentee ballots represented more than half the votes cast statewide, a record that overwhelmed election workers. Polls were understaffed and staffers overworked, and not just in Detroit.

“It’s kinda like if you had a restaurant, and instead of serving on seven days a week, you try to serve everybody on one day,” said Lansing City Clerk Chris Swope.

Both Winfrey and Benson said that election workers in Detroit were so overloaded by the surge in absentee ballots, and a shortage of staffers due to COVID-19, that some were working more than 20 hour shifts.

“This in many ways was a reflection of the potential human error that overworked and stressed election workers can succumb to when you have a time crunch,” said Benson.

During an interview in August, Benson suggested a possible solution: allow workers to begin processing absentee ballots before election day to get them ready to be counted, something that is permitted in other states. It’s a laborious process: a ballot needs to be removed from the outer envelope; perforated stubs then need to be removed; then the ballot needs to be removed from the inner envelope; and finally it needs to be straightened and stacked before the counting can begin. But Republican lawmakers strongly opposed the proposition, saying it would lead to voter fraud.

So, to try to solve Detroit’s problems, the new plan calls for hiring thousands of additional poll workers, adding 14 satellite voting locations, and 30 secure drop boxes. This will allow people to request and return absentee ballots as early as October 5. Detroit is also bringing in Chris Thomas, Michigan’s elections director for more than 30 years, to play an advisory role.

Members of the Board of State Canvassers voted for the secretary of state to play a supervisory role after the August primaries. Norm Shinkle, one of the two Republican members of the four-member board, said that a joint effort between election workers and the city clerk’s office is the only way to avoid problems in November. He had called on Winfrey and the election workers to meet if Detroit “is going to run their own elections.” At the time, he said that “if that’s not done, the secretary of state walks in and runs it.”

But even though Benson’s office will play an expanded role, some election officials say it’s not an option for the secretary of state to completely run the elections. Jonathan Brater, the state’s election director, speaking to the Detroit News, said “logistically, practically, it’s not possible for Benson’s office to run Detroit’s elections.”

Mark Lindeman, director of science and technology policy for the national watchdog group Verified Voting, explained that “At the end of the day the city clerk has to conduct this election.” But Lindeman says he feels positively about this partnership. “I certainly think this will help set a good precedent,” he said, adding that it guarantees a much broader collaboration to ensure election integrity.

Now that the secretary of state and the city clerk’s office have teamed up, they’re trying to get a head start to avoid issues in November. The NAACP and Detroit’s pro sports teams — the Red Wings, Tigers, Pistons, and Lions — will all work with election officials to promote voter education, as well as work as staffers on election day. Additionally, the sports arenas will be used to support election administration. According to a press release, the city hopes to recruit 6,000 additional poll workers to “ensure every one of the city’s 182 polling locations and 134 absentee counting boards is fully staffed.”

“Democracy is a team sport and as a longtime resident of the city of Detroit, I am proud to stand shoulder to shoulder with Clerk Winfrey to ensure she has all the support she needs as her team prepares for the culmination of one of the most challenging election cycles in modern history,” Benson said in a statement. “We are all in this together and will work collaboratively with her office, the City of Detroit and Wayne County to ensure every vote is counted and our elections are secure,” she added.

Lindeman warned about the challenge of training new volunteers to help with a historic election, saying “There is always room for error.”

“Don’t expect perfection,” he added, but rather aim for an “election that is fundamentally fair and accurate.”

To be sure, this is not the first time Detroit’s electoral system has shown cracks. In 2016, when Green Party presidential candidate Jill Stein demanded that the votes be counted again, 60 percent of the votes in the city were deemed ineligible for a recount. The city also had significant problems with the optical scanners used to record ballots cast in person. In many cases machines jammed, and voters tried to insert their ballots multiple times, resulting in erroneous counts. “We do not have a voting system we can trust,” Stein said at the time in a conference call with reporters.

Unlike 2016, however, Democrats do have something to be hopeful about, aside from the beefed up voting process. They are seeing progress in reversing the enthusiasm gap. Four years ago, Hillary Clinton received almost 80,000 fewer votes in Wayne County, which includes Detroit, than Obama did in 2012. This year, however, saw a record Democratic turnout for the March presidential primary, a record which was shattered again in August for primaries that had relatively few major races on the ballot. The state has reported it’s already received a record 2.1 million requests for absentee ballots and expects that number to more than double leading up to November. Nearly 900,000 of those requests have come from the Detroit metropolitan area.

Recent polls show Joe Biden leading President Trump in Michigan by anywhere from 4 to 11 percentage points. Still, some Democrats in the state are skeptical of the numbers. Four years ago, prominent Michigan Democratic Rep. Debbie Dingell warned that the state could vote for Trump. This time around she has similar thoughts. “I think it’s a competitive race,” Dingell told Fox News. “I don’t believe the polls and I’m not going to stop working until Election Day.”