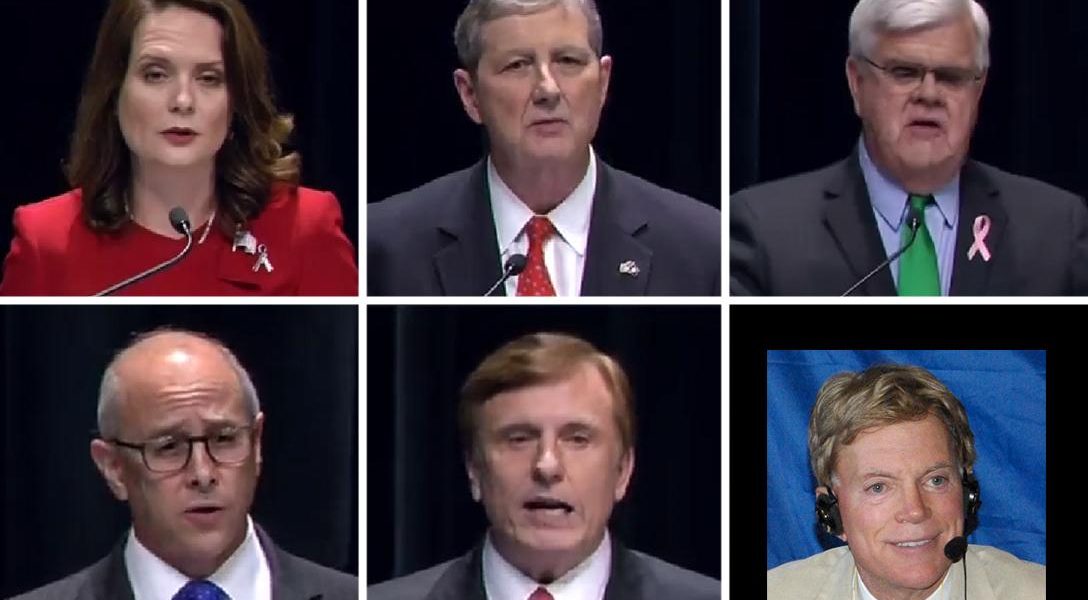 In Louisiana, a wild, 24-candidate US Senate race has it all: mudslinging, prostitution allegations, threats of drinking weed killer, and a former Grand Wizard of the Ku Klux Klan getting to debate at a historically black college. When the dust settles, the outcome might determine which party controls the Senate.

Normally a sure bet for Republicans in such a deep red state, the seat might not be a guarantee for the GOP this time around. Under Louisiana law, a candidate must get 50% of the vote in the Nov. 8 election — a highly unlikely scenario in Louisiana’s distinctive “jungle” primary, where all 24 candidates, no matter party affiliation, duke it out in a no-holds-barred free-for-all.

If no candidate achieves a majority, a runoff election between the top two vote earners will be held on Dec. 10.

“The 50% rule of the jungle primary gives underdogs a better chance of scoring an upset victory, and there are plenty of historical examples of second place candidates going on to win the election,” said Joshua Stockley, a political scientist at the University of Louisiana Monroe.

“The jungle primary even allows a candidate that most voters may perceive as a third or even a fourth option the opportunity to an election,” Stockley added.

The Beasts of the Jungle

Another factor that may spell uncertainty for the GOP’s control of the soon-to-be vacated Republican David Vitter’s senate seat — and, potentially, their control over the US Senate — is Vitter’s failed gubernatorial race last year against Democrat John Bel Edwards.

Vitter, hampered in the governor’s race by a previous scandal for all but admitting that he solicited a prostitute, did not seek re-election to his Senate post.

As for now, Stockley said the election of the first statewide Democrat since 2008 should be seen as a “deviation and not emblematic of any long-term political realignment.”

Rounding out the tally is Republican Rep. Charles Boustany at 14%; Democrat Caroline Fayard at 12%; and Republican John Fleming at 9%. Undecided voters make up approximately 15%.

If the control of the Senate is still up in the air heading into the Dec. 10 runoff, Stockley says to expect both parties to spend an unprecedented amount of money and star power to determine the outcome — a prospect which he says favors the GOP in a state like Louisiana where the Republican party’s roots are so ingrained.

Former Grand Wizard of the KKK David Duke is also in the race. Duke, who made headlines when he was the subject of equivocation from Donald Trump, polled recently at just over 5%, earning him a spot in the next debate.

Ironically, the Nov. 2 debate will be held at Dillard University — a historically black college.

Have a Drink of Weed Killer

On the Republican side, some accused State Treasurer Kennedy of promoting suicide for frequently saying he “would rather drink weed killer” when in opposition to something. His Republican rival faces even more serious allegations.

A book published in September, Murder in the Bayou, cited three anonymous sources claiming Boustany was a client of some of the murdered prostitutes known as the “Jeff Davis 8.” The book also discovered that Martin Guillory, a field representative for Boustany, ran the motel where some of the prostitutes worked.

Boustany’s campaign denied the allegations and claimed Kennedy and his staff were responsible for spreading the rumors.

Kennedy, in his denial, made sure to bring up the allegations once more for voters to hear:

“I want to be very clear that my campaign played absolutely no role in creating this story alleging Congressman Boustany’s sexual relationships with prostitutes that were later murdered… With just a few weeks left before Election Day, my campaign is focused exclusively on talking about real solutions to address our country’s problems. My wife, Becky, and I are keeping the Congressman, Mrs. Boustany and their children in our prayers as they deal with this as a family.”

Stockley said the allegations have not been taken seriously and thus far have not negatively affected Boustany’s run. Boustany, unlike most elected officials who have dealt with accusations of impropriety, he said, still has an “impeccable” reputation among both Republicans and Democrats in Louisiana.

“Love Is the Answer but … Own a Handgun Just in Case.”

With an election that pits every candidate for themselves, it’s no surprise that fellow party members would attack each other in an attempt to gobble up all of the votes from their party’s constituency — something Stockley said could both benefit or backfire.

“Any negative campaigning towards a fellow partisan has the potential to damage that candidate, which is precisely one of the reasons Vitter lost to Edwards,” said Stockley. “Vitter’s attacks were so hostile and so personal, that his opponents refused to endorse him. In fact, Republican Jay Dardenne endorsed Democrat Edwards.”

The five leading candidates and super PACs supporting them filled the airwaves with a barrage of new ads in October in an attempt to vilify their opponents and draw attention to themselves — a tough prospect in such a crowded field.

“I believe that love is the answer, but you ought to own a handgun just in case,” said Kennedy in a TV spot put out by his campaign describing his views while not mentioning his opponents.

A super PAC supporting Kennedy’s candidacy is taking a more aggressive approach. Their attack ad against Boustany said he voted to send billions of taxpayer dollars to countries that are “breeding grounds for terrorists.” The PAC said Fleming supports illegal immigration because he said the United States needs more workers. In their own ad, Fleming’s campaign countered that Kennedy and Boustany are the equivalent of junior high school students in a food fight while he is the only adult in the race.

Democrats Campbell and Fayard share common ground on many issues like raising the minimum wage, equal pay, and, strangely, both are anti-abortion and anti-gun control. This hasn’t stopped either from throwing shade at every possible opportunity, which could ultimately hurt both candidates’ chances of advancing to or winning the December runoff.

Former State Sen. Campbell has capitalized on Fayard’s political acrobatics on the issue of man-made climate change. In the past, Fayard, a New Orleans lawyer, said she did not think humans are responsible but has since backtracked or dodged the question entirely. Campbell said it’s a prime example of Fayard’s flip-flopping on the issue:

“In September you deny the problem; in October when your poll numbers are down you admit it? That’s not the kind of leadership I think people want from a US senator.”

Campbell has also criticized Fayard for her family’s donations to many Republicans, including former Louisiana Gov. Bobby Jindal and for John McCain in his 2008 presidential bid. In a TV ad, Campbell slams Fayard for her Wall Street background, saying she “can’t be trusted.”

Fayard’s main line of attack on Campbell is for being what she calls a “career politician” in reference to his 26 years as a state senator in Louisiana, something Campbell has not taken kindly to:

“We are like daylight and dark,” Campbell said. “Before you (Fayard) start telling people what you’re going to do, why don’t you tell people what you’ve done? I know the answer. Nothing. Absolutely nothing.”

“Foster Campbell has a problem: he’s losing to a woman, and he doesn’t know how to deal with it,” said Fayard. “His campaign is failing, and instead of taking me on directly, he is dismissing me, trying to lump me in with my family, as if my voice isn’t valid on its own.”