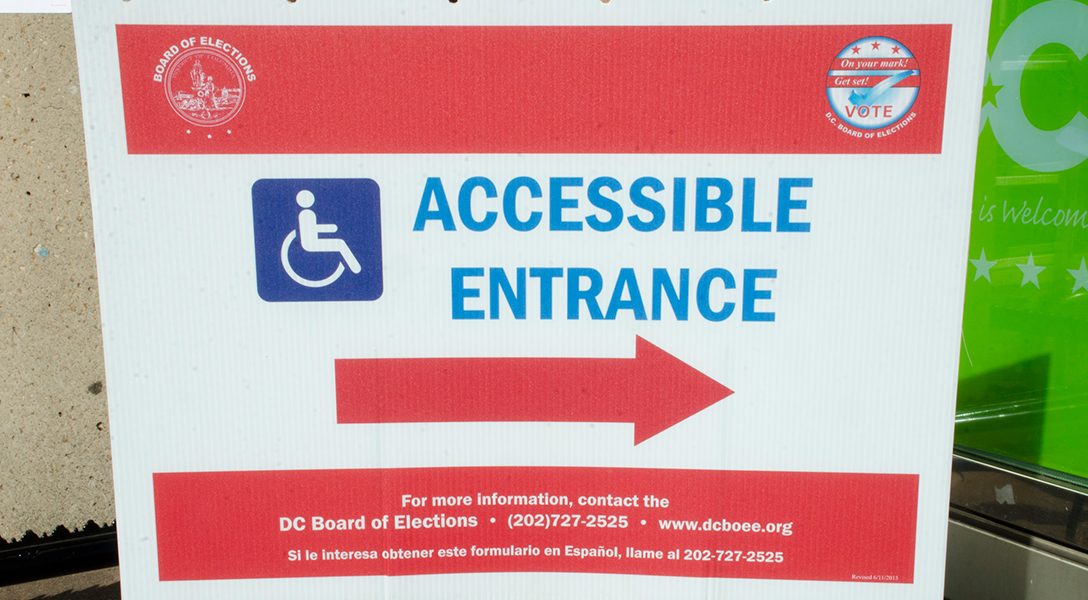 For many years, the voting integrity community has grappled with the question of how to accommodate voters with disabilities without making elections less secure. There might finally be a solution on the horizon.

One-sixth of the American electorate — over 35 million eligible voters — is disabled. For many of them, simple tasks that many of us take for granted — say, putting pen to paper — is, at best, terribly inconvenient, and, at worst, impossible.

This is why the disabled prefer direct-recording electronic voting machines (DREs), which advertise handicap-friendly features like touchscreens and audio-enabled ballots. But these machines often do not leave a paper trail, and are therefore considered less reliable by the voting-integrity community.

This debate has created a rift among the advocates, forcing each side to think long and hard about how exactly to define a “fair election.”

For many advocates, auditability — the degree to which an election outcome can be verified (audited) independent of the original vote-tabulating system — is the most important standard. According to this point of view, the only way to assure voters that elections have not been compromised (by incidental code hiccups or intentional tampering) is to create total system transparency — which means physical ballots and the paper trails they make possible. This is considered the ultimate safeguard against election tampering.

Unfortunately, paper balloting is a major issue for accessibility advocates who, above all else, prize effortless and anonymous vote casting for all Americans, regardless of disability or anything else that would hinder democratic participation. Advocates like Michelle Bishop of the National Disability Rights Network believe this objective is just as essential as the transparency issue, although she recognizes it creates a Catch-22 situation.

So far, there is no perfect, one-size-fits-all solution to these competing priorities. Paper is clearly the  superior defense against vote manipulation, since wide-scale paper tampering requires more time, resources, and inside agents than infiltrating a computer system, which can be accomplished by a lone agent and a thumb drive loaded with malware.

In addition, confirming physical ballots is usually as simple as eyeballing the markings, while appraising a purely electronic system requires auditors to diligently examine thousands upon thousands of lines of code to verify the final vote count. And even then, the possibility that savvy hackers could cover up any trace of their presence cannot be ruled out.

The verification camp also likes to remind accessibility proponents that technology like ballot-marking devices (BMDs) was designed specifically to meet the needs of disabled voters. But while BMDs may do a fine job compensating for visual impairments, Michelle Bishop of the National Disability Rights Network reminds us that there is a wider spectrum of disabilities to consider. The BMD is no panacea, she says, and anyone who thinks otherwise is taking a “narrow view of what it means to have a disability.” She points out that many disabilities like dexterity dysfunctions, have only been remedied by DREs.

Sacrificing the suffrage of disabled voters is not just unreasonable, says Bishop. It fundamentally undermines the inclusiveness upon which our current voting system is predicated.

“That’s just not America,” she says.

Although 27 states and DC offer a “no-excuse” vote-by-mail option — sending ballots straight to voters’ homes, where they ideally already have the necessary tools to navigate the paper medium — there is still a ways to go before this is implemented throughout the country.

The early-voting movement is gaining momentum: more than one-third of votes cast in the 2016 Election were submitted early, up 20% from 2000.

But that still leaves a substantial proportion of the electorate vulnerable to being disenfranchised by inaccessibility issues.

Pam Smith, President of the Verified Voting Foundation, thinks we can have it all, telling WhoWhatWhy the time has finally come to “speak about accessibility and auditability in the same breath.”

Her hope rests in a prototype being developed by Los Angeles County, which Smith calls “as accessible a system as you will find, paper or not.” Where other systems before it have failed, Smith says this system succeeds on the merits of an integrative design process in which “stakeholders from all communities carefully addressed all the issues” and provided valuable feedback.

Beyond visual impairments already covered by BDMs, this prototype also accommodates dexterity deficiencies by holding voters’ ballots in place while they inspect their choices. When they are satisfied with their choices, the system automatically retrieves the paper and places it in the ballot box — which eliminates the need for assistance by poll workers and thereby preserves voter anonymity.

Smith recalls one design team worker even went so far to run his motorized wheelchair into the device, full force, to test its durability and stability.

In some respects, the prototype is actually an improvement on DREs, whose text-to-audio readout functions often derive from the system’s memory rather than the original ballot, forcing voters to put blind trust in the integrity of the system’s software. Because the LA prototype reads directly from printed-paper, voters have better cause to trust that their selections were recorded accurately.

Older DREs — still operating in some jurisdictions — also lack the prototype’s dual-switch technology, which lets voters bypass the provided keypad and instead navigate the ballot using input mechanisms better suited to their condition, such as joysticks or foot pedals.

For all its promise, however, there is still a transparency caveat. Final tabulations derive from a QR code scan, which Smith concedes “is somewhat opaque”. She would prefer to see the “tally made on actual human-readable words, rather than machine-readable code.”

But for the time being, the processing speed of QR gives it an advantage over human-readable — that is, optical character recognition (OCR) — systems, due to limitations imposed by the prototype’s memory and computing power. But as the system evolves, implementing OCR down the line is a real possibility.

It remains to be seen, however, if this system will be feasible for smaller jurisdictions. Unlike current voting systems on the market, which are supplied by corporate vendors that offer maintenance and support services, the prototype model is dependent on the expertise and resources of the jurisdiction. This is no problem for a large jurisdiction like Los Angeles, with access to technologically proficient volunteers and flush with untouched election cash from 2002’s Help America Vote Act.

But for the 10,000-plus jurisdictions across the U.S. that average less than 1,500 registered voters, implementing the LA system may present serious challenges.

Still, should it live up to its promise, the LA prototype has the potential to not only allow the election integrity community to move beyond this contentious issue, but also to fulfill the democratic dream of bringing the vote to all eligible citizens, regardless of physical disabilities.