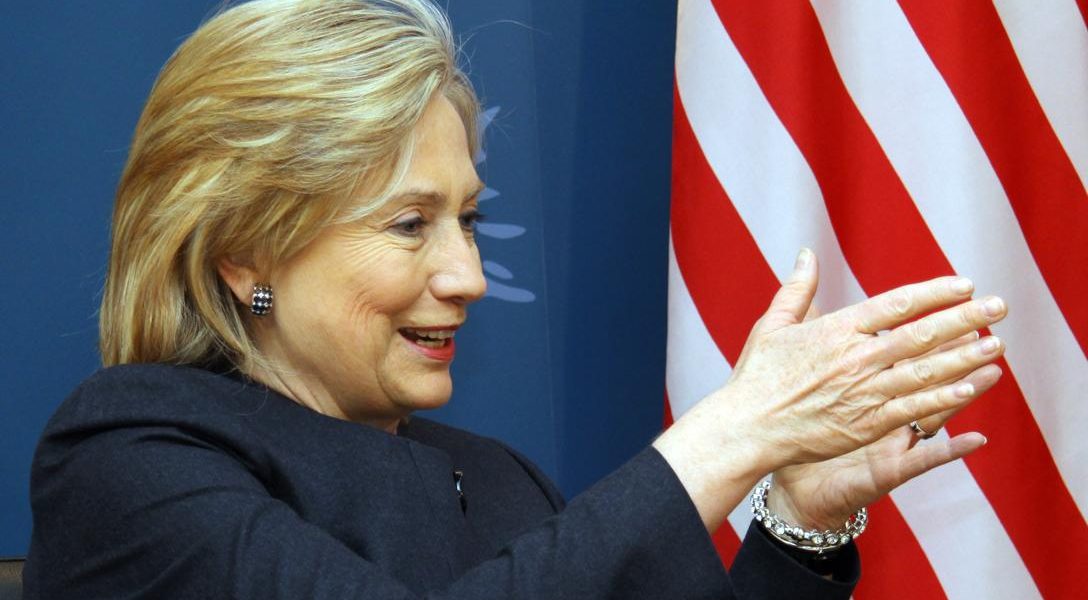 Hillary Clinton has a lead in Democratic primary polls that would make most politicians envious. But this hasn’t stopped the former first lady from fighting, and spending, like her life depends on it.

One target of this strategy may be a man who isn’t even running — yet. Some analysts suggest that Clinton’s expensive ad buys are aimed, in part, at keeping Vice President Joe Biden out of the 2016 race.

One thing is sure: Clinton is spending enormous amounts of campaign cash, more than almost any of her opponents in either party. An assessment by The New York Times found that though the Secretary has been fundraising extremely well, her campaign has already spent 86 percent of the money it raised in the third quarter of 2015 — a rate higher than that of most major presidential candidates in this cycle.

Clinton’s spending rate looks like that of Jeb Bush, a candidate who is in fourth place in the polls for his party’s nomination, not the front-runner with a 20-point polling lead over her closest rival.

And unlike other candidates, much of this spending is on ads in early primary states.

An examination of the advertising time on the airwaves by the Center for Public Integrity found that Clinton has been paying for thousands of ads in Iowa and New Hampshire. Her campaign alone accounts for one-in-four of the total ads aired in the two early primary states, and more than the combined total of Jeb Bush, Marco Rubio, Ben Carson, Ted Cruz, Rand Paul, and Donald Trump.

The flood of ads is particularly surprising coming from a frontrunner of Clinton’s stature. Bernie Sanders has yet to buy a single ad in the two states, with other Democratic hopefuls Martin O’Malley, Jim Webb, and Lincoln Chafee doing little more.

And the move is especially strange considering the usual wisdom of campaign ads, which are most effective shortly before an election. While campaigning, such as media appearances, meetings with voters, and ground operations, can have lasting effects on voter preferences, television advertising is rarely done so far in advance of the balloting.

But according to campaign experts reached by WhoWhatWhy, the key to Clinton’s aggressive TV strategy may not lie in the results of primaries more than three months out — but in the news media narrative right now.

Carroll points to how Clinton’s media narrative has been colored by recent bad news about her campaign, including the FBI investigation into the private email server she used while at the State Department, talk of a possible competing presidential bid by Vice President Joe Biden, and especially falling poll numbers in these key primary states. In Carroll’s view, the ads are a push by the Clinton campaign to create its own good news.

Nate Silver, the data-analysis guru behind FiveThirtyEight.com, recently highlighted the way these three negative stories together have put Clinton in “a poll-deflating feedback loop.”

“No one of these stories is necessarily all that damaging to Clinton on its own. But together, they potentially enhance and reinforce one another,” Silver wrote on his website.

He predicted that the Clinton campaign would find a way to break the cycle of bad news that was coming from the continued reporting of these three problems for the campaign, suggesting that perhaps this kind of ad buy was coming.

Buying these ads could lead to a boost, or at least stop the fall, in Clinton’s polling numbers in these states, if only temporarily. And that would, at the very least, remove one line of attack that the campaign has faced recently.

“Elections are a lot about momentum,” says Professor Carroll. “The Clinton campaign must feel like they’re sliding backwards at this point. If they can’t rely on the news media, they’ll resort to paid media.”

Clinton has already managed to fix some of her problems in the media, through a debate performance on October 13 that was lauded by the political media as a victory. But with the effect of the debate on her polling numbers still unclear, the massive ad buying could act as an insurance policy if the polls do not start moving the way Clinton wants.

Kyle Kondik, Director of Communications for the University of Virginia Center for Politics and Managing Editor of Sabato’s Crystal Ball, sees a potential ripple effect: if Clinton can temporarily boost her poll numbers through these ads, it would change the narrative on the other problems her campaign is dealing with.

“I’m sure that Clinton would like to keep Biden out, and one way to do that is to improve her numbers,” Kondik told WhoWhatWhy. “The ads might help with that.”

Kondik also pointed out that candidates receive discounts on ad time that their campaigns buy directly compared to purchases by Super PACs.

The difference in these TV ad rates has allowed Clinton’s campaign to buy so much ad time while still spending less than the Super PAC supporting Jeb Bush, which boasts a war chest in the hundreds of millions.

“One can argue the effectiveness of such early campaign spending, but the Clinton team has money to spend and it is spending it,” writes Kondik.

Bush’s own ad buy comes as the former governor faces problems similar to Clinton’s. He is a putative front-runner facing tougher opposition than expected in a year of anti-establishment fervor. If anything, Bush’s campaign is in worse shape; his poor start has led to growing fears among his backers about the viability of his candidacy.

As candidates in both parties learned from Clinton’s failed 2008 primary campaign, “front-runner” is not the same as “inevitable.”