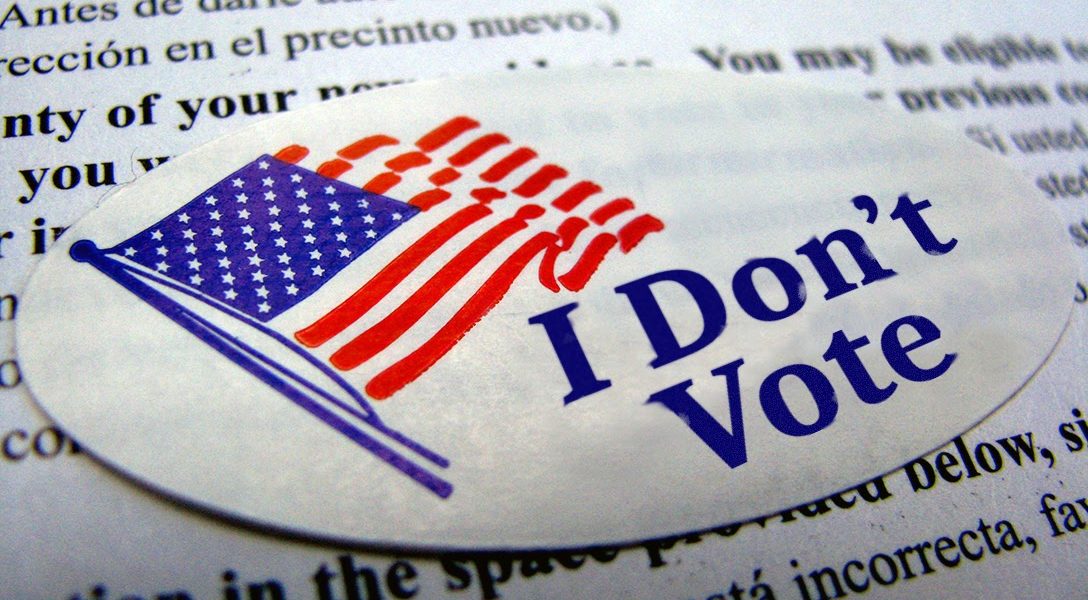 Can We Count on Nonvoters to Vote?

“This is a spiritual battle we are in. This is good versus evil. We have to do everything we can to win,” said one speaker at an August gathering of right-wing funders and conservative nonprofit groups planning for the 2020 election, according to a video recently revealed by the Washington Post.

While much talk and even more effort has focused on the small sliver of “undecided” voters, or the “typical white suburban housewife” who may have fallen away from Trump over the past four years, a much larger cohort is at stake. These are nonvoters or infrequent voters, mainly people of color or young people, who cannot vote due to suppression — or who are just discouraged by the election process.

That video, one of several released, showed meetings of the Council for National Policy, a little-known group that works as a hub for conservative donors and right-wing activists; hard-right movers and shakers put their heads and pocketbooks together to figure out what they could do to suppress the vote for Democrats.

Despite the strong-arm tactics of President Trump’s Postmaster General Louis DeJoy, which have included everything from destroying sorting machines to cutting postal workers’ hours to such an extent that mail was left on the workroom floor, there was still tremendous concern about mail-in voting at the conservative conclave.

“We need to stop those ballots from going out, and I want the lawyers here to tell us what to do,” said Tom Fitton, president of Judicial Watch, a right-wing legal organization which has made “voter fraud” a watch cry.

Multiple voting-rights groups have been putting their efforts into fighting back against new ID requirements, the elimination of polling places, and Trump’s Twitter attacks on mail-in voting. They say that people of color in particular have fallen out of voting, or have faced massive attempts at suppression when they try to cast their ballot. And they say it’s time Democrats stop ignoring them under the assumption that they don’t vote. They can, and they will, if given the opportunity.

Fair Fight, the voting-rights group started by Stacey Abrams, has estimated that Republicans have raised $20 million for battles over election rules. Conservative advocacy groups have joined the legal war, filing briefs in a slew of states including New Mexico, Minnesota, Missouri, and Nevada. The Honest Elections Project (a living and breathing oxymoron, since it fights to suppress voting) has joined the legal battles over voting in six states and has spent $250,000 on advertising opposing voting by mail.

Yet over 21 million people have so far cast ballots either by voting early or through the mail, according to the United States Elections Project at the University of Florida. In Georgia, a record number of 128,590 ballots were cast on the first day of early voting on Monday — a more than 40 percent increase from 2016. The high turnout led to long lines and hours of waiting. Some people were still voting a little after 9 p.m.

We've had a record first day of Early Voting in Harris County. So far over 68,000 votes have been cast, beating the 2016 record.

Early voting began in Kentucky and Texas on Tuesday, and voting day records were set there as well.

Even with the long lines and massive mail-in voting, it is too early to tell what the results will be once all the votes are tallied. And it is generally accepted knowledge that Trump will challenge any outcome for Biden that isn’t a landslide.

But voting activists who have been working tirelessly since before the pandemic hit think their efforts over time may be paying off. Andrea Miller is the executive director of Reclaim Our Vote (ROV), a grassroots organization based in Virginia whose focus is people of color and young people in eight southern and western states who “have fallen off the voting rolls.”

There’s been a lot of talk during this election about the “undecided,” the small sliver of people in an extremely politicized time who haven’t made up their minds, or about the suburban white women who voted for Trump in 2016 but who are now having second thoughts. Miller is having none of that.

Miller, who says she grew up in Chicago watching her two uncles’ involvement in politics as part of Mayor Richard J. Daley’s political machine, has a long career as an activist, from Dennis Kucinich’s presidential campaign through Moveon.org to Progressive Democrats of America.

“People think that voting is a right, but it isn’t,” she said from her home in Virginia. “Here we treat it like privilege. If you don’t use your vote for a couple of years, you are thrown off the rolls. People don’t know this.” She called voter purging “the biggest example of voter suppression.”

In Texas, she said, 5.1 million voters were de-registered or thrown off the rolls for not voting. Forty-eight million people in the US are considered “inactive” or are already unregistered; 16.6 million of them are people of color.

Miller and the organization she directs, People Demanding Action, a multi-issue advocacy group, formed ROV in 2017, during the election of Doug Jones in Alabama. “The Democratic party was working very hard to bring out the votes in the big cities like Birmingham and Huntsville. What about Montgomery, Mobile, Selma, and the other areas of the Black Belt?

America Abstains: Millions of Voters Have Lost Faith in US Democracy

In 2020, ROV — which works with a variety of nonprofits and faith-based organizations like Black Voters Matter, Mi Familia Vota, VoteRiders, American Ethical Union, Religious Action Center of Reform Judaism, and Rapid Resist — sent out 6.4 million postcards to potential voters in Alabama, Arizona, Florida, Georgia, Mississippi, North Carolina, South Carolina, and Texas about registering to vote. And then from July on, the postcards and phone calls switched to encouraging people to pledge to vote and involving others in their communities — calling their neighbors, organizing rides to the polls. “We are trying to remove the impediments to voting — IDs, transportation or information.”

Because of the pandemic, postcards, phone calls, texts, and even letters have taken the place of door knocking and person-to-person canvassing. The Biden campaign has launched a massive phone bank and texting operation — especially in swing states.

Miller says what her group and its allies do is different. They don’t target reliable, frequent voters but people who, for whatever reason, haven’t voted. What ROV does is a “vote your power campaign … even though they have been led to believe that they have no power. They are the difference in every election,” she said.

Barack Obama’s two campaigns did a major outreach to people of color who hadn’t voted for a while or at all, which helped to bring him into office. Miller says Donald Trump won in 2016 not because white working-class voters responded to Trump, but because the Clinton campaign didn’t reach out in the same way to infrequent voters. “The Clintons turned the party of the people to the party of the corporations. Our people are not wealthy; they are working people. The party lost their base.”

ROV and its allies are working to get that base back. She said they have had 25,000 volunteers writing postcards to voters and making phone calls.

Whether these ground troops connecting with voters who have lost their voter registration or their faith in the vote will swing an election, no one yet knows. But for Miller — who says she’s not a member of the Democratic party and that once the election happens, her organization’s job is to hold whoever-gets-elected’s feet to the fire — it’s only the first step.