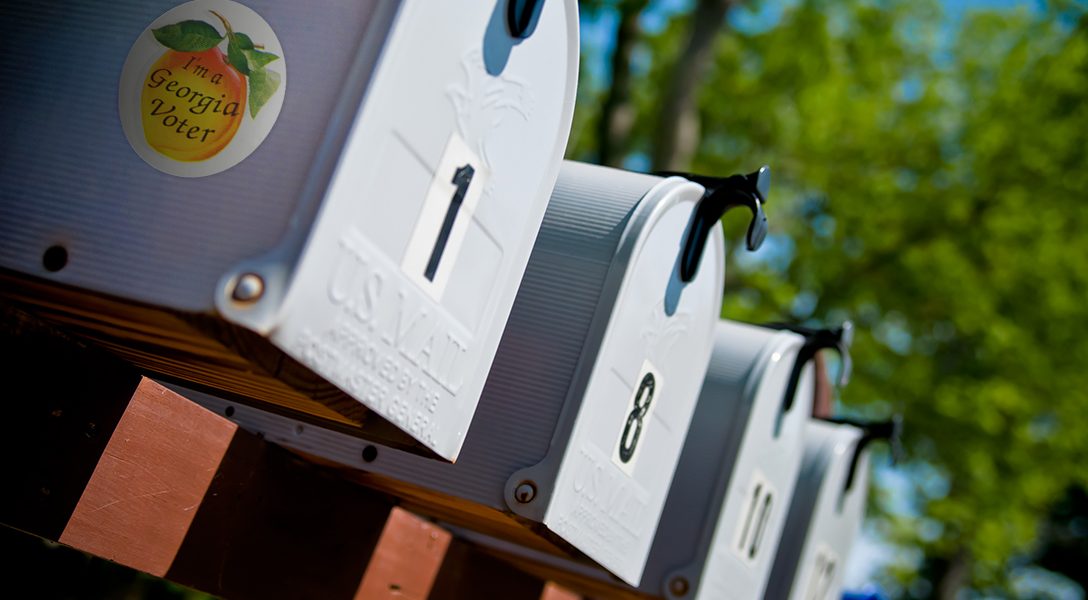 Georgians are mailing in absentee ballots at twice the rate seen in 2014. Photo credit: Adapted by WhoWhatWhy from Ezra Freelove / Flickr (CC BY-NC-SA 2.0) and James Lee / Flickr (CC BY 2.0).
Elections

Prior to a recent Atlanta screening of I Voted? — a 2016 film on election integrity — Scott Holcomb, a Democratic state lawmaker who has worked on the issue, capped his short talk to the audience by exclaiming, “Vote this fall — and I hope your vote is counted!”

Laughter first rose from the crowd, followed by several cries of “Vote absentee!”

Earlier the same day, at a Roswell Library presentation on voting machines, Cora Wright, elections assistant at Athens-Clarke County Board of Elections, noted that “people are being educated this time, and they’re voting on paper ballots. They’re piling up at our office!”

Indeed, more than twice as many voters as four years ago have sent in absentee ballots in advance of Georgia’s midterm elections, an unusually high share of which have been black voters, according to state figures and data analysts.

The reasons behind such numbers, observers say, include concerns about election integrity, an increased interest in politics, and enthusiasm for Democrat Stacey Abrams — who, if elected, would become the first black female governor in US history. The tight race in Georgia is attracting national attention, and WhoWhatWhy has a special team on the ground there.

As of October 7, almost 30,000 voters had sent in absentee ballots, according to data available on the secretary of state’s website, up from about 13,000 at the same point in 2014. Nearly 42 percent of those ballots came from black voters, about 58 percent of whom didn’t vote in 2014 — according to Georgia Votes, a site prepared by data analyst Ryan Anderson.

“There are several possible reasons for this [increase],” said Michael McDonald, political science professor at the University of Florida and founder of the United States Election Project, an online resource on elections. “It could be a strategy to bank votes early by the Stacey Abrams campaign. It could be people paying attention to the lawsuit about voting machine safety have decided this was a better way to vote.”

A lawsuit was filed this year after flaws in Georgia’s voting machines were exposed by computer researchers in 2016 and 2017. They found cyber vulnerabilities in the electronic system used in early voting and on Election Day.

News of these issues has been widely broadcast on TV and radio across the state, noted Marilyn Marks, election integrity activist and a plaintiff in the suit. She has been interviewed on all major TV news channels and, a handful of radio stations, in Atlanta, Savannah, and Augusta.

“There [are] general widespread concerns about voting on electronic machines,” she said. But she also noted that the Abrams campaign has been pushing mail-in ballots in its advertising.

The lawsuit and related issues “brought to light that Secretary of State Kemp and the Republican Party are not that keen to create a paper trail,” said William Boone, political science professor at Clark Atlanta University. “Voters want to feel that their vote is counted and secure.”

On-the-ground activists say there’s marked, early interest in the election. “People are a lot more engaged than they’ve ever been,” said Helen Butler, executive director of the Georgia Coalition for the People’s Agenda, a voting rights group. She’s been working on getting people involved in elections since 2000. “Some people are really concerned about election security, but also there’s a lot of enthusiasm around this election,” she added.

This may cause Georgia’s elections, and midterms in other states, to have historically high turnout numbers.

“We’re in a different world than we have been for several decades,” Boone said. “American politics are being talked about on every platform, bringing a greater level of awareness.”

Another possibility, particularly for African American voters, is that absentee ballots may be a more attractive choice than voting in person because these voters have already made up their minds. Previous research suggests that “people who have made their decision feel like they might as well get voting out of the way,” said Andra Gillespie, political science professor at Emory University. Add to this the fact that black and Latino voters have had to wait as much as twice as long as white voters on Election Day, according to research.

The tallies to date are still small in a state with 6.7 million registered voters, and any interpretation should be made with caution. But the people mailing in ballots are likely what McDonald called “highly informed, high propensity voters.”

Black voters seem to be getting the message. Their share of absentee ballots counted is some 10 points above the ratio of black voters in the state’s voting-age population, which is about 31 percent.

“The day-by-day numbers [are] shifting toward fewer whites,” McDonald added. “There may come a point where there are more African American votes than whites. That would be extraordinary. It’s anything but typical, what we’re seeing right now.”

One voter laid out his reasons for voting absentee in a comment on one of McDonald’s daily tweets. Among them is that Georgia’s voting machines have already been “hacked,” resulting in the secretary of state moving Georgia’s election center out of Kennesaw State University. Also, Williams wrote, “electronic machines are old with no audit trail.”