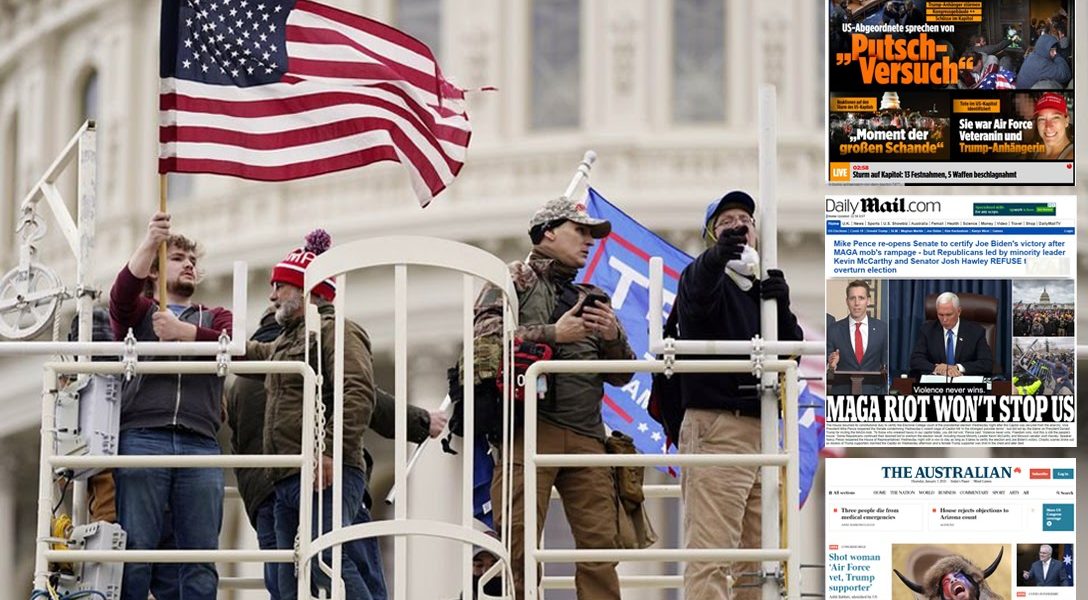 The world responds to attacks on the US Capitol. Photo credit: Ninian Reid / Flickr (CC BY 2.0), Bild, The Australian, and Daily Mail.
Elections

Allies and Adversaries Weigh In on Trumpist Insurrection

World leaders on Wednesday and Thursday expressed shock as pro-Trump mobs stormed the US Capitol grounds, breaching the House and Senate chambers and breaking into offices in an attempt to overturn the results of the November 3 election. All this after being incited by President Donald Trump in a morning rally outside the White House.

Nearly four hours passed before several law enforcement entities could secure the Capitol, and dismayed responses crept in from across the globe as the scenes of mayhem recalled the type of political unrest that Washington often chastises other countries for allowing, whether it be in parts of Eastern Europe, Africa, Latin America, or the Middle East.

British Prime Minister Boris Johnson, a onetime Trump political ally, said Thursday that the president was “completely wrong” to cast doubt on the US election and encourage supporters to storm the Capitol.

The UK prime minister said he “unreservedly condemns” the US president’s actions.

These ramped-up comments singled out Trump directly and came after Johnson called the events in the Capitol a “disgrace” on Wednesday, saying the United States stood for democracy around the world and that it was “vital” now that there should be a peaceful and orderly transfer of power to President-elect Joe Biden. German Chancellor Angela Merkel expressed her shock Thursday in a meeting with country lawmakers and said Trump bore some of the blame.

“We all saw the unsettling pictures of the storming of the US Congress yesterday evening, and these images made me angry and also sad,” Merkel said.

Merkel added the president himself had to accept part of the responsibility for failing to concede.

“I regret very much that President Trump has not acknowledged his defeat since November and also again not yesterday. Doubts about the election outcome were stirred and created the atmosphere that made the events of last night possible.”

Earlier, Merkel’s Foreign Minister Heiko Maas blamed the violence on Trump’s inflammatory rhetoric and said democracy’s enemies would be cheered by scenes of violence at the United States Capitol.

In a tweet, Maas said, “Trump and his supporters must accept the decision of American voters at last and stop trampling on democracy.” Canadian Prime Minister Justin Trudeau expressed his concern but also his confidence in US democracy. “Obviously we’re concerned and we’re following the situation minute by minute,” Trudeau told a Vancouver radio station. “I think the American democratic institutions are strong, and hopefully everything will return to normal shortly.”

His foreign minister, Francois-Philippe Champagne, was a little more blunt. He said on Twitter that, “Canada is deeply shocked by the situation in Washington DC. The peaceful transition of power is fundamental to democracy — it must continue and it will. We are following developments closely and our thoughts are with the American people.”

French Foreign Minister Jean-Yves Le Drian said on Twitter, “The violent act against the American institutions is a grave attack on democracy. I condemn it. The American people’s will and vote must be respected.”

Volkan Bozkir, president of the 193-member United Nations General Assembly, said he was saddened by the developments. He tweeted, “I believe that peace & respect for democratic processes will prevail in our host country at this critical time.”

Additionally, UN Secretary-General Antonio Guterres was “saddened” by the events at the US Capitol, his spokesman said.

“In such circumstances, it is important that political leaders impress on their followers the need to refrain from violence, as well as to respect democratic processes and the rule of law,” UN spokesman Stephane Dujarric said in a statement.

Australian Prime Minister Scott Morrison described the scenes in Washington as “distressing.” “We condemn these acts of violence and look forward to a peaceful transfer of Government to the newly elected administration in the great American democratic tradition,” he posted on Twitter.

Spanish Prime Minister Pedro Sanchez said in a tweet, translated, “I am following with concern the news that is coming from Capitol Hill in Washington. I trust in the strength of America’s democracy.

“The new Presidency of @JoeBiden will overcome this time of tension, uniting the American people.”

New Zealand Prime Minister Jacinda Ardern tweeted that, “Democracy — the right of people to exercise a vote, have their voice heard and then have that decision upheld peacefully should never be undone by a mob. Our thoughts are with everyone who is as devastated as we are by the events of today. I have no doubt democracy will prevail.”

“Quite Maidan-style pictures are coming from DC,” Russia’s deputy UN Ambassador Dmitry Polyanskiy retweeted on Twitter, referring to protests in Ukraine that toppled Russian-backed President of Ukraine Viktor Yanukovich in 2014.

Turkey’s foreign ministry issued a statement expressing concern but also seemingly mocking the US. He called for calm and common sense while urging Turkish citizens in Washington, DC, to avoid crowds and the protest area, the latter a message more commonly heard from the US State Department in advisories to US travelers abroad.

Venezuelan Foreign Minister Jorge Arreaza tweeted, translated, that “Venezuela expresses its concern for the violent events that are taking place in the city of Washington, USA; condemns the political polarization and hopes that the American people will open a new path toward stability and social justice.”