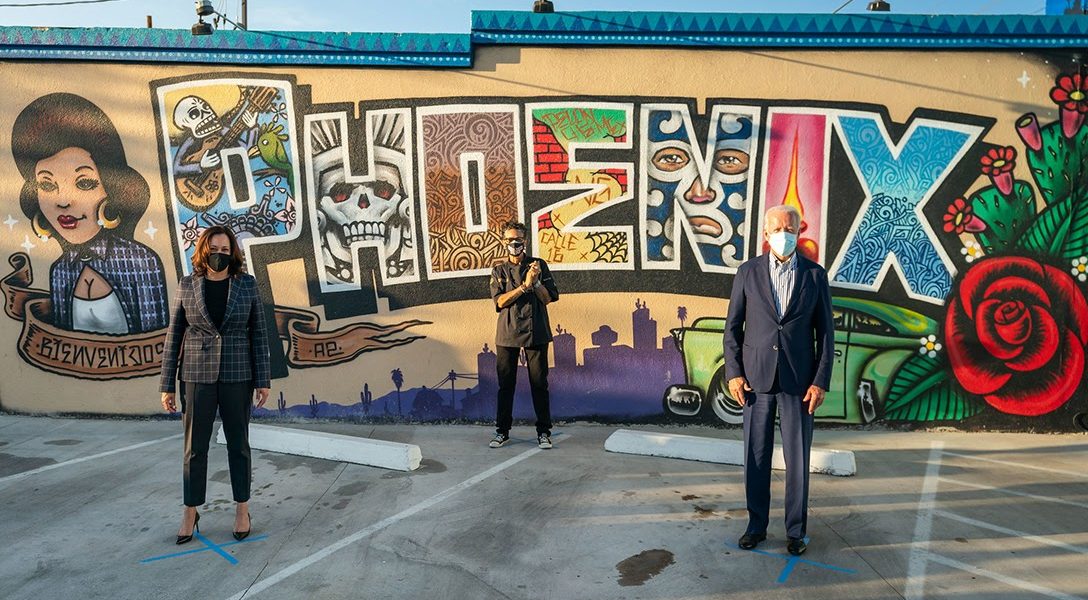 Joe Biden is hanging on to a narrow lead in Arizona, but voting-rights activists say he’s missed a golden opportunity to build the kind of formidable support among Latinos that would have put President Trump at a much safer distance in his rear view mirror in this battleground state.

It was only in August, with alarm bells ringing, that the Biden campaign established its Arizona Latino Leaders Council, comprised of politicians and community leaders who have now held events to support him.

Biden had been outperformed among Latinos in the Democratic primaries by Bernie Sanders, who excelled at using community-based campaign plans. Sanders’s winning strategy was reinforced by a study conducted by the Latino Politics and Policy Initiative at the University of California, Los Angeles, which indicated that providing voting information for Latinos at community health clinics, for instance, was a key to increasing voter turnout.

“If you do outreach,” said Sonja Diaz, the founder of the initiative, “it needs to come from a culturally and linguistically tailored messenger. For Latinos, doctors, teachers, and family members are trusted messengers and can be relied on to engage and mobilize the Latino vote.”

Diaz said another key is that Latino support cannot be taken for granted. “I think one of the most important things for Latino voters is that their vote cannot be expected, it needs to be earned.”

This isn’t to say that Biden isn’t doing well among Latino voters, just that he could be doing better.

Among all voters, the FiveThirtyEight average of polls shows Biden with a 2.6 percent lead over Trump in Arizona, a lead that’s held fairly steady but has tightened. Four years ago, FiveThirtyEight polls showed Hillary Clinton was up by just under 1 point in Arizona at this time, a lead that vanished within days. Trump ended up winning Arizona by 3.5 percent.

Biden has a commanding lead among Latinos, just a little better than Clinton enjoyed in 2016. The latest numbers from Equis Research, which specializes in polling of the Latinx electorate, show Biden with 65 percent of their vote compared to to 26 percent for Trump. The poll was conducted in late September. An Equis poll conducted a month earlier showed similar numbers, though the firm said the new survey indicated Biden has “consolidated” support among Democrats.

In late August, Equis polling showed that Trump’s handling of the COVID-19 pandemic was a major issue for Latinos. The Biden campaign has picked up on that in a new round of bilingual ads that recently aired in Arizona. “Maybe we don’t all come from the same place,” begins a new spot called “Somos Todos,” “but we are all human beings.” It shows side-by-side images of Biden and Latinos donning protective masks, holding their children, and praying, hitting on important commonalities among Latinos like family values, work ethic, and finding solace in religion and community during difficult times.

Nonetheless, Biden made his first in-person visit to the state on October 8. Trump, by comparison, has made five stops in Arizona this year.

Trump’s biggest support among Latinos has come from young men. The Equis poll in late August found that 42 percent of young Latino men supported Trump. Compare that with only 16 percent of young Latinas. Even among older men, Trump had the support of 34 percent of those polled. These include men like Dan Cantu, a retired border patrol agent and Mexican American living in southern Arizona. “The problem I have with Democrats,” he told WhoWhatWhy, “is that they will categorize us as one big lump sum, one big unit, and that’s simply not the case.”

In contrast, Republican Latino organizations, Cantu said, don’t rely on the fact that their audience is from a certain group. “I appreciate their efforts to not pander. They just put out regular, issue-based ads that don’t necessarily include references to being Latino.”

Voting-rights activists, on the other hand, say the Democrats don’t do nearly enough to appeal directly to Latinos. They charge that the Democratic Party just assumes that it already has the Latino vote wrapped up.

“The Democratic party thinks of Latinos as a kept electorate,” said Luis Avila, founder of Aqui se Vota, an Arizona-based nonpartisan organization that encourages Latino voting. “But socially, for example, a lot of Latinos voters have a hard time voting Democratic because they’re Catholic and they don’t like topics like abortion or same sex marriage. So, in some ways I think the Latino community is finding itself as a swing vote, and I think Democrats make a huge mistake of taking us for granted and thinking that we are automatically their supporters.”