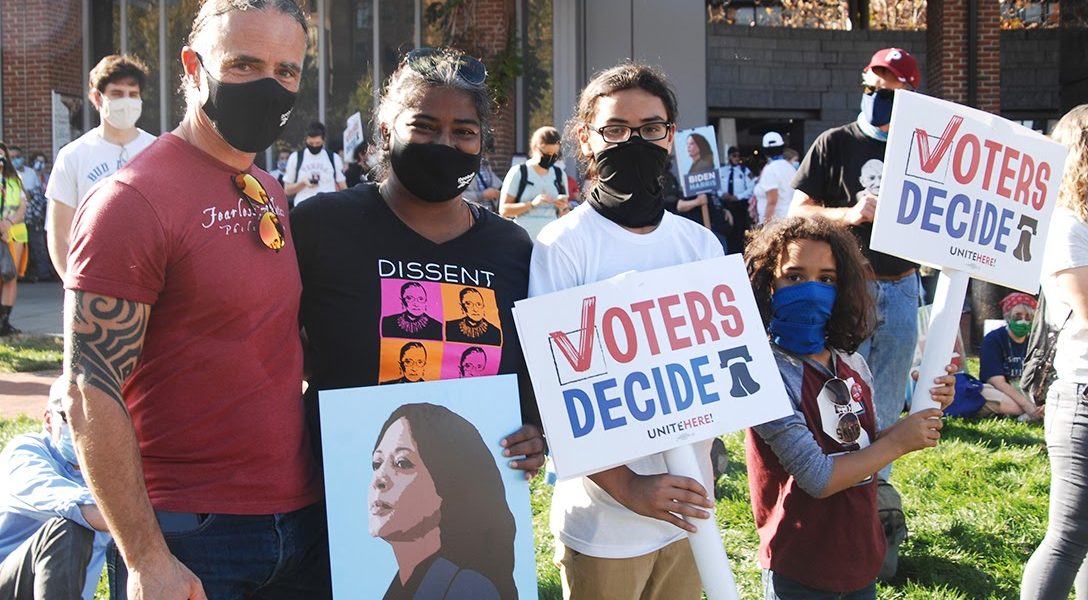 Supporters of Joe Biden gather in front of the Convention Center in Philadelphia on November 5, 2020, as the presidency hinges on results from three states, including Pennsylvania. Photo credit: © Miguel Juarez Lugo/ZUMA Wire
Elections

During the presidential election, the mythical suburban swing voter became the golden fleece. It wasn’t just Donald Trump who was trying to scare white suburban moms into voting for him. The Biden campaign was on the prowl as well for the formerly-Democratic swing voters who had switched their allegiance to Trump in 2016.

But while the suburbs came out, in many places it was the foot soldiers of the progressive left who reached out to people who hadn’t voted before or who had been disengaged. They helped move states like Pennsylvania back to the Democrats’ column and turn Arizona and Georgia blue.

Georgia, which still has two Senate contests in play, has been much written about, giving deserved credit to Stacy Abrams’s Fair Fight and other community organizations led by Black women. These groups have been working for years to bring former nonvoters and victims of voter suppression onto the electoral rolls.

In the Southwest, Living United for Change in Arizona (LUCHA), a social justice-oriented community group, engaged Latinx voters and played an important part in winning the state for the Democrats. And while Pennsylvania has been reliably Democratic for years, except 2016, a state-wide progressive organization, Pennsylvania Stands Up, has been motivating voters in all areas of the state by engaging them on issues like police brutality, immigrants’ rights, and gentrification.

None of this is easy, and like all community organizing, it takes time, sweat, energy, patience, ingenuity, and a focus not on a one-time election but on long-term change. “This didn’t happen overnight, and it’s not just because of demographic change,” said Peter Hogness, co-founder of Water For Grassroots, a New York-based group that has worked with many of these activist community organizations. These groups don’t just sprout up for an election; they are in it for the long haul.

The Biden campaign has been criticized by some observers for failing to reach out to Latinx communities. LUCHA, based in Phoenix, has honed its skills in its community for 10 years. Progress was evident by 2019, when Alejandra Gomez and Tomas Robles Jr., founders of LUCHA and the Arizona Center for Empowerment (ACE) penned an op-ed in the New York Times: “Activists accomplished what was unthinkable in 2010: Arizona is a battleground state in 2020.”

Arizona has been called for Biden, the first Democrat to win the state since Bill Clinton in 1998. Once strongly conservative, Arizona was the home base of Barry Goldwater, the founder of the conservative movement and the 1964 Republican candidate for president. The last Democrat Arizona supported before Clinton was Harry Truman in 1948.

Central to Biden’s win was the work of grassroots community groups of color like LUCHA, part of Mi AZ, a coalition of five progressive community and advocacy groups that led a massive voter campaign. Since July, the coalition’s members made nearly 8 million calls to voters, and, despite the pandemic, knocked on 1.15 million doors to get people out to vote. Latinx turnout rose nearly 20 percent.

“Arizona offers a model of how this energy becomes real electoral power: It happens when people learn to work with one another, build deep connections and create something bigger than themselves.”

LUCHA came together 10 years ago in response to SB 1070, which required law enforcement to ask for proof of legal immigration status from anyone who looked “suspicious,” i.e., Latinx.  Joe Arpaio, the anti-immigrant sheriff of Maricopa County, became the face of that law, rounding up people at traffic stops, in workplace raids, and neighborhood sweeps, then putting them into chain gangs and imprisoning them outside under the blazing sun.

“First there were seven. Then 50. Then thousands of people, mostly Latino and many undocumented, who held a vigil outside the Arizona State Capitol in the spring of 2010, praying that Gov. Jan Brewer would not sign the anti-immigrant bill,” Gomez and Robles wrote, remembering the vigil that sparked their organization. “While it is easy to dismiss mass protests as short-lived eruptions of anger, Arizona offers a model how this energy becomes real electoral power: It happens when people learn to work with one another, build deep connections and create something bigger than themselves.”

Those 10 years haven’t been easy. While the organization registered people to vote, trained new volunteers, and held know-your-rights sessions, Arpaio continued to be elected in elections marked by irregularities. The Maricopa recorder’s office sent out Spanish language fliers with the wrong election day printed on it. Finally in 2016, Arpaio was defeated. A year later, President Trump gave Arpaio a presidential pardon after he was convicted of criminal contempt for continuing to racially profile, despite the law being struck down.

Through their sister organization, the Arizona Center for Empowerment, LUCHA directs a Youth Leadership Academy and offers immigration services — from classes in English to helping people apply for citizenship or reapply for Deferred Action for Childhood Arrivals (DACA), the Obama program that Trump tried to end but which is hanging on by a hair. They also register new voters: some of them were children when the first vigil was held against SB 1070.

They have had victories: The Fair Wages and Healthy Families Act raised the minimum wage from $10.50 to $12 an hour, and starting in 2021 will increase every year to track the rise in the cost of living.

In response to the pandemic, they called for Republican Gov. Doug Ducey to enact “The People’s Bailout,” including passage of 12 weeks of paid family and medical leave, an additional $35 million in a Housing Trust Fund for rental assistance, a pause on student loan payments, and a doubling of unemployment benefits to $500 a week to meet the national average. All of these benefits would apply to both documented and undocumented people.

Although the election is over, LUCHA and other community groups are not going away, “Elections are a marker, but the real work begins after, when we need to ensure that we hold our elected officials accountable, ensure they pass the policies that voters that put them in office want to see,” Robles said.

Pennsylvania had been a reliably blue state until Donald Trump beat Hillary Clinton by 44,000, one of the three Democratic states that swung for him in 2016. This year was different. In 2020, Biden beat Trump by 60,000, though votes are still being counted.

Part of the reason is Pennsylvania Stands Up, an organization formed this year with nine chapters throughout the state, with names like Reclaim Philadelphia, Capital Region Stands Up,  York Stands Up, and Lehigh Valley Stands Up. “The time is ripe for everyday Pennsylvanians — urban and rural, white, black, and brown — to bust back into politics to reclaim our democracy,” it declares on its website.

But the statewide organization got its start with Lancaster County Stands Up, focusing on rural Lancaster County, which came together after the 2016 election exactly four years ago.

Lancaster County is notably Republican. It only voted for a Democratic presidential candidate twice: When Lyndon Johnson won by 798 votes, and when James Buchanan, a native son, won the presidency in 1856. Lancaster County is overwhelmingly white — over 80 percent — though the city of Lancaster, the county seat of 60,000, is much more diverse: 39 percent Hispanic, 14 percent Black, 4 percent Asian, and 40 percent white.

Eliza Booth, who is Black, was born and raised in Lancaster. “I was always interested in politics,” she said. “I couldn’t wait until I could vote. My mom took us to vote with her — and told us this is your civic duty. I figured if I could vote I could participate. I didn’t realize then that there is way more to do. Voting is just one thing.”

“We know it’s an uphill battle. We have made some small inroads. We’re in it for the long haul.”

But she wasn’t much involved with anything until she heard Bernie Sanders speak during the 2016 Democratic Primary: “He talked about the power that corporations had, flooding the elections with money. It just clicked.” She began knocking on doors talking with people about how to make their community better and that voting is not enough. “You have to engage with your government if you want things to change.”

She voted for Hillary Clinton and said she was shocked when Clinton didn’t win. A couple of weeks later, she went to a local meeting to talk about the results of the election. “I thought there might be 20 people there,” she said. “Three hundred people showed up.”

That was when Lancaster Stands Up was formed. Booth is now one of three full-time organizers for the member-led organization. Over the past four years, they have worked on a variety of issues, including protesting Trump’s Muslim ban, the killing of George Floyd, and the local police killing of Ricardo Munoz, a 27-year-old autistic man. They established the Lancaster Neighbor Fund to help immigrant families whose breadwinners have been swept up by ICE raids, which have increased 60 percent in one year.

Since the pandemic, they have been holding a weekly Zoom “Troublemakers Café,” to stay connected, hear what is on people’s minds, and keep them informed about what is happening in their neighborhoods. One week the focus was on the local, publicly owned electric utility turning off service to people who could not pay their bills because they had been laid off due to the pandemic.

The municipality of Lancaster owns the electric utility, and it began shut-offs to customers who couldn’t pay their bills. Lancaster Stands Up demonstrated at the municipal council meeting.

“Turning off electricity in the middle of a pandemic where [there] is massive unemployment is immoral,” Susanna Wurtz, of Northern End Stands Up, a local chapter of Lancaster Stands Up, told a crowd outside of the council meeting.

The Council at first refused to reverse its decision to start the shut-offs, but later it said it would work with a local nonprofit, Community Action Partnership of Lancaster County, which began offering support for customers who couldn’t pay their bills.

For the 2020 election, Lancaster Stands Up endorsed and worked with seven Democratic candidates for the state Senate and House. They all lost, as did Biden in Lancaster County.

For Booth, it was disappointing but not surprising, considering that in previous elections Republican candidates had often run unopposed.

When asked about the losing numbers, Booth was neither shocked or put off. She said that Trump, Vice President Mike Pence, First Lady Melania Trump, and Ivanka Trump all campaigned in Lancaster County the last week before the election. “It gave me a little pride that we had amassed power,” she said. “It was a response to what we had done. That’s why Republicans put up so much money in our area.”

Booth and Lancaster Stands Up, like LUCHA, take a long view. Twenty percent more people came out to vote than in past years, and Biden improved on Clinton’s vote by 3.4 percent. They are proud of the slow and steady change.

“But here’s the thing,” said Booth, “[in the past] people would organize for an election and then go away. From the very beginning, we talked about [how] we are involved with issue-based work — Black Lives Matter, affordable housing and gentrification. … Losing stats — that’s not our final end game.

“We know it’s an uphill battle. We have made some small inroads. We’re in it for the long haul. We want to see [a] Lancaster that is a better community for raising our kids — that includes all of us.”