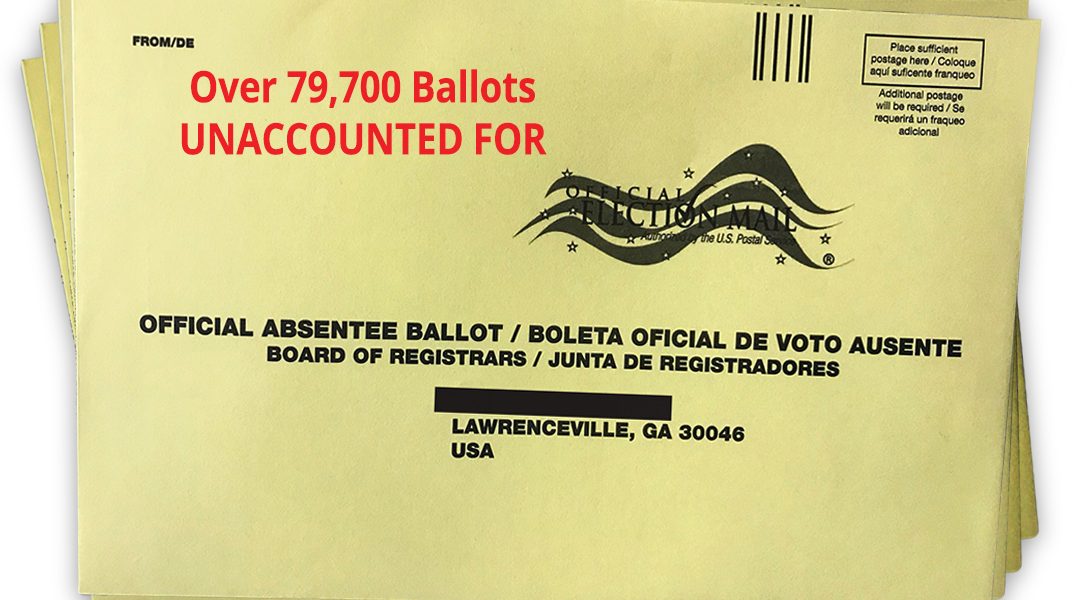 When polls opened on Election Day, 79,784 Georgians who requested an absentee, mail-in ballot had not returned their ballot and have not voted early. WhoWhatWhy’s exclusive reporting allows those voters to check the status of their votes while there’s just enough time to still get to the polls.

Among all voters who have been issued a ballot but have not yet voted, 44.1 percent are black, 36.6 percent are white, and 5.4 percent are Asian or Pacific Islander.

Of that total, 2,630 mail-in ballots have been rejected — often for minor technical issues — and the affected voters have not yet been able to cast a new ballot.

The problem of counties rejecting mail-in ballots may be — and almost certainly is — much worse than we know.

To put all this into perspective, Geoff Duncan won the statewide Republican runoff for lieutenant governor on July 24 by 1,597 votes. Statewide races can be razor-thin, and at least three statewide races are projected to be decided by the smallest of margins, if they’re decided at all today.

The governor’s race and the secretary of state race could go to runoffs in December.

Local races are often even closer. The Republican primary for Georgia House District 28 will get a do-over on December 4. That race was decided by 67 votes — out of 6,155 cast — because the election was found to have more incorrectly cast ballots than the margin of victory.

After WhoWhatWhy reported that Gwinnett County — and Georgia as a whole — were rejecting mail-in, absentee ballots by the thousands for trivial reasons, the ACLU and the Coalition for Good Governance sued the county and state governments to make sure those votes were counted.

The lawsuits achieved a very narrow victory. District Court Judge Leigh May ruled that Gwinnett and every other county in the state had to accept ballots that had mismatched signatures. To-date in this election, only 166 of 3,686 mail-in ballots were rejected because of signature mismatches.

In Georgia, voters sign the outside of the envelopes containing their ballots as a way to prove they really are the ones voting. It’s the mail-in-ballot version of showing ID at the polls.

The problem is that signatures change. Elderly and disabled voters make up 16.6 percent of all people who have had a ballot rejected, and 22 percent of those were rejected for signature mismatches. Voters with acute injuries, or even voters who changed their signature for cosmetic reasons, can also be rejected. And, according to Gwinnett County elections deputy director Kristi Royston, about half of all new voter registrations are done at the DMV — with the electronic pen pad — putting signatures on record that can be wildly different than when putting a regular pen to paper.

This year, early voting totals far outpaced previous midterm elections, setting records for turnout. That excitement was reflected in the number of people who voted by mail-in ballot, too. This may have been bolstered by the idea that a mail-in ballot creates a paper trail for ballots, allowing them to be audited. Georgia’s electronic voting machines cannot be audited and the state’s voting system is famously vulnerable to any number of cyberattacks.

A simple way to see the excitement is by graphing the number of requests for mail-in ballots in 2018, as compared to another midterm year, 2014.

It’s easy to see that excitement for mail-in ballots remained high right up until the end of last week. The problem is that counties have to process the applications and send out ballots.

Even with first-class mail, that can take up to three days in some areas. The voters then need to fill out their ballots and return them. Voters can return a ballot in person, but voters who mail ballots back in the last week before Election Day are running the risk of the envelopes not arriving on time — and therefore not having their votes counted.

As Georgia has seen in every election with mail-in ballots, the majority of ballots that get rejected are thrown out because they are not returned on time. Mailed ballots must be delivered by 7:00 PM on Election Day. Postmarks don’t count.

On the surface, neither counties nor the Georgia government are at fault. But it has happened year after year, election after election, and there is every indication that — once again — thousands of ballots will be rejected for not arriving on time.

The question is, where should the burden rest: on the county and state governments to run elections that make casting a ballot easy, or on voters to know the intricacies of voting law?

Data analysis and graphics produced by Noah Haber, a postdoctoral researcher at the Carolina Population Center at the University of North Carolina at Chapel Hill.

Update 11/8/2018: Read here to learn how WhoWhatWhy made the look-up table at the top of this article.