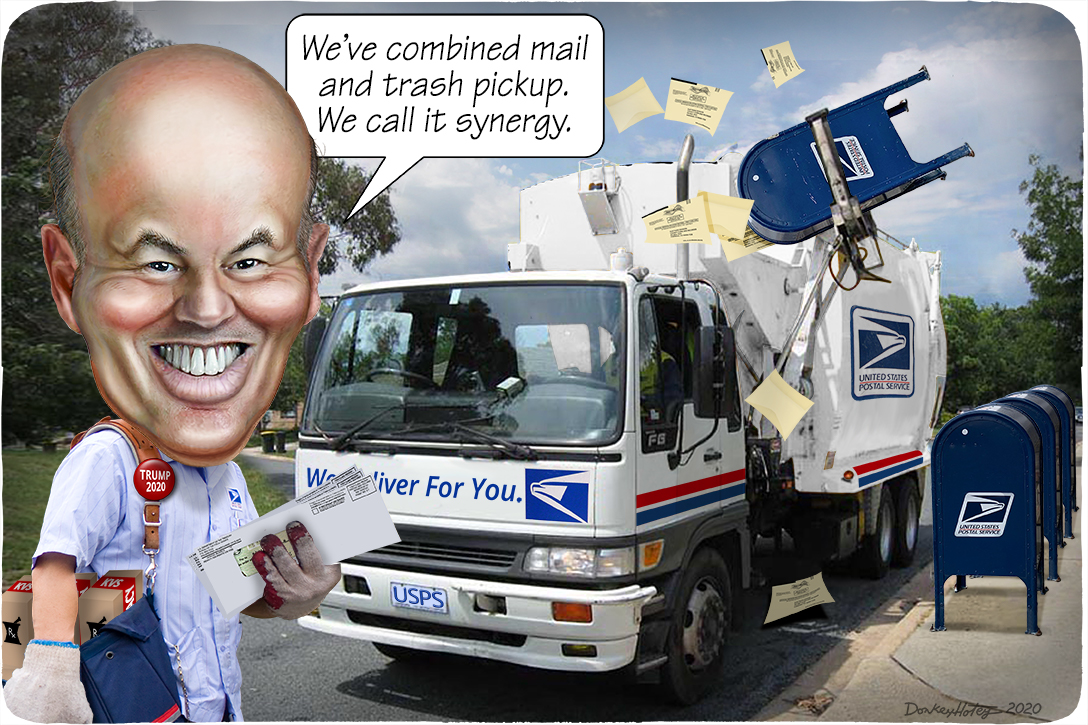 I don't know anyone who depends on the Postal Service to deliver checks or prescription drugs. So this should work out fine. Photo credit: DonkeyHotey / WhoWhatWhy (CC BY-SA 2.0) See complete attribution below.
Cartoon Elections Opinion

An Attempted Coup in Slow Motion

Why does the Republican Party hate the US Postal Service with such damning intensity? The answer, of course, is that it doesn’t. What Republicans, and more specifically, Donald Trump, really hate is the idea of losing the election in November. The US Postal Service is merely collateral damage in a concerted plan that depends on considerable amounts of voter suppression. Attacking the Postal Service, in fact, is only the most visible part of a three-pronged strategy that Republicans hope will enable them to win another four years in office.

That strategy is based on the theory that poor voter turnout usually benefits the incumbent; in this election, it may be the Republicans’ only hope. Besides the benefits from a low turnout, there is added advantage to Republicans in making it difficult for minorities to vote.

Three elements are likely to have an outsized influence on the November election. The first is the coronavirus pandemic itself. With more than 175,000 Americans already dead from the novel coronavirus, it is clear that anyone who goes to a polling place to cast his or her ballot in person risks becoming infected and possibly death.

You may be fully convinced that Donald Trump is one of the worst presidents in American history, but is denying him a second term really worth dying for? For anyone past the age of 50, it is a serious question.

The second factor that can be expected to influence the election is a sudden scarcity of polling places where it is actually possible to cast a ballot in person. The pandemic and the vulnerability of older polling staff provide perfect camouflage for drastically reducing the number of polling places and also for being highly selective in deciding where they should be located.

The third and final part of the strategy is to block access to voting by mail, the only option that would allow voters to cast their ballots without risk of catching the virus.

What Republican strategists hope for is a perfect storm in which these three elements come together to provide just enough leverage to enable Donald Trump to squeak across the finish line.

Victory, in short, depends on ensuring that if voters want to cast their ballots, they will have no way of avoiding exposure to the coronavirus and the possibility of an agonizing death. The more the pandemic spreads, the greater the effect. And all of that is not taking into account what will happen if the seasonal flu is added to the death toll, which could well be above 200,000 by November.

Will the strategy work? It is already proven that it can be surprisingly effective. As of last March, the pandemic had already managed to sharply reduce the number of people registering to vote.

Reducing access to polling places has long been a favorite tactic when it comes to suppressing the vote. The pandemic acts as a get-out-of-jail-free card.

A number of election commissions across the country have also let it be known that they will very likely make sharp reductions in the number of available polling places in November. One of the most extreme examples of what this can mean occurred during a recent primary election in Milwaukee, WI. Normally the city operates 180 polling places. In the primary, only five of the original 180 were open.

When asked why, election officials said that they were unable to recruit enough staff to meet the demand and that, in any case, it was too dangerous to make more available. Retirees and older workers who are normally hired to run the polling sites were frightened away by the pandemic, but even if they had not been frightened away, we probably would never have known since the decision was made by an election commission behind closed doors.

Reducing access to polling places has long been a favorite tactic when it comes to suppressing the vote. The pandemic acts as a get-out-of-jail-free card. Anyone who doubts that only has to read a 2019 report by the Leadership Conference on Civil and Human Rights, which noted that Southern states with a past history of racial discrimination closed nearly 1,200 traditional polling places between 2014 and 2018 after the Supreme Court relaxed rules in 2013 that had previously protected minorities from voter suppression.

Given what is at stake, there are obvious advantages for Republicans in disabling the most likely way of avoiding a doomsday scenario: the US Postal Service. The candidate apparently chosen to carry out this Mission Impossible was none other than one of the key leaders of Trump’s re-election campaign, Louis DeJoy.

A party apparatchik and Trump donor, DeJoy has no qualifications to run the Postal Service, but, after running a company that competed with the US mail, he does have enough knowledge to discreetly dismantle the system, eliminating it as a safe alternative to exposing oneself to a proven killer.

After angry protesters laid a noisy siege to DeJoy’s residence and Nancy Pelosi decided to call the House of Representatives back from its summer recess, DeJoy promptly announced that he had put an end to the sabotage. The question, of course, is whether he has already succeeded in doing enough damage to render the option of voting by mail no longer viable.

The difference may be only a few percentage points in the final vote, but in a closely matched election that can be enough to swing an election. Donald Trump lost the popular vote — that is, the vote representing all Americans — by nearly three million ballots in 2016. He still managed to be elected president because of the eccentric way in which the Electoral College functions. In fact, most elections are not decided by millions of votes. It is usually only a hundred thousand or so ballots in key swing states that actually make a difference.

It doesn’t matter to Trump that he votes by mail himself, or that members of the military have mailed in absentee ballots for decades, or that several states have transitioned almost completely to voting by mail.

Elections have been hotly contested in the past, but what has held the country together for more than two centuries has been a broad agreement to maintain a certain sense of decorum and fairness. The system works when everyone plays by the rules and generally agrees that the purpose of the political process is to arrive at solutions which are ultimately in the best interest of the country.

What makes the current administration different is the readiness of the band that has surrounded Trump to throw most of that tradition out the window.

The deviousness in Trump’s strategy goes further than simply sabotaging the Postal Service.  After mounting a relentless scare campaign insisting (contrary to all available evidence) that voting by mail would open the floodgates to fraud, he may be hoping to save himself by launching a barrage of lawsuits if there is any delay in counting the votes. It doesn’t matter to Trump that he votes by mail himself, or that members of the military have mailed in absentee ballots for decades, or that several states have transitioned almost completely to voting by mail. There have been no significant incidents of fraud in all this time, but that has not daunted Trump’s anti-postal campaign.

Trump is understandably desperate, and we have become accustomed to hearing him make declarations that are patently untrue — or as his defenders like to put it, hyperbolically rhetorical. Relying on the Department of Justice to overturn election results by launching a series of lawsuits may be a bit like gambling in roulette, but Senate Majority Leader Mitch McConnell has spent the last three years stacking the court system with Trump appointees, and that just might be enough to challenge results.

Other effects of the Republican strategy are more subtle. In Philadelphia, for example, the city has announced that it will install drop boxes for ballots in strategic locations including city hall.  Anyone who has a car, or can reach the designated locations, can simply drop their ballot in one of the boxes, which will be kept under constant guard.

For upper-middle-class white voters who live in the center of the city, that is hardly a problem. For the largely Black and Hispanic residents pushed into poorer housing at the outskirts of the city, it may be a different story, especially if no effort is made to provide facilities in their neighborhoods.

The Postal Service, which the founding fathers thought important enough to include in the Constitution, is just another casualty in what looks very much like a brutal coup being carried out in slow motion.

Voter suppression often depends on changing the playing field and counting on inertia to do the job. Strategically choosing the locations of voting facilities, in short, is a relatively easy way to suppress voter turnout, especially if there is a segment of the population that you would rather not have voting at all.

But something larger is going on here. Donald Trump may have a genuine bromance with Vladimir Putin and the Russian plutocracy, but he has made it abundantly clear that he has no respect at all for Congress or the American system of government. It is this American system of government, the system hammered out in the US Constitution and more than two centuries of trial and error, that Donald Trump really intends to destroy.

Trump is not alone in wanting to dispense with America’s idea of democracy. When McConnell refused to acknowledge the Constitution and blocked the nomination of Merrick Garland to the Supreme Court, he effectively announced that he is on board when it comes to overturning the rules of the game. Politics, as McConnell sees it, is a take-no-prisoners, anything-goes form of warfare. Having succeeded in destroying the equilibrium of the US Supreme Court, McConnell raced to pack the judicial system that he had previously stonewalled for eight years, with as many judges known to be Trump supporters as he could.

The Postal Service, which the founding fathers thought important enough to include in the Constitution, is just another casualty in what looks very much like a brutal coup being carried out in slow motion. Louis DeJoy may go down in history as the assassin of the US Postal Service, but chances are that he will be forgotten fairly quickly. What is happening here is really a battle for the soul of America.

It is worth remembering that our forefathers faced dangers that were just as daunting as those we face now. Our actions in the next 72 days will determine if we are up to the challenge.