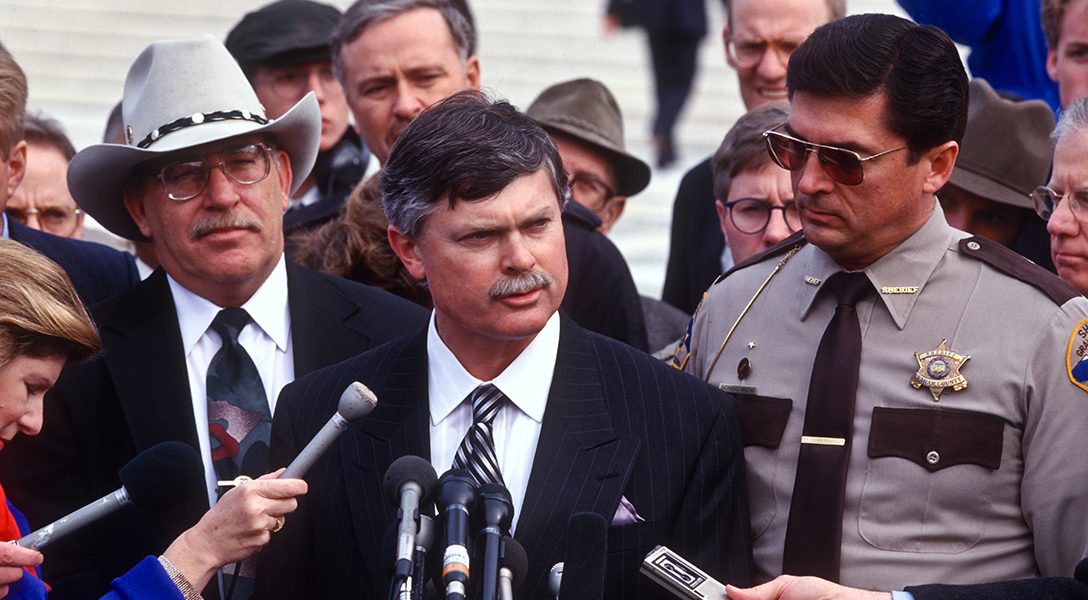 The name for this new tactic is “nullification,” and the localities that are practicing it are calling themselves “Second Amendment sanctuaries” — a tactic that, ironically, was partly inspired by efforts to establish immigration and marijuana sanctuaries.

In some cases, county sheriffs have publicly said they will not enforce the new laws. This has happened in at least six states: Nevada, New Mexico, Washington, Colorado, Oregon, and Illinois.

In Washington, sheriffs in more than half of the counties have refused to enforce new gun regulations. One, Bob Songer of Klickitat County, has gone even further — saying he might prevent state and federal police from enforcing them.

In Nevada, one sheriff who recently refused to enforce a new gun law wrote a letter to the governor likening the measure to Hitler’s gun policies.

In other places, such as Weld County, CO, county or town councils have passed resolutions defying new gun restrictions. And gun rights advocates in some of these states, such as New Mexico, are also pushing for ballot initiatives designed to overturn new gun laws.

In most cases, county officials adopting these tactics serve in rural, mainly Republican areas of states run by Democrats.

Kevin Starrett of the Oregon Firearms Federation told WhoWhatWhy that these laws “are being passed by urban liberals who have the numbers.”

“This is done with no regard for gun owners and in fact an outright disdain for rural residents,” he wrote in an email.

Many advocates of these tactics have an absolutist view of an American’s right to gun ownership. That definitely applies to Starrett’s group, which bills itself as “Oregon’s Only No Compromise Gun Rights Organization.” Asked what specific gun laws his organization objects to, Starrett replied, “Not to sound snarky, because I don’t mean to, but we object to all of them.”

A Brief History of Nullification

These nullification efforts are not new; what is new is the increasing number of local officials adopting these tactics. Some previous efforts date back to 2012 and 2013, when massacres in Newtown, CT, and Aurora, CO, prompted lawmakers in those states and others to push for stricter gun control measures.

In response to such efforts, Sheriff John Cooke of Weld County, CO, refused to enforce new restrictions passed in 2013, and two sheriffs in the state of New York did the same in 2012.

But it was another case that got prominent national attention: In 2013, Nick Finch, former sheriff of Liberty County, FL, refused to prosecute Floyd Parrish, a man Finch’s own deputies had arrested for carrying a concealed pistol without a permit.

Finch was suspended from office without pay by then-governor Rick Scott, and prosecuted on charges of official misconduct for allegedly tampering with records related to Parrish’s arrest. Although Finch was eventually acquitted of these charges, his career as sheriff was short-lived.

Parrish, the man Finch released from custody, would go on to be charged with murder in 2016. Currently awaiting trial, Parrish claims self-defense under the state’s stand-your-ground law.

That murder charge dealt a fatal blow to Finch’s reelection. He lost, getting only six percent of the vote, and now works as a truck driver.

One key figure in the publicity of the Finch case was Richard Mack, a former sheriff of Graham County, AZ, and the author of From My Cold Dead Fingers: Why America Needs Guns. Soon after Mack stepped forward to voice his support for Finch, Alex Jones of Infowars took up his conspiratorial bullhorn, and Finch quickly became a cause célèbre of the alt-right and far-right media.

Mack stands at the center of this growing nullification movement, and the Constitutional Sheriffs and Peace Officers Association (CSPOA), an organization Mack founded and leads, has provided training seminars for more than 450 current and former sheriffs around the country.

Its membership has included former sheriffs Joe Arpaio of Maricopa County, AZ, and David Clarke, of Milwaukee County, WI, as well as many if not most of the sheriffs across the country currently refusing to enforce new gun restrictions.

Like Starrett in Oregon, Mack starts from a completely uncompromising understanding of the Second Amendment, which he sums up like this: “Gun control in America is against the law.”

“I don’t need anybody to interpret for me ‘shall not be infringed,'” he told WhoWhatWhy.

Mack came to national prominence in 1994, when, as sheriff, he sued the federal government over the Brady Handgun Violence Prevention Act of 1993, and won. That case — combined with a similar challenge by a Montana sheriff and backed by legal help from the NRA — took issue with a Brady law provision that required background checks on gun purchasers. That provision was struck down in 1997 on the basis of the 10th Amendment in a 5–4 decision written by Justice Antonin Scalia.

Although this victory was a minor one — it became moot once the FBI’s computerized National Instant Criminal Background Check System went online in 1998 — Mack found a national platform.

While Mack would go on to run unsuccessfully for several offices, his greatest success has been the creation of the CSPOA.

Mack says, if he could do it all over again, he wouldn’t have bothered suing the federal government. Instead, he told WhoWhatWhy, he’d do what he now advises sheriffs all over the country to do: simply refuse to enforce the law. Mack doesn’t see this act of non-enforcement as unusual. “Police have never enforced all laws. That is an absolutely ridiculous notion,” he said. “It’s called police discretion.”

Mack has been a popular speaker not only for the NRA, but also for the John Birch Society as well as various Tea Party organizations. And he previously served on the board of the Oath Keepers, a group of “current and formerly serving military, police, and first responders.” They pledge allegiance to the US Constitution and “not to the politicians” — and they vow to “not obey unconstitutional orders.”

Mack said he was deeply influenced by a speech he attended in 1984 delivered by W. Cleon Skousen, author of The Naked Communist, a 1958 book alleging an international communist conspiracy for world domination.

A 2015 Center for Public Integrity investigation noted similarities between the philosophy of Mack’s movement and that of “Posse Comitatus,” a movement which came to prominence in the 1970s and 80s, as well as the “sovereign citizen movement,” which the FBI considers a domestic terrorist group. Oklahoma bomber Terry Nichols was a member.

Posse Comitatus, partly inspired by the white-power writings of the Rev. William Potter Gale of the Christian Identity movement, has been called “explicitly racist” and “anti-Semitic” by the Southern Poverty Law Center (SPLC). The SPLC also points to one specific ideological connection between Mack and these groups: “Posse comitatus” is Latin for “power of the county,” and the group that bears this name holds that “the highest authority of government in our Republic” is invested at the county level. Thus, according to this thinking, county sheriffs are the highest law enforcement authorities in the country — exactly what Mack and many Second Amendment sanctuary proponents believe as well.

Mack, however, disavows any connection with Posse Comitatus or the sovereign citizen movement, and said he’d never heard of William Potter Gale. Mack repeatedly emphasized in an interview with WhoWhatWhy that he and his organization are neither racist nor violent. On the contrary, the CSPOA aims to eliminate racism and prevent violence, he said. But he did acknowledge that the members of Posse Comitatus or sovereign citizen groups could very well attend CSPOA functions or seminars since these meetings are open to anyone.

However, one area of potential ideological overlap — immigration — is apparent on the CSPOA’s own website, which asserts, without providing evidence, that “immigrants are not assimilating into our culture as they once did” which “results in devastating consequences culturally and economically.” This CSPOA position statement goes on to recommend that “National Guard and regular military troops” be stationed “on our southern border immediately to close off the flood,” among a litany of other hard-line immigration enforcement suggestions.

“Bluster”? Or “Changing America, One County at at Time”?

Robert Spitzer, a political science professor at the State University of New York at Cortland and an expert on the history of American gun laws, told WhoWhatWhy that the general idea of gun law nullification “has been floating around for a while,” but “this current movement takes it one step further [by] crossing the line of legality and picking and choosing which laws they want to enforce.”

“Quite frankly it’s not their call, and it’s an abuse of their authority, and I would say political position,” he said.

The only direct historical analogy, he said, is the way that sheriffs handled law enforcement in the western states during the 19th century — “semi-autonomously.”

“I think that kind of stuff mostly disappeared by the start of the 20th century,” he said.

Spitzer attributed the growth of the nullification movement to politics and the fact that many county sheriffs are elected to office. Many of these sheriffs are playing to deeply conservative constituencies, which leads them to take these largely symbolic positions, he said. Spitzer pointed to the example of New York state, where two county sheriffs refused in 2012 to enforce new gun restrictions, whereas state police, who are non-political state employees, wrote a brief in support of the restrictions.

Yet much of the current rhetoric about gun law nullification is “bluster, by and large,” Spitzer said, since he hasn’t yet seen  these local officials getting into direct conflict with state or federal authorities.

The attorney general of Washington, however, has warned the refuseniks in his state about the potential consequences of their actions. In an open letter, Attorney General Bob Ferguson told these sheriffs that they “could be held liable if there is a sale or transfer of a firearm to a dangerous individual prohibited from possessing a firearm and that individual uses that firearm to do harm.”

Mack, meanwhile, continues his evangelism for his reading of the Second Amendment and county sovereignty, and he’s optimistic about the future. In the past, the CSPOA was mainly concerned about increasing its membership. These days, he said, it’s “focused on changing behavior, and changing America, one county at a time.”