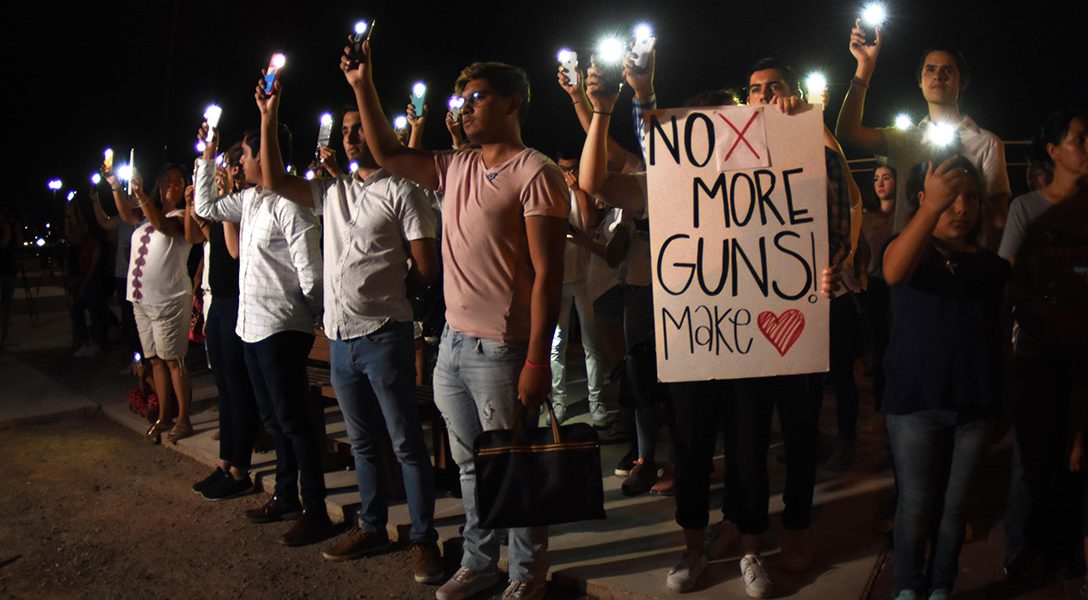 Dozens of people pray at the US-Mexico border on August 3, 2019, after the mass shooting in a shopping center in El Paso, Texas. Photo credit: © Rey Jauregui/EFE via ZUMA Press
Criminal Justice Government Integrity

Just a few weeks after the devastating shooting in El Paso, Democrats in the Florida House of Representatives have called for a special session to deal with the issue of gun control — and they think the votes could be there to finally see action by state lawmakers to address mass shootings.

State Rep. Anna Eskamani (D-Orlando) is one of them. When she first heard about the August 3 mass shooting at a Walmart in El Paso that had left 22 people dead and another 24 injured, she decided to do something about it.

A week after the massacre, Eskamani helped organize a rally in front of Orlando City Hall to protest the shooting and other instances of gun violence, white nationalism, and a lack of progress on gun control measures.

She told WhoWhatWhy that it felt painfully similar to the incident on June 12, 2016, when a gunman killed 49 people and wounded 53 others in a mass shooting inside Pulse, a gay nightclub in downtown Orlando.

Nothing happened to change gun laws back then, she said, but this time it feels different. Now residents are getting louder in demanding action.

“In our cities and communities across Central Florida in particular, we already had that energy when Pulse happened,” Eskamani said. “No action was taken after Pulse, and you can’t ignore that. That’s not okay.”

But in Florida at least, Democrats sense a new political and legislative shift on gun safety issues, in a legislature that has traditionally been strongly supportive of the concept of gun rights and of gun ownership.

New developments this week indicate that their optimism may be warranted.

Democrats in the House have called for a special session to vote on expanded background checks, and a ban on high-capacity ammunition magazines. And, according to the Sun Sentinel, three-fifths of the Republican-controlled House has agreed to that special session.

“Recent events in El Paso, Texas, and Dayton, Ohio, serve as a stark reminder of the inadequate measures taken to date to safeguard our citizenry against similar gun-related violence via the passage of common sense gun-reform proposals,” the letter said. “The targeted killing of Hispanic/Latino citizens by a domestic terrorist in El Paso, Texas, should compel us to take immediate action to safeguard Florida’s residents, including more than 4 million Hispanic/Latino residents.”

Americans Largely Support Gun Restrictions to ‘Do Something’ About Gun Violence

How America Fell Out of Love With Machine Guns

State Rep. Javier Fernández (D-South Miami), spearheaded the move, and issued a statement on Tuesday noting that Floridians “deserve a legislature who will do all it can to protect them. It’s too late for those impacted by gun violence yesterday, but if we act quickly we can stem this tide and save lives.” Democrats also asked for a special session on gun control in 2016 after the Pulse shooting, but then-Governor Rick Scott (R) rejected the idea.

State Sen. Linda Stewart (D-Orlando) believes much has changed since then. She noted that support for banning military-style assault weapons is getting stronger in the Florida Senate, even though Republicans are in the majority there.

“We’re only looking at three types of military assault weapons to ban — not every rifle, not every gun, just the military-style assault weapons,” Stewart told WhoWhatWhy. “Eighty percent of my constituents believe in what I’m doing and have since I’ve been in office — ‘Keep it up, keep fighting,’ they tell me. I think that there’s a realization now that even after nothing happened after Pulse and Stoneman Douglas and all the prior mass shootings, it seems like the conversation has changed people, and they know we need to do something. It’s a turning point, and it seems like it took them an awfully long time for this to happen.”

In El Paso, the massacre appears to have prompted a different reaction: a sharp rise in gun sales in that city.

According to the Mercury News, the number of people who have signed up for concealed weapons classes has skyrocketed since the shooting, and by far the largest number of people attending the classes are Latino, the group deliberately attacked by the gunman. The general manager of Gun Central, one of the largest gun shops in El Paso, has seen his store double the usual number of sales in the week following the attack.

In Florida, though, there have been no reports of a significant increase in gun sales in the aftermath of either Pulse or the shooting on February 14, 2018, at Marjory Stoneman Douglas High School in Parkland, which killed 17 students and staff members and injured 17 others. The residents of Orlando have reacted differently to the news of the mass shootings in El Paso and also in Dayton, OH, on August 4.

Instead of higher gun sales, the response came in the form of rallies and a new, concerted push to take action legislatively. And for many in the Orlando area, the fact that those targeted in El Paso were Latino brought back painful memories of the Pulse shooting, wherein many of the victims were also Hispanic.

Stewart, the Democratc legislator from Orlando, told WhoWhatWhy that, since Florida has experienced similar mass shootings at Pulse and Stoneman Douglas, the El Paso and Dayton massacres have only strengthened their argument in favor of stronger gun control measures in the Sunshine State.

In addition to tighter background checks and the ban on assault magazines, she’s also pushing for more funding for state and local courts so judges can take on new cases, where they determine if someone with a history of mental illness should no longer be allowed to own a gun.

“Now the reaction that we get with every mass shooting is ‘I told you so, you need to be banning these assault weapons and having universal background checks,’” she said. “We’re adamant that this has to happen. We’ve seen this year after year, and massacre after massacre.

“There’s a heightened appeal now, because this is becoming more pronounced nationally,” Stewart said. “We’re so used to this in the Central Florida area, where we push, push, push and then nothing happens, and you just have a great disappointment. But we are going to use this as an opportunity.”

Eskamani agreed that something has changed.

“We’ve seen a lot of rallies now, people coming together to demand common sense gun legislation,” she said. “Our office actually facilitated the vigil in Orlando on Friday (August 9) with calls for gun legislation, and we also spoke out against white supremacy. We’re doing our part to be sure we have a shared voice on this issue. We’re doing our part to highlight every element of gun violence that our families have had to endure since Pulse. People are fed up with thoughts and prayers.”

Now, more people are contacting her office to find out what they can do to push for stronger gun control measures in the Florida legislature, she said.

“That’s the energy we’ve seen on the ground in the greater Orlando area,” Eskamani said.

At the same time, guns are not the only issue, Eskamani added. The focus is also on white nationalism, since the shooting in El Paso was committed by a 21-year-old white nationalist who had published an anti-immigrant manifesto on his social media page

“Today [August 13] we actually filed a resolution [in the Florida House] against white supremacy and white nationalism, and our resolution includes the most recent shootings,” Eskamani said.

The white nationalist manifesto associated with the El Paso massacre may also be contributing to the shifting dialogue on gun issues in Florida.

“What’s been interesting is because of that manifesto that the shooter posted, that really shook a lot of my colleagues” in the Florida legislature, Eskamani said. The Florida House of Representatives is also controlled by Republicans.

“Because of that manifesto, folks are forced to take it seriously now, and put themselves in the shoes of people of color,” Eskamani said. “It’s the moment when people started realizing the danger of their rhetoric and how we have to realize these issues are intersectional and they don’t exist in silos.”

So is Florida — a state that has long promoted gun rights over state regulation of guns — now ready for stricter gun control?

“I am hopeful we can find some common ground,” Eskamani said. “It does remain an uphill battle, and it must be people driven.”

And on that count, she added, the residents of Orlando are helping to drive the narrative.