KYIV, UKRAINE – It’s 9:30 on a Monday morning in Kyiv, on the eastern shore of the Dnieper River. Next to a recently bombed-out building, Anna Myroniuk is deep in conversation with a group of street cleaners in reflective work vests.

Myroniuk, a  27-year-old reporter for The Kyiv Independent, acknowledges me with a nod, then continues interviewing one of the workers. Leaning on her broom, the worker explains how instead of an alarm clock, Russian artillery barrages have come to awaken her most mornings.

The interview ends. Myroniuk thanks the workers in Ukrainian before coming over to shake my hand.

“They’re the people working for the city utility company,” she says in perfect English, gesturing towards the workers who are sweeping away debris littering the grounds around the building. “Basically, I’m writing a story on how they keep Kyiv clean and nice despite the constant shelling.”

Myroniuk is the head of investigations at The Kyiv Independent, Ukraine’s only English-language media outlet.

Since the beginning of Russia’s invasion of Ukraine, the Independent and its Telegram and Twitter accounts have quickly become leading sources of information on the war for English speakers. The 30-person editorial team has been providing hourly updates on the evolution of the conflict and its rising death toll, as well as conducting investigative work, including on alleged Russian war crimes in the country.

Launched in January by the former editorial staff of the Kyiv Post after their dismissal on November 8, 2021 by owner Adnan Kivan, a real-estate developer who was allegedly meddling in editorial matters, The Independent is also worker-owned: Myroniuk is a co-founder and co-owner, as are most members of the Independent’s editorial team.

Characterized as a “revolution” meant to reclaim editorial independence from Kivan, the digital-only outlet relies primarily on donations from readers: As of today, the crowdfunding effort on GoFundMe to “Keep the Kyiv Independent running” has gathered £1,467,150 (almost $2 million), well over its initial £1,200,000 ($1.5 million) goal.

Before the war, Myroniuk had covered stories such as illegal Chinese tobacco smuggling into Ukraine and Philip Morris’s attempts to use the COVID-19 pandemic to improve its public image.

Since the beginning of Russia’s invasion of Ukraine a month ago, she’s taken on additional duties: reporting on the missile strikes in Kyiv, the work of volunteers to supply the army, and the death of civilians allegedly targeted by the Russian army.

“It’s not frontline reporting with the military, but it’s also important,” she said, as she checked her phone.

As the war drags on, the media’s reach has grown exponentially: On February 27, The Kyiv Independent hit the one-million-follower mark on Twitter, from roughly 20,000 only a week prior to the invasion. Its Telegram channel now has a little over 52,000 subscribers.

As we walk around the block, we see an elderly woman hunched over a flower bed, cautiously picking up shards of glass that had showered the surroundings of her building. Anna stops to snap a couple of pictures. “I’m not a photographer by trade, I’m kind of learning as I go along,” she says, examining each shot on her digital camera. 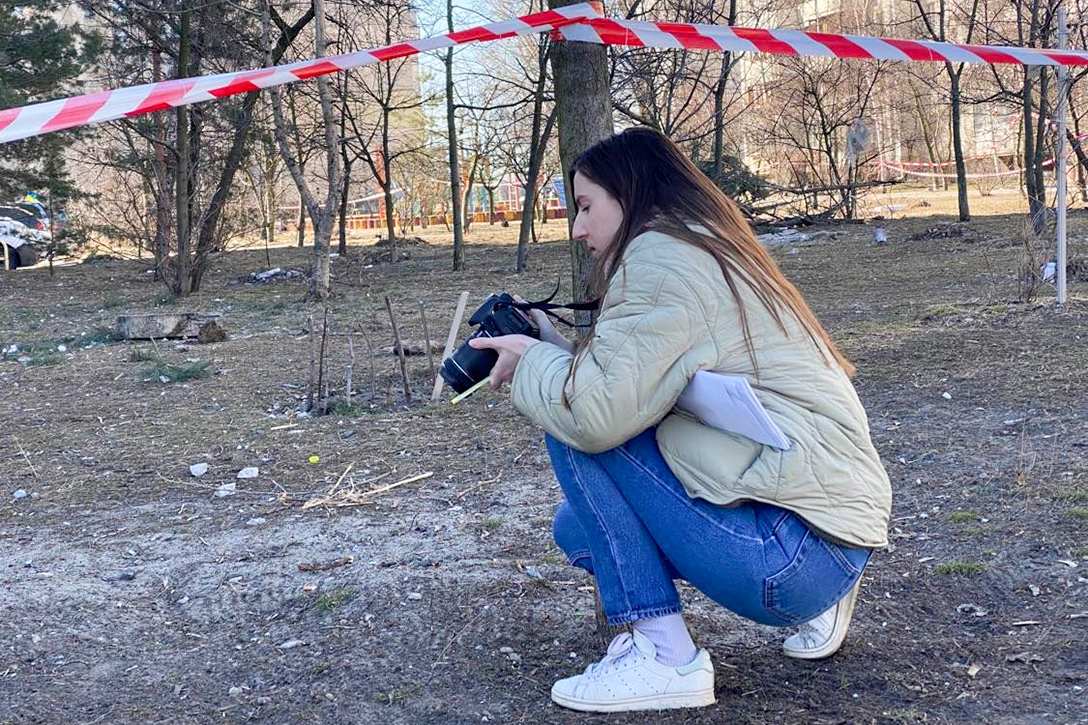 Providing accurate coverage of unfolding events while dealing with the immense stress of living in a warzone has proven difficult for Ukrainian journalists. This tricky balancing act is made all the more acute for Myroniuk: Until a week ago, her mother and grandmother were stuck in Bucha, one of the hotspots of recent fighting.

“They were stuck for two weeks in a basement without heat, and slowly running out of food and water,” she explains. “And I kept trying to get them out of there.” In the end, her family managed to leave the city.

“I immediately put them on a train to western Ukraine, so they are now in a safe place.” She pauses. “Relatively safe.”

Finished with the morning’s first interview, Myroniuk is next due to meet with heating network technicians who are busy repairing a hot water conduit damaged by yet another missile strike. We are driven to Vynohradar, on the western edge of the city, by stern-looking Ivan, a friend of  the Independent’s seasoned war reporter Illia Ponomarenko’s.. Originally from Volnovakha, a small town in eastern Ukraine, Ponomarenko has covered the war in Donbas since the initial 2014 Russian invasion. He has also been embedded with UN peacekeeping forces in Palestine and the Democratic Republic of Congo.

As Anna and I walk around the pile of rubble that once was part of an apartment complex, I am accosted by 29-year-old Vitali, a resident of a nearby building, who offers me a cigarette as well as a bit of gossip. There were civilian deaths here, but the government is keeping it quiet.

“They took out the bodies at night,” he says, “so as not to disturb the other residents and create a panic.”

The monthlong-and-counting war has taken a huge toll on the psychological health of the Ukrainian population. The journalists of The Kyiv Independent are no exception.

“It’s complicated, and I’ve had some meltdowns,” Myroniuk said. “One evening, I called a friend and told her, ‘I’m not coping.’ And I just let loose. But that was just once.”

This feeling is echoed by Anastasiia Lapatina, another reporter for the Independent currently based in Lviv, in relatively unscathed western Ukraine. Lapatina’s mother was evacuated a week ago from Irpin, a city to the northwest of Kyiv that has seen heavy fighting in recent days.

“Our house is still there; she couldn’t even take our dogs,” says Lapatina over the phone. “They left in an insane hurry, they thought they were going to come back soon.”

The 20-year-old reporter, the youngest at The Kyiv Independent, is working for the outlet all the while pursuing a degree in international relations — online.

“Right now, I’m sort of freelancing. I’m getting paid by article,” she explains. “I’m still in school, and it’s a lot of responsibility to be constantly churning out material.”

Until recently, she was studying in France as part of an exchange program. When the war started, she headed straight to Poland, hoping to cover the influx of refugees there. She ultimately decided to settle in Lviv.

“A bunch of my colleagues are here, there are a lot of resources available to the media, and it is Ukraine, you know? There’s nowhere I’d rather be than home right now.”

She acknowledges that the recent days have been especially hard, and that balancing her work with the need to preserve herself has been difficult.

“I’ve been feeling overwhelmed and tired recently,” she sighs. “I don’t want pity, but I hate the fact that we all have to be strong, and persevere, and work, and keep it together, and do our best.” She goes on. “Sometimes, I just want to sit and be comforted, and just cry, and be scared. At the same time, I need to shine a light on what is happening.”