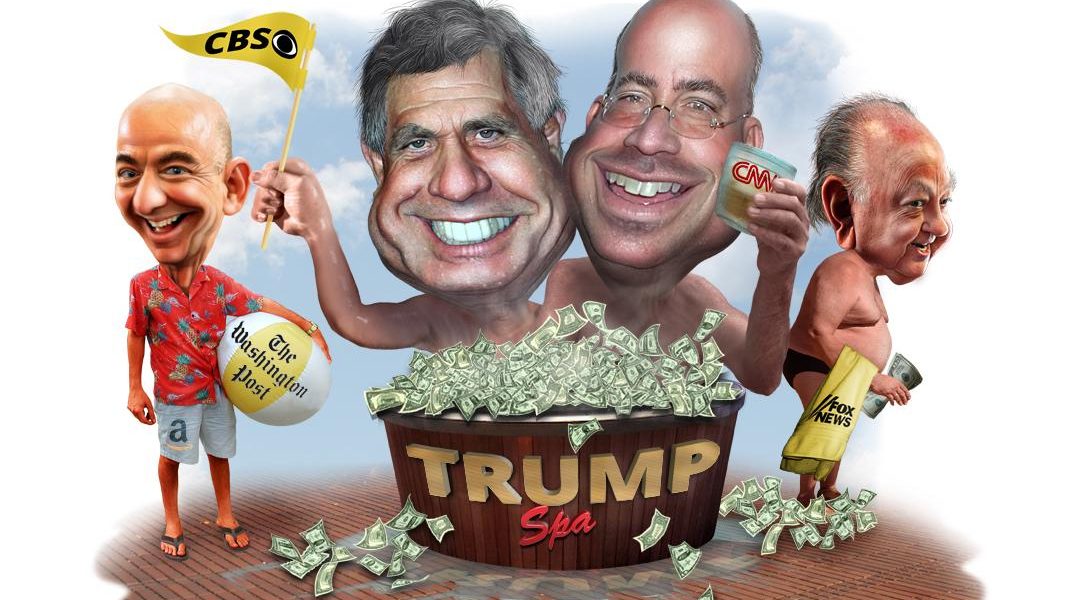 The Press Is Jumping Off the Trump Gravy Train

The media giveth and the media taketh away. That is the lesson Donald Trump is currently learning — and he is learning it the hard way. His frustration with the “dishonest media” shouldn’t be surprising.

After all, his rise from self-promoting, self-proclaimed billionaire to Republican presidential nominee was abetted by the same press that is now in the process of pouring cold water on him.

In the year since announcing his candidacy with a splash, Trump has earned a staggering $4.3 billion in “free media” — a term that describes how much a candidate would have had to spend on ads for the exposure they received for free.

But it wasn’t just Trump who made out like a bandit. In riding Trump’s coattails, media moguls have been living the good life. They made tons of advertising money as their outlets fanned the flames during the Republican primary.

However, this symbiotic relationship was not destined to last. After all, it was always a marriage of convenience because most of the corporate media despises Trump and the notoriously thin-skinned tycoon did nothing to endear himself to journalists.

He mocked a disabled New York Times reporter, banned media organizations like Politico and The Washington Post from his campaign events, and said he wanted to weaken the First Amendment by changing libel laws to make it easier to sue newspapers. Trump also picked a fight with Washington Post owner Jeff Bezos.

Now, after he has made them a lot of money, the media giants are turning on the GOP nominee.

In other words, the mainstream media that earlier enabled Trump is now atoning for that malpractice by trying to disable him. Even senior leaders of the Republican Party are repudiating him, although the hard-core party operatives and their down-ticket candidates are staying on board — so far.

One little-noted result of the media-engendered Trump candidacy is to deprive many Americans of a meaningful choice this November.

Here is how the Houston Chronicle editorial board put it in its endorsement of Hillary Clinton:

An election between the Democrat Clinton and, let’s say, the Republican Jeb Bush or John Kasich or Marco Rubio, even the hyper-ideological Ted Cruz, would spark a much-needed debate about the role of government and the nation’s future, about each candidate’s experience and abilities. But those Republican hopefuls have been vanquished. To choose the candidate who defeated them — fairly and decisively, we should point out — is to repudiate the most basic notions of competence and capability.

Journalists covering the race knew all about Trump’s competence, capabilities and temperament – or the lack thereof. However, the lure of advertising dollars caused most outlets to abdicate the role journalists once played as the Fourth Estate.

There wasn’t an inane Trump tweet or insult that didn’t warrant breathless coverage. By focusing on these banalities instead of issues and policy proposals, the media allowed Trump to sell himself as a straight-talking populist.

massive Clinton scandal) away from the presidency. While the press is doing all it can to prevent such an outcome, that is still cutting it very close.

Among those leading the charge, by the way, are the Post and Politico, the same publications that

Trump has blacklisted and targeted. Their coverage is living proof of the old adage, “Never argue with a man who buys ink by the barrel.”

The fact is that the mainstream media didn’t have that much credibility back then and even less now by supporting somebody who will do and say anything to be elected.

Personally I think Trump is doing a wise thing by attacking the media who are now considered bottom-feeders by a majority and who occasionally print the truth when forced to do so.

….such as the recent data dumps by Wikileaks, or the revelation that the Clinton Foundation is a RICO case waiting to happen.

Attacking them now when only about 6% of the public trust them is a brilliant strategy – one that Jill Stein and Garry Johnson would do well to follow.

The media deserves the criticism. Regardless what you think about Trump, the media getting the criticism he’s given them was LONG overdue. (And helps explain the existence of sites like who what why).

At some point Drumpf is going to peel off his mask, and it will be Andy Kaufman.

OK, I stated months ago , that Trump is running, just to make Hillary look like a viable alternative; that is why Bernie stepped aside so easily. His role was sheepdog. He has done this for the Clintons before. Now it is time for Trump to step back, and the obedient media obliges. It is a lot like herding cattle actually. Give them only one path and they will take it. Willingly.

Julian Assange’s lawyer just got run over by a train. You don’t thing someone is angry about those leaked emails do you? The real puppet-masters would probably rather bring on WW3 than let us realize the evil they are up to.

I was a Bernie supporter, just recently got an email from him asking for money. So I was fed up and unsubscribed from his emails.

“banned media organizations like Politico and The Washington Post from his campaign events, and said he wanted to weaken the First Amendment by changing libel laws to make it easier to sue newspapers”

This is hardly limited to Trump: Hillary’s campaign sent out a fundraising email arguing the website Breitbart News has no “right to exist”.

Also, Hillary’s campaign is going after five comedians who made fun of her in standup skits at a comedy club. The club posted a video of the routine (< 3 mins) and Hillary's campaign demanded that the video be taken down, and also demanded the personal contact information of the performers that appear in the recording.

In the year since announcing his candidacy with a splash, Trump has earned a staggering $4.3 billion in “free media”

Criticizing a candidate for getting “free media”? What happened to “we need to get money out of politics”?

What it boils down to is the media deciding to profit at the expense of America.

Had there been any honor in the press they would have shown Trump for what he is from the beginning but they sold their souls for filthy lucre, thereby losing any credibility.

It will take them as long as it will take for the Republicans to heal – if not longer.
A free press must be an honest press.