The strange tale of “Havana Syndrome,” the mysterious neurological ailments afflicting US spies and diplomats stationed overseas since late 2016, has apparently come home to Washington.

Until recently, victims have been limited to US foreign-affairs operations in Cuba, Russia, London, and China. But as Politico and then CNN reported over the last week, Defense Department officials have recently briefed members of Congress on a possible attack on a National Security Council official on the Ellipse, the large lawn south of the White House. That would be the second possible instance of “Havana Syndrome” on US soil, after a White House official complained of the ailments while walking a dog in 2019.

What’s going on? One explanation, offered by researchers from the National Academies as well as by anonymous, off-record spooks, is that foreign adversaries have a superweapon, still unnamed and unexplained, capable of beaming microwave or electromagnetic energy with pinpoint accuracy. Other, more prosaic explanations include anxiety disorder, mass hysteria, competing ultrasonic devices in the embassy offices, a neurotoxin originating in bug spray, and, believe it or not, very loud crickets.

For now, at least officially, nobody knows what’s going on, though both new CIA Director William Burns and Director of National Intelligence Avril Haines say they’re taking it seriously. After the State Department bungled an initial investigation, as a report posted by the National Security Archive earlier this year noted, both the CIA (which also initially dismissed the phenomenon, former acting defense secretary Chris Miller told CNN) and the Pentagon formed task forces to suss out the problem.

Which means at least one thing is confirmed: “Havana Syndrome” is definitely an op.

Suspects include the Cubans, the Chinese, and the Russians, since symptoms have befallen victims posted in those three countries, all of whom are considered adversaries of the United States.

Perhaps no country has been the focus of more asymmetrical attention from US intelligence than the Marxist-Leninist Republic of Cuba, a legacy dating since the 1960s, the Bay of Pigs, and the subsequent assassination attempts on Fidel Castro.

As Adam Entous and Jon Lee Anderson reported in a 2018 New Yorker feature, Cuba’s spy services punch well above their weight and — in addition to holding a generations-old grudge against the CIA — were deeply suspicious of the new class of diplomats who arrived on the island following the brief detente brokered by Barack Obama’s administration. Donald Trump gave them no reason to cool off: Castro died 23 days after his election, and Trump marked the occasion with a speech that eulogized the Cuban leader as a brutal dictator who abused his people.

At the same time, nobody has offered a technological explanation, or offered cause for suspecting Cuba has the capacity to develop a precise, long-range, sonic device (though that wouldn’t stop them from obtaining such a device from, say, Russia). And though Cuba has historically had bonds with both Russia and China, conducting operations against Americans in those countries would require some cooperation.

This a theory offered by Raul Castro himself, according to unnamed “US officials” — whose hearsay, along with an official denial from the Cuban government, made Entous and Anderson’s New Yorker piece. Cuba and China enjoy a close relationship: the countries are developing AI together, and Cuba is a partner in the Chinese government’s “Belt and Road Initiative,” the string of worldwide infrastructure improvements and economic development projects that Xi Jinping’s government is using as a soft power tool. The two countries cooperate with military intelligence: Listening devices recently constructed near Havana, apparently designed to intercept communications from the US mainland, could be funded by the Chinese, as the Diplomat speculated in 2018. China possesses sophisticated technology and a global reach; maybe Belt and Road also includes a noise weapon?

The favorite bête noire of the Rachel Maddow crowd, the malevolent hand of the Kremlin has been at times blamed for Donald Trump, Glenn Greenwald, and Jeremy Corbyn — and was fingered as a possible player in Cuba early on by Obama alums. “The Russians would have every interest in fucking with us in Cuba,” as Benjamin Rhodes, the former Obama Administration staffer who led the secret negotiations ahead of the brief detente with Cuba, told the New Yorker. Using a sonic weapon, maybe developed by Soviet scientists and perfected by Putin’s FSB, would be one way to derail Obama’s Cuban experiment.

Marc Polymeropoulos, the former senior CIA official who first experienced the symptoms during a December 2017 visit to Moscow, thinks he was singled out by the Russians for special treatment, as he told GQ’s Julia Ioffe. (Then again, he also was around high explosives in Iraq and Afghanistan that can cause brain injuries.) Russia very openly and proudly practices “asymmetric” statecraft, and covertly disabling America’s capacity to operate in the world — without laying a hand on anyone — does fit in that milieu.

This Op Is Ours!

Any fair, agnostic person would note another possibility, albeit an unsettling one, that this might turn out to be… an American op: bullshit cooked up in the Beltway, a sonic Gulf of Tonkin used as pretense to justify the pursuit of US interests — deliberate friendly fire inflicted on US diplomats, sacrificed to the cause. As crazy as it may sound, our own dear national security apparatus has proven historically all too willing to foist self-attack schemes on the American public and a clueless media.

Millennials will remember Ahmed Chalabi’s yarns about Saddam Hussein’s (fictional) aluminum tubes and yellow-cake uranium that were splashed all over the front page of the New York Times. Further back, Cuba was the proposed target in 1962 for a false-flag operation called Operation Northwoods, in which the US military would have assassinated Cuban emigres and refugees, even blown up a US ship, to build public support for an invasion of the island. Institutional memories live long and die hard. If CIA agents and State Department staffers were falling sick, that’s a good reason to close the embassy, cancel Americans’ Havana vacation plans, and resume pressuring the Cubans to abandon Communism. 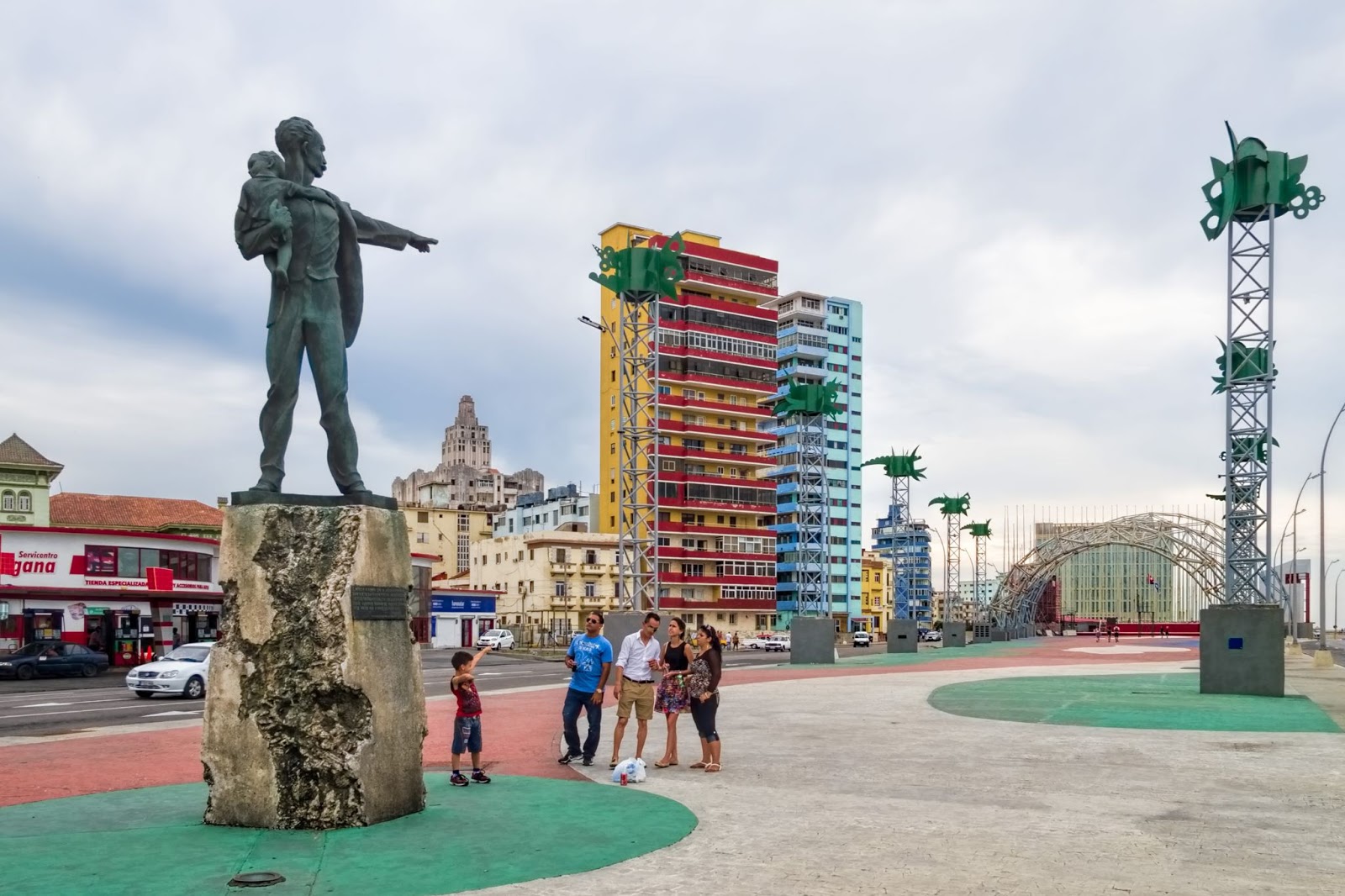 The Anti-Imperialist Plaza in Cuba features a statue of José Martí holding a child and pointing towards the US Embassy in the distance.
Photo credit: Dan Lundberg / Flickr (CC BY-SA 2.0)

Blaming China fit well into the Trump-era pattern of ratcheting up tensions with Xi Jinping over trade and the South China Sea. Blaming Russia would be convenient now for President Joe Biden, who publicly denounced Putin as a killer and is applying new sanctions for the Russian strongman’s attempted murder of dissident Alexei Navalny. As GQ’s Ioffe documented, Russian scientists have also demonstrated longstanding interest in directed energy weapons; however, as Gizmodo noted, nobody has presented or leaked so much as a prototype of any such gadget.

Or have they? The Americans have all kinds of directed energy weapons. In 2016, the Army revealed that defense contractor Raytheon developed a high-powered microwave weapon capable of downing drones. And this is not just a US thing: Ukraine has allegedly shared microwave weapon technology with Saudi Arabia, though those weapons were for scrambling the circuits in missiles or drones, not human brains.

At the same time, this is the most conspiratorial theory. The National Academies and University of Pennsylvania researchers all say that the afflictions and some of the injuries are real, even if they are inconsistent and unexplained.

At least one victim, Polymeropoulos, was diagnosed with traumatic brain injury by doctors at Walter Reed Hospital after he was (allegedly) first attacked in Russia in 2017; other suspected attacks, on Marines in Syria who fell ill after a Russian helicopter flew overhead, turned out to be caused by food poisoning.

At least one entity knows more than it’s letting on. The National Academies report that supported the directed energy weapon theory also admitted that it was denied access by American intelligence to classified material that might have provided more of an explanation. In this way, the real culprit may be a usual suspect: It’s a state secret.

One response to “The Mysterious, Anonymous “Energy Weapon”: Whose Op Is It, Anyway?”