A Massive Methane Reservoir Is Lurking Beneath the Sea - WhoWhatWhy
Reading Time: 3 minutes

This story originally appeared in Eos and is republished here as part of Covering Climate Now, a global journalism collaboration strengthening coverage of the climate story.

Methane bubbles regularly reach the surface of the Laptev Sea in the East Siberian Arctic Ocean (ESAO), each of them a small blow to our efforts to mitigate climate change. The source of the methane used to be a mystery, but a joint Swedish-Russian-US investigation recently discovered that an ancient gas reservoir is responsible for the bubbly leaks.

Methane in the Laptev Sea is stored in reservoirs below the sea’s submarine permafrost or in the form of methane hydrates — solid, ice-like structures that trap the gas inside. It is also produced by microbes in the thawing permafrost itself. Not all of these sources are created equal: Whereas microbial methane is released in a slow, gradual process, disintegrating hydrates and reservoirs can lead to sudden, eruptive releases.

Methane has now started to escape as the Laptev’s submarine permafrost is thawed by the relative warmth of overlying seawater. With an even stronger greenhouse effect than carbon dioxide, methane released into the atmosphere could substantially amplify global warming.

“To anticipate how these methane releases will develop over the coming decades or centuries, we need to understand what reservoirs of methane the releases are coming from,” said Örjan Gustafsson, leader of the research group that conducted the investigation. 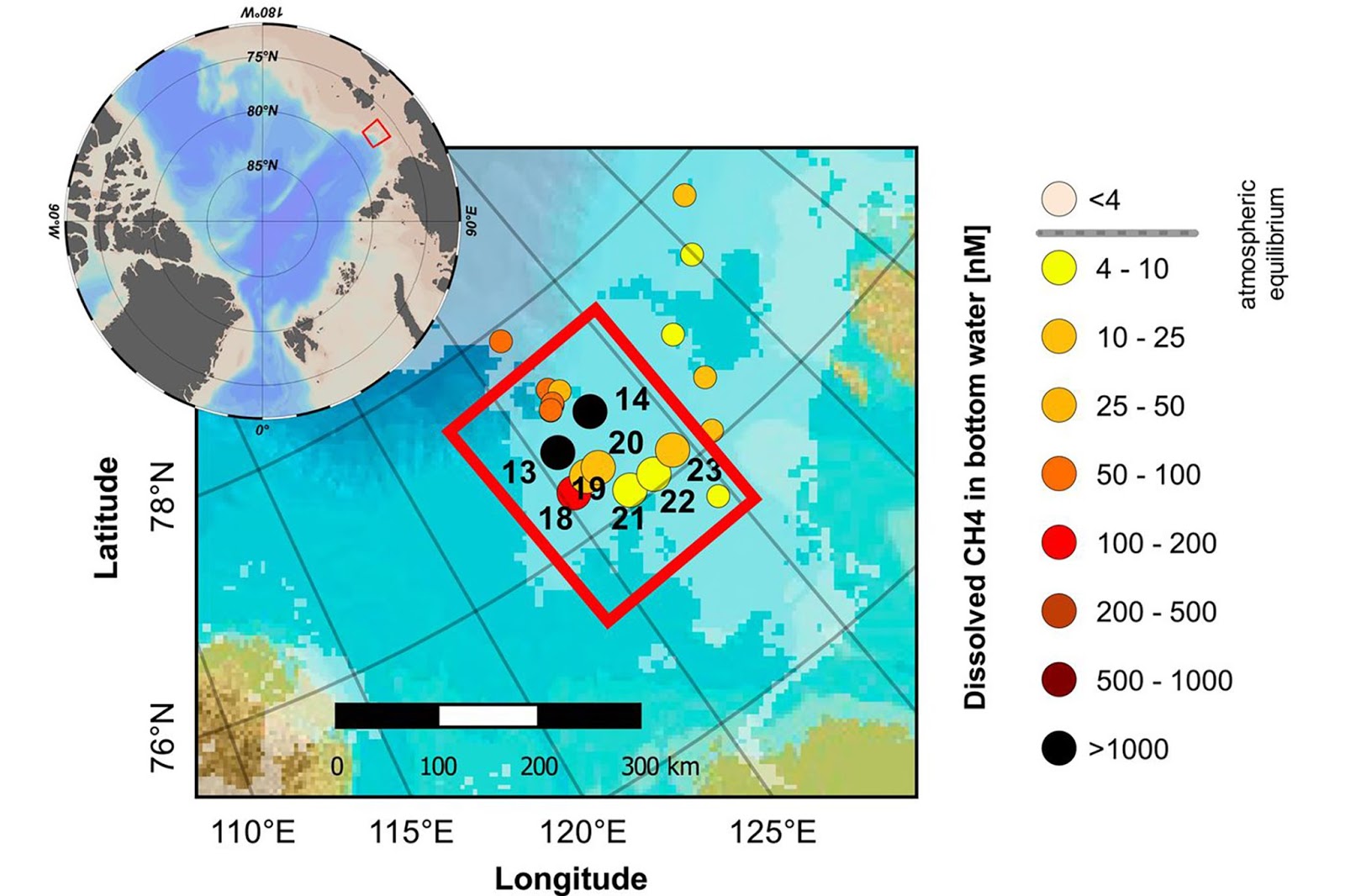 This map shows the study area and sampling locations for methane concentrations and isotopes. Photo credit: DOI (CC BY 4.0)

Julia Steinbach, a researcher at Stockholm University and lead author of the new research, was instrumental in devising the triple-isotope-based method for finding methane sources. Stable isotopes detect the origin of the molecules, and radioactive isotopes help to find their age. Using this novel approach, the team discovered that the source of the methane was an old reservoir, deep below the permafrost. The study was published in the Proceedings of the National Academy of Sciences of the United States of America in March.

“The big finding was that we really have something that’s coming out from a deep pool,” said Steinbach. As the permafrost thaws, it opens up new pathways that allow methane to pass through.

According to Gustafsson, this is worrying, as the pool likely contains more methane than is currently in the atmosphere. “There is, unfortunately, a risk that this methane release might increase, so it will eventually have a sizable effect on the climate,” he said.

The Challenge of Predicting Methane Releases

Although intrigued by the study, Jennifer Frederick, a geoscientist at Sandia National Laboratories not involved in the recent research, warned against trying to inflate its findings. “It is very challenging to be able to be confident that your small area is representative of the larger area,” she said. She is hopeful, however, that with enough of these types of studies, scientists will get to a point where they can make accurate predictions about methane releases.

Gustafsson also emphasized that the results are applicable only to this specific location. “It is quite plausible that there are other sources — the thawing permafrost or the hydrates that can be the major source of methane in other parts of this enormous system.”

Even though the study area concerns one of the places on Earth most difficult to reach, the scientists hope to conduct more expeditions to map methane sources in the ESAO. “The permafrost is a closed lid over the seafloor that’s keeping everything in place. And now we have holes in this lid,” said Steinbach. “That means that we really have to keep a close look on it.”