The usual solutions to drought are to limit water use and cut allocations for industry and agriculture. In fact, state officials recently sent warning notices to more than 40,000 entities holding the rights to water from natural sources, urging them to implement conservation measures.

But to Mike Markus, who has worked in the California water industry for more than 30 years and is now general manager of the Orange County Water District, California needs other options. “If you … talk to any major water retailer, they’ll tell you we have to have water supply reliability,” Markus said. “We can’t afford to use water once and throw it away.”

There’s no argument that the state is in desperate need. According to the US Drought Monitor and the California government website, more than 90 percent of California’s residents are in areas suffering from moderate drought, with reservoir and groundwater levels “significantly” below average and snowpack just 62 percent of the average for April.

The upcoming law, which is scheduled to take effect by the end of 2023, will provide wastewater treatment plants with a framework of technical regulations for purifying and reusing dirty water — whether it’s storm runoff, “blackwater” from toilets or urinals, or “greywater” from washing, laundering, bathing, or showering. Once treated through microfiltration, reverse osmosis, and UV light, along with additional requirements that will be released with the new regulations, wastewater could bypass a typical natural filtration period and instead be injected directly into clean-water pipelines, in a process called direct potable reuse.

Current California law allows only indirect potable reuse, which relies on blending treated wastewater with other natural water sources over enough time to provide natural filtration of the treated wastewater. Treatment plants utilizing indirect potable reuse, therefore, must have access to an environmental buffer such as a massive storage tank, aquifer, or surface water reservoir. 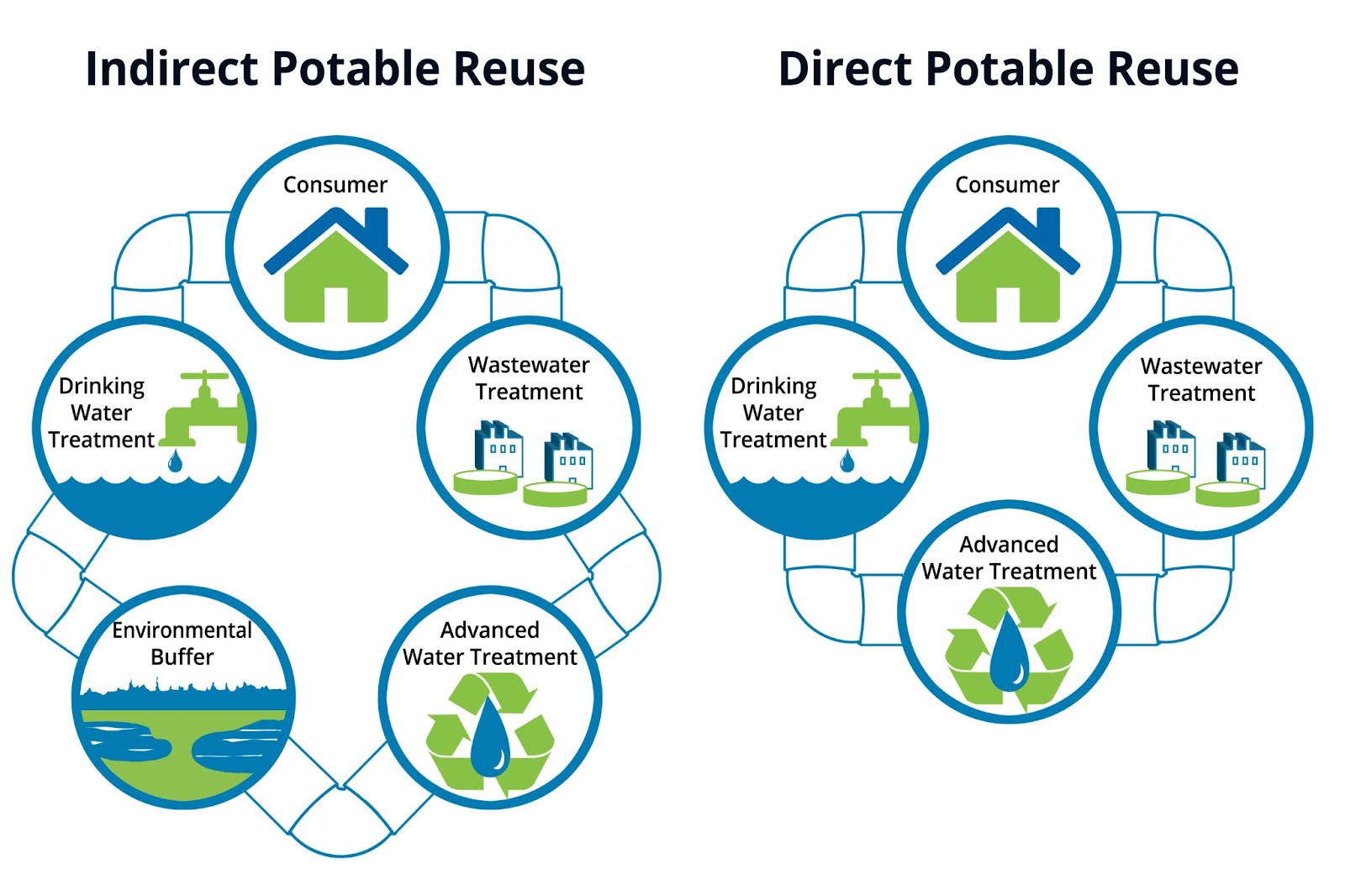 Direct potable reuse, soon to be an option for California’s treatment plants, does away with the need for an environmental buffer — a reservoir, storage tank, or underground aquifer — to filter water before it goes to consumers. Photo credit: Inspired by Water Resources Research Center at the University of Arizona PDF, from Dave Gandy / Wikimedia (CC BY 3.0), Clker-Free-Vector-Images / Pixabay, and OpenClipart-Vectors / Pixabay

Indirect potable reuse has already been adopted in some parts of California. The indirect potable reuse plant that Markus oversees, the world’s largest, resupplies the groundwater basin beneath Anaheim, CA. Each day it turns out up to 100 million gallons of near-pure water (the outflow undergoes a bit more treatment before release) by recycling wastewater that would otherwise have been discharged to the Pacific, Markus said. According to the Orange County Water District website, that’s enough potable water for 850,000 people.

The idea of reusing water is not new. Since 1992 California has allowed household irrigation from greywater. In some municipalities, including San Francisco and San Jose, recycled water is available from the water utility and can be used for irrigation and toilet flushing.

Reusing water locally, whether it’s processed directly or indirectly, is certainly cheaper than importing it. Orange County estimates that the energy cost to produce indirect reuse water is half that required to transport water from northern to southern California. The water district’s website notes that the cost, without grants, to produce potable water from wastewater is $850 per acre-foot. With grants and contributions from the county, the cost falls to $525 per acre-foot.

By comparison, the cost for Orange County to buy imported water wholesale is $1,015 per acre-foot, according to a 2018 district plan. Much of that money goes toward the energy involved in using hundreds of miles of pipeline and pumps.

Despite the high price, Markus said, southern California “relies on imported water. We get 13 inches of rainfall a year, and it can’t be relied upon.”

The key stumbling block to indirect reuse is that treatment plants need a place to store their treated wastewater before it can be reused and sent into homes.

Markus’s plant, the Orange County Water District’s Groundwater Replenishment System, “is so successful because the Anaheim aquifers are nearby,” Markus said. “But for a lot of locations, there’s nowhere to put the water [to provide the environmental buffer]. The issue is more institutional than technological.”

Enter direct potable reuse, whose big benefit is that it lets cities reuse water without needing an aquifer or reservoir.

The technical regulations surrounding direct reuse are being developed by the state water boards. Jennifer West, the managing director of WateReuse California, an arm of the national organization WateReuse Association, is working closely with California regulators as the process moves along. “We’re doing everything we can to push the regulations forward, and to make funding sources and loans available for recycled water projects,” she said.

Markus expects the requirements for direct reuse to be much more stringent than they are for indirect reuse. He believes that extra treatment steps, possibly including biological carbon filters, will be mandated to ensure consistent water quality. “Online monitoring of pathogens will also be an issue,” he said. “There will have to be a higher degree of dependability.”

Being able to prove consistent water quality will be vital not only for technical acceptance but for public acceptance. After all, this is not just rainwater getting recycled; it’s also wastewater from showers, toilets, and taps. People squeamish at that thought might take heart from the fact that astronauts on the International Space Station safely drink their own urine — once it’s been distilled and processed.

“There always needs to be education,” West said. “Once people understand the purification process that goes into reuse, they will feel much more comfortable. Understanding [that] the water meets drinking water standards, that’s very important for people. The public outreach aspect is one of the major processes each community will go through.”

The other major hurdles are regulatory, technical, and monetary. One of WateReuse California’s roles will be to ensure that funds remain for the state to continue with research projects needed to push the regulations forward. Once the regulations come online, funding will also be a challenge for each community.

“These projects are expensive,” West said. “Each community’s process will be different, regionally and geographically. But there will always need to be a major funding plan.” Financial options for current reuse projects include state water bonds, low-interest loans, and grants. “Water is complex here,” West said with a laugh. “There’s no one-size-fits-all.”

That’s true elsewhere as well. The nation’s first direct potable reuse plant opened in 2015 in Big Spring, a city in arid west Texas. The plant was built to combat a lack of local resources during a severe drought and only when it was clear the community had exhausted its other options. According to John Dupnik, the deputy executive administrator of the Texas Water Development Board’s Office of Water Science and Conservation, converting a wastewater plant to direct reuse isn’t an economical first option.

“We look at the easy water options first, like surface water or shallow groundwater,” Dupnik said. “Once we’ve maxed out existing supplies, that’s when we look at unconventional options.”

California cities suffering from drought and relying on imported supplies may feel they’re in the same boat as Big Springs.

“People in the last drought [from 2011-2015] learned how precious water is,” said West. “It’s hard to put a value on how important steady, local water supplies are. Each community will need to decide.”

Although the success of the Big Spring plant will aid legislators in California, West said that each state must develop a unique framework. “The laws here are strict and specific to California,” she said.

At the same time, national guidelines are being developed to help state regulators. In February 2020, the Environmental Protection Agency released a National Water Reuse Action Plan Collaborative Implementation, which outlines 37 actions that may be taken by leaders to “support consideration of water reuse,” though no action is legally required.

As the report states, nearly every public commenter “expressed support for the value of water reuse as a tool.”

West agrees: “Especially as we look at climate change, with all of its uncertainty — we need to be using all of our supplies.”

One response to “California Plans to Make Wastewater Drinkable”