Chevron’s public relations machine has been hard at work turning soothing piano tracks, motherly voice-overs, and truisms about the human condition into a series of smokescreens on YouTube, social media, and TV.

The most recent of Chevron’s ads imagine the oil giant as a Human Energy Company that takes action to lessen its impact on the climate. They speak of polluting less per barrel of oil produced, capturing carbon out of the air and injecting it into the ground, and supporting projects that turn manure into natural gas — all in service of bringing the world energy that is, in their words, ever-cleaner.

Not so fast, said environmental and human rights groups.

On March 16, Greenpeace USA, Global Witness, and Earthworks filed a complaint with the Federal Trade Commission (FTC) accusing Chevron of trying to appear more climate-friendly than it is — an unethical and sometimes illegal practice known as greenwashing. The complaint alleges that Chevron’s surface-deep rhetoric about climate action covers up how little the company has actually committed to reaching meaningful climate goals.

Through advertising that allegedly overstated the company’s commitment to renewable energy and reducing fossil fuel production, the groups say that Chevron violated the FTC’s Green Guides, originally issued in 1992 and updated several times since. These guides set the rules of the road for businesses to protect consumers from falling victim to false environmental marketing claims.

Last year, the FTC secured a major win for consumers, closing a case brought against Volkswagen for its seven-year ad campaign promoting VW and Audi cars as running on “clean diesel” when in fact they were fitted with illegal emission-defeat devices to mask high emissions during government testing. Car buyers received a total of more than $9.5 billion in what amounted to the largest consumer redress program in US history.

The current complaint against Chevron could turn out to be just as big a deal: It’s the first of its kind invoking the Green Guides against the advertising claims of an oil major trying to sell its product to consumers who are increasingly unwilling to ignore the toll on environmental and human health that comes with digging for and burning oil and gas.

“We see this complaint as a test for the new administration to gauge if it’s going to follow through on its stated commitment to tackle climate change,” said Greenpeace spokesperson Ryan Schleeter, who took part in filing the complaint.

The Biden administration made clear its commitment to setting the economy on a path to net-zero carbon emissions by 2050, in line with the recommendations of the Paris Agreement. But with a narrow majority in both chambers of Congress, Biden may have to rely on regulatory bodies such as the FTC to drive change.

Chevron called the allegations frivolous and pointed out that it plans to spend $3 billion toward lowering its carbon footprint over the next eight years.

Schleeter begs to differ. “There’s nothing frivolous about climate pollution or polluting communities that live near Chevron’s operations,” he said.

Any mitigation efforts, the complaint alleges, are dwarfed by the more than 40 billion metric tons of carbon dioxide-equivalent Chevron has emitted since 1965, about the time that the environmental impact of fossil fuels became widely known. That number includes emissions caused by oil and natural gas throughout the supply chain, from extraction to end use in people’s cars and furnaces. It puts Chevron in second place behind Saudi Aramco on a list of the 20 oil companies responsible for 35 percent of all energy-related carbon dioxide emissions worldwide. 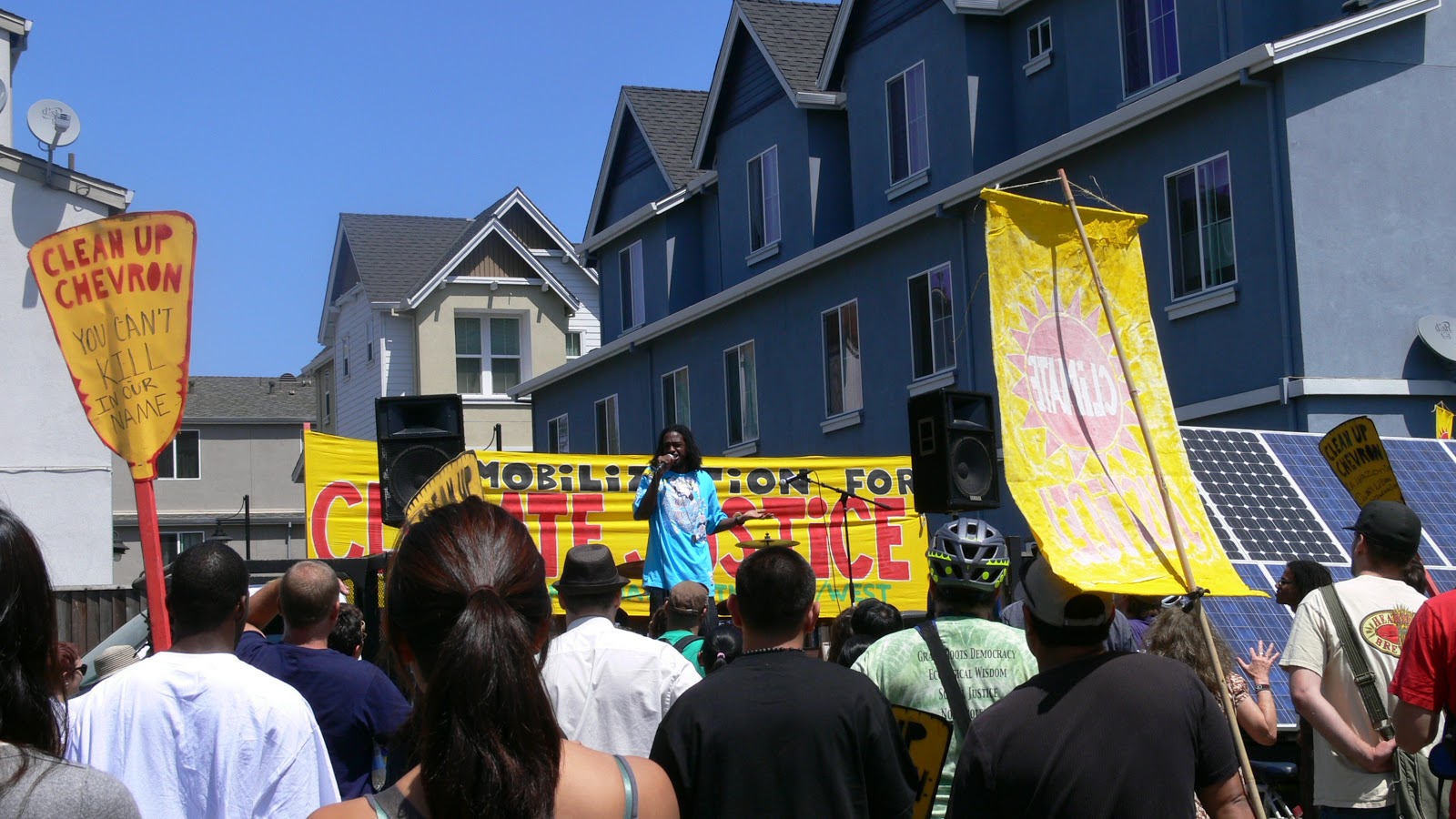 Mobilization for Climate Justice West, a coalition of activist groups, organized a protest against Chevron’s oil refinery expansion in Richmond, CA, on August 15, 2009. Photo credit: planet a. / Flickr (CC BY 2.0)

Chevron’s claim of bringing ever-cleaner energy to its customers also came under fire. The complaint pointed out that from 2010 to 2018 the company put only 0.2 percent of its capital expenditure into low-carbon energy sources. Meanwhile, Chevron allegedly painted itself as a social justice advocate even though the effects of climate change disproportionately affect communities of color.

Chevron’s recent Climate Change Resilience Report, geared toward investors, echoes the promises in its ads. The document refers to a lowering of Chevron’s carbon emissions intensity — the amount of pollution linked to extracting each barrel of oil — by 35 percent by 2028, partly through upgrading lighting systems, replacing old piping or oversized boilers and pumps, and powering some operations with renewable energy. Such measures, the company says, will eventually reduce emissions by 1 million metric tons per year, which is less than 2 percent of the emissions coming directly from operating Chevron’s business.

The company also wants to reduce the amount of methane vented or flared. Methane either leaks or is released deliberately to regulate equipment pressure, and is often burned because the resulting carbon dioxide traps less heat than methane itself. But methane accounts for only 5 percent of Chevron’s direct emissions.

Carbon offsets are another component of Chevron’s strategy to lower its footprint. Any polluter can offset its emissions by supporting projects that avoid or remove greenhouse gas releases, such as replacing coal-fired plants with windmill farms or planting trees as carbon sinks. Most of Chevron’s offset activities go toward consulting organizations that set the rules for carbon offset markets. Not surprisingly, its carbon offsets for 2020 made up for a mere 0.6 percent of its total emissions.

Another of Chevron’s stated intentions, to capture and inject carbon dioxide underground, was undercut by the failure of its Gorgon liquefied natural gas project in Western Australia, the largest in the country, to do so. Chevron built the project on the condition that it bury 80 percent of its emissions but didn’t start capturing carbon until three years into operation. Earlier this year, the filtration system broke, prompting calls to shut down the plant and impose millions of Australian dollars in penalties. Overall, Chevron buried even less carbon dioxide than it wrote off through offsets.

So surely they shouldn't be allowed to operate until they are fulfilling that requirement #auspolhttps://t.co/HrlMJYzMFP

“The solution that Chevron is pointing to around carbon capture, around offsets — these are fixes around the margins,” said Schleeter. “They may play a small part in the energy transition, but to point to them and say this is how we’re going to make our business sustainable, that is just not realistic. And really all that does is prolong the life of fossil fuel infrastructure, lock us into more fossil fuel buildout that we can’t afford.”

Chevron doesn’t promise to slow exploration. Its latest available corporate reports show its crude oil and natural gas output in the US rising steadily. In fact, Chevron is bent on expanding its Permian Basin projects in Texas and expects overall oil and gas output to grow 3.5 percent in each of the next few years.

“There is no technological silver bullet to solving the climate crisis,” Schleeter warned. “There is no future in which we prevent the worst impacts of climate change and continue to expand fossil fuel production.”

Although the FTC complaint is the first to invoke the Green Guides against oil majors, it comes after a rush of greenwashing litigation. In the last three years, six states and the District of Columbia have filed lawsuits against oil majors including Chevron, BP, Shell, and Exxon Mobil for violating state consumer-protection laws. The suits accuse oil companies of choreographing extensive misinformation campaigns as early as the 1950s to hide their role in exacerbating climate change.

Details about the FTC’s next steps regarding the complaint against Chevron have not been made public. Whether the FTC opens an investigation at all is not clear at this point, but a spokesperson said that if an investigation does occur, it could lead to a settlement out of court or, if voluntary compliance fails, a cease-and-desist motion in court. Earthworks, Greenpeace USA, and Global Witness are leaving the door open for any appropriate relief under the law, but they want Chevron to at least remove any misleading marketing claims and issue corrections.