I Learned It By Watching You - WhoWhatWhy
Reading Time: 8 minutes

And yet, in the past year, the PSA has been asked to rise to the occasion: to deliver constantly updated and often-complex information about a scary thing in a confused time. Bus ads and video clips and commercials — they had a lot of work to do to try to keep us out of the quagmire of misinformation, not always successfully.

Just as we have been forced to adapt, so too has the messaging around the COVID-19 PSA. Here, we’ve gathered PSAs that reflect a spectrum of approaches to that messaging, from the straightforward to the… very, very weird. These ads come from the federal government, individual states, and from countries around the world. As we journey through this collection of styles and approaches, we can start to see something noble peeking through: information trying to save lives.

Come along on this historical tour of the COVID-19 PSA.

In March 2020, the Ad Council — working with the Centers for Disease Control and Prevention and Department of Health and Human Services — released a campaign with general information about COVID-19 symptoms, risk groups, and where to find more information. This was early days: a just-the-facts approach was called for (with a seasoning of fear-mongering).

The result: short, punchy, factual PSAs. These are the kinds of ads found on bus stops, on the subway, and in the columns of your Facebook news feed. 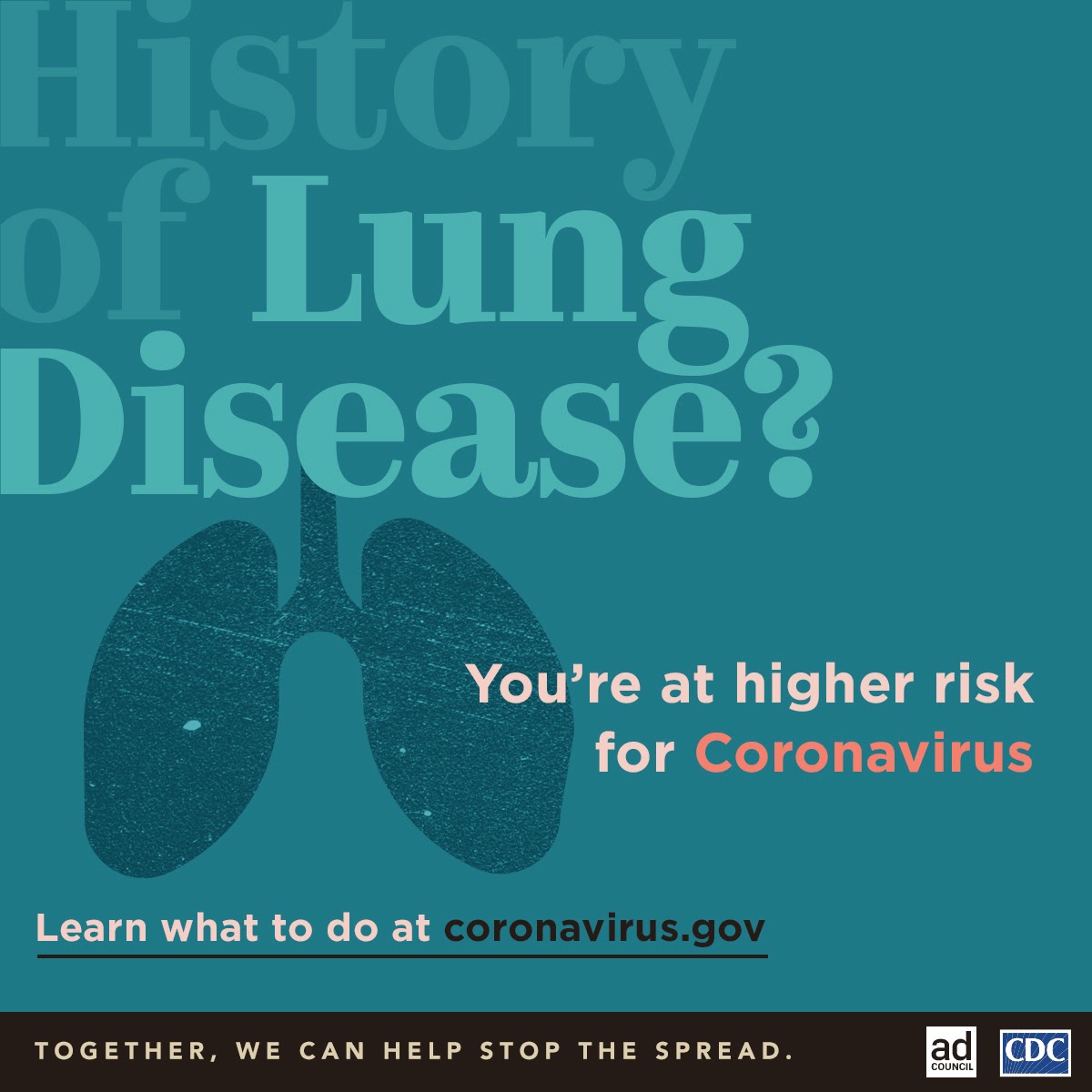 According to the Ad Council, the message in the early days was, simply: “Slow the Spread.” But, “As the significant impacts of the virus rose around the country, it became time to address the urgent, varied needs of Americans triggered by this crisis.”

Later on in the summer, the Ad Council revamped its standard PSA. The messaging was now less about information and more about persuasion. 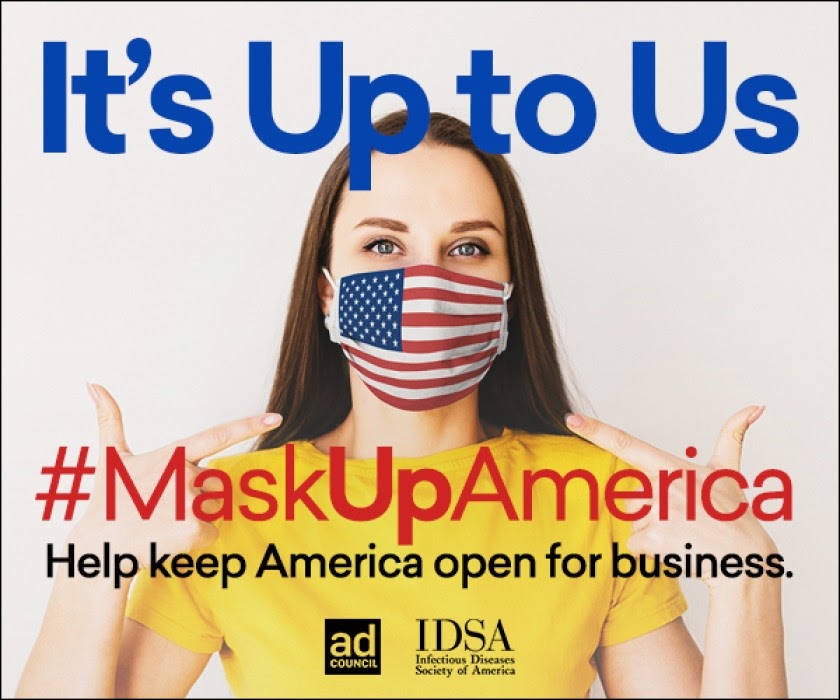 The #MaskUpAmerica campaign is one example. It asks citizens to do their part. There’s an old-school, “buy war bonds” feel: wear masks and keep the nation running. The #maskupamerica hashtag now sits at 21,400 posts on Instagram and has gained moderate speed on Twitter as well.

But when persuasion gets stale and people stop paying attention, it’s time to bring out the big guns.

Elsewhere, some governments began taking not so much a “here is the information” approach, but rather a “here are the rules” approach. As seen from the government of Ontario: 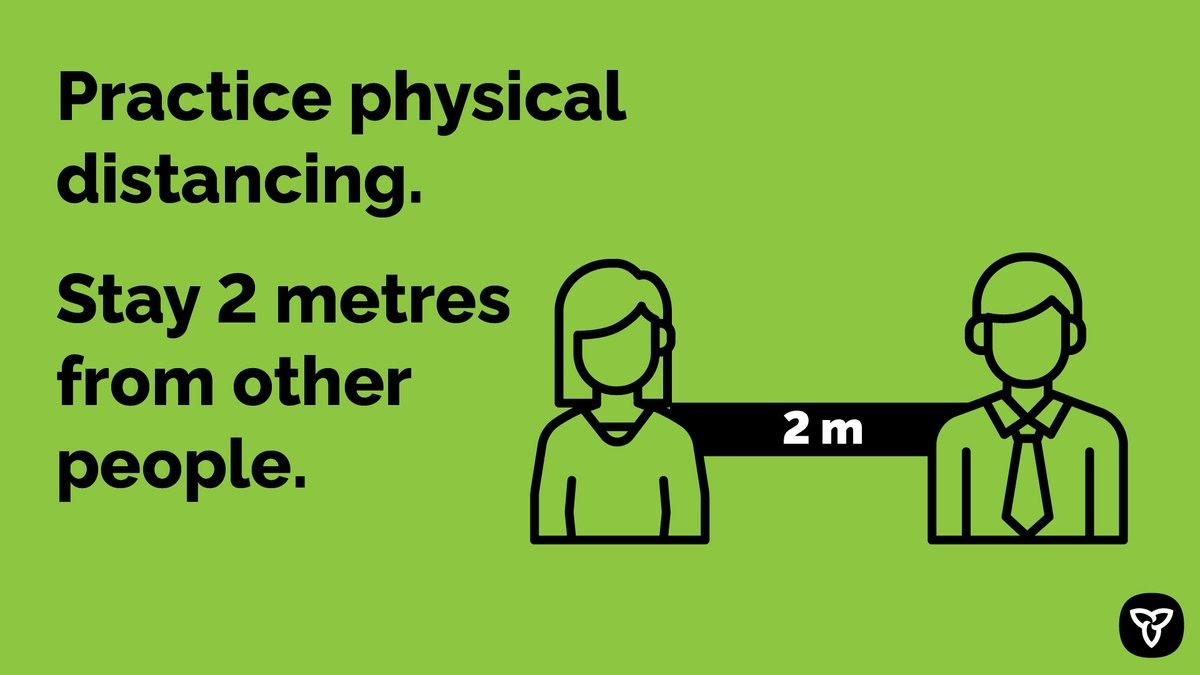 The ad allows little room for misunderstanding or misinterpretation. No click-throughs, no link. Just information. This PSA is characteristic of the messaging we began to see more and more as the pandemic wore on. These ads weren’t presenting new information, just reminding us… over, and over, and over. 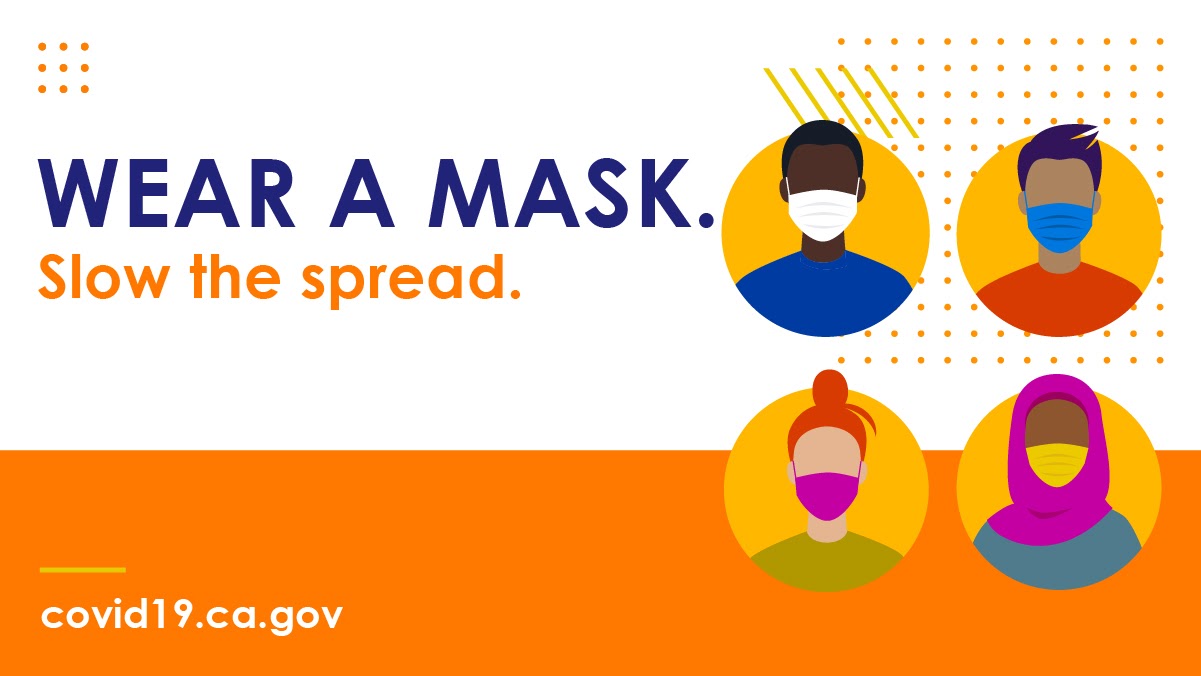 A simple message with simple graphics and very little risk of not getting it.

But these “reminder ads” often faced a dilemma: How do you find a balance between getting all the information in one place without making things too wordy? 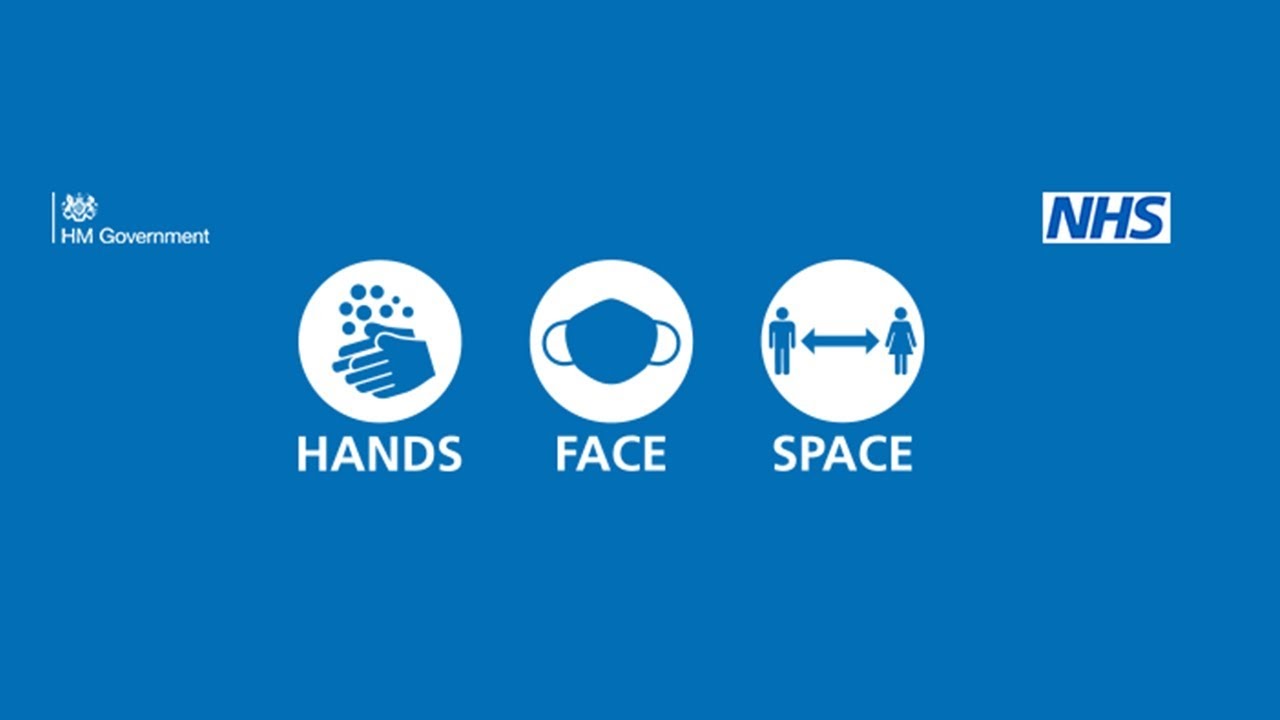 Short, sweet, and to the point. An informational advertisement from the NHS in the UK. Photo credit: Department of Health and Social Care / YouTube

You can almost hear the exhausted sigh. By this point, it’s as if Canada’s National Health Service can only muster the energy to hit the essential points.

An important thing to note here is that all of these ads were released back in the spring/summer of 2020, before “pandemic fatigue” became such a common phrase on everyone’s tongue. If anything, the messaging of these ads works to fuel the fatigue we have all been fighting off lately.

In a paper published this past fall, the World Health Organization outlined the four main strategies for governments to maintain and reinvigorate public support for protective behaviors.

This PSA covers the second point, but misses the empathy of the other three. It’s almost as if the PSA itself is suffering from fatigue. We’re tired of hearing it and it’s tired of saying it.

Time for the feel-good messages.

Prominently in this category, we have a collection of videos that were produced through a contest hosted by the government of New York. (NYU did something similar with its students.)

Orchestrated by Gov. Andrew Cuomo (D) and his team in May 2020, the “Wear a Mask” ad contest asked New Yorkers to think of a creative way to bake New York pride into an informative and thoughtful PSA, à la the Ad Council’s #MaskUpAmerica campaign. 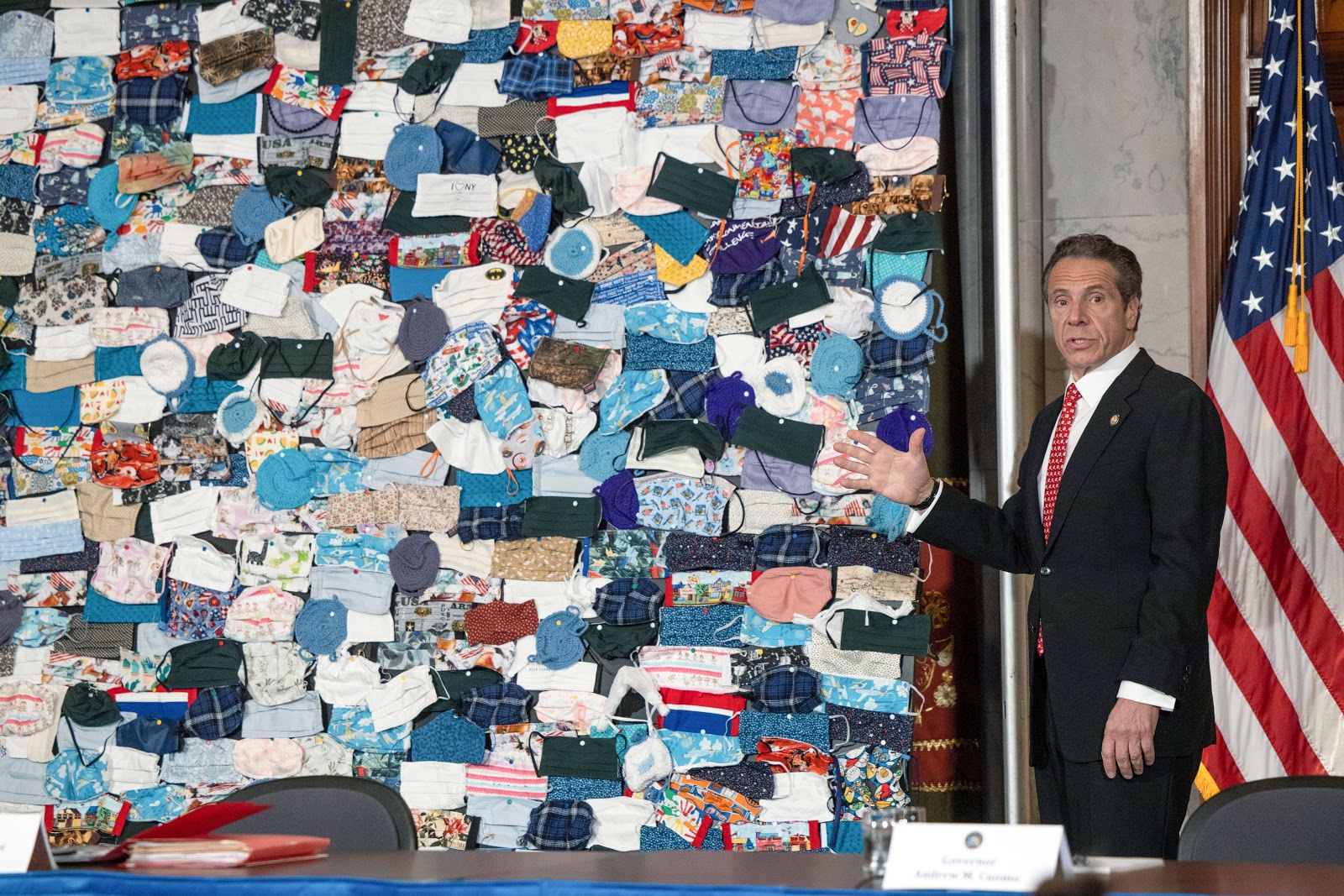 The contest called on citizens to submit videos calling for statewide mask wearing, after which New Yorkers would vote on their favorite. The winning video, from Bunny Lake Films, is below:

The video features various New York City residents calling on their fellow New Yorkers to do what needs to be done: Wear a mask so NYC can reopen. It’s difficult to pinpoint exactly what earned this video first place, but it’s hard to ignore the call to community.

“Show your love for New York, because New York loves you.”

In a similar vein, the Ad Council released an ad from earlier in 2020, the “You Will See Me” campaign. This speaks directly to Black Americans, who have been disproportionately affected by the pandemic. 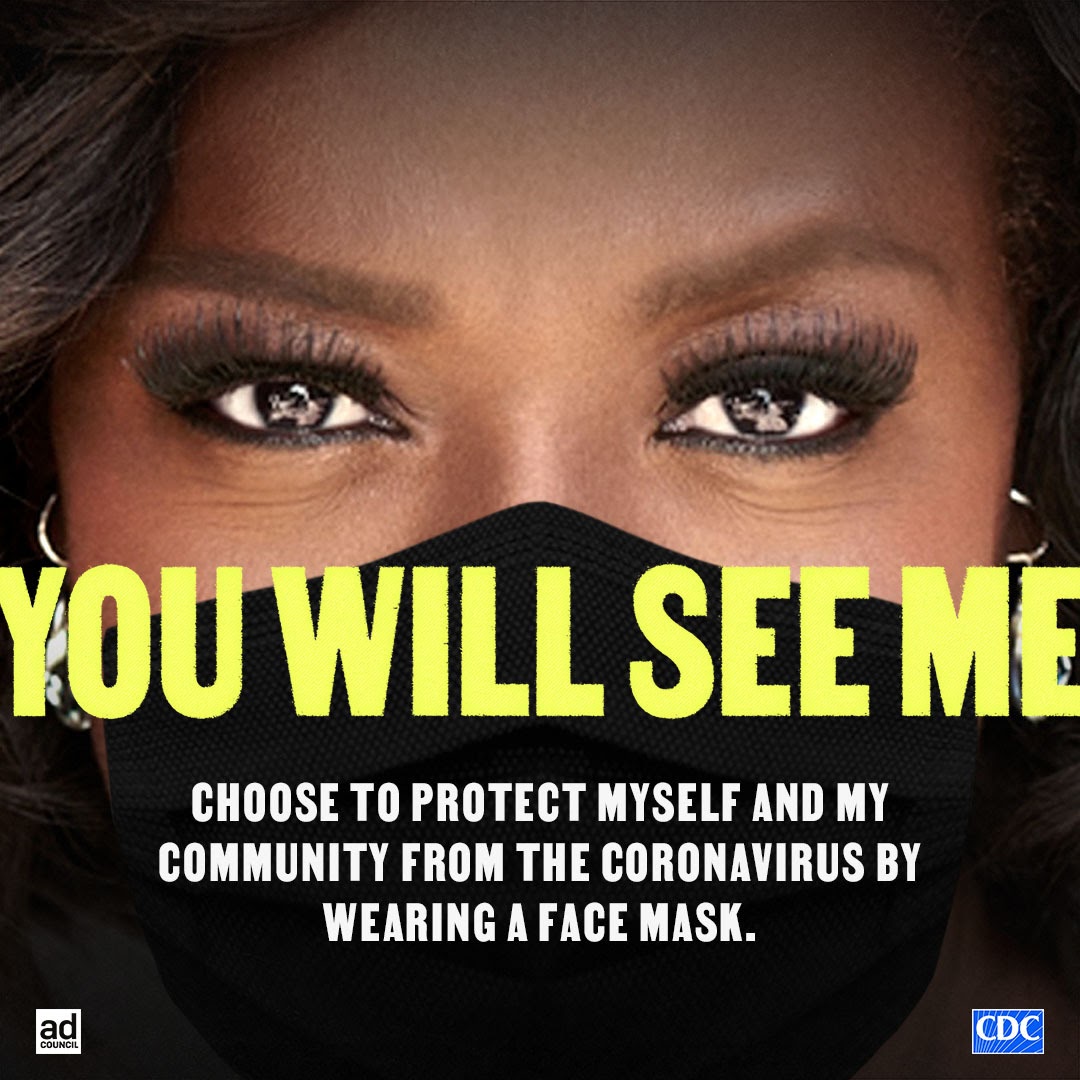 The ad, starring prominent members of the Black community, calls upon others to wear masks and protect their neighbors. You’re not just a community leader, a mother, or an athlete, the ad says; you’re also saving lives.

These ads focus not on rules or consequences, but on people. The goal isn’t to activate a behavioral algorithm (mask/wash/distance), but to activate empathy for your fellow citizen. (It’s not surprising that these ads feel like a response to the anti-masking, anti-shutdown rhetoric.)

Beyond facts, beyond rules, beyond good citizenship, there is a land where the weird ads roam.

The final category we’re going to touch on includes ads that use humor to convey the message. Or, sometimes, “humor.”

It’s worth mentioning that American PSAs did not lean on making us laugh. Thus, we’ve pulled several from around the world.

The “Mr. Covid” spots, issued by Alberta’s government, feature a personified coronavirus that infects social gatherings. The moral of the story? Don’t open the door to the man with the virus for a head.

We’re back to invoking fear, but this time, as farce.

In terms of COVID-19 numbers among Canada’s 10 provinces and three territories, Alberta had been among the provinces with the highest COVID-19 numbers, largely driven by tourist hotspot Banff. However, in the weeks following Mr. Covid’s holiday-season debut, numbers didn’t spike. Did Mr. Covid work?

“We look at this big picture and what it’s suggesting is that what we’re doing in Alberta is working,” Craig Jennie, associate professor of microbiology, immunology, and infectious disease at the University of Calgary, told the Canadian Broadcasting Corp. in a January interview.

But it’s a bit too early to say just how much of an impact the Mr. Covid ads played in a reduction of the numbers, and correlation doesn’t equal causation.

In Germany, the government released this ad back in November 2020, when Germans were being asked to go back inside after a fairly relaxed summer. With the second wave on everyone’s mind, Germany opted for inspiring, rather than terrifying, messaging.

The ad follows an elderly man recounting hardship in his early 20s when the second wave hit. In the tone of a war veteran, the man discusses what a sweet setup he had: fighting the virus by doing nothing. “We sat on our arses. Lazy as raccoons!”

Alas, lazy they were! Chancellor Angela Merkel ramped up lockdown measures in the weeks leading up to Christmas, which the BBC deemed the most intense lockdown in postwar Germany to date.

Meanwhile, down in South Africa, ad agency Havas released this campaign that follows a man going about his daily business: taking money out of an ATM, riding an escalator. But instead of using his hands, he uses his tongue. The ads end with, “If you don’t wear a mask, you might as well do this.”

These ads ask whether comedy can be used successfully in pandemic messaging. Can we make light of a pandemic? Does it shame anti-maskers? Does it reward the good judgment of the masked?

Some are saying yes. An article published in December in the peer-reviewed journal Lingua discussed how humor in COVID-19 ads were perceived in Italy last spring. Researchers said advertisements that played off memes or community-based jokes landed much better than advertisements that focused on the destruction the virus has already caused. Advertisements of both sorts proved to be taken better by those in a younger age demographic — who perceive the virus as an inconvenience to their otherwise busy lives — whereas those in older demographics found the jokes to be more offensive, seeing themselves as being at greater risk of falling ill.

Among the many reflections we’ll have in the wake of the pandemic, it’s worth continuing to explore which messages worked the best, and which didn’t. That could make a difference for the next pandemic.