When Isaac Perry Cocke applied for an absentee ballot for the November 2020 elections, he didn’t give it a second thought. The Towson, MD, resident was sure he’d receive it. And he did — in mid-March of 2021, more than four months after Election Day.

By then, Cocke had long since given up on receiving it by mail; he obtained his ballot via the county board of elections site. But other problems related to poor postal delivery are not so easily solved. Last summer, more than 4,800 baby chicks shipped to farmers in Maine arrived dead due to delays in service.

“Usually, they arrive every three weeks like clockwork. And out of 100 birds you may have one or two that die in shipping,” said one Maine farmer. Postal delays have also caused veterans to miss doses of needed medicine and consumers to be penalized for late credit card payments.

At one point in December 2020, the on-time delivery percentage of first-class mail was just 62 percent, more than 24 percent below the on-time delivery rate of the previous year. Critics fault the cost-cutting actions Postmaster General Louis DeJoy instituted in the United States Postal Service last summer.

Those measures included the removal of hundreds of high-volume mail-sorting machines and mail-collection boxes across the country, canceling overtime for mail carriers, and cutting post office hours. (DeJoy also proposed eliminating air mail, which would give service to and from Alaska, Hawaii, Guam, and Puerto Rico the “slow-boat” treatment.)

While DeJoy’s opponents have felt heartened by both the grassroots opposition to his management of the post office — plus having a potential new ally in the Biden administration — they have more ambitious goals than just restoring services which were cut. Many groups want to greatly expand the reach of the Postal Service. 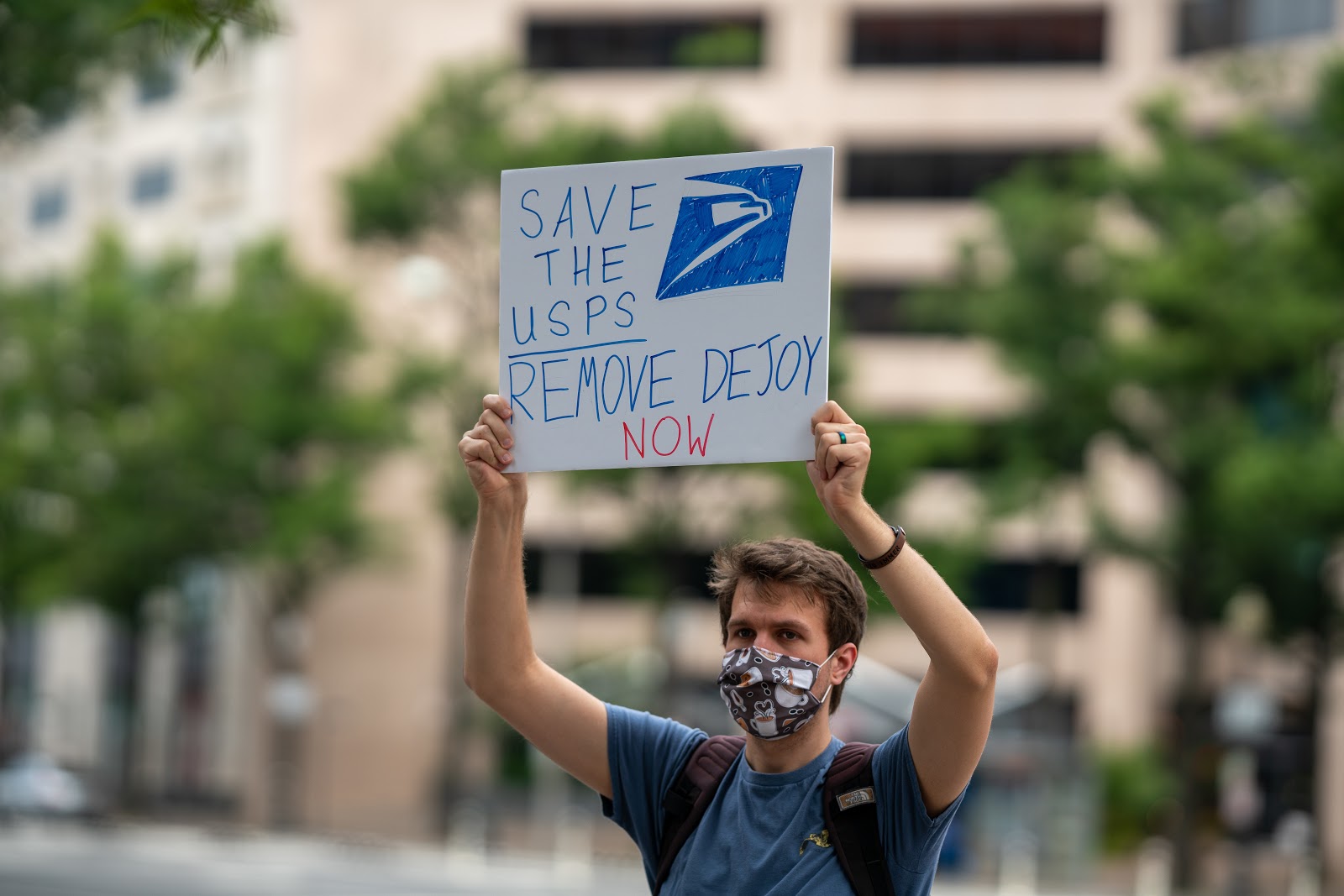 Bank to the Future

One of the more ambitious proposals is to restore postal banking: low-cost financial services offered through the post office to include check cashing, bill payment, savings accounts, and small-dollar loans. Postal banking represents a public option to low-income consumers who don’t have access to traditional commercial bank accounts.

But in light of many of the issues that the Postal Service is now facing, many activists see the resumption of postal banking services as long overdue.

“One in four households is unbanked or underbanked,” said Porter McConnell, coordinator of the Save the Post Office Coalition, a collaboration of 300 groups that formed in reaction to DeJoy’s service cuts.

McConnell — the daughter of Sen. Mitch McConnell (R-KY), whose super PAC was run by Robert Duncan, chairman of the US Postal Service Board of Governors until February 2021 —  pointed out that often the only choices these households have for quick cash are payday and predatory lenders.

“Loans for payday lenders and other predatory lenders are designed not so you pay them back and pay interest quickly, but are designed to keep you in permanent debt and permanently paying,” Monique Morrissey, an economist at the Economic Policy Institute, told WhoWhatWhy.

The Economic Policy Institute is an independent, nonprofit think tank that researches the impact of economic policy on working people in the United States.

McConnell and Morrissey assert that the availability of financial services through a postal bank would short-circuit predatory lenders. They also see postal banking as a potential new stream of revenue that could shore up the Postal Service. One estimate is that postal banking could generate $9 billion in revenue over 10 years. Supporters note that the existing infrastructure to set up a postal bank is already in place.

“There are more post offices than there are McDonalds, Starbucks, or anything else. They are basically the single biggest franchise out there,” said Morrissey.

Some conservatives maintain that if it is unprofitable for commercial banks to provide financial services to certain areas or populations, then the Postal Service won’t find it profitable to do so either. And, they argue, if the Postal Service takes on unreliable, financially insecure customers, other taxpayers may wind up bailing them out.

But McConnell (who takes a very different line on political issues than her father) said that much of the Postal Service’s fixed costs are already paid for, since they have offices in almost every community.

Critics also claim that studies show the main reason the “unbanked” or “underbanked” don’t open up commercial accounts is they simply don’t have enough money on hand to make it worthwhile. A postal bank would not make much difference for them.

Again, advocates disagree, claiming those critics minimize the costs of overdrafts, minimum balances, and other fees imposed on low-income households to get access to their money from commercial accounts.

It’s Not “Too” Progressive…

There is currently legislation in Congress to establish a postal bank. And supporters maintain that the Postal Service does not need congressional action to expand some financial services. They can do that through executive action.

Postal-banking advocates are optimistic about its support in Congress. They cite a 2020 vote by the House to end a 2006 law that required the Postal Service to prefund at least 50 years’ worth of retiree health benefits in the span of 10 years — a politically driven move that, along with the pandemic and other cash-flow problems, crippled the Postal Service’s finances.

“Compared to some of the other issues that progressives want to push in Congress, this is less divisive,” said Morrissey. “People are very supportive of the Postal Service. … It is not going to have the backlash that some other pet progressive projects may face.” 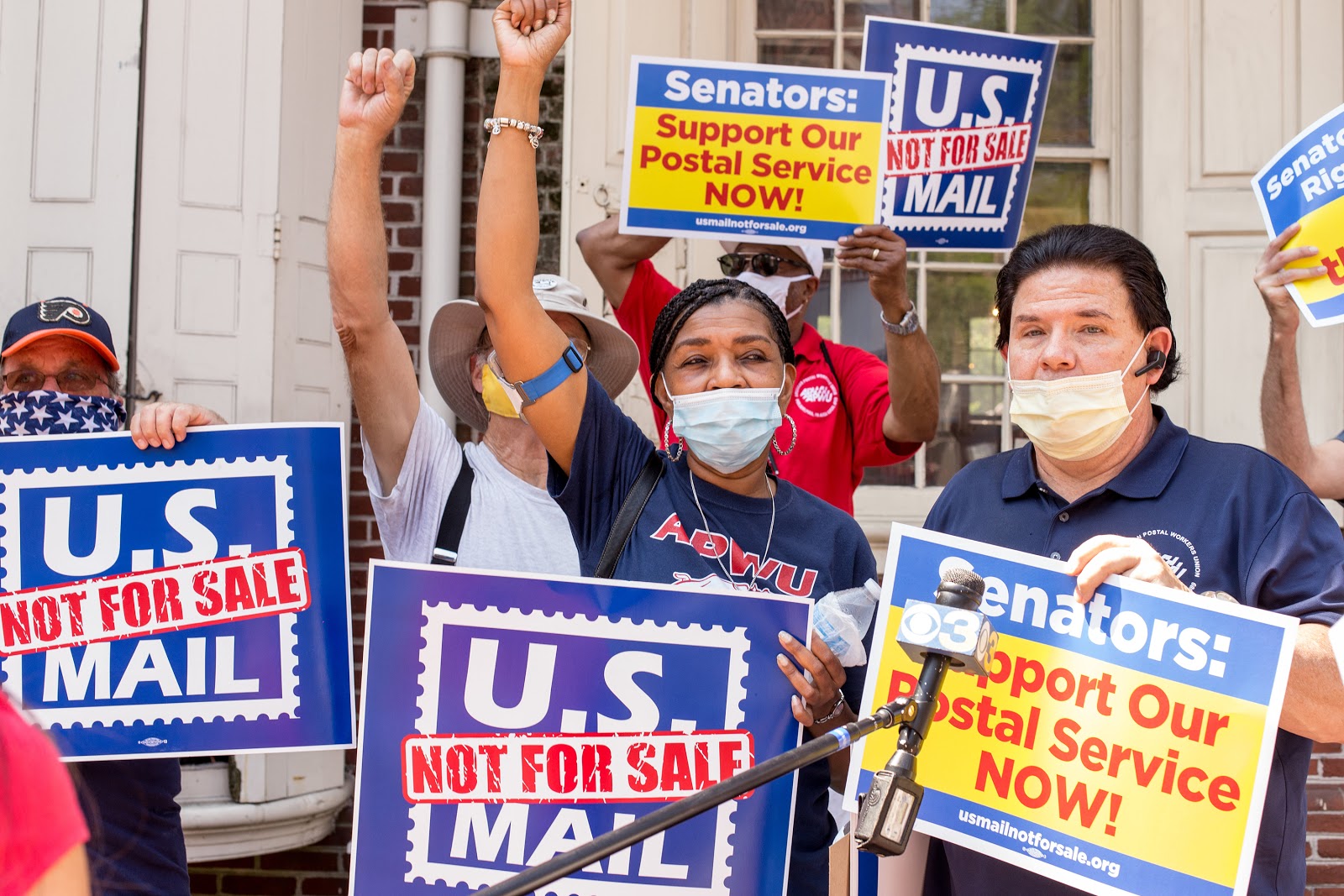 …But It Could Become More Progressive

Nor is postal banking the only ambitious proposal from grassroots activists. They want to transform the Postal Service from strictly a service provider to a community hub and a catalyst for expanding social programs. Some of the other programs these advocates support include expanding broadband access in rural areas, switching to electric vehicles, training employees in contact tracing, and using post offices as community wellness centers.

But before any of these far-reaching proposals can be considered, there will need to be a sea change in the present US Postal Service Board of Governors.

Much of the grassroots organizing around postal issues was a direct result of DeJoy’s severe cutbacks last summer — which, McConnell noted, coincided with the poorer postal performance.

“There has never been a public official who had so much demonstrated cause for removal,” said McConnell. Indeed, postal reformers are counting on Biden’s postal board nominees to be more amenable to their progressive ideas.

The combination of Trump’s defeat, and the public’s growing awareness of the crucial role the Postal Service plays in their lives, has given hope to those who want to transform the Postal Service. The reliance on voting by mail to conduct the 2020 elections only drove the point home.

And, since rural areas rely heavily on the mail for delivery of medicine, the Postal Service has some unlikely allies.

“So, this is a situation where the rural states’ over-representation in Congress is actually a good thing [for the post office],” said Morrissey.

Advocates of postal banking hope that the popularity of the service in traditionally red states, combined with Biden’s new appointments to the postal board, will tip the political scales in their favor.

For McConnell, the fate of the proposal may hinge on a single question: “Do you want to vote against the Post Office?”