In a squalid basement in the self-proclaimed “People’s Republic of Donetsk,” a separatist state in southeastern Ukraine, a Russian intelligence officer proclaimed: “There are no nations, there are civilizations, and the ‘Russian world’ is a civilization.”

The officer had been torturing a 67-year-old religious scholar, Ihor Kozlovsky, who was detained in 2016 for organizing ecumenical, anti-separatist “prayer marathons” in Donetsk, his native city. Kozlovsky spent 700 days in camps where pro-Russian separatists torture, and occasionally execute, pro-Ukrainian activists as well as militants and businessmen who refuse to hand over their assets to the dirt-poor, authoritarian republic.

The officer’s point, Kozlovsky paraphrased in an interview with WhyWhatWhy, was that the ethnic groups that used to be part of czarist Russia and the USSR no longer existed independently, and that Moscow had every right to “get them back.” President Vladimir Putin originally promoted the idea back in 2001, insisting that the “Russian World” extends beyond Russia’s geographic borders.

For many in modern-day Ukraine and other states that were previously within the “Russian World,” that feeling is not mutual. Instead, due to previous tensions and ongoing warfare in eastern Ukraine, many see Russia as both foreign and a threat. As a result, they want to distance themselves from Russianness as much as possible. 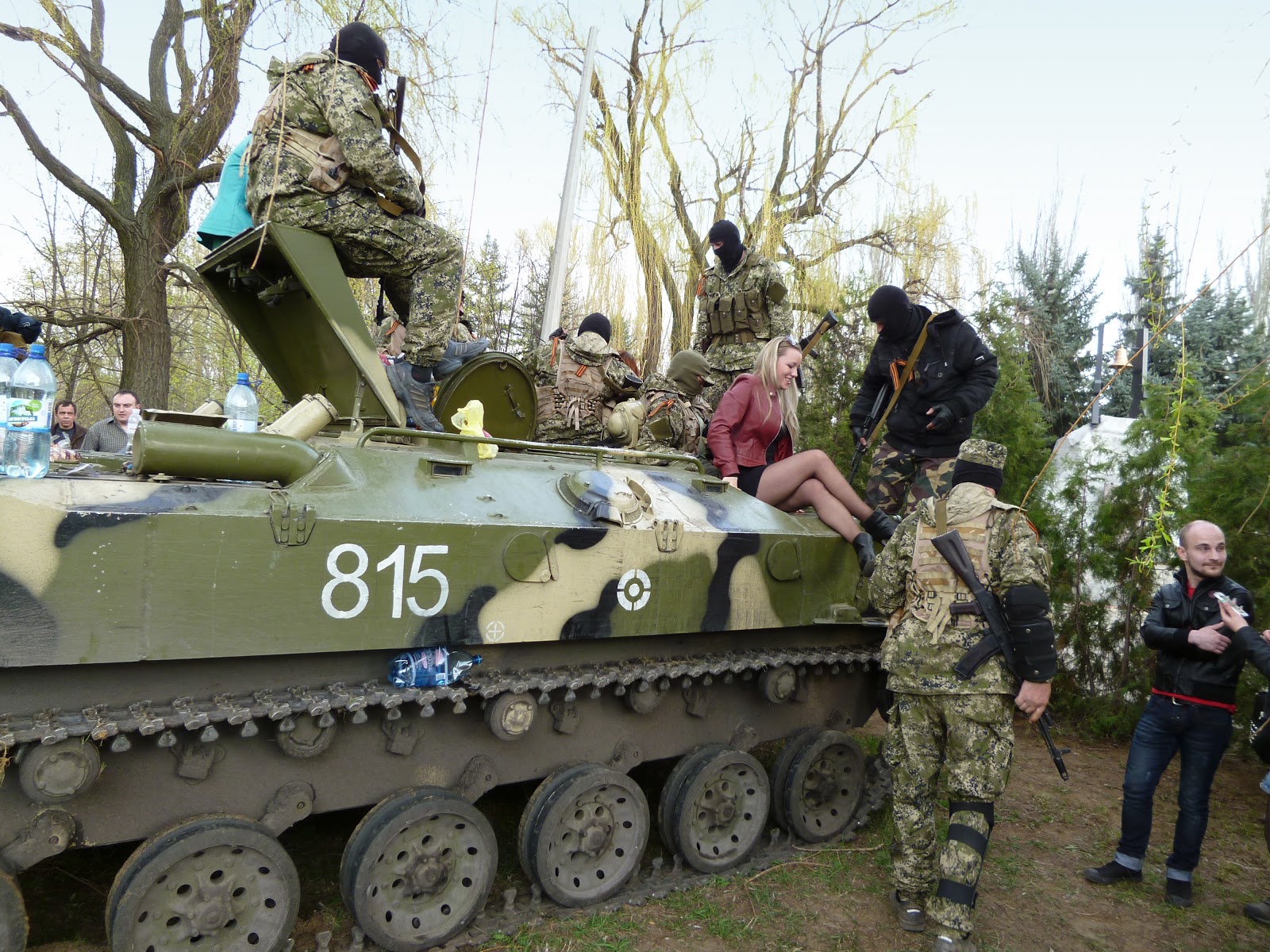 The People’s Republic of Donetsk was formed during the fierce separatist war in eastern Ukraine between Ukrainian forces and separatists militarily backed by Moscow, which has been ongoing since 2014. Hundreds of thousands live with dwindling resources in Donetsk and neighboring Luhansk.

“We’re grown-ups, we need no toys,” Yana, an 11-year-old girl in a war-scarred Luhansk village, told this reporter in 2016. Her father earned $50 a month, the roof of their house leaked badly after heavy shelling, and all she and her two sisters could play with was a worn-out teddy bear and several shabby toys.

Because of this aggression and its results, many in Ukraine see themselves as the “Russian World’s” collective nemesis.

“The more Moscow is fighting for the ‘Russian World,’ the worse off it is,” Kyiv-based analyst Pavel Kazarin wrote in December 2020. “The more active the Kremlin was in militarizing [Russia’s] cultural heritage — the faster the war turns from a decolonization battle into a battle for de-Russification.” Kazarin was pointing to the distinction between resisting state violence — in modern Ukraine’s case, an example would be the USSR’s annexation of western Ukraine in 1939 and subsequent Russification policies — as opposed to disavowing Russian culture, language, and identity, often on an individual level.

Vadim Shapovalov, a freelance software developer in Kyiv, is an ethnic Russian who participated in the 2013-2014 “Revolution of Dignity,” months-long, pro-Ukrainian protests that toppled pro-Moscow President Viktor Yanukovych.

To him, speaking Ukrainian in a country where many speak Russian or are bilingual is a matter of principle. “You’re Ukrainian by language, not by blood,” he told WhoWhatWhy. “You can’t choose your DNA, but you can choose your culture.” 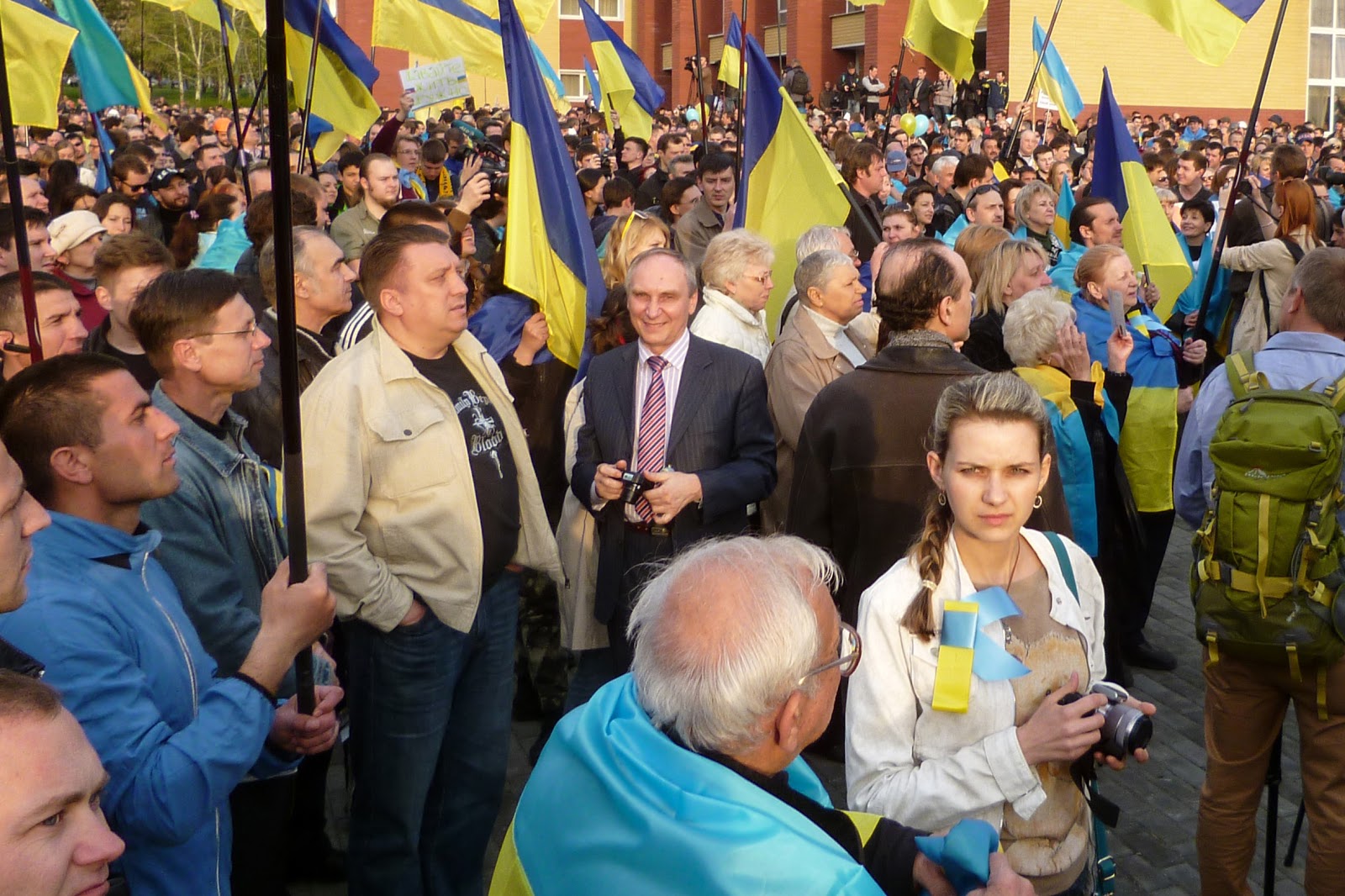 Ihor Kozlovsky (center, in a suit) at a pro-Ukrainian rally in Donetsk on April 17, 2014. Photo credit: Mansur Mirovalev / WhoWhatWhy

Shapovalov is one of 11 million ethnic Russians who live outside of Russia. In fact, Russians form the world’s third-largest diaspora, after Indians and Mexicans, according to the United Nations. Like Shapovalov, many ethnic Russians identify with the culture of the state in which they live.

The difficulty is that cultural Russianness, at least according to the Kremlin, is rooted in Orthodox Christianity and what observers describe as a “hodgepodge” of achievements under imperial Russia and the USSR — some of which are shared by other Slavic groups. For instance, Ukraine is the “Russian World’s” cradle — it’s where warlike Vikings founded Kievan Rus, a medieval superpower that grew and fragmented into what is now Ukraine, Russia, and Belarus. “The roots of this intellectual hodgepodge date back to the late Soviet years, when, on the one hand, Russia’s imperial history became fashionable, and on the other hand, [there was] a powerful myth about Russia’s WWII victory and the first space flight as heritage of that victory,” Pavel Luzin, a Russia-based analyst with the Jamestown Foundation, a think tank in Washington, DC, told WhoWhatWhy. 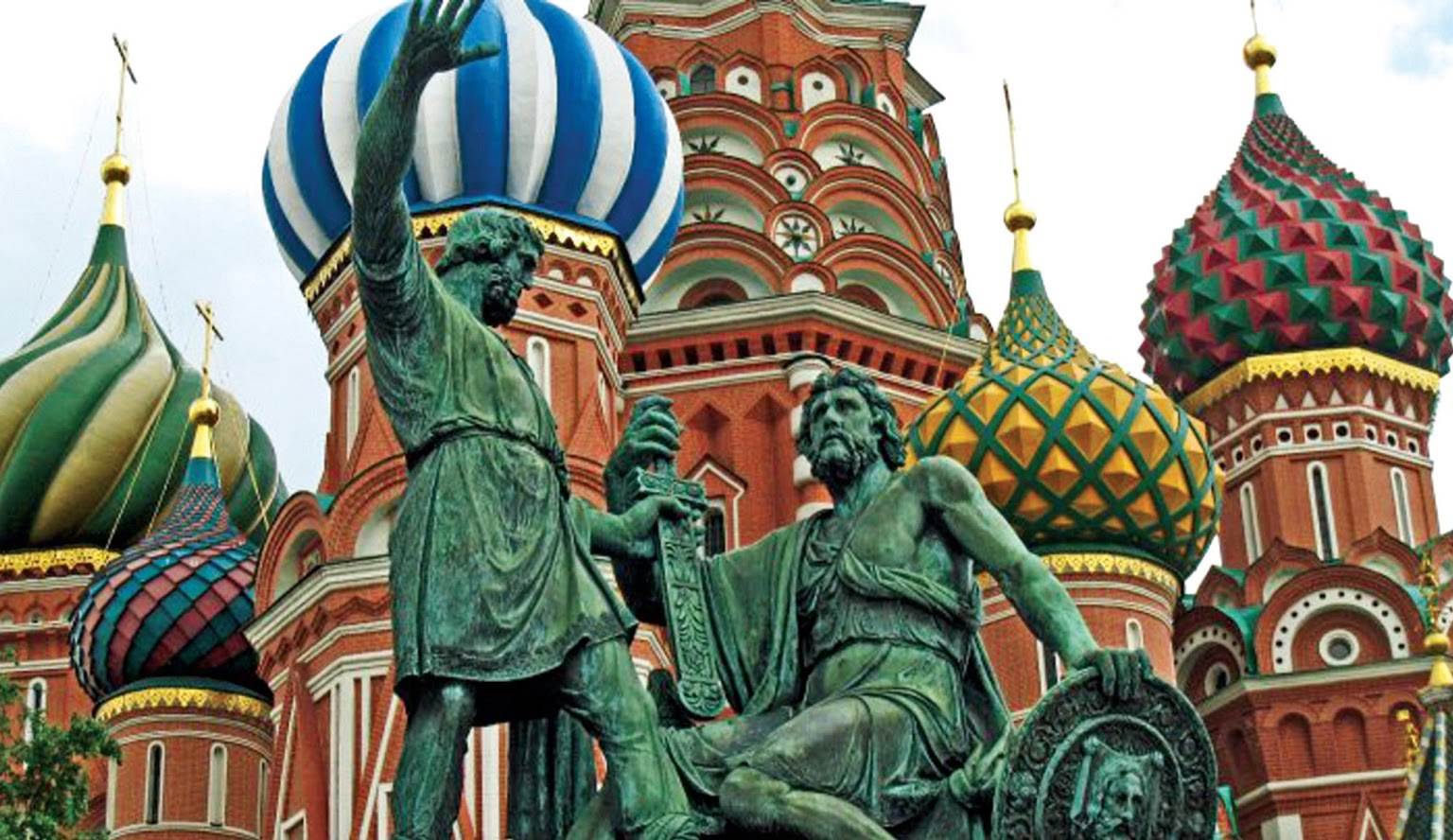 Because of these cultural overlaps and Russia’s deep pockets, Moscow’s soft power works in some ex-Soviet republics.

In Kyrgyzstan, an impoverished Central Asian nation, pro-Kremlin sentiments unite otherwise warring political factions. Russian is the second official language in Kyrgyzstan, although ethnic Russians only comprise about 5 percent of the population. At least a million Kyrgyz labor in Russia or neighboring Kazakhstan.

“Moscow has all the politicians in their pockets,” a senior diplomat from an ex-Soviet nation, who withheld his name, told WhoWhatWhy. “The question is not whether they’re pro-Russian, it is how pro-Russian they are.”

But Putin’s attempts to directly control neighboring states have been limited to Crimea’s 2014 annexation and the backing of separatists in Ukraine and Transdniestria, a breakaway Moldovan republic. The result is that some countries are attempting to “derussify” on a state level. In mid-March, Verkhovna Rada, Ukraine’s lower house of parliament, started deliberating a bill to ban the “Russian World” ideology that they see as “a serious threat to regional and global security.” 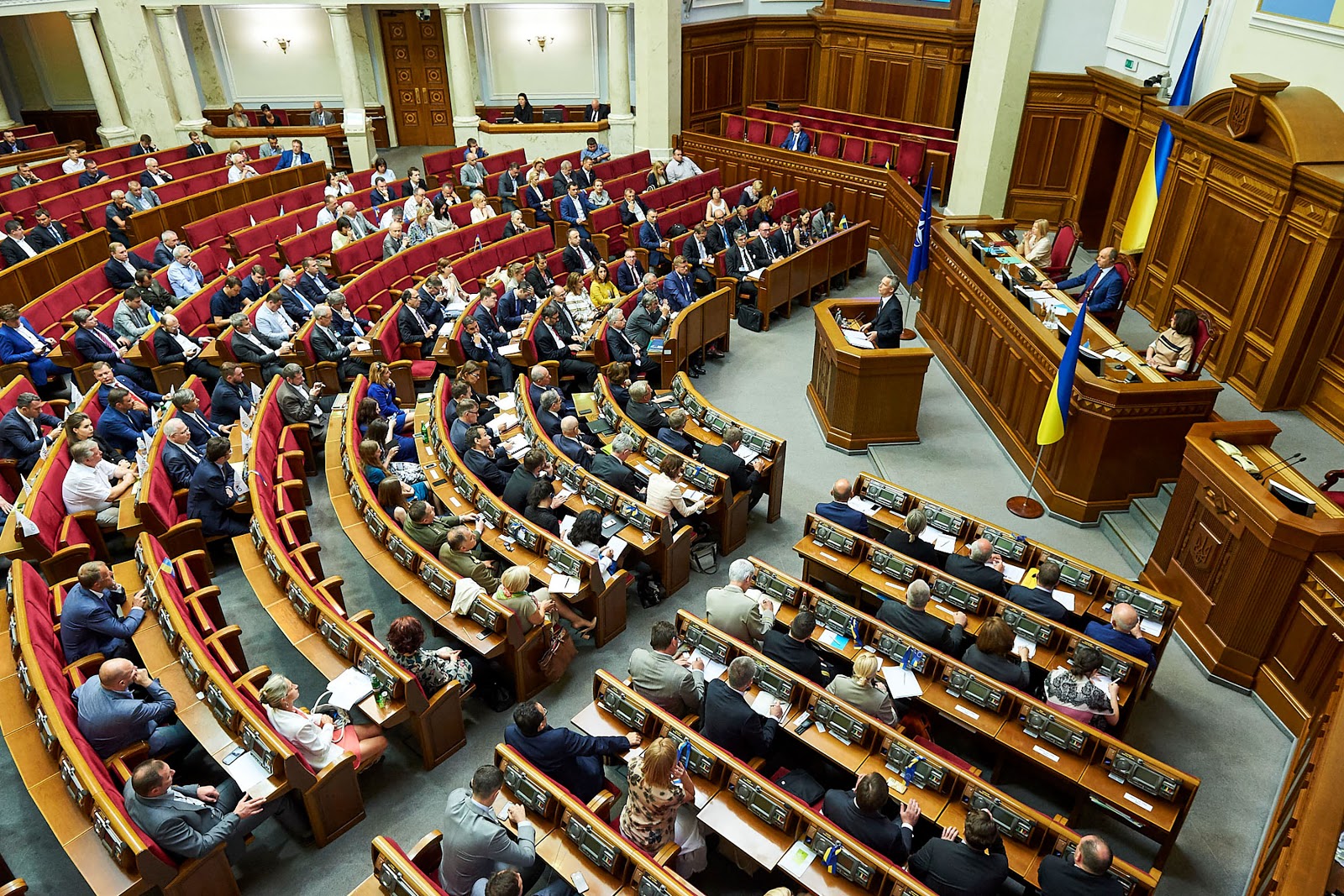 Moreover, some of the “Russian World’s” stalwarts are now disillusioned.

One of them is Valentin, a jovial, bear-like 48-year-old driver with a mop of fair, curly hair who worked with this reporter in Donetsk between March and July 2014.

At one point, he recalled, he was ecstatic about the separatist uprising that he hoped would make Donetsk part of Russia. “I thought we would be like Crimea, that Putin would come and make things right,” Valentin, who withheld his last name, said.

Valentin lost his life savings after corrupt officials from the pro-Russia Party of Regions took over his furniture shop. Then, within months, he witnessed how Donetsk turned into a bastion of terror.

He saw a pro-Ukrainian woman beaten by an angry mob and heard gunfire at night. AK-47-toting militants forced him out of his Ford minibus, and he got it back only because his childhood friend was a senior commander.

Valentin sent his wife and two daughters to Kyiv and joined them after a stint with the television crew this reporter worked with.

One response to “Russia’s Influence Abroad Is Slipping”