We All Love a Hemsworth, But Celebrities Shouldn’t Get to Cut the Line - WhoWhatWhy
Reading Time: 5 minutes

We now have official evidence that it is impossible to utter a bad word about the Hemsworth brothers.

On March 10, the New York Times published an article, “In Australia, Hollywood Stars Have Found an Escape From the Virus. Who’s Jealous?” Jealousy is not the feeling I feel. It is rage.

The piece details how Australia’s COVID-19 response made the island nation a paradise for celebrities and the productions that love them:

“These Hollywood stars have been transported to another world where the problems of this world aren’t,” said Robert Thompson, a professor of popular culture at Syracuse University in New York. He added that the temporary exodus from the United States revealed a further crumbling of the myth that Hollywood was the endgame for celebrities.

Australia’s borders have been closed to all without special exemption since March 2020 as a method of controlling the spread of COVID-19. But, as the story details, for those who can afford it — and coincidentally are an economic boost to Australia’s film industry — the door remains open.

My gripe is not with the film industry. Hell, it’s not even with the celebrities themselves. My issue is with the system that allows the wealthy to come and go as they please while 40,000 Australians remain unable to return home due to the border closures. My issue is with a system that allows those who can afford it to flee due to COVID-19 fears, but not those who are trying to escape political persecution. My issue is that a story like this focuses on Zac Efron’s mullet and Natalie Portman’s amazement about parrots, but hurries through the fact that “some Australians grumble that the country’s strategy for stamping out the virus has left tens of thousands of citizens stranded overseas.” Yes, we may have, as Melissa McCarthy points out, spiders the size of heads, but that obscures the systematic failures of Australian immigration policies and the dark side of Australia’s “successful” COVID-19 strategy.

I’m not an unbiased party. I was living and studying overseas when the pandemic hit, and was one of the lucky ones who made it home before it became nearly impossible. My brother, an expat who I haven’t seen in almost two years, lives in New York, unsure when his home country will allow him in to see his family again. But I am also an advocate of human rights. Denying the right of return to your citizens, or the right to seek asylum, is a violation of those rights.

The Times article reported that celebrities have been relieved of the burdens of social distancing and face masks due to Australia’s relative success in flattening the curve and effectively eliminating the virus from its shores. I can’t blame them — life is almost normal here. I go to bars and restaurants. I hug my grandmother without worrying that I might infect her. But my country has become the personal playground for anyone with a private jet and two weeks to spare in quarantine. 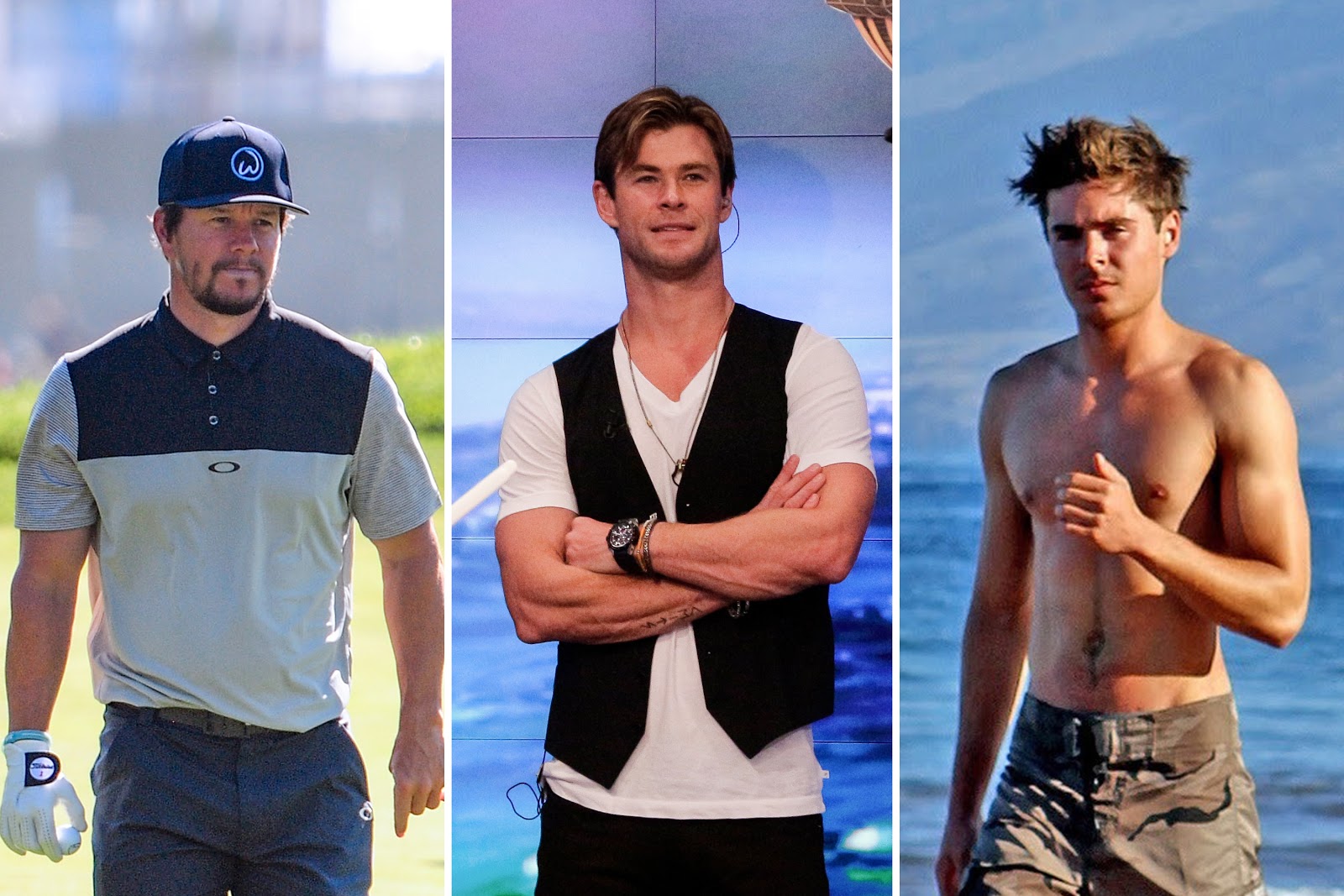 Australian actor Chris Hemsworth has been a longtime advocate for growing the film industry in Australia, a country with beautiful landscapes and a huge pool of local talent that is often lost to “brain drain.” As the Times notes, “The Australian Border Force said that travel exemptions for film and television productions were ‘considered where there is evidence of the economic benefit the production will bring to Australia and support from the relevant state authority.’” Granted, this is true. Since Zac Efron settled in Byron Bay early in the pandemic, he has filmed an original series for Australian streamer Stan, Gold, in Adelaide. We’ve also seen Liam Neeson, Mark Wahlburg, and others make the trip Down Under, too. One can only assume that with these migratory patterns, the industry opportunities will continue to grow.

Of course, this is not a bad thing. Of course, the local industry should seize the opportunity. But what does this say about us as a nation, and the price we’re willing to pay for economic prosperity?

Australians attempting to return to Oz have been stymied due to limits on the number of international arrivals following the second wave of COVID-19, in part due to failures in the mandatory hotel quarantine system. (Incoming celebrities could pay to bypass the hotel quarantine and spend their two weeks of isolation in a secluded beach house, as Wahlburg reportedly did.)

Problems worsened as flight prices skyrocketed, with airlines canceling economy tickets in favor of business-class seats. A campaign, “Remove the Cap,” was launched last year, allowing stranded Australians to share their stories as they wait for a confirmed flight. (The plight of the 40,000 stranded Aussies receives a brief mention in the Times article, including an interview with one involuntary expat, but it’s clear the story is more interested in the pretty people.) 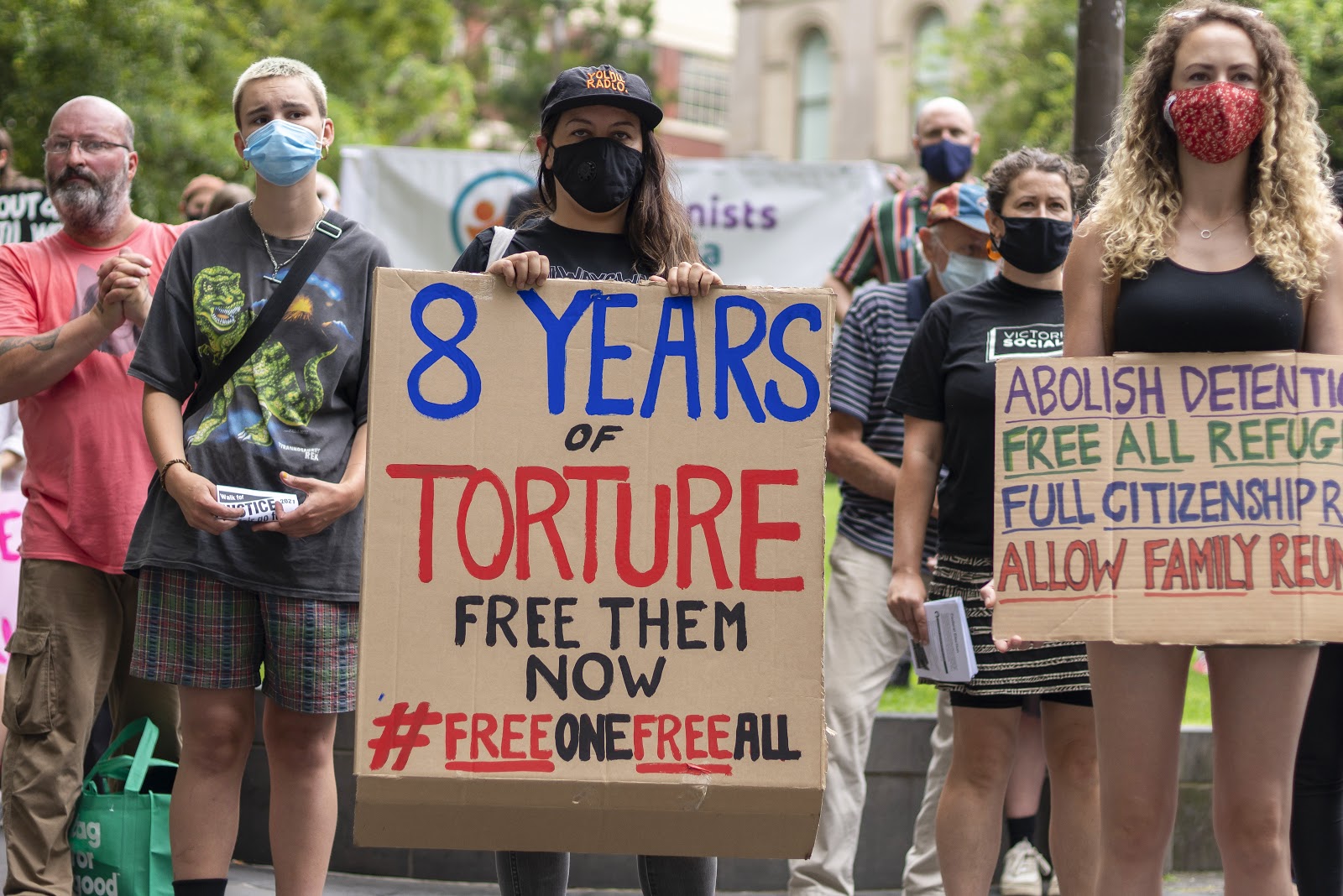 Rally called by the Refugee Action Collective in Melbourne on February 20, 2021, as part of the ongoing fight to free the Medevac refugees currently being detained in Park Hotel, Carlton and elsewhere in Australia. Photo credit: Matt Hrkac / Flickr (CC BY 2.0)

The story only gets darker when we look at inequities in the Australian immigration system. Over the past decade, thousands of refugees have been held in offshore detention on Christmas Island, Nauru Island, and Manus Island — some for more than seven years. For over 1,000 days now, a family from Bioela, a rural Australian town, has been held on Christmas Island after their protection visas were denied. The two children are Australia-born.

It’s difficult to watch celebrity after celebrity flee to Australia under the guise of a work visa while the most vulnerable are kept out. I’m not willing to concede that there is one rule for them and another for the rest of us. It’s the denial of basic citizenship rights. My brother’s passport makes a better coaster at this point.

Reading the Times article, I expected a scathing critique of celebrity culture and Australian federal policies. Instead, what was projected to the world was an exclusive party — to which my brother and the thousands of other stranded Australian expats — are not invited.