Long before COVID-19 vaccines were developed, rich countries began making plans to hoard them. This in turn has forced poor nations to hope that billions of excess doses trickle down before their economies collapse.

In April 2020, the World Health Organization launched an initiative called COVAX, described by the WHO director as a collaboration “to accelerate the development, production and equitable distribution of vaccines, diagnostics and therapeutics for COVID-19.” Except for the United States and Russia, nearly every nation began buying into the plan right away (Russia prefers to donate doses directly).

But the ambitious, byzantine plan has struggled with funding, with countries and companies abandoning advanced purchasing agreements and being outbid for doses by wealthy nations.

“Poor countries should not be forced to wait for vaccines to trickle down to them,” Max Lawson, Oxfam’s head of Inequality Policy, said in a statement on February 19. “Between them, G-7 nations have secured enough vaccines for every one of their citizens to be vaccinated three times over, while many poor countries are yet to receive a single dose.”

What began as a hedge when it was unclear which vaccines would pan out has become a newfangled symbol of inequality. The tendency of rich countries to keep new treatments for themselves, dubbed “vaccine nationalism,” was a catalyst for COVAX. But this hoarding hasn’t just undercut the program’s equitable aims. It has jeopardized the entire world’s recovery. Resistant variants continue to emerge wherever COVID-19 is allowed to linger, which then spread to countries stockpiling vaccines.

Last November, Duke University published a study warning of a “rich country shopping spree” that was “effectively undermining [COVAX] by negotiating ‘side deals’ for large vaccine shipments that will ‘result in a smaller piece of the pie available for equitable global allocation.’”

The United States, the world’s top vaccine hoarder, has insisted all Americans have access to a dose before it makes any international donations available. It’s not alone in this policy, which may be good politics domestically but is short-sighted in a global pandemic.

Vaccines for All, in Theory

COVAX is central to a wide-reaching program called the ACT Accelerator (short for “Access to COVID-19 Tools”), which is designed to deliver pandemic relief across the globe. The program was created in April by a group of global health organizations and funded mostly by donations from the richest states and philanthropists.

By joining, countries agreed to purchase doses through the program, a single-payer system, to drive down the price. COVAX still aims to vaccinate 20 percent of each participating country by the end of this year, and though they envisioned the recipients as the most vulnerable, countries have full discretion on how to use the shots. While it’s a start, 20 percent will not be enough for nations to achieve herd immunity and contain the spread of the virus.

Among the 190 countries that have joined, 92 of the poorest (those with a gross national income per capita below $4,000) are supposed to pay using money from a separate fund. With the most recent large donations, this fund has $6.3 billion, enough to deliver 1.3 billion doses this year to the “most vulnerable populations in the poorest economies in the world.” 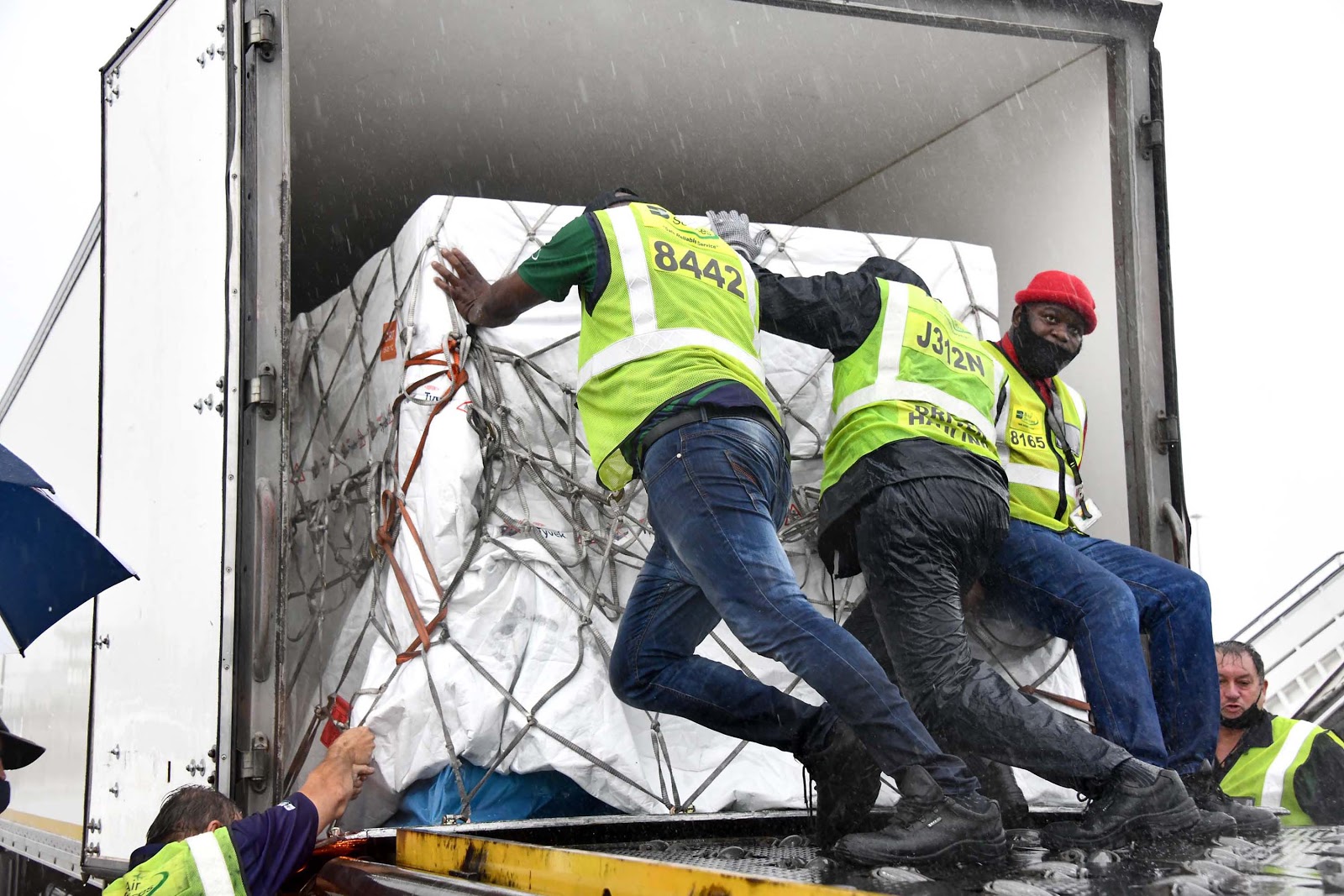 But even with this influx of cash, limited supply is the main challenge. Many of the countries rhapsodizing about cooperation and cutting big checks are buying up scarce resources.

“If there are no vaccines to buy, money is irrelevant,” said Tedros Adhanom Ghebreyesus, WHO’s director general, during a February 22 press conference. “Even if we have the funds, we can only deliver vaccines to poorer countries if high-income countries cooperate in respecting the deals COVAX has done, and the new deals it is doing.”

And that’s because even where it does have deals on doses, it’s not clear where COVAX, the world’s third-largest vaccine buyer, stands in line to receive them, since many of the contracts allow producers and countries room to back out for better offers. The plan’s purchasing arm, the COVAX Facility, has ordered 1.1 billion doses, compared to 4.6 billion ordered by wealthier nations. It hasn’t helped that the first two vaccines to hit the market were both expensive and have to be stored at ultra-cold temperatures, making them unrealistic options for most low-income countries. Under pressure, Pfizer made a modest deal with COVAX in January, but its requirements have delayed the rollout. Moderna has held out, despite having promised equitable access.

The order in which the doses are doled out depends in most cases on what a country has done for the drugmaker. Rich nations were able to donate to research and development, giving them first dibs. Some middle-income countries like India and Brazil have successfully leveraged their manufacturing capacity to become major buyers. And places like Peru, with a relatively robust health care infrastructure, have hosted clinical trials to secure their share.

Experts have warned that with side deals the norm, poor nations likely won’t have widespread vaccinations until 2023, if at all. In a not-so-distant future, the wealthy may find themselves in a familiar situation: watching from home as far-flung correspondents file footage of the world’s poor languishing from a preventable disease. Only this time, it could be on a more grotesque scale than ever before.

But in recent days, the plan has seen some upswings. On February 24, Ghana received the first doses delivered through COVAX, and on March 1 the country’s president became the first person in the world to receive a shot from the plan, followed by his wife. Around the same time in Côte d’Ivoire, after a high-ranking official went first, dozens of health care workers received theirs as well.

On the financial side, on February 18 — nearly a year after it was launched — the United States joined the scheme, announcing a $4 billion commitment, with half that amount delayed until other donors kick in more. On the same day, French President Emmanuel Macron told the Financial Times his country will donate 5 percent of their doses to COVAX, urging other EU countries to follow suit. The UK’s Boris Johnson promised the next day to donate most of Britain’s excess doses to the plan.

All told, COVAX ended the day about $5.8 billion richer, as the total contribution by the G-7 reached $7.5 billion. But the overall global effort to pay for developing countries’ health care needs is far short of COVAX’s fundraising goal.

Rich countries will soon have 1 billion more doses than the sum of their entire populations, enough for every adult in Africa, according to an analysis by ONE, a group that tracks extreme poverty. The study called on Australia, Canada, Japan, the United Kingdom, the United States, and the European Union to promptly adopt COVAX’s framework for donating doses, which asks countries to give a share every quarter once they’ve vaccinated their most vulnerable. This could still happen, as most “purchased” doses exist on paper only.

“Progress on vaccinations has been wildly uneven and unfair. At this critical moment, vaccine equity is the biggest moral test before the global community.”

The Big Business of Pandemic

However, with the purchases already made, the focus for aid groups has shifted to what they think offers the quickest solution: removing intellectual property protections. In an emailed response to WhoWhatWhy, Oxfam spokesperson Tricia O’Rourke said: “The biggest barrier at the moment is the pharmaceutical company monopolies, as they are protecting their exclusive rights and preventing sufficient doses being produced at scale.”

O’Rourke was referring to a bid at the World Trade Organization that India and South Africa launched to lift patent protections on vaccines. While the effort has a wide coalition of backers from civil society, organized under the name “People’s Vaccine,” the proposal is unlikely to go anywhere, given firm opposition by the West and the effective veto power members have. Defenders of the pharmaceutical industry have even suggested this effort is designed to allow profiteering from knockoffs.

“Progress on vaccinations has been wildly uneven and unfair,” UN Secretary General António Guterres told the Security Council on February 17, during its first meeting on vaccinations. “At this critical moment, vaccine equity is the biggest moral test before the global community.”

“The Fastest and Smartest Way to End the Pandemic”

Even if fully funded, COVAX is far from perfect. Critics in the scientific community have pointed out that allocating vaccines by population ignores the varying severity of national-level outbreaks. Yet, like many endeavors inside the UN’s orbit, it’s the only framework the world has with any significant buy-in.

And vaccines themselves aren’t a silver bullet. Many countries will require syringes, glass vials, a dedicated freight network, refrigerators, training for medical staff, and more. By February, the ACT Accelerator announced its fundraising target for vaccines, test, diagnostics, and coordination of health systems totalled $27.1 billion.

“This isn’t charity,” the WHO’s Tedros said while fundraising last year. “It’s the fastest and smartest way to end the pandemic and drive the global economic recovery.”

Compared to the $11 trillion G-20 countries spent on stimulus during 2020, the remaining gap is a fraction. Furthermore, on the current path, the global economy is set to lose $9.2 trillion, half in developed countries, according to a study by an international business organization. Considering these ripple effects, the WHO argues that fully funding the accelerator would pay for itself in “less than 36 hours once global mobility and trade are restored.”

In the meantime, some countries are missing payments to COVAX, and therefore are being left out: Venezuela missed its chance due to late payments, and Iran can’t find banks willing to apply for complex waivers on US sanctions to make its payments either.

As it stands, only 10 percent of people in poor nations will receive a vaccine this year, according to aid groups like Oxfam and Amnesty International. In the end, sorting out how to deliver rich countries’ excess doses may be COVAX’s greatest achievement. And if they can manage that, a growing moral and economic catastrophe could be averted.

2 responses to “‘Vaccine Nationalism’ Leaves Poor Countries in the Lurch”