Now, as the US rejoins the international accord, the Biden administration faces politically difficult but urgent work ahead.

“If we did everything set out in the Paris Agreement — and we’re not — but if every country delivered, we’d still see a warming on planet earth about 3.7 degrees centigrade, which is just catastrophic,” said John Kerry, the US special presidential envoy for climate, at a Zoom event marking the occasion.

Nine years is all the world has left to avoid the worst impacts of climate change, Kerry said in an interview with CBS News.“There is no room for BS anymore,” he said. “There’s no faking it on this one.” Kerry was referring to climate scientists’ calls to cut global emissions in half by 2030, which the European Union says it’s prepared to do. Critics say that goal is already out of reach.

The 2016 Paris Agreement, a nonbinding, executive-level arrangement, allows countries to determine their own goals, called nationally determined contributions, every five years. There are no penalties for missing targets, and there is no way to enforce them. Those omissions were meant to appease US conservatives, who criticized the agreement’s predecessor, the Kyoto Protocol, for legally binding developed countries but not developing ones.

During his campaign for president, Biden proposed a goal of 100 percent clean electricity nationwide by 2035, and pledged to reduce carbon emissions to net-zero by 2050. Biden is now expected to formally announce his goals on fossil fuel emissions by April 22, when he’ll host world leaders for a summit on Earth Day, leading up to the annual UN Climate Change Conference in November.

Biden began the process of rejoining the Paris Agreement through an executive action on his first day as president, at the same time ordering all federal agencies to review and reverse more than 100 environmental rules that had been rolled back under Donald Trump. His team has emphasized an “all-of-government” approach to addressing climate change, from foreign policy to monetary policy. Even the Department of Defense has begun incorporating climate change into war games. 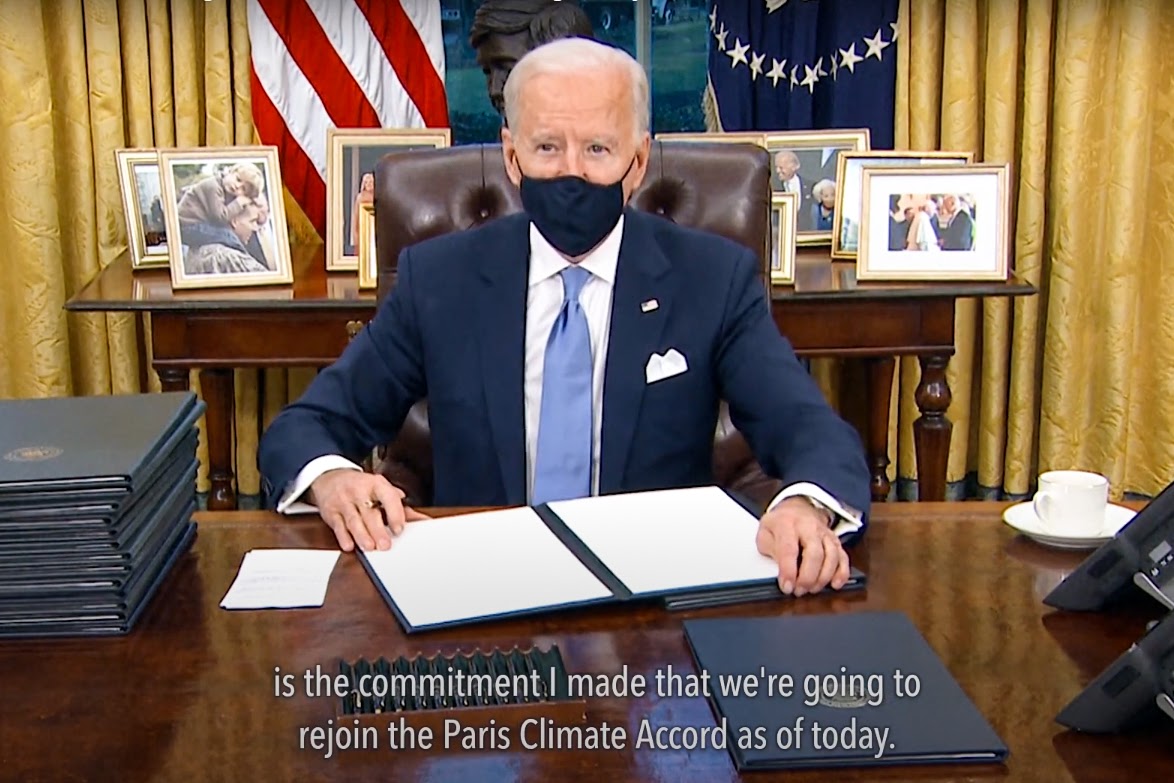 President Joe Biden signed a raft of executive orders on his first day in office, including a decision to rejoin the Paris Agreement. Photo credit: VOA News / YouTube

“There was no contribution from the US government” to fight climate change during the Trump administration, UN Secretary General António Guterres said during a news conference on February 18. “But I think it’s important to say that when one looks at the American society — and today, governments have much less power than in the past — we have seen a fantastic mobilization of the private sector, of the cities, of some states, and the civil society as a whole. And that has allowed the situation that we have today, in which the US is still on time to be fully on track for the net-zero in 2050.”

Executive actions from the president, combined with state and local laws, may bear the most fruit, Michael Gerrard, founder of the Sabin Center for Climate Change Law at Columbia Law School, told WhoWhatWhy. “The administration already has considerable authority with respect to emissions by motor vehicles, which are the single largest source of greenhouse gas emissions in the United States,” he noted.

In addition, Gerrard said, the administration has existing authority from Congress to regulate leaks in oil and gas production, create a new agency to regulate hydrofluorocarbons, and require publicly owned companies to disclose climate change impacts as part of securities filings. “There’s a fairly broad array of actions the government can take without further legislative action,” he said.

Gerrard also pointed to Biden’s authority to pass a moratorium on fossil fuel extraction on federal lands, saying he signaled a potential move in this direction by pausing new leases. On his first day in office, Biden also revoked the Keystone XL Pipeline construction permit, a move activists had pressured him to take.

Facing Obstacles From Within

Biden’s climate policy is centered on his $2 trillion “Build Back Better” jobs and infrastructure plan, but his latest pandemic relief package, which already is tied up in Congress, may eat away at the political will to allocate more funds.

While Republicans are unlikely to budge on climate issues, Biden is also likely to run into opposition from some in his own party in the evenly split Senate. Joe Manchin, the Democratic senator from West Virginia who once boasted of suing the Environmental Protection Agency and literally shot the cap-and-trade bill limiting carbon emissions in a campaign ad, now chairs the Senate Energy and Natural Resources Committee, which oversees coal regulations. Manchin publicly praised Trump’s decision to leave the Paris Agreement and questioned Biden’s decision to rejoin it.

However, since Manchin is ultimately motivated to pursue what is best for West Virginia, he may be angling for federal aid to his state in exchange for passing legislation that addresses climate change, Gerrard said.

Biden will hope to avoid a repeat of President Obama’s first major legislative setback, when a bill to reduce emissions was scrapped after being rejected by some in his own party, which controlled Congress at the time. The next time Obama sought major climate action, during the negotiations on the Paris Agreement, Kerry, then secretary of state, bypassed the Senate entirely by making sure the text said countries “should” have emissions targets, rather than “shall,” a one-word change that took away the pact’s legal effect.

It may take executive actions, along with state and city laws, to push the country toward an electrified future, which experts at Princeton University say is the most viable path to achieving net-zero emissions by 2050. The researchers, who last year published a widely cited road map, have said in the next 10 years the US needs to add 50 million electric vehicles and quadruple the country’s supply of wind and solar power, which have become less expensive in recent years. In a sign of how the private sector is moving more quickly than the federal government, General Motors Co. recently announced it expects to stop selling gasoline-powered vehicles by 2035.

What the World Wants From Us

Guterres says establishing near-term goals is one of the two most “fundamental” priorities the world needs from the United States. The other is using its vast wealth and technological capacity to make it easier for other countries to follow suit. As part of the original Paris Agreement, the US promised $3 billion a year to developing countries so they could adapt their energy systems. It has provided only a third of that so far, but Kerry says it will meet the target. Developed countries overall pledged to spend $100 billion on green transition programs for developing countries annually by 2050.

Currently, 126 countries have pledged to reduce carbon emissions to net-zero by 2050, with nearly half of them making the pledge last year. Those nations represent 63 percent of global carbon dioxide emissions, 15 percent of which come from the US, the world’s second-largest emitter. China is the world’s largest greenhouse gas emitter. At the same time, several countries that rank in the top 10 for carbon dioxide emissions do not have any net-zero commitments. Those include Russia, Saudi Arabia, Iran, and Indonesia, according to the UK-based nonprofit Energy & Climate Intelligence Unit.

China made waves last year by announcing a goal of net-zero emissions by 2060. Nevertheless, the country has continued to ramp up domestic and international investment in coal-fired power plants, which pollute more than any other energy source if emissions are not captured. Pushing China to go further will be among Kerry’s greatest challenges, with some China hawks already arguing that the US under Biden will put more emphasis on climate change than on trade and human rights concerns. China has made it clear that “overall US-China relations” affect its climate change cooperation.

Scientists say the urgency for action on climate change is growing clearer each year. 2020 was the hottest year on record, with wildfires blazing across Australia, Europe, and the West Coast of the United States, and floods and locusts destroying crops in East Africa. At the same time, some scientists maintain that climate change also is the driving force behind the current record-setting cold weather in Texas, with a warming Arctic pushing cold air southward.