In early January, former Acting Secretary of Homeland Security Chad Wolf celebrated the completion of 450 miles of border wall, claiming that it made “America safer and more secure.” Shortly thereafter, on his first day in office, President Biden issued a proclamation halting border wall construction and ending Trump’s controversial declaration of a “national emergency” used to fast-track construction. Biden’s proclamation gave federal agencies 60 days to come up with a plan to end or repurpose contracts with private contractors engaged in building the wall. It said nothing about removing the sections that already exist.

US Customs and Border Protection’s website shows that the wall in the Tucson sector, which includes Organ Pipe Cactus National Monument, has been completed. Now, activists want to see the wall come down so that the natural migration of desert fauna can be free and open once more. 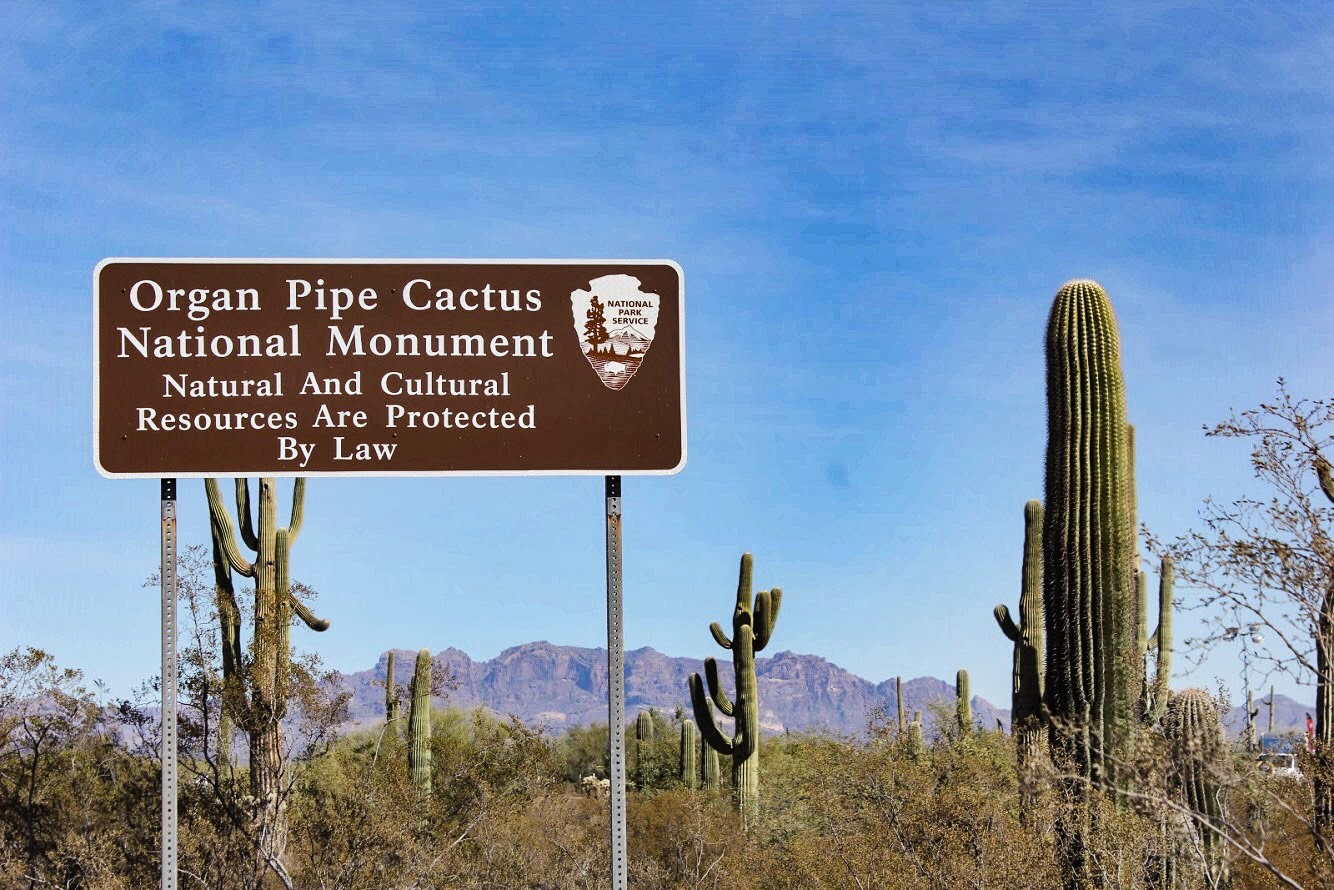 Without quick action from the Biden team, the monument’s plant and animal life could spend generations struggling to survive before the land fully heals. Once a thriving desert ecosystem known for its eponymous cacti and rich archaeological history, the 330,000-acre UNESCO biosphere reserve is now decorated with tall piles of concrete slabs and uprooted saguaro cacti. The Border Patrol continues to assure concerned Arizonans that the cacti will be replanted, but many news outlets have already reported on their deliberate destruction.

Saguaros, the world’s largest cactus, can live up to 200 years and are protected by Arizona law. Tohono O’odham Nation councils have passed a resolution noting that the saguaro is essential to O’odham spirituality, and urging state and federal agencies to “begin healing the cultural, spiritual, and ecological wounds caused by saguaro destruction” by removing the wall and restoring native vegetation damaged along the border.

Native Americans are equally infuriated by the drying up of Quitobaquito Springs, a 16,000-year-old freshwater desert oasis 13 miles west of the Lukeville, AZ, port of entry. The springs, of deep cultural importance to the Hia-Ced and Tohono O’odham tribes, have sunk to record-low levels in recent months because contractors have used the water to mix concrete. The Sonoran mud turtle and Sonoyta pupfish, endangered species that live in the springs, are being put at further risk by the shrinking of their natural habitat.

“What was so sacred to [the Hia-Ced O’odham] was water,” said Christina Andrews, chairwoman of Hia-Ced Hemajkam, an organization fighting for federal recognition of the Hia-Ced O’odham (the Hia-Ced are part of the Tohono O’odham Nation, but are a distinct tribe). “We followed the water. That’s why the pond at Organ Pipe is so important to us. That was a place of refuge for us, where we would have our ceremonies and unite to revive ourselves.”

Andrews has a personal stake in the fight for immediate restoration of the land that her family has been occupying “since time immemorial.”

Gary Nabhan, an agricultural ecologist and ethnobotanist whose work focuses on biological and cultural diversity in the Southwest, agrees. “For border residents, especially for Native Americans who lived in this area before the border was built,” he told WhoWhatWhy, “the damage to aquifers, streams, and springs by the pumping of water for the wall not only has to stop, but there has to be full participation from communities in immediately returning access to that water and trying to heal those damaged aquifers.” 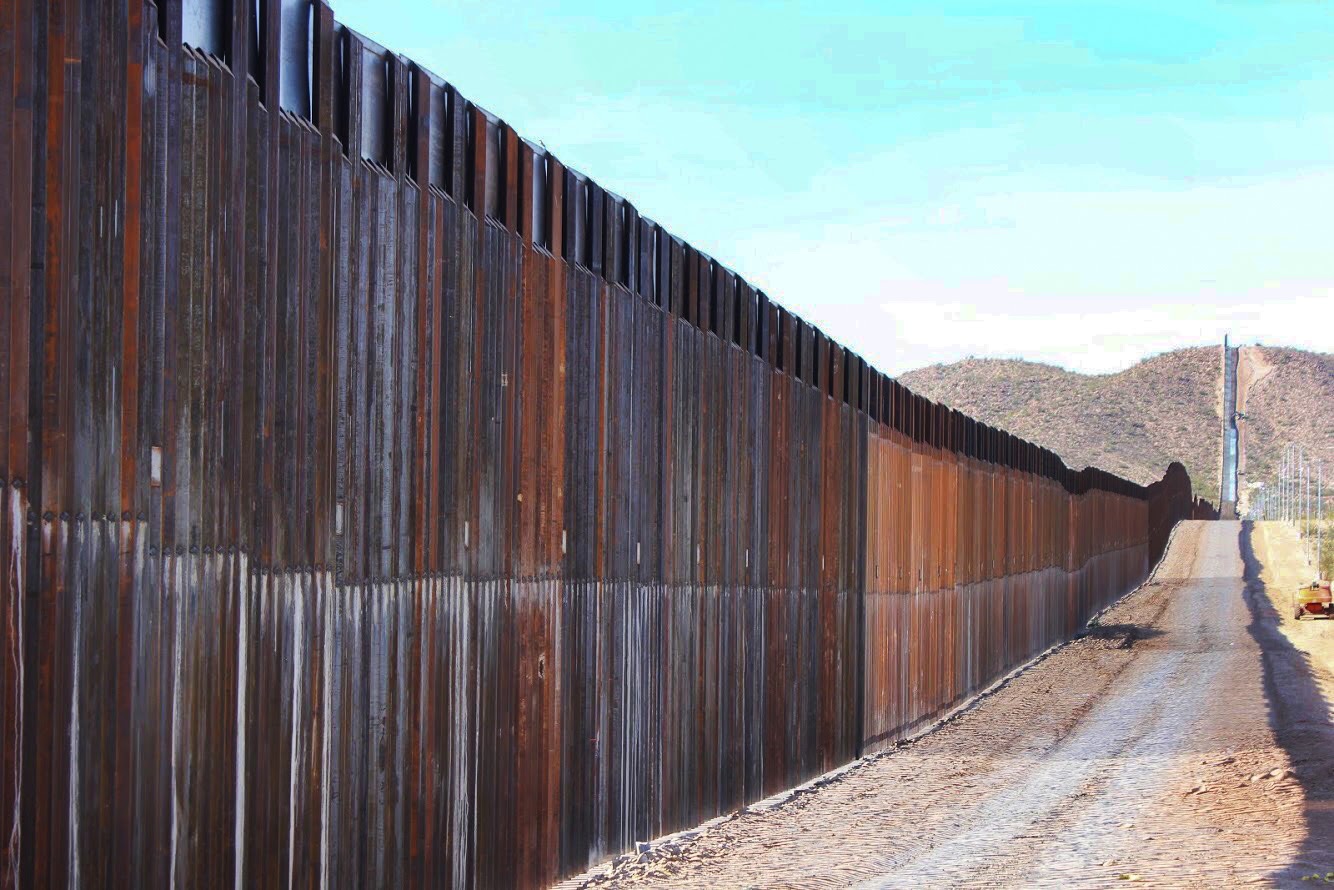 The wall snaking through Organ Pipe Cactus National Monument presents an obstacle not only to people but to wildlife. Photo credit: Marisa Latzman / WhoWhatWhy

The springs aren’t the only sacred site that has been put at risk in the hasty pursuit of heightened border security. In February 2020, the Intercept reported that contractors were blowing up portions of Monument Hill, an ancient O’odham burial site, to place 30-foot steel bollards in the rugged terrain. Videos of the destruction were captured by Laiken Jordahl, a borderlands campaigner with the Center for Biological Diversity, and posted to the organization’s Facebook page. Speaking to Border Report, Jordahl remarked that “this complete disregard for sacred sites, for indigenous sovereignty, is despicable.” He lamented the “irreversible damage” to the reserve.

John Mennell, a spokesman for Arizona Customs and Border Protection (CBP), remains adamant that the law enforcement agency, along with the National Park Service (NPS), have taken proper measures to ensure minimal harm to the environment and surrounding O’odham sites.

“NPS identified and provided CBP with locations for small wildlife passages within the new border barrier that would allow for the continued passage of small mammals,” Mennell wrote in an email to WhoWhatWhy in December. “Most recently, CBP and NPS coordinated on the treatment of archaeological sites identified by NPS in the vicinity of the planned projects in [the monument], and the agencies continue to discuss appropriate mitigation or treatment measures.”

A Border Wall as Architecture

Mennell’s claims about wildlife passages don’t tell the whole story. According to National Geographic, the passages are only 8½ inches wide by 11 inches tall, the dimensions of a piece of printer paper. And there are only 50 passages along the entire border — meaning in Texas, New Mexico, Arizona, and California — making them too widely spread to be effective.

And Tohono O’odham Nation Chairman Ned Norris Jr., has been quick to point out the Border Patrol’s lack of consultation with the Nation regarding preservation of the land’s history.

“The Tohono O’odham Nation is adamantly opposed to the fortified border wall and the permanent destruction it has caused,” Norris asserted. “Our sacred sites and burial grounds have been bulldozed and dynamited by federal contractors with reckless disregard for our religious and constitutional rights.”