Will the Electoral College Be Revamped Before 2024? - WhoWhatWhy
Reading Time: 6 minutes

At times, the presidential election can seem like a crapshoot.

For all its supposed orderliness, recent history shows that the current system of selecting the nation’s president seems to break down right at the end: In five presidential elections, the Electoral College has picked the candidate who came in second in the national popular vote.

The 2000 and 2016 presidential elections are the most recent examples of this. Yet some believe that focusing on those two elections understates the unreliability of the Electoral College.

Koza’s organization, a California-based nonprofit, is working to create what he considers a more stable system — one that advocates for the nationwide popular election of the president of the United States.

The group isn’t alone: The most recent Gallup poll showed 61 percent of Americans in favor of abolishing the Electoral College and determining the winner by the candidate with the most popular votes.

Not surprisingly for a shift this big, there is a split among reform advocates on the best way to do it.

In the past, backers of a national popular vote have supported a constitutional amendment to replace the Electoral College with a popular vote system.

“The single [biggest] number of constitutional amendments introduced in the US Congress in the past 230 years dealt with abolishing the Electoral College and supplanting it with some other electoral mechanism, most often the national popular vote,” Norman R. Williams, professor at law and director of the Center for Constitutional Government at Willamette University, told WhoWhatWhy.

In order to become law, any constitutional amendment must first be passed by two-thirds of the House of Representatives and the United States Senate and then ratified by three-quarters of the state legislatures — 38 out of 50.

The closest a constitutional amendment came to passage was in 1970, when more than two-thirds of the House of Representatives voted for it. However, the Senate came up five votes short of breaking the filibuster.

Most of the other attempts at passage never made it out of congressional committee. This difficulty in amending the Constitution has led some advocates of a national popular vote to try a different approach — one that avoids altogether rewriting the Constitution.

An End Run Around the Constitution

The National Popular Vote Interstate Compact (NPVIC) is an agreement in which member states award their electoral votes to the presidential candidate who receives the most popular votes nationwide. The NPVIC will go into effect if states representing at least 270 electoral votes (a majority of electoral votes) vote to adopt legislation joining the compact.

So far, the NPVIC has been enacted into law in 15 states and the District of Columbia, a group with a total of 196 electoral votes. It needs passage in states with an additional 74 electoral votes to go into effect.

“The US Constitution gives the states the exclusive power to decide how the states’ electoral votes are awarded,” said Koza.

And supporters are guardedly optimistic that they can secure the support of state legislatures representing the additional 74 electoral votes needed for the compact to go into effect in the near future.

Koza pointed out that advocates are focusing on passing NPVIC in nine states that have passed the legislation in at least one chamber — Virginia, Nevada, Michigan, North Carolina, Arkansas, Oklahoma, Minnesota, Arizona, and Maine. Collectively, these nine states have 96 electoral votes, more than the 74 needed to meet the threshold.

“The states that are most likely to pass it into law are the states where the bill has made progress in the state legislature in the past,” said Koza. 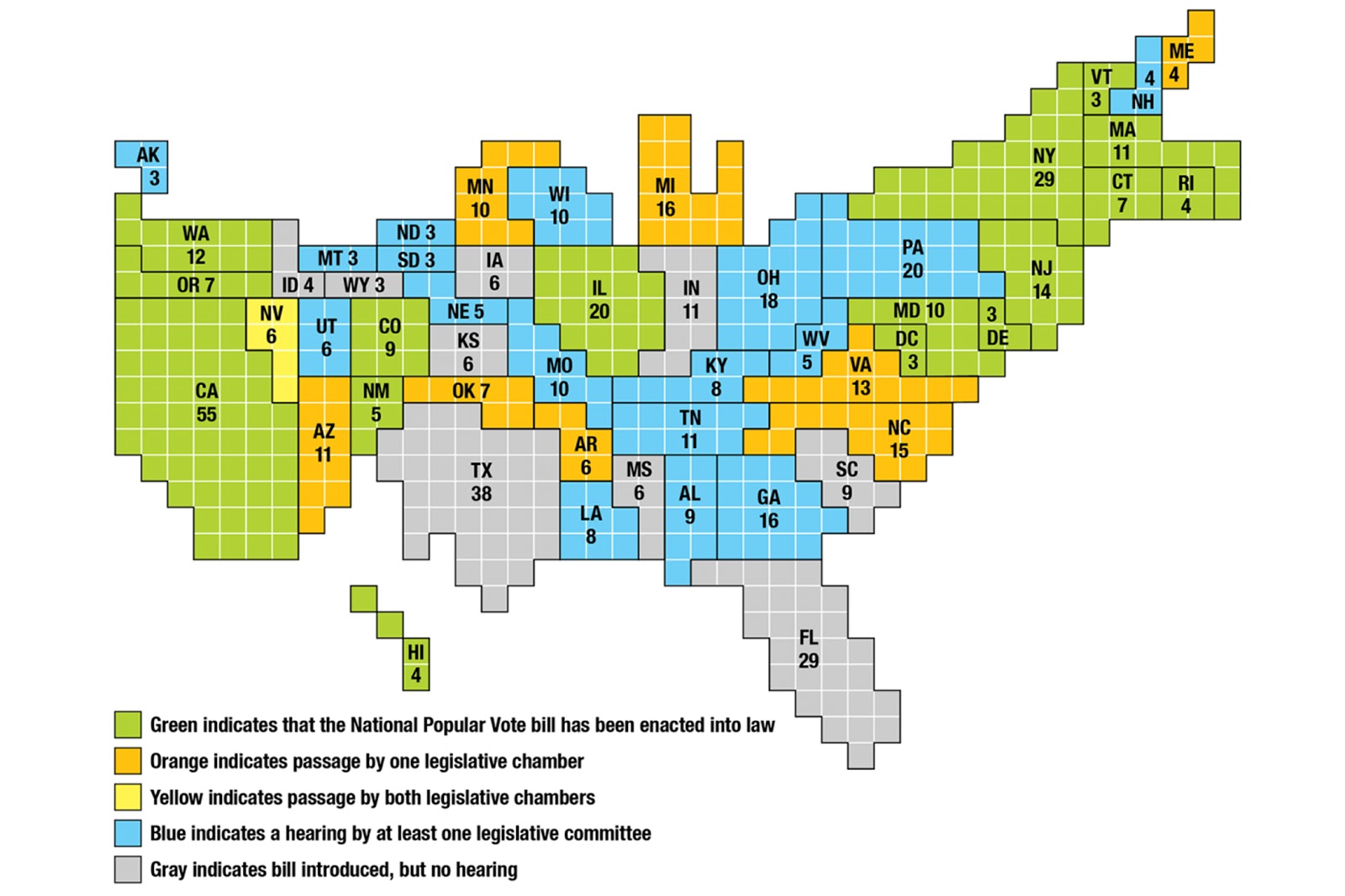 On the map above, each square represents one electoral vote (out of 538). Photo credit: Courtesy of National Popular Vote

Opponents of the NPVIC object to it on both highly technical legal grounds and broader ideological ones.

For example, if Republican Sen. Ted Cruz (TX) won the popular vote in 2024, blue California, which has consistently voted two-to-one for Democratic presidential candidates in recent elections, might balk at pledging their electors to him, compact or no compact.

Supporters assert that the NPVIC takes both of these issues into account.

They claim that the Constitution does not require congressional approval of interstate compacts unless they threaten federal supremacy. And they note the compact would be binding on states that freely entered into it.

But there are larger issues as well.

Some supporters of the constitutional amendment see the difficulty in its passage as an asset.

“The efforts to bypass the Electoral College, most notably the National Popular Vote Compact, and to achieve that reform without going through the kind of consensus building that an amendment requires, I think, only threatens to exacerbate the political divisions and political distrust we are currently witnessing,“ said Williams.

He also felt it was important for the country as a whole to be on board with the legitimacy of the process. “It is dangerous in a democracy for any party or large group of voters to think that the system is stacked against them,” said Williams.

NPVIC supporters say that a constitutional amendment is not the only way to achieve rule by popular vote and that their method is far more practical.

A 2020 Colorado ballot initiative sponsored by the state Republican Party would have repealed the state’s law joining the compact. It lost by only 4 points. Critics cite this as an example of how vulnerable the compact is to shifting public opinion.

What If Texas Turns Blue?

While the majority of Americans support a national popular vote, that support is sharply split along partisan lines, with Democrats strongly favoring it and Republicans strongly against it.

But things could change.

In this last election cycle, Biden picked off the two traditionally Republican Sunbelt states of Arizona and Georgia, in addition to narrowing the gap in North Carolina. And while Al Gore lost Texas by more than 21 points in 2000, Biden cut that margin to about 5.5 in 2020.

“Once [Texas] goes blue, that is the end of the Republican Party in its current conservative movement iteration. If you don’t believe me, I encourage you to play around with the Electoral College calculator and try to cobble together a plausible majority for the GOP without Texas,” said journalist Martin Longman.

Williams noted that in the 230 years of proposed Electoral College constitutional amendments, both parties have been on both sides of the issue repeatedly.

The Chicken and the Egg

Conversely, the NPVIC has a fair shot of hitting its 270-vote threshold before 2024. But it is also more vulnerable to court challenges and states getting cold feet when it comes to enforcement. Should the NPVIC go into effect in time for the 2024 vote, be upheld in courts, and survive shifting political winds, then a constitutional amendment would probably be deemed unnecessary.

But, if the NPVIC is struck down in the courts or states find a way of backing out of it, and the current trends for the Democrats in the Sunbelt continue, that may open the door to a constitutional amendment as the only viable option for choosing the winner through a popular vote majority.