Under normal circumstances, if you had a president who was not plotting to overthrow the results of an election he lost by 8 million votes, sending such a nomination for approval to the Senate Armed Services Committee might not draw much attention, even if one of the nominee’s siblings had twice pleaded guilty to federal felonies.

Under normal circumstances, at the end of a legislative session just five days before Christmas, Senate approval of such a promotion to the top ranks of the Army without any printed report or a recorded vote also might not be unusual. Under normal circumstances, it would be easy to accept the assertion that there was no connection between the president’s pardon and the president’s promotion — no quid pro quo, just the merits of each of the cases.

However, the Army’s conduct since the January 6 riot, including lying to the Washington Post for more than a week about what Lt. General Charles A. Flynn was doing that day, is troubling. The Army’s slow response to requests from Capitol and District of Columbia police is already being investigated by Congress, but the inquiry needs to be much deeper and broader.

Before the president and his supporters incited the January 6 insurrection, it appeared Michael Flynn was not gaining traction inside the White House, except as a supplicant for a pardon.

Flynn’s rants embracing the election fraud lie, so the public perception went, were intended to curry favor and pave the way for his full pardon. To many, he was simply a right-wing nut buttering up the boss as he frequently tweeted about conspiracy theories and dangerous ways to support Trump.

The president’s rationale appeared to be that the disgraced general was being pardoned for his refusal to implicate Trump and for his loyalty early in the 2016 presidential campaign.

The Army falsely denied for days that Lt. Gen. Charles A. Flynn, the brother of disgraced former national security adviser Michael Flynn, was involved in a key meeting during its heavily scrutinized response to the deadly assault on the U.S. Capitol.https://t.co/wreUXeQ79Y

The insurrection riot at the US Capitol on January 6 has changed all that and raises questions about what else the president, Michael Flynn, and some officials at the Pentagon might have been plotting. What postelection exchanges took place between the White House and the Pentagon? Did Donald Trump or Michael Flynn communicate in any way with Lt. Gen. Charles Flynn about using Army troops? What requests were made to Michael Flynn’s former deputy Ezra Cohen-Watnik, who was installed by Trump little more than a week after the November 3 election as the acting undersecretary of defense for intelligence?

Congress needs to complete a thorough examination of White House efforts to compromise and corrupt the Department of Defense, particularly the Army. Why did Michael Flynn repeatedly urge the president to declare martial law, use military force to confiscate voting machines, and enlist the Army to force several states that voted for Joe Biden to “reset” their election results?

In his campaign to overturn the election, was Trump actually listening to Michael Flynn about how to assert authority over the Army? Exactly what efforts did Trump and his associates make to enlist and suborn the armed forces? To whom did Trump talk and what requests did he and his seditious team make? Could the president have called Charles Flynn or asked his brother to make such a call?

Was it just the fallout from the January 6 riot or were there earlier requests from Trump to the Pentagon that prompted the head of the Joint Chiefs, Gen. Mark Milley, and the other seven top-ranking officers to feel obligated to issue a letter pledging to uphold the Constitution and the election of Biden as president?

So far, Pentagon officials have been opaque, when they are not outright lying, about what happened on January 6 as the riot unfolded. As the Washington Post first reported January 20, Pentagon officials flat-out lied for more than a week about who from the US Army was on that phone call for help from the Capitol and District of Columbia police. The backtrack came when the Army’s Deputy Chief of Staff for Operations, Planning and Training Lt. Gen. Charles A. Flynn — confirmed to the Post that he, in fact, was on the call.

Charles Flynn told the Post: “I entered the room after the call began and departed prior to the call ending as I believed a decision was imminent from the Secretary [Trump appointee Ryan McCarthy, then secretary of the Army] and I needed to be in my office to assist in executing the decision.”

On January 12, an Army official had sent the Post an all-caps email: “HE WAS NOT IN ANY OF THE MEETINGS!” That same day, the Army secretary praised Charles Flynn to the Post while “implying” he did not know whether Flynn had been on the January 6 teleconference. McCarthy said: “Charlie Flynn is an officer of an incredibly high integrity. Multiple combat tours. He has buried a lot of people. This guy has given a lot to this country. It is incredibly awkward for this officer every day for what is going on with him and his brother, but he puts his head down in, and he is locked in to serve the Constitution.” 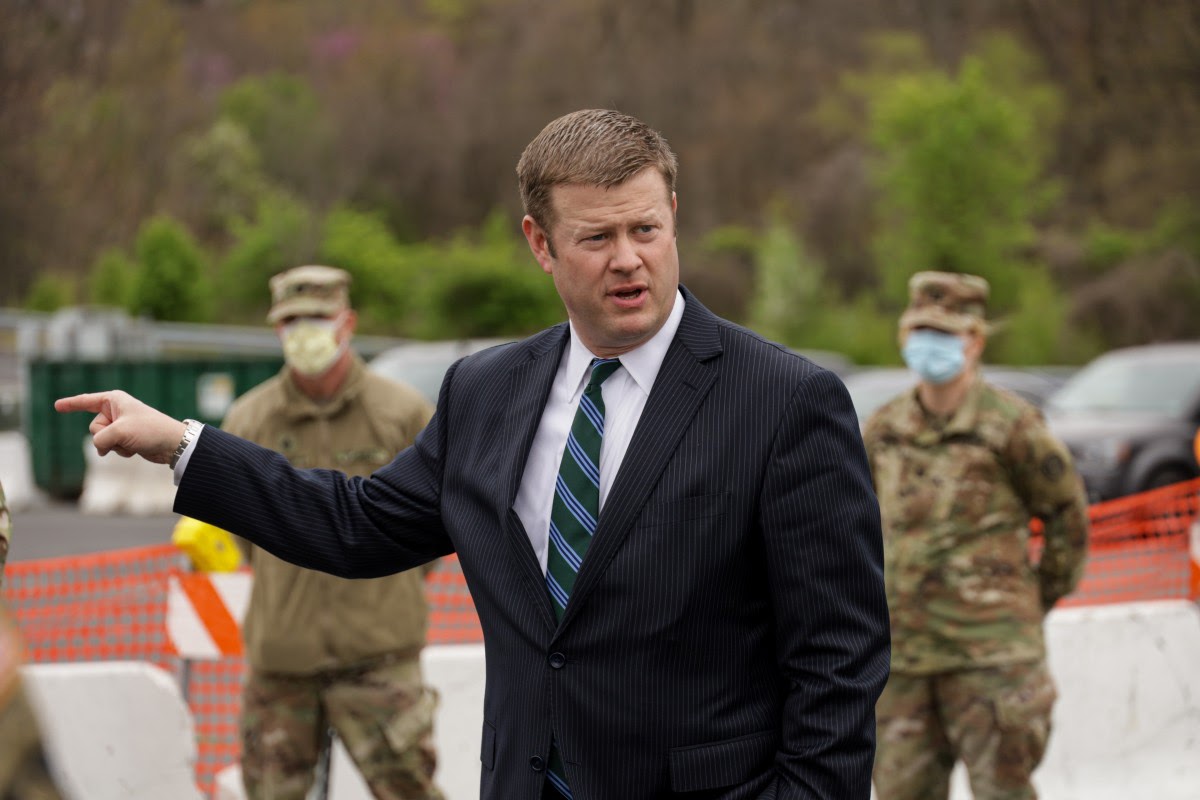 Perhaps a congressional committee can persuade former Secretary McCarthy to elaborate on what he meant when he referred to “what is going on with [Charles Flynn] and his brother.”

On January 21, the Pentagon hastily arranged for a conference call between Lt. Gen. Charles Flynn and reporters in which he said: “Suggesting that my brother’s relationship would somehow influence my actions — I categorically deny. And I take it as a bit of a questioning of my integrity. So those are my thoughts on that.” The Post noted that he also did not denounce his brother Michael’s radical views.

The newspaper said: “On the call Thursday, Flynn did not specifically distance himself from or renounce the extreme views of his well-known brother, but there is no indication that he shares those views.”

A day earlier, the Post was careful to say: “There is no indication that Charles Flynn shares his brother’s extreme views or discharged his duties at the Pentagon on Jan. 6 in any manner that was influenced by his brother.”

There also is no public record of how and when Michael Flynn and his brother communicate. At least before the elder Flynn got into trouble in 2016, there were plenty of stories about how close the two brothers were and how they shared military experiences, including at Fort Bragg, NC.

So, the question that is no longer a private matter between two siblings is: What did the brothers discuss? Had they stopped communicating once Michael Flynn was indicted? Did they resume talking after he was pardoned? Did Lt. General Charles Flynn tell his brother to knock off the crazy talk about using the military to force states to redo the election? Did Michael Flynn — forced out as director of the Defense Intelligence Agency under President Obama — ask his brother for help? Or did Mike Flynn ask President Trump to help his brother too?

Maybe it was just coincidence and sheer merit, but under the Trump administration, Charles Flynn’s career continued to accelerate. A year after Trump took office, Brig. Gen. Charles Flynn moved from the Pacific command in Hawaii to the Pentagon as a special assistant to the Army chief of staff. In June 2019, he picked up his third star when he was promoted again to lt. general and deputy chief of staff of the Army.

On November 30, 2020, just six days after pardoning Michael Flynn, the president sent to the Senate Armed Services Committee his promotion of Charles Flynn to general, a four-star rank. On December 15, Sen. James Inhofe, the Oklahoma Republican who chairs the Committee, moved the nomination to the Senate without a printed report, according to the Congressional Record.

On December 20, Charles Flynn’s nomination was approved by voice vote in the Senate. Charles Flynn’s promotion was pegged to him becoming the general in charge of the US Army Pacific Command. However, the post is not yet open. President Trump waited until December 2, 2020, to send the Armed Services Committee a nomination for the current Pacific commander, Gen. Paul LaCamera, to move to another command, and the Senate failed to act, thereby returning the nomination to the White House on January 3, 2021.

Even if Congress does not choose to question Lt. General Charles Flynn, the new secretary of defense — former four-star General Lloyd Austin — ought to keep a close eye on him.

Now that the New York Times has exposed Trump’s failed efforts to force the Justice Department leadership to overturn the election results in Georgia, we are beginning to get an idea of what former Press Secretary Kayleigh McEnany meant when she repeatedly said: “President Trump will work from early in the morning until late in the evening. He will make many calls and have many meetings.”

The timetable in the New York Times story about Trump’s efforts to oust the acting attorney general for refusing to succumb to election fraud is stunning enough, but it raises even more alarming questions about what else Trump was considering and who else he was pressuring, especially at the Pentagon.

One response to “Time for a Congressional Hearing With Lt. General Charles A. Flynn”