As the FBI warns of violent pro-Trump actions across the country following the attack on the US Capitol, heavily armed gun rights militants are gearing up for their annual Martin Luther King Jr. Day protest in Richmond, VA, former capital of the Confederacy.

The protest drew 20,000 last year, many clad in camo and combat gear and displaying hate group insignia. It was nonviolent, although three members of a neo-Nazi white supremacist group were arrested a few days before on murder conspiracy charges.

In light of the January 6 mob assault in Washington, this year’s protest could be downright scary. Thousands of pro-gun, pro-Trump people bearing semi-automatic rifles and pistols and flying all sorts of Dixie Rebel flags are expected to engulf Richmond by motorcycle, car, pickup truck, and bus from all corners of the country, ostensibly to support gun rights during a four-hour rolling show of force.

In a Facebook post focused on Wednesday’s convening of a new Virginia Legislature, Virginia law enforcement agencies including the Richmond Police Department and the Virginia State Police informed the public that a “Unified Command” has been established. The joint statement said in part:

Any violation of law, non-peaceful demonstration, or attempts to intimidate fellow Virginians will not be tolerated. Those who engage in such behavior will be held accountable.

Last week’s attack on the United States Capitol and recent credible threats of violence concerning capital cities in states nationwide underscore the importance of being prepared and vigilant to ensure public safety across the Virginia capital region. Through advance planning and multi-agency cooperation, the Unified Command is prepared and has the resources to protect those who live, work, and visit Richmond during the 2021 legislative session.

For nearly two decades now, a group called the Virginia Citizens Defense League (VCDL) has superimposed what it calls Lobby Day on Martin Luther King Jr. Day as part of its effort to pressure the state Legislature not to pass gun control legislation.

The group says it is not racist and only selected the federal holiday honoring the slain civil rights leader, who was a champion of nonviolence, as the time to parade around legally with guns because so many people have the day off work.

This year, limits on crowd assembly prompted by the COVID-19 pandemic altered the planning for the event months ago, says Philip Van Cleave, president of the VCDL. 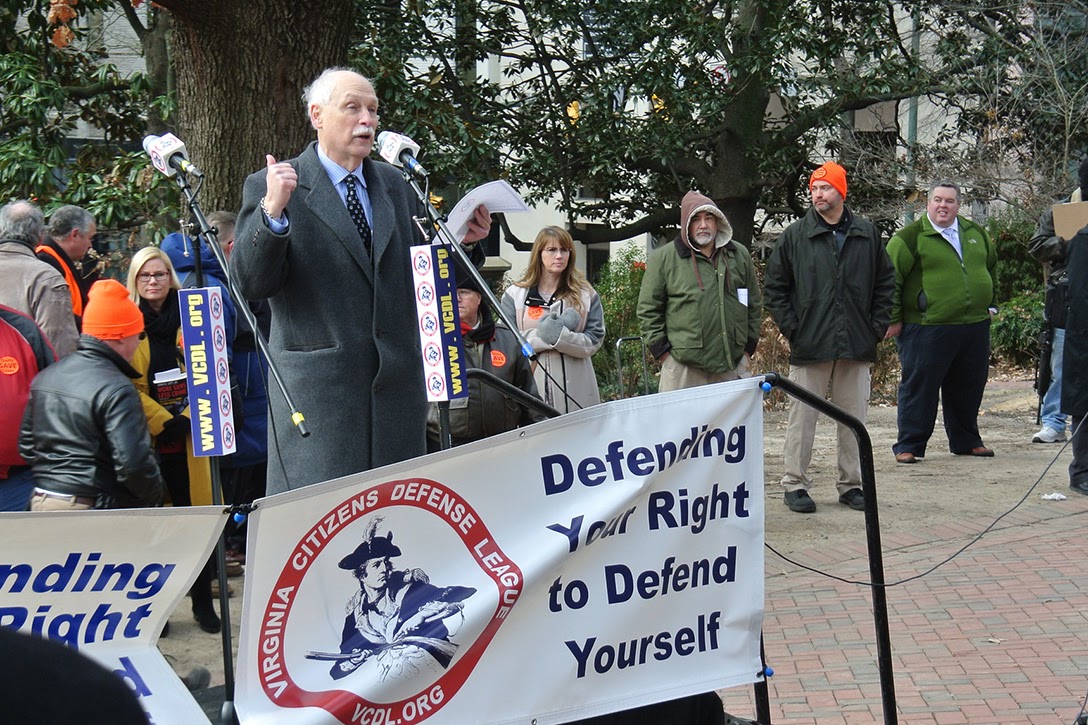 In an interview with WhoWhatWhy, Van Cleave acknowledged that he cannot control who shows up on Monday.

“We’ve told everybody, ‘Keep the theme on guns but there could be people that try to play off the media coverage itself to do something untoward.”

That’s the fear in the wake of the Capitol insurrection. As in Washington, all it takes is an assembly of thousands of armed Trump supporters to provide cover for groups intent on subversive attacks.

Lindsay Schubiner, program director at the Western States Center, which tracks extremist groups, told WhoWhatWhy: “Paramilitary and militia groups, in many ways, have significant overlap with other Second Amendment rights groups, but also more broadly, they frequently look for more mainstream conservative issues to champion in a way that allows them to broaden their base and recruit more people.”

Schubiner said, “It’s an issue that aligns very fundamentally with some of their core motivating ideology around concern about what they would call government overreach, but in fact, leads into deeply anti-democratic and sometimes anti-government organizing.”

Lori Haas, Virginia state director of the Coalition to Stop Gun Violence, said she was relieved there was no violence last year, thanks to the work of law enforcement agencies from across the state. But she’s not sure what to expect now: “From what we have seen in recent weeks, can we count on it again? I don’t know. I don’t think so.”

Haas accuses the National Rifle Association (NRA) of being the force behind the Richmond rallies. “The gun lobby today and its minions in states around the country continue to foment the notion that guys with guns make the rules. And that is not true in a democracy,” she told WhoWhatWhy. “Allowing the carrying of firearms in public by virtually anyone threatens our personal safety and the safety of democracy.” 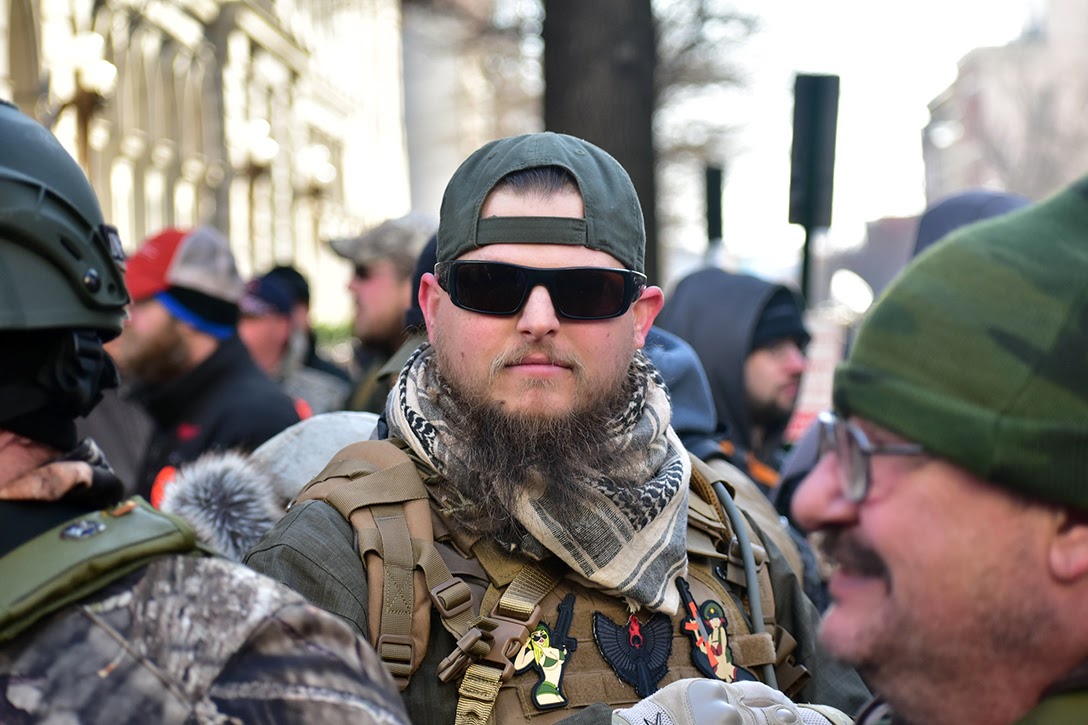 The crowd last year, more than double the size of the mob that triggered the riot in Washington, seemed to be deterred by a heavy police presence and an emergency order from the governor as they swarmed downtown Richmond near the Capitol Square.

The protest drew encouragement from Trump, who tweeted three days before the rally: “Your 2nd Amendment is under very serious attack in the Great Commonwealth of Virginia. That’s what happens when you vote for Democrats, they will take your guns away.”

Peppered throughout the crowd — wearing body armor and displaying hate group insignias — were many of the white extremists who had terrorized Charlottesville, VA, in 2017. The threat of confrontations prompted Virginia Gov. Ralph Northam (D) to declare an emergency, barring gun carrying at the state Capitol grounds and bringing in a heavy police presence.

Van Cleave dismissed charges that Lobby Day is an exercise in “intimidation.”

“They say that every year and it’s always such BS. It’s just looking for something to make us into boogeymen. ”Why do you need guns?’ This is the argument: ‘You’re just intimidating people. Why don’t you just not bring them?’” Van Cleave says.

His tortured reasoning invokes civil rights icon Rosa Parks: “Well, then we could say, ‘Why did a Black lady have to sit at the front of the bus?’ I guarantee you that when Black people started doing that, there were probably white people that felt intimidated.”

Virginia Democrats are backing off a ban on the new sale of assault weapons (at least for now) | 8News #Rolling4The2A #VCDL https://t.co/Dj6pFxhJz1

The massive show of force apparently did have some political impact last year. After the Democratic governor of Virginia and the new Democratic majority in the Legislature passed some restrictions on guns, the protest influenced state Democrats to block the most far-reaching gun control legislation, a ban on the sale of semi-automatic assault rifles.

Virginia Delegate Mark Levine (D-Alexandria), a leader in gun control legislation and a candidate for lieutenant governor, told WhoWhatWhy he hopes that the absence of legislators in Richmond Monday will calm the crowd. “If you want to threaten me, threaten to unelect me. Don’t threaten me with physical violence. … To the extent that you use guns to threaten public officials, that is not the proper use of guns … it is seditious, un-American and wrong.”

Authorities hope the right-wing proclivity to be incited by President Trump and to organize may have been reduced by his ban from Twitter and Facebook and the disabling of Parler, the right-wing social media site used by hate groups to recruit followers and coordinate attacks.

Still, Van Cleave brags about the tactical political advantage of holding a pro-gun march of such magnitude, touting “the sheer numbers, they’d never seen anything like that. It was probably the largest Second Amendment rally we’ve had in America. I don’t know of anything bigger than what we had. It was the size of Fredericksburg.”

“We’ve done at least 18 Lobby Days now and we’ve been around since ‘95. We have had lots of events over time and none of them have had any violence,” said Van Cleave.

“We’re doing a vehicle caravan this year. That solves the COVID issue because everybody is in their own vehicle and the Richmond ordinance about no guns during an event doesn’t apply to a bunch of cars driving through,” Van Cleave said.

Even a peaceful conglomeration of gun-toting demonstrators converging on a seat of elected government has taken on troubling implications since threats of violence across the country surfaced following last week’s riot. 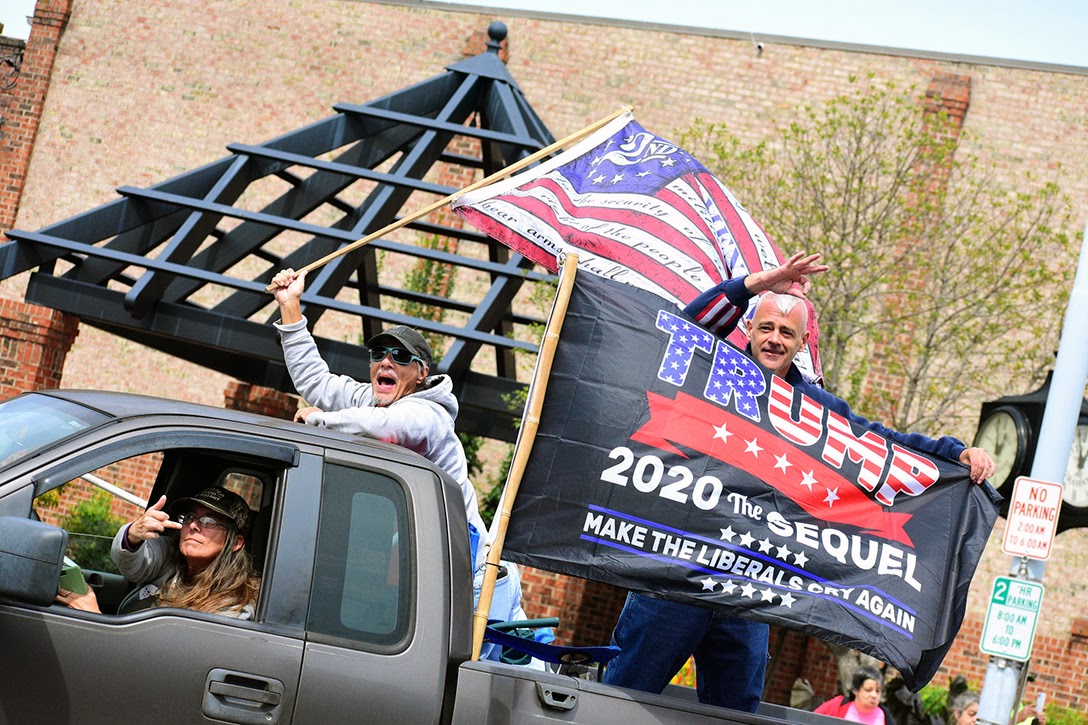 Gun control advocates are scheduled to hold peaceful demonstrations this year on the Richmond Capitol grounds and will undoubtedly encounter their gun-wielding opposition.

Levine has faith in the precautions now underway. “Every law enforcement agency in the country is waking up to the threat of domestic terrorism,” he said. “If Wednesday was not a wake-up call, then they are not going to be woken up.”

Indeed, just days before last year’s Richmond rally, the FBI arrested three members of “The Base,” a white supremacist group planning to “committ acts of violence against minorities.”

In Richmond, hate symbols, along with Confederate battle flags, were interspersed among the Trump and MAGA paraphernalia. In addition to MAGA Republicans, the event has attracted contingents from neo-Nazi, white supremacist, and anti-government militias. This configuration was similar to pro-fascist and hate groups that marched in Charlottesville.

During Black Lives Matter protests in Richmond in July 2020, several members of white supremacist groups were arrested for inciting a riot and destroying property.

Should violence erupt in Richmond this year, the situation could be more difficult to control than the attack in Washington, since the Richmond crowd will be fully armed and driving. Here are the marching orders as detailed on the VCDL site.

You may have heard of the annual “Rolling Thunder” event in DC and the massive “Trump Trains” recently.  Both involve hundreds of vehicles with flags and signs traveling together to express support for a cause.

VCDL is going to do that on January 18, but on steroids!

VCDL’s lobbying effort on January 18 is going to consist of thousands of vehicles in four major caravans coming from the corners of the state and all of them headed to Richmond! We will post the times the various caravans should be passing key locations so those along the routes can join the caravans as it passes by their area.

The four major caravans will all flood into the Richmond area over a 4-hour period in the afternoon and will pass through the center of Richmond, near wherever the Senate is meeting.

For participants, the VCDL answers this question:

What if I want to park my vehicle and walk around Richmond armed?

While VCDL is not holding an event in Richmond, you are certainly allowed to park your car and walk around the City armed if you wish.  Carry signs if you wish, too.  The Richmond ordinance banning guns at a permitted event only applies if:

Lobby Day organizers will be instructing their social media followers to use the hashtags  #Rolling4the2a and #VCDL. But if the groups the FBI is concerned about decide to use the gathering as a cover for more dangerous activities, the agitators communication will probably be harder to track.

The crowds that assemble in Richmond and all the armed demonstrators at state capitals around the country may remain peaceful. But if recent FBI reports about extremists play out and they try to emulate the mob that attacked the US Capitol, next week will turn out to be a defining one for democracy in America.