As some in the crowd chanted prayers for Donald Trump’s triumph over evil, a dozen men circled the area carrying semi-automatic weapons in front of the Maricopa County Elections Department in downtown Phoenix.

More than 100 pro-Trump protesters gathered on a warm, cloudy afternoon three days after the election, expressing disbelief that Arizona had flipped for Joe Biden.

Some were heavily armed, others waved signs that declared “KEEP ARIZONA RED” and made baseless claims of election fraud, and a few declared the innocence of Kyle Rittenhouse, accused of killing two Black Lives Matter protesters in Kenosha, WI, in August.

Maricopa, the state’s largest county, voted for Donald Trump in 2016. This year, it helped tip Arizona to Biden, who currently leads in the county by a margin of 46,775 votes.

Statewide, Biden leads by just under 17,000 votes, with approximately 77,000 ballots left to be counted throughout Arizona, according to Secretary of State Katie Hobbs. More than 38,000 of the uncounted votes are in Maricopa County, where poll workers continue their tabulation. The recorder’s office is providing a 24/7 livestream of the ballot-counting process in a display of transparency. 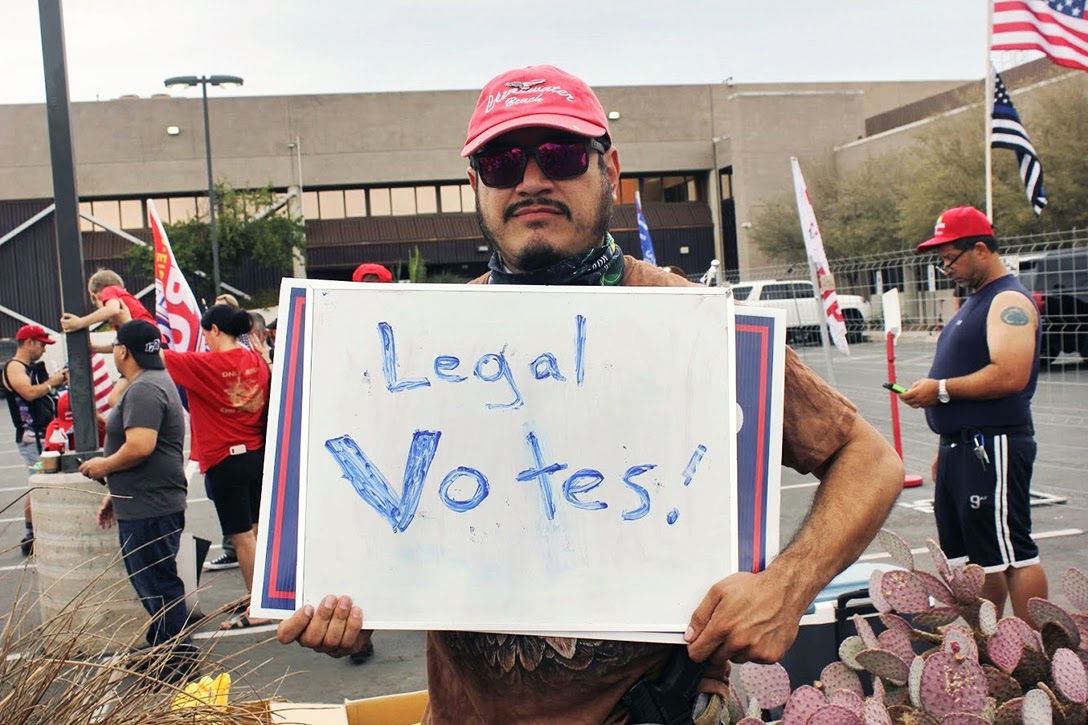 A man who declined to give his name to a WhoWhatWhy reporter arrived at the protest with a group clad in tactical gear and wielding AR-15s “as a show of force.” Though he voted by mail himself, he expressed concern over the legitimacy of absentee ballots and espoused repeatedly debunked claims that voters were provided with Sharpie markers that rendered ballots unreadable.

Arizonans have been voting by mail for more than two decades. When asked the difference between mail-in ballots in this election and those in past elections, the man admitted he didn’t have an answer.

Despite a sizable law enforcement presence, the rally remained largely peaceful, with no sign of counter protesters.

Liz Haskell, co-facilitator of Yuma County’s Indivisible, a progressive group dedicated to fighting the Trump agenda, said that there were no immediate plans to hold opposing rallies and expressed faith in Arizona’s voting system. 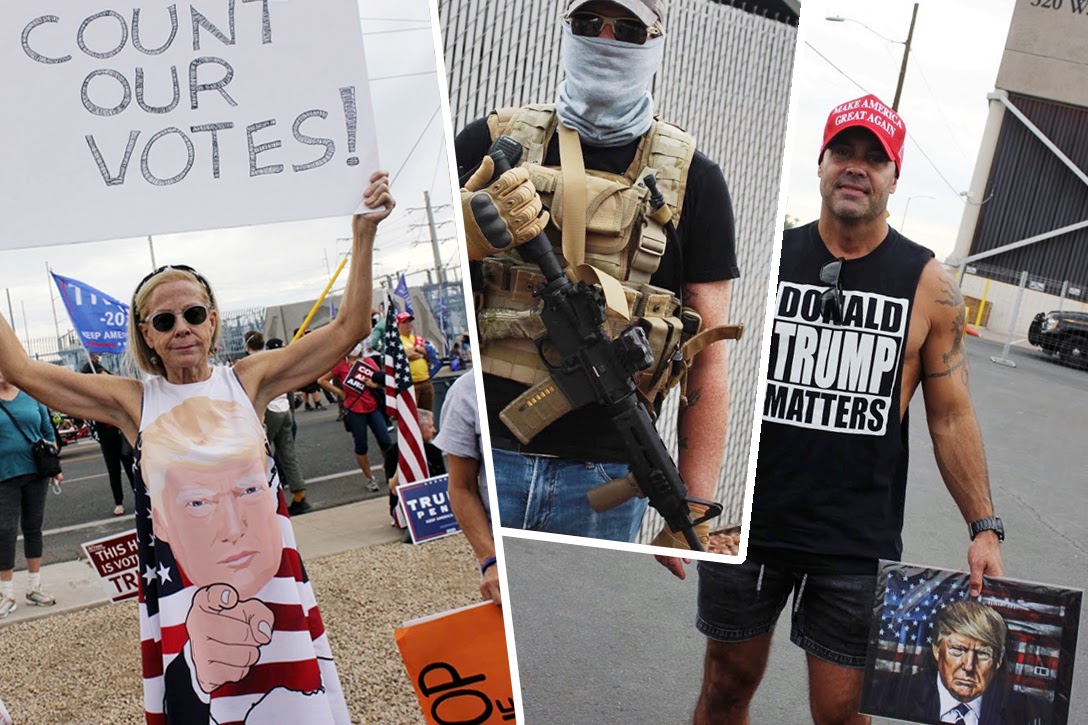 (From left) A woman in a Donald Trump dress protests for the counting of all legal votes in Maricopa County; A man carries an AR-15 to protect the crowd against potential “antagonizers”; A man holds a portrait of the president. (Phoenix, Friday, Nov. 6, 2020). Photo credit: Marisa Latzman / WhoWhatWhy

“What we see is that the system is working, the votes are being counted,” she said. “All the county recorders are working very carefully. They have observers from both parties making sure that everything goes right.”

Trump’s latest false statements questioning the validity of the election results prompted Yuma County Indivisible to join forces with Stand Up America, a nonprofit group focused on increasing voter turnout, to form Protect the Results. Its members aim to honor valid election results and take peacefully to the streets should Trump refuse to concede.

The Phoenix rally comes at a time when Arizona and the rest of the country are seeing what some experts deem a third wave of coronavirus infections, with 2,600 new cases and 38 deaths reported in the state as of Saturday. But most of the attendees did not wear face coverings, and a few aggressively expressed distrust for those who did.

“I just lost my mother yesterday to Covid, and here I am with no mask,” one man said, chuckling.