They don’t call them battleground states for nothing. With Joe Biden pulling ahead, the Trump campaign is fighting in court to stop vote counting in Michigan and is demanding a recount in Wisconsin.

In Michigan, where Biden has a lead of about 61,000 votes, tens of thousands of absentee ballots still need to be counted, notably in larger, heavily Democratic cities including Detroit, Flint, Grand Rapids, and Kalamazoo.

Secretary of State Jocelyn Benson said Wednesday morning she is hopeful that unofficial results will be available within the next 24 hours, and even as early as Wednesday night. Official results could take much longer, however. Once the initial tabulation is completed, election officials, both Republicans and Democrats, will review the counts of the entire election before releasing official results, Benson said.

But the Trump campaign challenged that timetable, allegedly filing suit in the Michigan Court of Claims seeking to halt counting. The campaign argued it has not been given “meaningful access” to observe the opening of ballots and the counting process. The lawsuit also seeks the right to review ballots that have already been opened and counted.

Attorney General Dana Nessel’s office has yet to see the suit, but Press Secretary Ryan Jarvi issued the following response: “Michigan’s elections have been conducted transparently, with access provided for both political parties and the public, and using a robust system of checks and balances to ensure that all ballots are counted fairly and accurately.”

Speaking before the suit was filed, Benson blamed counting delays largely on the Legislature’s refusal to modify election laws to allow absentee ballots to be processed — not counted — in the days before the election. In September, the Republican-controlled Legislature passed a law, which was signed by Gov. Gretchen Whitmer (D), allowing clerks in counties with populations of at least 25,000 to process absentee ballots on November 2, but only for 10 hours.

“We’re going to ensure that the results of our elections accurately reflect every single ballot vote that was cast. And this is particularly important in close races, as the number of outstanding ballots is still greater than the margin of difference between many races with leading candidates,” Benson said Wednesday. 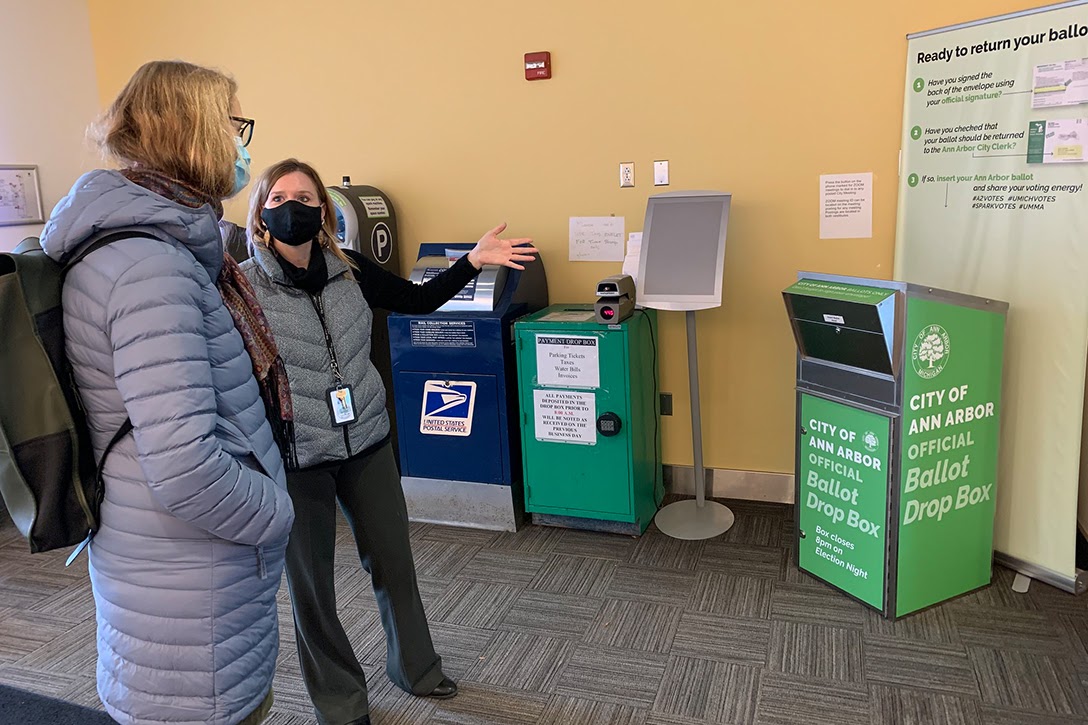 The lawsuit came as President Trump tweeted his surprise that his Democratic rival was beating him, and raised false flags about surprise ballots.

“Last night I was leading, often solidly, in many key States, in almost all instances Democrat run & controlled,” Trump tweeted. “Then, one by one, they started to magically disappear as surprise ballot dumps were counted.”

Meanwhile, the race for the US Senate remains close, as Democratic incumbent Sen. Gary Peters caught up to Republican John James, who had the lead throughout the night. Both candidates were at 49.1 percent at midday.

Despite concerns of armed voter intimidation and potential violence at the polls, Michiganders were able to cast their ballots on Election Day without major issues.

Authorities did, however, receive numerous reports of robocalls spreading misinformation about the election. Some of these calls were trying to convince Flint voters to vote on Wednesday to avoid long lines at the polls, according to Attorney General Dana Nessel. But both Nessel and Benson tweeted that the information was false and clarified that voters needed to be in line by 8 p.m. on Tuesday to cast their vote in person. Other calls falsely claimed that law enforcement would arrest voters with outstanding warrants.

Wisconsin law allows candidates to ask for a recount if the margin of victory is less than 1 percent. And the Trump campaign quickly announced that it would seek a recount, claiming election “irregularities in several counties” without providing specifics.

Wisconsin Republicans added the 1 percent limit to the recount law after the 2016 presidential election when Green Party nominee Jill Stein, who received just 31,000 votes in the state, successfully petitioned for a recount.

AP has projected Biden as the winner, and the Democrat’s campaign has said it is confident he will still win the state even if there is a recount.

Wisconsin’s former governor, Republican Scott Walker, seemed to share that point of view. Walker, who was in office in 2016, tweeted that Biden’s lead is a “high hurdle” if the gap in the final count remains at around 20,000 votes. Walker noted that there have been recounts in the state only twice in the past decade, and they did little to change the outcome. In Wisconsin’s 2011 state Supreme Court race, just 300 votes changed, while a 2016 presidential election recount swung 131 votes to President Trump, he noted.

In a morning briefing, Wisconsin Elections Commission (WEC) Administrator Meagan Wolfe, the state’s chief election official, stressed that Wisconsin elections are a “deliberate, meticulous process” designed so there is “no opportunity to add votes to the tally.” Wisconsin’s three-step canvass process begins this week and concludes on December 1, when official vote tallies are released. Until then, unofficial vote tallies are typically compiled by the media or other interested parties.

High levels of voter turnout were seen throughout the state. The unofficial 2020 tally of 3,239,920 votes cast statewide compares to 2,976,150 votes in the official WEC results for the 2016 presidential race. Unofficial results in Milwaukee County show 83.7 percent turnout, almost a four-point increase from 2016. A party breakdown is not yet available.

In Dane County, Wisconsin’s second-largest county, 80 percent of the voting-age population cast a ballot, or 345,604 total votes. That compares to 311,000 votes cast in 2016. The city of Madison reported 75 percent turnout with 161,836 votes cast in its unofficial results.

Wisconsin Republicans have actively pursued lawsuits about election procedures, including lawsuits that set an Election Day deadline for the arrival of absentee ballots.