A small army of volunteer “vote protectors” is reporting voter intimidation in North Carolina, mostly by Trump supporters, amid a tsunami of early voting in the state’s largest cities.

The vast majority of cases have involved “overzealous electioneering, primarily when the lines are long, outside of the buffer zone, with some reports of aggressive campaigning within the buffer zone,” said Joselle Torres of the voting-rights group Democracy North Carolina. “All intimidation reports that have been escalated have been reported to the North Carolina State Board of Elections.”

Examples of overzealous and aggressive electioneering have included reports that people were physically touching voters, continuing to approach voters who told them to stay away, and going past the 50-foot election boundaries to campaign, Torres said. Most of the reports have been about Republican electioneering, but there have been a small number involving Democrats, too, she said.

There also have been reports of pro-Republican voters in the Raleigh area making racist remarks to Democratic campaign workers, as well as Trump supporters using their phones to record video of anyone they think might be voting illegally. And in one instance, law enforcement in Union County, which is south of Charlotte, threatened to ticket voters who parked in an overflow lot on the first day of early voting instead of showing them where they could park legally. Torres said advocates intervened, the county Board of Elections was contacted, and another lot was set up. In general, the group has found county and state elections officials to be helpful in handling problems.

In addition to the reports made by their volunteers, the hotline for the Raleigh-based nonprofit received more than 4,000 calls during just the first week of in-person early voting, which began October 15 and runs through Halloween. Compare that to four years ago when the group received a total of 3,831 during the entire election, with all but 1,000 coming on Election Day itself. Most of this month’s calls concerned long lines, lack of accessibility for the elderly and handicapped, confusion about voter registration status and polling locations, plus questions about locating absentee ballots in the mail stream.

As in many states, North Carolina is breaking records for early voting. More than 4 million North Carolina voters — a whopping 55.6 percent of those registered — have already cast their ballots, either at early voting sites or by mail. That’s nearly 1.5 million more than at this point four years ago and only 685,672 votes shy of all who voted in the state in 2016, including on Election Day.

In line with those numbers, Democracy North Carolina recruited more than 2,200 volunteers across the state to monitor the polls this year, twice the number it deployed in 2016. The volunteers must be at least 16 years old and attend a two-hour virtual training session; then they’re given a yellow T-shirt to wear emblazoned with “Vote Protector Volunteer” on the front, along with Democracy North Carolina’s 888-OUR-VOTE hotline number. 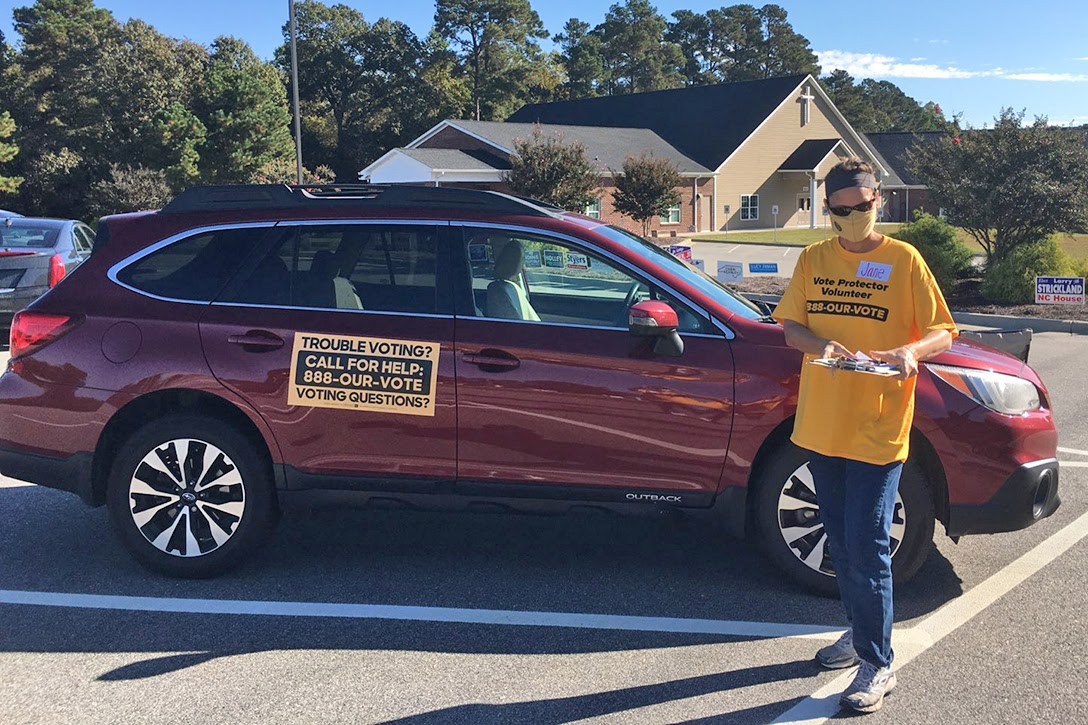 Once given their assignment, volunteers are asked to promote the voter hotline by planting informational yard signs at their polling places, completing an evaluation checklist for the precinct they’re working, and alerting volunteer attorneys and law students trained in state election law at the hotline phone bank if they spot any major issues. Volunteers may also station themselves outside of a polling place and interact with voters who need assistance.

The group says most calls to their hotline are coming from Mecklenburg, Wake, Guilford, Durham, and Cumberland counties, which encompass the state’s largest cities: Charlotte, Raleigh, Greensboro, Durham, and Fayetteville.

“We’re offering ‘help desks’ and ‘safe sites’ in counties where voter intimidation is expected or has historically existed,” Torres said. “Teams of volunteers will provide everything from information to entertainment to de-escalation tactics for voters concerned about intimidation and looking for a safe space to vote in their area.”

Raleigh’s Aylett Colston, who spent 17 years practicing corporate law before changing her focus to voting rights four years ago, is one of more than 350 attorneys and law students who have helped staff the voter hotline since the first day of early voting. She was inspired to become more involved after serving on a committee of lawyers that helped several voting-rights nonprofits in 2016 when North Carolina’s incumbent Republican governor, Pat McCrory, refused to concede to the declared winner, Democrat Roy Cooper.

“It was a real education going to those state Board of Election meetings,” Colston recalled. “I had never seen adults behave like that, it was fairly stunning. So I started tracking election laws in North Carolina and was amazed at how I kept seeing [state and county election officials] get things wrong.”

She immediately noticed upon doing her voter hotline work in 2016 that many North Carolinians reported that they had registered with the state Department of Motor Vehicles through the Motor Voter Law but the DMV never sent their information to election officials.

Colston is now working four shifts during early voting and on Election Day. She said this year many voters worried about COVID-19 are either confused about or not aware of a rule that was changed for this election that allows for curbside voting in the state.

Colston also is concerned about an issue that may arise on Election Day if it’s raining or very humid. She said her experience tells her that the state’s optical scanners, which record the ballots cast, have a history of “gumming up and experiencing problems, which make voters very nervous.”

Victoria Shea, a retired clinical psychologist in Pittsboro, NC, has been volunteering as a “vote protector” since 2014 and worked at five different sites in her home of Chatham County on the first day of early voting this year. She is set to do two more shifts — October 31 and Election Day.

“That’s going to be a long one,” Shea said of November 3. “I’m going to have to have my snacks ready to go.”

Shea, who has been all over the central and eastern parts of the state volunteering her services at the polls over the past seven years, said this year’s first day of early voting “was unlike anything I’d ever remembered. Although there were 16 days left of early voting, the lines were so long. You could tell there was a lot of pride for people who were so eager to vote. They really wanted to be there on the first day.”

In previous years, Shea and other vote protectors only spoke to voters as they were coming out of the polls. This time they’re making themselves available as people walk into the precinct, letting voters know that they’re there to help if they experience any problems trying to cast their ballot during one of the most turbulent elections in American history.

“People seem to really appreciate that,” Shea said. “I think perhaps the most important purpose we’ve served [in 2020] is reassuring people just by our presence.”

One response to “As Early Voting Soars, So Does Voter Intimidation”