Will 2020 Be the Breakout Year for Ranked-Choice Voting? - WhoWhatWhy
Reading Time: 7 minutes

In this year’s hotly contested Massachusetts Democratic congressional primary, the winner drew just over 22 percent of the vote. He was considered the most conservative candidate in the field, with more “progressive” candidates splitting up most of the other votes.

In 2016, votes cast in Michigan and Wisconsin for Green Party presidential candidate Jill Stein exceeded the winning margin for Donald Trump in those states. In theory, if Stein had not been on the ballot and all her votes had been cast instead for Hillary Clinton, she would have won both states — and the presidency.

What do these two seemingly unrelated events have in common? For many they constitute Exhibit A for what is wrong with the current political system, and an argument in favor of a sweeping reform: ranked-choice voting (RCV).

Under the present system in most states, voters can choose only one candidate in a primary or general election. With RCV, voters can “rank” their voting choices in order of preference: first choice, second choice, third choice, and so on, based on the number of candidates.

When all the first-place votes are tallied, if any candidate wins more than half the total vote, that candidate is declared the winner.

If no candidate receives at least 50 percent of the first-place votes, then votes for the lowest polling candidate are reassigned to the second-choice candidate of those voters.

In the 2018 race in Maine’s 2nd Congressional District, after the initial count was done, the Democrat narrowly trailed his Republican opponent. However, after votes of the two “third-party” candidates were reassigned under the state’s RCV system, Democrat Jared Golden gained enough second-choice votes to pull ahead — and win.

Over the last several years, RCV has been adopted in more and more towns and cities. Maine became the first state to adopt RCV for federal office in 2016, followed by New York City in 2019 for primaries for city offices, starting in 2021.

If Massachusetts and Alaska voters approve ballot initiatives November 3 to establish RCV, the concept could really take off. Both initiatives, if passed, would apply to federal and state offices starting in 2022.

RCV advocates point out a huge advantage for their reform: eliminating third-party candidates as “spoilers.” If RCV had existed in 2016 in Michigan and Wisconsin for the presidential general election, supporters of Jill Stein could have ranked her as their top choice, with Clinton as their number two choice. They wouldn’t need to worry that voting for Stein would split the moderate-to-very-liberal vote and throw the election to Trump.

In multi-candidate primaries, a candidate with views not representing most of that party’s voters could not squeak by with a bare plurality. Because votes for the lowest-polling candidates would be redistributed to the second, third, or fourth choices of voters, the eventual nominee would, in theory, better represent the views of most voters.

“The bottom line is that Ranked Choice Voting helps break the establishment’s grip on power,” said Ellen Moorhouse, deputy communications director for the political reform group RepresentUs, in a message to WhoWhatWhy.

One of the chief counterarguments is that RCV is too confusing for voters to understand  — especially for those whose second language is English. 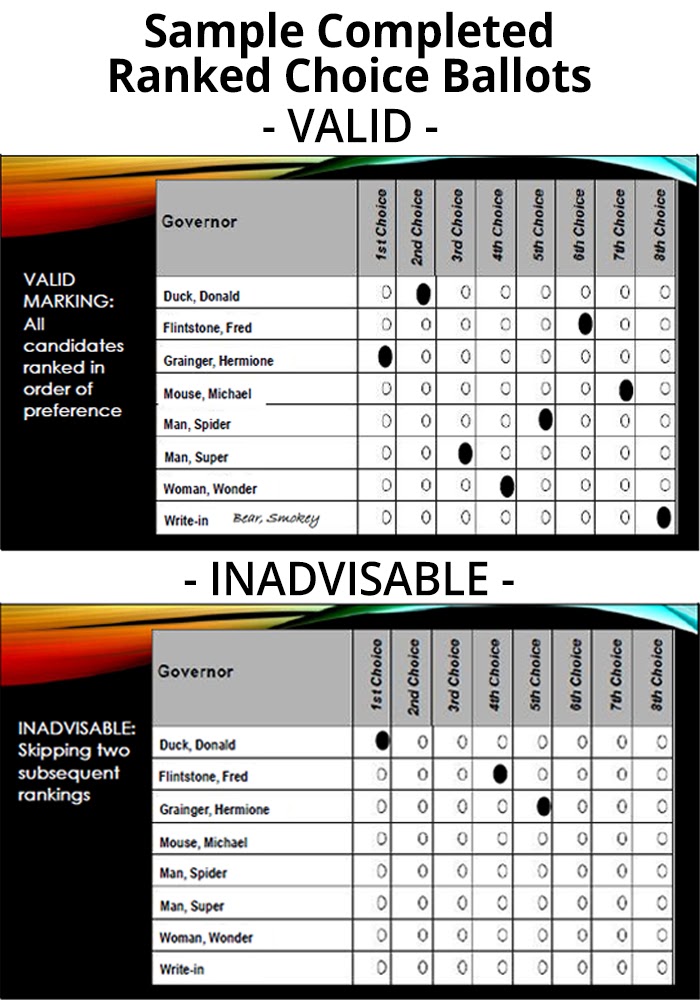 “In Maine, voter confusion was so pervasive that proponents of ranked-choice voting felt the need to publish a 19-page instruction manual to help voters navigate the process,” according to one case study.

A related argument is that under the present system, voters already have difficulty keeping informed about a candidate’s position on the issues. Asking them to rank all the candidates in an election would be complicated, burdensome, and unrealistic.

Advocates disagree. ”We are seeing strong rates of usage of the ballot rankings … folks that make the argument that it is too confusing are really underestimating their friends and neighbors … evidence shows voters embracing it,” said Deb Otis, a senior research analyst with FairVote, a nonpartisan group championing electoral reform.

Other problems cited by critics include “spoiled ballots” and “exhausted ballots.” Ballots are “spoiled” when voters incorrectly fill out the complicated RCV ballot, which could result in all their votes being rejected.

Ballots are “exhausted” when a voter ranks only a few candidates and leaves the rest blank. If an unranked candidate didn’t make it past the initial rounds, that means the voter, in effect, has lost her say in the final outcome.

Critics cite a 10 percent “spoilage” rate of ballots in Minneapolis and cities under RCV. They say that in 96 elections held under RCV, there was an exhausted ballot rate of almost 11 percent.

Supporters acknowledge there may be some confusion among voters when first using RCV. But once voters become accustomed to the system and use it in multiple elections, it retains a high level of public support. Supporters cite their own studies which vigorously dispute the claims that RCV leads to more voter errors and exhausted ballots.

“Growing numbers of cities, including those in firmly Republican states, appear more likely to embrace the RCV system.”

Opponents of RCV also note that several cities that tried the system — including Burlington, VT, Ann Arbor, MI, and Aspen, CO — later discarded it, mainly due to voter dissatisfaction.

But supporters note that growing numbers of cities, including those in firmly Republican states, appear more likely to embrace the system. In 2020, 67 bills were introduced in 22 states for ranked-choice voting. Three years ago, there were just 31 bills in 17 states.

The Acid Test in Maine?

Otis believes the Senate race in Maine on November 3 — between incumbent Republican Susan Collins, Democratic challenger Sara Gideon, Green Party candidate Lisa Savage, and independent conservative Max Linn — could demonstrate whether RCV can eliminate the spoiler role of third parties. Assuming that Collins and Gideon win the most votes initially, but not a majority, reassigned votes for the other two candidates would determine the eventual winner.

In Maine, 2020 is the second election cycle using RCV, which is already changing the way candidates run their campaigns.

Green Party nominee Savage has urged her supporters to rank Democrat Gideon second, or “Vote Blue as Number Two.” If she can’t win a majority, she wants Gideon to be elected.

RCV would also allow Linn’s more conservative supporters to rank him as their number one choice, with Republican Collins as their most likely second pick.

RCV also seems likely to increase, not decrease, first-round vote totals of the two third-party candidates. Voters wouldn’t have to worry about choosing a “spoiler,” since their votes would be reallocated to their second choice in the next round. 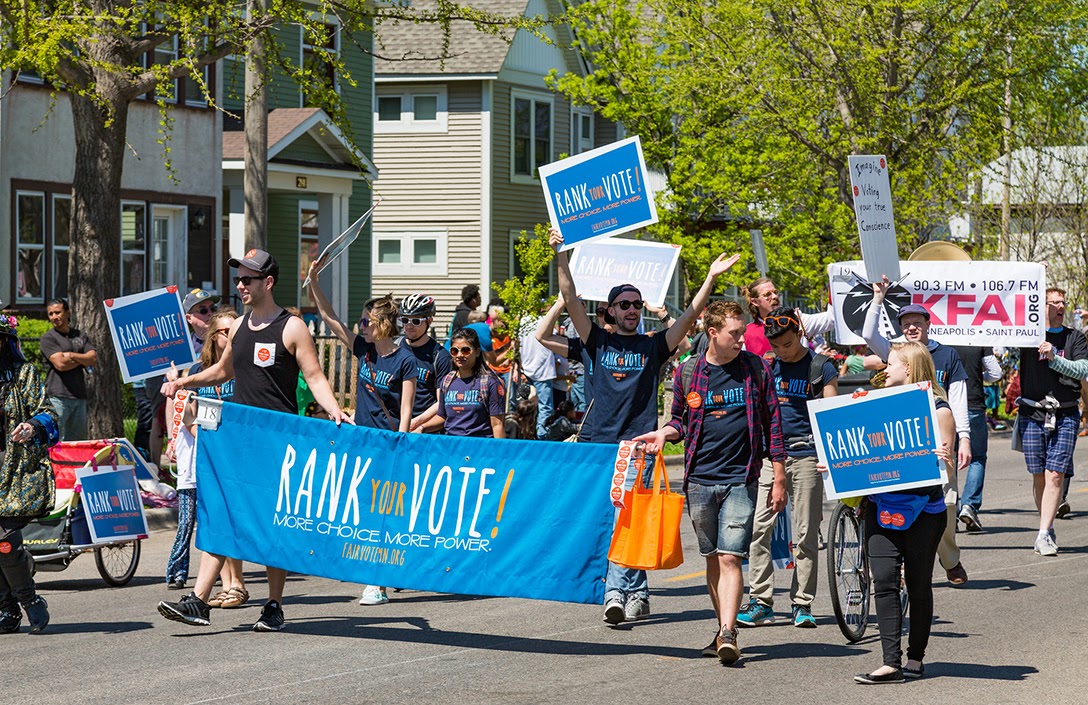 “It could be that the biggest complicating factor for the longtime [Collins’s] reelection bid is not her relationship to President Trump, or her famous stand for Brett Kavanaugh’s confirmation to the Supreme Court, but the way the state has decided to elect its leaders,” concluded a report in one national journal.

On November 3, voters in Alaska and Massachusetts will decide whether to adopt RCV, along with several medium-sized cities in California, Minnesota, and Colorado.

A recent poll found 48 percent of voters in Massachusetts support RCV, while 43 percent oppose. Polling is traditionally unreliable in Alaska, but in the GOP-leaning state, RCV is being opposed by the state Republican party and conservative groups like Americans for Tax Reform and the Club for Growth. But campaign finance reports show that RCV supporters in both Massachusetts and Alaska have raised much more money than their opponents..

If both states pass RCV, what will be the national impact?

“We will see momentum around the country to expand this method of voting. Grassroots campaigns will continue to push the issue and get it on ballots. This is a bottom-up reform of government to fix our broken elections,” said Moorhouse.

Added Otis, “The big priority for FairVote right now is expanding the use of ranked-choice voting in the presidential primaries … on the Republican side, next cycle they won’t have an incumbent President running, so I think we could expect another one of these large primary fields.”

RCV may be a topic of national interest, but it is individual states, not Congress, that have the power to establish most rules for presidential elections — primary or general.

Presidential primaries in 2016 and 2020 illustrate how RCV could have changed outcomes. In 2016, President Trump won less than half the votes cast in GOP presidential primaries (about 45 percent of the total vote) against a big field of candidates. But his pluralities won enough primaries to gain the nomination.

In the first three Democratic primaries of 2020, the most progressive candidate, Bernie Sanders, placed first in the popular vote in Iowa, New Hampshire, and Nevada. However, he drew well under a majority of total votes cast, due to the large field of mostly moderate Democrats.

Rather than try to build a broad coalition, the Sanders camp pursued a “small tent” strategy, believing that if he could attract 30 percent of the votes in early and middle primary and caucus states, he would have a clear path to the nomination. In theory, the large number of moderate candidates would divvy up the remaining votes in comparatively smaller slices.

If so many moderates hadn’t dropped out before Super Tuesday and shifted supporters to Joe Biden with their endorsements, Sanders might have pulled it off and become the Democratic nominee. RCV supporters assert that under their system, all of those problems and possibilities would become moot, because by ranking their ballots, voters could ensure the candidate with the broadest support would always emerge the winner.

Is Ranked Choice Voting too confusing or can voters quickly get the hang of it? Is it a necessary reform or an overly complicated fix for a “problem” that doesn’t need fixing? The results from November 3, including the ballot measures to adopt RCV, may help determine how the fundamental democratic process of choosing our leaders plays out in the future.

One response to “Will 2020 Be the Breakout Year for Ranked-Choice Voting?”