If you were putting together a time capsule to bury and wanted to include a prime example of what a gerrymandered state map looks like in 2020, you’d look no further than North Carolina and the nonsensical drawing of its 13 congressional districts.

Some of them look more like the outline of a fire-breathing dragon than a sectional compilation of the mountain, Piedmont, and coastal regions of the Tar Heel State. And it was much worse before a court-ordered mandate forced the Republican-controlled state legislature to redraw five of the districts last year.

It’s been this way since 2010, when the Republicans took control of both the General Assembly’s House and Senate for the first time since 1896. The GOP made the long wait worthwhile from a partisan standpoint, structuring the lines in such a cockeyed way that a state with 500,000 more registered Democrats than Republicans now provides the GOP with a 10-3 edge in congressional seats.

“Certainly the Democrats did this when they were in power — there are many good examples in North Carolina of gerrymandering throughout the last century — but the precision with which the Republicans did it [in 2010] was unprecedented,” said Chris Cooper, a political science professor at Western Carolina University. “It was like moving from a calculator to a computer. The level of detail due to the technology is what made it unique. If you can target down to every street corner like they did, you take gerrymandering to another level.”

North Carolina is one of several key battleground states, along with Wisconsin and Pennsylvania, whose political norms were upended as a result of the Republican-wave election of 2010. Chief among those norms was voting rights. With their newfound power in statehouses, Republicans systematically sought to limit who could go to the polls by passing strict voter-ID bills. Such was the case in North Carolina, but court challenges have put those restrictive measures on hold until after the 2020 election.

To change those dynamics after the 2020 Census and get a say in the 2021 redistricting, North Carolina Democrats must either overcome a 65-55 disadvantage in the state House or a 29-21 deficit in the Senate. On October 21, in its final analysis of state Legislatures before the election, the Cook Political Report moved the NC Senate from “Lean Republican” to “Toss-up,” while keeping the House “Lean Republican.” North Carolina was one of eight states with one of its legislative bodies moving in the direction of the Democrats. Republicans currently have full control in 28 state legislatures. Democrats have control in 20 and two are divided. 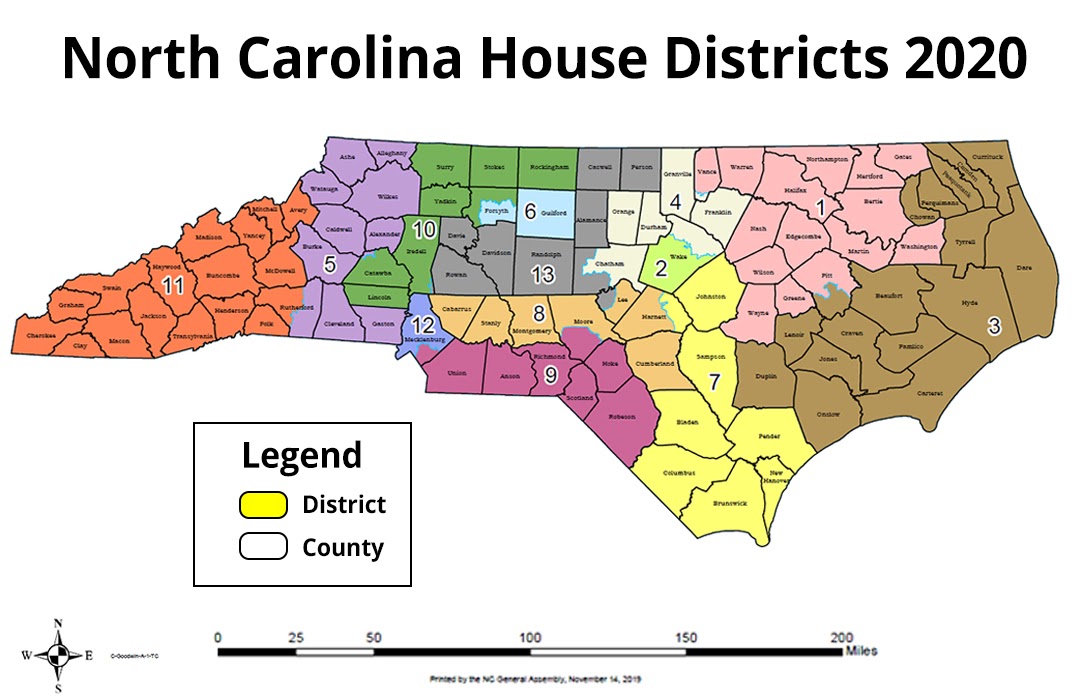 The Democrats need to pick up five seats in the NC Senate—though winning four would give them a tie and control should their candidate for lieutenant governor, state Rep. Yvonne Lewis Holley, win the office that holds a tie-breaking vote (Holley is currently trailing Republican candidate Mark Robinson in the latest poll). Several incumbent Republicans either retired or are on defense in some of the redrawn districts.

“The conventional wisdom is that the Senate is going to be easier to pull than the House,” Cooper said.

Each of the 120 state House districts is composed of around 78,000 voters, so the margins are much tighter there and could be swayed by small changes in the electorate, such as greater participation in college towns, where students from Appalachian State University, Western Carolina University, and UNC Wilmington could play major roles in swing districts. They are three of the state’s biggest public universities, with enrollments between 12,000 and 19,000. The counties where these universities are located all went for Donald Trump in 2016 by an average of 12 points, but two of them — New Hanover (UNCW) and Jackson (WCU) — also voted for Democratic candidate Roy Cooper for governor.

“There are 11 races in the House that are within three points for us, so this is the best chance we’ve had there in a decade,” said Amy Cox, co-founder of FLIP NC, a Chapel Hill-based, all-volunteer nonprofit that uses targeted voter-outreach data to help elect progressive candidates. “Most voters don’t understand how important these offices are, what they represent, who their legislative candidates are or how much power can be gained in future years if one party has the power to set redistricting lines. It’s difficult to have conversations with voters about gerrymandering and state maps, but you can make a difference if you reach the right people and let them know.”

Cox and co-founder Briana Brough were working moms and political novices when they founded FLIP NC three years ago. They “were horrified by the election of Donald Trump and regretted not doing more than mostly writing letters” in that campaign. Cox and Brough asked their state representative, Democrat Graig Meyer of House District 50, how they could best help the cause. He suggested Cox’s professional expertise in data analysis would be helpful in jump-starting an organization to make an immediate difference. Soon after, with the help of Duke University economics professor Patrick Bayer, Cox and Brough began pouring through data, pinpointing the counties and precincts where a high turnout of left-leaning voters could be pivotal in winning the state House or Senate. 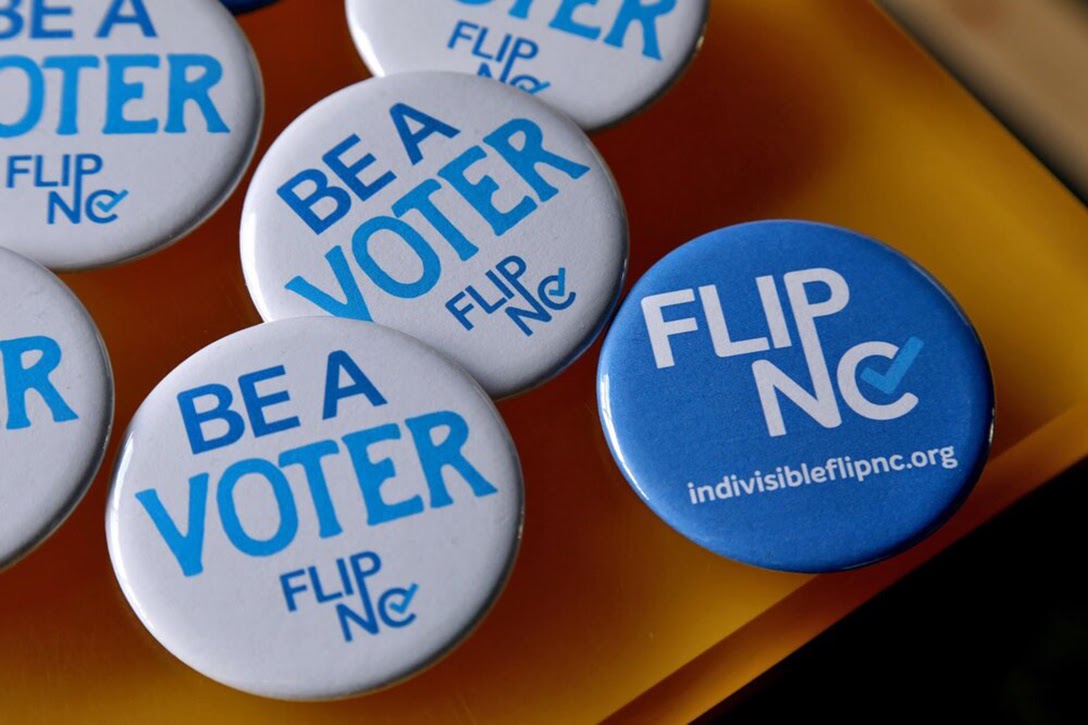 “We figured out the places where we could most help strategically, so we created interactive maps at the precinct level,” Cox said. “We wanted to help other [progressive nonprofits] try to be more strategic as well by providing our data, letting them know that these are the places where you can get out and make a difference.”

In 2018, more than 1,000 FLIP NC volunteers knocked on 20,000 doors and sent out 250,000 text messages to progressive voters in competitive legislative districts, leading to an unexpected Democratic gain of 10 seats in the House and six seats in the Senate. This broke the GOP’s veto-proof supermajority in both bodies, providing Gov. Cooper with the political power he was sorely missing during his first two years in office (2016-2018). Eighteen of the 2018 races in the General Assembly were decided by fewer than 2,000 votes.

Cox said 2018’s results were driven by a sharp increase among Democratic voters in a “blue moon” election year in which there were no statewide federal races at the top of the ticket to help bring out voters. Democratic turnout increased to 53 percent, a 12-point boost over the 2014 midterm election. What has Cox most excited for the 2020 election is the major surge she saw in 2018 among infrequent voters registered as Democrats or independents.

Democrat Jeff Jackson is a three-term state senator from Charlotte whose district was drastically redrawn to include 23 percent more registered Republicans as a result of last year’s court order. He is fighting for his political life this year against well-funded GOP challenger Sonja Nichols, but he sees the chance to fulfill his legislative dream of passing an anti-gerrymandering bill that would create an independent commission to redraw district lines.

“If we take both chambers, I think the odds of passing a constitutional amendment to end gerrymandering will be very, very high,” said Jackson, who will be unable to campaign a week before the election due to a three-week stint of National Guard duty.

According to Professor Cooper, even a split House and Senate — with the Democrats holding on to the governorship — could entice Republicans to make a deal that would render extreme gerrymandering a thing of the past in a state that has earned its reputation as a poster child for the practice.

“If there’s not a clear partisan dominance, that may be the only path to have a truly bipartisan redistricting-reform bill,” Cooper said. “I still wouldn’t hold my breath. If either party thinks for a minute that they can benefit from the status quo, it’ll be hard for a politician from either side to stand up against that orthodoxy.”

The professor summed it up this way: “You’re talking about a state where the only thing Democrats and Republicans agreed on last year was a bipartisan bill to make the Moravian cookie the official state cookie.”