When Florida’s voter registration website crashed in the final hours before the state’s October 5 registration deadline, voting-rights organizations were quick to call out the crash as voter suppression — even after the deadline was pushed to the next day at 7 p.m. Almost immediately afterward, a coalition of these groups filed a lawsuit against Gov. Ron DeSantis (R), asking for the deadline to be extended two days to October 7 at 11:59 p.m. On October 9, US District Judge Mark Walker declined to enforce the extension on the grounds that it caused too much trouble for local election officials in an already chaotic election year.

On October 5, thousands of people were barred from entering the site because of what officials say was an overload of user traffic to the system.

“We started to test [the website] ourselves, and when I first tested it, it took forever to load, and I got an error message,” said Patricia Brigham, the president of the League of Women Voters of Florida, one of a number of groups that formed the voting-rights coalition in the wake of the site crash.

“This court notes that every man who has stepped foot on the Moon launched from the Kennedy Space Center, in Florida. Yet, Florida has failed to figure out how to run an election properly — a task simpler than rocket science.”

The next morning, October 6, Florida Secretary of State Laurel Lee (R) announced that potential voters would now have until that day at 7 p.m. to register, giving voting organizers only nine hours to notify Floridians of the change before the system would close again. Lee’s attorney said that 40,000 people registered to vote during that original extension period. Voting-rights groups, however, say that the total number of new registrants could have been much higher had the deadline been extended to October 7 instead, as their lost lawsuit demanded.

In his ruling, Walker cited the system’s failings as a systemic problem of the Republican Legislature: “This court notes that every man who has stepped foot on the Moon launched from the Kennedy Space Center, in Florida. Yet, Florida has failed to figure out how to run an election properly — a task simpler than rocket science.”

Still, he wrote, “Florida’s interest in preventing chaos in its already precarious — and perennially chaotic — election outweighs the substantial burden imposed on the right to vote.”

While thousands were potentially kept from registering during the voter registration site crash, Walker decided that forcing local election officials to extend their deadlines could pose an even greater risk to voting.

This challenge to voter registration also comes at a time when the process has already faced numerous other challenges as a result of the COVID-19 pandemic.

The Center for Election Innovation and Research’s report on new voter registrations in 2020, released in June, showed the COVID-19 pandemic as a major driver of that decline. With many of the conventional ways people register to vote closed or rendered inaccessible — such as the DMV, grassroots door-to-door registration schemes, and voter registration drives — the avenues for registering and engaging voters became greatly limited. 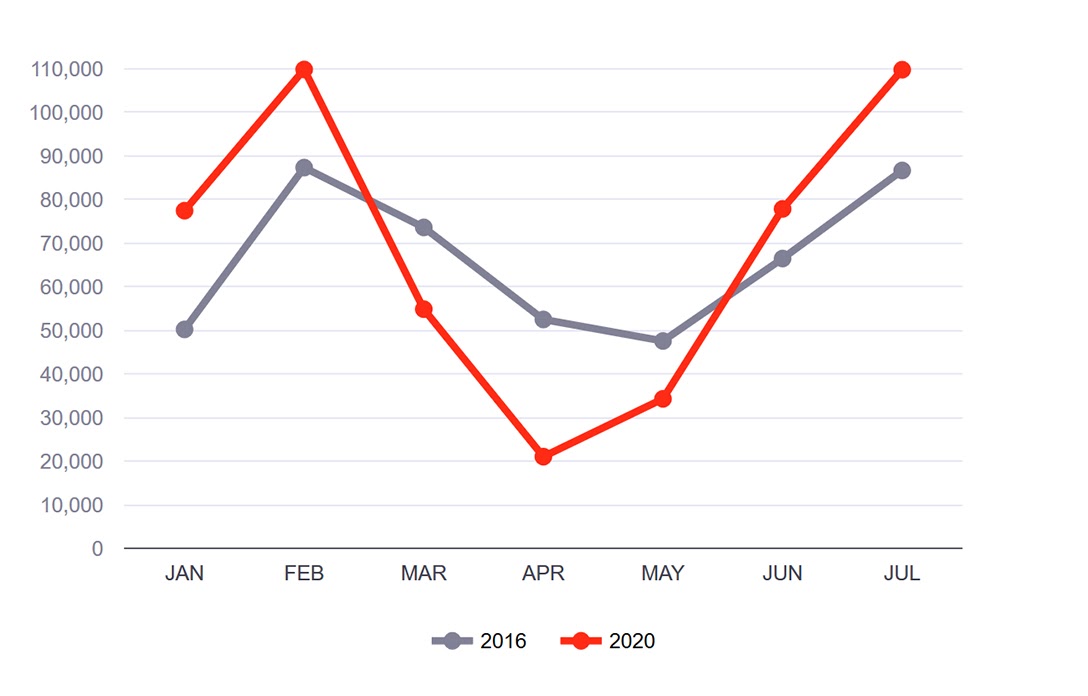 When 19-year-old college freshman and Miami native Carlos Prio-Touzet registered to vote for the first time earlier this year, he did so in person. A community organizer in a mask approached him from a safe distance with a voter registration form in hand, and Prio-Touzet filled it out right then and there. “It was a pretty easy process,” he said. For most of Florida’s prospective voters, however, such a process was far from the norm.

The pandemic has crucially impacted the ways people register to vote across the board. In the past a large number of registrations came from paper forms, but because of reduced door-to-door voter registration drives and voter registration booths where they were usually distributed, voter registration has dropped. Instead, new voters had to register through Florida’s online voter registration form, which — on top of being susceptible to crashes as evidenced on October 5 — is cumbersome and difficult to navigate, according to Justin Atkins, the state director of NextGen America’s Florida chapter.

“We’ve had almost 20,000 conversations where people said they will be voting this year.”

NextGen Florida, focusing on younger voters, turned completely to remote organizing. Rather than hosting the large-scale drives that had made up the bulk of their voter engagement efforts in the past, the organization encouraged online registrations and ran a large mail program with the Voter Participation Center, mailing registration forms with prepaid postage out to people.

The Florida chapter of the organization would normally run a robust voter engagement program at dozens of college campuses characterized by in-person events such as concerts, festivals, and carnivals, all with the purpose of increasing voter registration among young people.

“Now with Covid-19, we’ve kind of switched up our strategy a little bit,” says Atkins. “We’re very adamant about meeting young people where they’re at, and right now, they’re online. So what we’re doing is throwing events online.” Among those were an online drag show and events featuring celebrities like Laverne Cox.

Engage Miami, another organization focused on youth engagement, followed a strategy similar to NextGen’s due to the pandemic.

“We have not gone back to doing in-person work,” said Gilbert Placeres, the organizing director for Engage. “Our voter registration has all become digital: a digital site where people can register to vote and register to vote by mail, outreach with phone calls — almost 900,000 phone calls since the transition — digital ads, mailers, texts, Instagram posts. They have been really successful and we have still been able to reach a bunch of people.”

Santiago Avila Jr., the chairman of the Republican National Hispanic Assembly, is focusing on increasing support for President Donald Trump specifically through television ads, door knocking, and conversations with church members. “I can tell you that the polls [show that] under the Hispanic vote, they’re actually favoring President Trump,” Avila said.

Despite that claim, polls show that Trump is lagging behind Biden in support. A 2018 Pew study found that 67 percent of Latinx people in the greater United States believe the Trump administration’s policies have been harmful to Latinx communities.

The League of Women Voters, which is policy-driven and nonpartisan, also focused their efforts digitally, using social media, email newsletters, and phone banking to reach their membership. Their phone banking effort attempted to reach returning citizens with past felony convictions whose right to vote was restored after the passing of Amendment 4 — so long as they pay all outstanding legal financial obligations, as per a qualification on Amendment 4 passed by Florida’s Republican-controlled Senate that many have dubbed a poll tax.

Because these financial obligations are in many cases incredibly expensive, millions of returning citizens simply don’t have the means to pay them and therefore remain disenfranchised. To mitigate this, the League of Women Voters also joined other groups to organize around enfranchising otherwise eligible returning citizens.

Now, with the registration deadline passed, these same organizations are shifting their efforts to voter turnout. After all, voter registration rates only matter if those same people actually end up voting.

The League of Women Voters is using its social media platforms to encourage people to register to vote by mail and to send their ballots in no later than October 13 to avoid any delays with the Postal Service. Otherwise, Brigham says, they’re encouraging people to vote early or submit their mail-in ballots via physical drop box.

“We’ve had almost 20,000 conversations where people said they will be voting this year,” says Placeres of Engage’s voter outreach work. Engage’s voter turnout efforts in years past have proven successful — young people with whom they communicated turned out to vote at 200 percent the rate of the general young population, and Placeres is confident that their success will continue.

“Full steam ahead for the next month!” he said.

The only time that Engage Miami organizers are going back to the field physically is on Election Day, Placeres says. The organization’s volunteers will be working as poll monitors. “We want to make sure there’s no voter intimidation, that everything is reported and resolved quickly. People will be trained in de-escalation and what to watch out for. Hopefully it won’t be needed, [but we] want someone to know what the rules are, so they can redirect people to where they need to go.”

In Florida, the early voting period runs from October 19 to November 2, with Election Day on November 3. Floridians can still register to vote by mail until 5 p.m. on October 24. Early voting and vote by mail deadlines are different for every state. You can look up your state here.