Did you hear what happened when Russian President Vladimir Putin called the White House to discuss foreign affairs?

“Hello, Donald? I would like to discuss Ukraine with you,” Putin began.

This joke continues a tradition of bleak political humor in Russia, dating from communist-era purges and disappearances to the current environment where Kremlin critics risk fines, arrests, beatings, jail, and occasional assassinations. Too apathetic or scared to rally, let alone revolt, average Russians resort to jokes, known as anekdoty.

“They remain the main genre of oral tradition in the folk culture,” Moscow-based linguist and author Sandjar Yanyshev told WhoWhatWhy.

Anekdoty circulating online gain instant popularity all over Russia, in other countries carved from the former USSR, and in Russian diasporas from California to Israel. Millions visit websites dedicated to anekdoty, creating a comic democracy of sorts. Anyone can submit a joke, vote it up to the top of the daily list, or down into virtual oblivion.

Anekdoty become memes, tweets, Facebook posts, and sketches on YouTube. Some make it onto a handful of comic shows on Russian television networks.

Inspired by the Wailing Wall in Jerusalem, Donald Trump said, “Let’s build one next to Mexico and let them wail on the other side.”

Trump watches the Olympics only to find out how high Mexican athletes can jump.

One recent joke combines alleged Russian interference in US elections with growing disillusionment about Putin’s 20 years in power:

Putin is determined to wreak havoc on the US, but so far, he’s been practicing on Russia.

An even more cynical joke emerged circa 2008, after Putin’s second presidential term expired and he hand-picked Dmitry Medvedev, a former deputy prime minister, to keep the presidential seat warm for him.

Putin arrives at a restaurant with Medvedev and orders a steak. The waiter asks, “And what about the vegetable?”

After taking a long look at Medvedev, Putin answers, “The vegetable will have steak too.”

Constitutional amendments adopted in March 2020 that “nullified” Putin’s four presidential terms, allowing him to stay in power until 2036, triggered a new batch of jokes ridiculing his KGB history and mocking his leadership:

A list of Russian czars: Alexander the First, Nicholas the Second, Vladimir the Zero.

There are dozens of anekdoty about opposition leader Alexey Navalny, a badge of honor of sorts — because if Russians joke about someone, the person could and should be taken seriously. 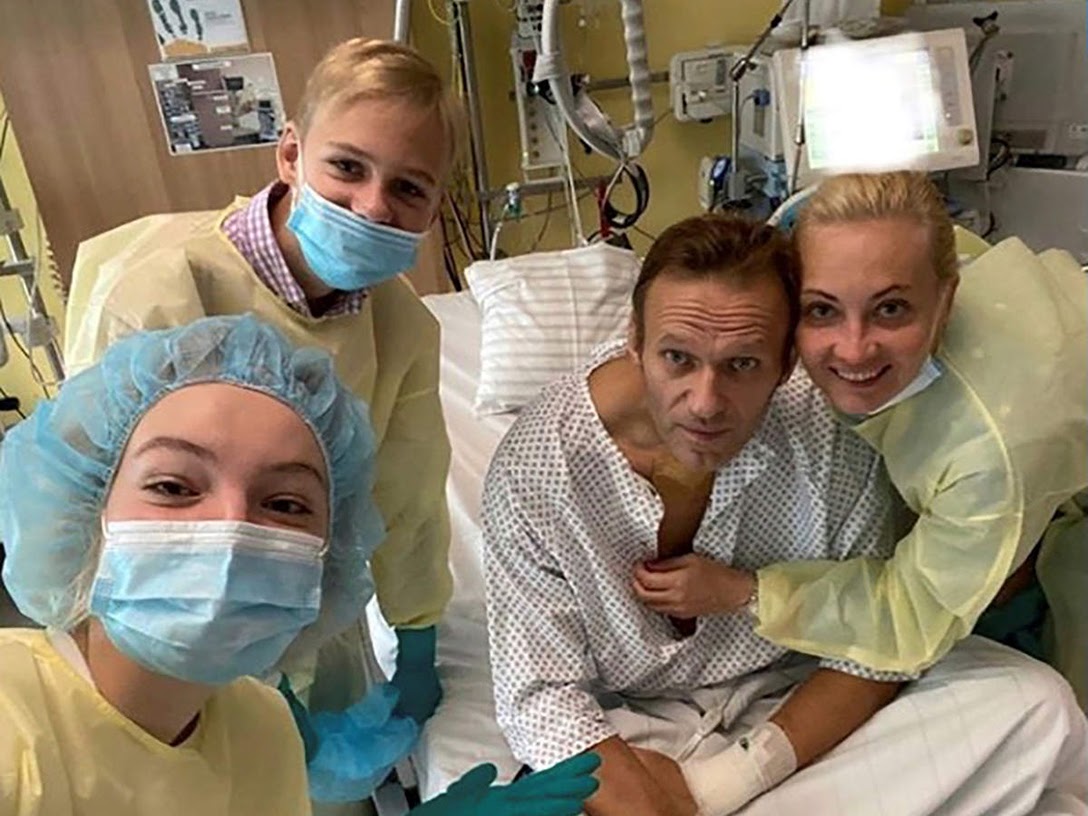 Alexei Navalny in Berlin’s Charite hospital recovering from poisoning. Navalny is accompanied by his wife, Yulia, and their children. Photo credit: @navalny / Insatgram

Days after Navalny’s August 20 poisoning with Novichok, a powerful chemical weapon, on a trip to Siberia, this one emerged:

German and Russian experts argue whether opposition leader Alexey Navalny was poisoned with a lethal chemical weapon. The Russian proposed a radical solution — to perform an autopsy on him.

Not to be outdone, the American satirical news site the Onion joined in the fun:

“The last time I went there, I got so sick I honestly thought I was going to die,” said Navalny, who added that in the future he would not give his business to any establishment that “screws up something as simple as a cup of tea” by preparing it with Novichok…

Navalny cut his teeth in politics as an anti-corruption blogger with nationalist leanings. One of the first jokes about him dates back to the days when pro-Kremlin figures and media accused him of being financed by the West:

How does the US Department of State fund Navalny? Washington uses property tax collected from Russian oligarchs and officials who own real estate in the US.

In Russia, anekdoty have always been a litmus test of public opinion. Telling a joke about Soviet dictator Joseph Stalin could land the speaker in jail, or even in front of a firing squad, but humor remained the only way of keeping one’s sanity.

“It was a way of preserving at least a pocket of independence and individuality in the face of a totalitarian machine that strove to control all walks of Soviet life, including the language,” Pavel Luzin, a Russian-based specialist in international relations with the Jamestown Foundation, a Washington think tank, told WhoWhatWhy.

So, Soviet citizens risked their lives by satirizing Stalin’s ruthlessness or heavy Georgian accent. Nikita Khruschev’s bald head was compared to a barren field on a collective farm, and his successor Leonid Brezhnev was mocked for his mumbling speech, dense brows, and senility. 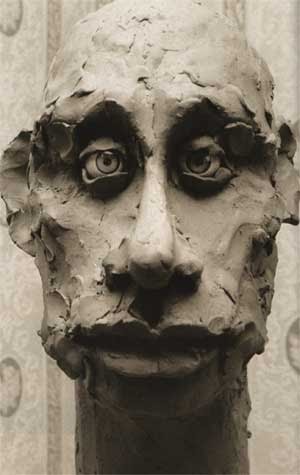 The Putin puppet that appeared on the Russian TV show “Kukli.” Photo credit: President of Russia (CC BY 4.0)

Putin and his government have shown limited appreciation for humor. Puppets, a wildly popular television show featuring a doll named Utin, was shut down in 2001.

After singing a song criticizing the Orthodox Church’s support of Putin in Moscow’s main cathedral in 2012, two members of Pussy Riot, a punk feminist rock band, spent two years in prison after being found guilty of “hooliganism motivated by religious hatred.”

Probably because of the risks, jokes help mobilize critics. “They are still a way to blow off steam, but they also help preserve the group identity of those who disagree with Russia’s current political order,” Luzin said.

Oddly, Putin himself likes to crack a joke or two — probably more so than any previous Russian leader.

“If you want to go all the way and become a Muslim radical and are ready to get circumcised, I invite you to Moscow,” Putin told a French reporter in 2002 who had criticized the killing of civilians in Chechnya amid a campaign against militant Islamists. “We are a multi-confessional country, we have experts in this field, too. I will recommend that they carry out the operation in such a way that nothing grows back.”

In 2013, while talking to German Chancellor Angela Merkel about European Union policies, Putin said, “No matter what you do during the wedding night, the result should be the same [i.e., you get screwed], you understand?” Merkel didn’t appreciate the joke, judging by her deadpan air.

Few Western leaders would get away with jokes like that, but in Russia, it works. “In a patriarchal paradigm of thinking, everything is hierarchical, it’s either you’re on top, or you’re the bottom,” a Moscow-based psychologist told WhoWhatWhy on condition of anonymity. “And jokes humiliating the dignity of others send an apparent message — ‘I’m on top.’”

Days after regaining consciousness in a German hospital, Navalny started joking too — about the Kremlin’s claim that he poisoned himself to damage Putin’s reputation.

“To die in a hospital in Omsk and end up in the Omsk morgue, where they would conclude that the cause of my death was ‘He’s lived enough’ — that was the final goal of my cunning plan,” Navalny wrote on Facebook on September 23. “But Putin overplayed me. You just can’t fool him. As a result, I spent 18 days in a coma like an idiot, but didn’t achieve my goal. The provocation didn’t work!”