A day after in-person early voting began with computer glitches and long lines in Georgia, thousands of enthusiastic voters showed up undaunted at polling sites across the state to cast their ballots.

Veteran Albert Feliu, who lives about an hour north of Atlanta in Gwinnett County, said the reports of eight- to 12-hour wait times from the first day of in-person early voting didn’t scare him away. He was determined to ensure his ballot would be counted.

“I served in the armed forces, so the right to vote is paramount,” Feliu said. “There are too many graves at Arlington National Cemetery from people that died for me to get the right to vote. My right to vote, next to my faith, is one of the most sacred things I hold true in my life.”

Another voter, Ulanda Whitaker, said she and her family, made up of three generations, waited almost eight hours Monday to vote in person in Gwinnett. She and her family returned Tuesday to pass out water and granola bars.

“My parents are elderly, and they almost passed out, and so we just felt that we would come back and help,” Whitaker said. “We wanted to make sure people would have what they needed to stay in line. I don’t want any voter to feel like they have to give up because they’re tired, it’s hot, or they’re thirsty. We’re going to come back every day until the end.”

Georgians like Feliu and Whitaker are not only deciding in the hotly contested presidential race between Donald Trump and Joe Biden, but also in two senate races and many other local races for the November general election.

Despite the issues at several polling places on Monday, state officials said more than 128,000 went to the polls the first day, more than any other day of in-person early voting in prior elections, according to state election data. 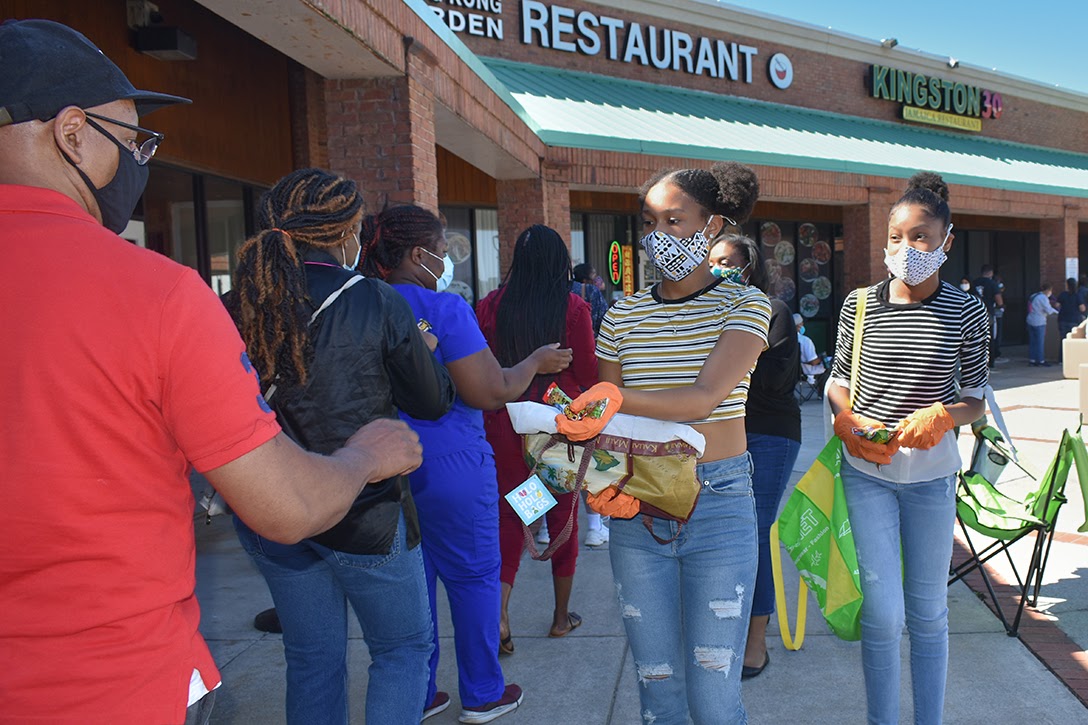 Ulanda Whitaker and her family passed out water and snacks to voters on Tuesday to encourage them to stay in line. She and her family waited almost eight hours on Monday to vote in person in metro Atlanta. Photo credit: Chamian Cruz / WhoWhatWhy

Over the next three weeks, there will be over 60 early voting locations in metro Atlanta’s four core counties, including more than 30 in Atlanta’s Fulton County alone.

“It’s always important to vote, but this year is very, very important,” Whitaker said. “There are some key issues that we wanted to make sure we voiced our preference for. We weren’t getting out of line no matter what.”

Feliu arrived at the Gwinnett County Voter Registration and Elections office at 8:30 a.m. and waited seven hours to vote in a line that stretched throughout an entire shopping center. Most people wore face masks, some sporting  the word “VOTE,” while some came prepared with folding lawn chairs.

“We know this election is going to be the Super Bowl of elections,” Feliu said. “This country is too precious not to vote. I don’t care, Republican or Democrat, do your duty and vote. … Voting is not an inconvenience. It’s a sacred obligation.”

Though still long, wait times drastically dropped to between one to three hours at other polling locations in Gwinnett County on Tuesday, in part because of fewer computer problems and also because it wasn’t a holiday like Monday. As an IT project manager, Feliu said he believed there was more the county could do to reduce wait times and improve voting conditions.

“From an infrastructure standpoint we should be much better prepared,” he said. “This is what I do for a living. There are two or three other storefronts here that could be converted to voting locations. They could have security there and this line would not be as bad as it is. … I think logistically they are woefully unprepared.”

Elsewhere in Georgia, such as in Fulton County, where there was a computer glitch at a polling place inside State Farm Arena in downtown Atlanta the day before, officials said voters could expect to be in and out in about 15 minutes.

During a press conference on Tuesday, Fulton County officials strongly encouraged voters to use that specific polling place, which is equipped with 60 check-in stations and 300 voting machines. Officials said it was the best prepared to handle a lot of people.

However, there were other, less visible issues facing Georgia voters. A federal judge on Sunday acknowledged major security flaws with Georgia’s new ballot-marking device system, which was used for the first time this summer and was partly the cause of long lines then too.

The voting machines do not store ballots. Instead, voters fill out their preferences on the touchscreen, the results are printed out and scanned, and then they are stored in locked boxes. The system also relies on electronic poll books that replace old-fashioned paper poll books.

According to the 147-page order, Judge Amy Totenberg of the United States District Court for the Northern District of Georgia heavily criticized the state and manufacturer for major security flaws with the system, as well as for flaws with its implementation.

“Amidst the many other serious concerns facing the public in this challenging era, issues surrounding election system security, reliability, fairness, and the correct counting of votes continue on the forefront of citizen concerns,” the order states.

Still, Totenberg denied a request by a voting-rights group, the Coalition for Good Governance, to switch to hand-marked paper ballots for the November election, saying making changes this close to the election “could cause electoral disruption and potential voter confusion.”

“Though major difficulties have arisen during the course of this new system’s rocky first year,” the order states, “the Court recognizes that the staff of the Secretary of State’s Office and county election offices have worked hard to roll out the system in short order during a Covid-19 pandemic era that presents unique hurdles. That hard work though does not answer the fundamental deficits and exposure in the system challenged by Plaintiffs.”

Totenberg continued in the order that some changes would be implemented if possible by the January 2021 Senate runoff election, specifically regarding the threshold settings for scanners that read and tabulate hand-marked absentee ballots.

The Coalition for Good Governance argued the scanner settings improperly discarded marks that a human would decipher as votes. In response to the concerns, the State Election Board voted to lower the threshold to count any mark that fills more than 20 percent of the oval as a vote and anything less than 10 percent as a no vote; a mark between those two would go to a three-person review panel.

“The Court recognizes the major challenges facing the Secretary of State’s Office in rapidly implementing a new statewide voting system,” Totenberg wrote. “Yet the vital issues identified in this case will not disappear or be appropriately addressed without focused State attention, resources, ongoing serious evaluation by independent cybersecurity experts, and open-mindedness.”

Totenberg previously ruled against ditching electronic voting three other times in 2018, 2019, and earlier in 2020.