Bango, Bernie Brewer, and the five Racing Sausages are again out of a job.

The Milwaukee sports mascots were scheduled to attend early voting events later this month at Miller Park and the Fiserv Forum, the homes of the city’s baseball team, the Brewers, and its basketball team, the Bucks, after the postseason dreams of both teams were shattered. But they faced an unexpected elephantine opponent — the Republican Party of Wisconsin — which claimed their presence would violate state election law by encouraging people to vote.

Brewers spokesman Tyler Barnes told the Associated Press that no players or mascots would be present at voting sites. Then the City of Milwaukee Election Commission abruptly canceled the events altogether. The reason was concern that the use of the sites was in violation of a Wisconsin Elections Commission order that set a June 12 deadline for authorizing early voting locations. The arenas were not confirmed until September 1. Thirteen other early voting sites will be open in Milwaukee.

Before it was called off, the idea generated unexpected controversy when Wisconsin GOP Chairman Andrew Hitt sent a letter to Milwaukee’s Election Commission accusing the mascots of electioneering. That was just after the Sausages appeared at a drive-thru voter registration event at Miller Park. It’s the latest Republican move that appears to be aimed at discouraging voters who oppose the GOP’s agenda, in this case in a city that is a Democratic stronghold and could determine the outcome in this battleground state.

The Wisconsin statute defines electioneering as “any activity which is intended to influence voting at an election,” which Hitt said means not only persuading a voter to favor one candidate over another, but also any attempt to persuade a voter to cast a vote.

The letter prompted a rebuke by the City of Milwaukee Election Commission’s Executive Director Claire Woodall-Vogg, who, in comments to the Milwaukee Journal Sentinel, called it “ludicrous.” She told AP that the cancellation was not linked to the letter.

“This is obviously disappointing BUT we don’t want the potential for any votes to be illegitimate. It’s become increasingly harder for people, especially, communities of color, to find safe and accessible places to vote and we were excited for [Fiserv Forum] to provide that space,” Alex Lasry, a senior vice president for the Bucks, tweeted. “However, it’s clear one side wants to make it harder to vote while the other wants it easier and more accessible. We will continue to work with all our partners to engage, educate and register voters.” 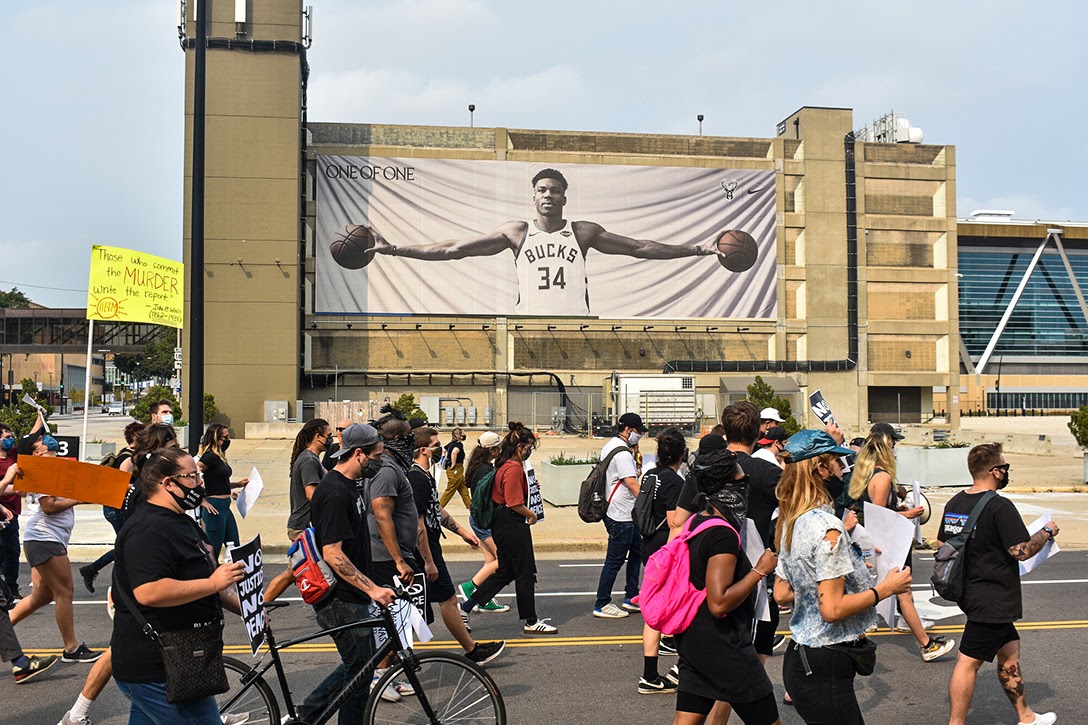 Hitt, Woodall-Vogg, and spokespersons for the Bucks and Brewers did not respond to requests for comment.

But Jay Heck, executive director in Wisconsin for voting-rights organization Common Cause, saw the Republicans’ electioneering allegations as something more sinister.

“It’s another case where I think the Republicans, who didn’t like this, they seem to think that more voting is bad for them, which I think is a real problem in and of itself. That suggests that they don’t have faith in their own ideas and that in order to win, they need to have fewer people voting, which is very different than what we think of in a democracy, where we have many people participating and the winner is the person who gets the most votes,” Heck told WhoWhatWhy.

In 2011, the Republican-majority state government passed some of the nation’s strictest voter ID laws, which critics say has turned Wisconsin into one of the most difficult places to cast a ballot. Wisconsin accepts 12 forms of photo ID — including a Wisconsin driver’s license and US passport. A federal court ruled in 2016 that the state has to provide a free ID to anyone who asks.

Proponents of voter ID laws say they prevent voter fraud, which studies have repeatedly shown to be extremely rare. Instead, this legislation inhibits young people and people of color from voting, Heck said, as they have the least access to acquiring a driver’s license or other forms of accepted ID. A 2017 UW–Madison study showed that Wisconsin’s requirement deterred over 16,000 people from voting in the 2016 presidential election.

As the coronavirus pandemic surges, Republicans have shifted to contesting early and absentee voting measures encouraged by municipalities to reduce crowds at polling places on November 3.

One of the hardest-fought battles has been over the deadline for counting absentee and mail-in ballots. On October 8, a three-judge panel on the 7th Circuit Court of Appeals ruled that all ballots must be delivered by 8 p.m. on Election Day, effectively staying a decision by US District Judge William Conley that allowed ballots postmarked by November 3 to be counted if they arrived up to six days later. The Wisconsin Supreme Court had ruled on October 6 that Republicans could appeal that decision to be heard by the full 7th Circuit Court after that same panel unanimously upheld Conley’s decision.

This maneuver, Heck said, constitutes “a very, very serious form of voter suppression” because “that could conceivably mean that the votes of tens of thousands of Wisconsinites would not be counted.” He recommended that voters turn in their ballots by mid-October.

“The Republicans don’t want those votes counted. They want them thrown out,” he said.

The Madison City Clerk’s Office also attracted attention from the state Republican Party with its “Democracy in the Park” event, which allowed people to register to vote, drop off completed ballots, or bring their blank ballots for poll workers to witness. Wisconsin Republicans have said they may seek to invalidate the ballots collected at “Democracy in the Park” on the grounds that it violated the state’s early voting laws. Meagan Wolfe, the administrator of the Wisconsin Elections Commission, said the initiative was legal because the organizers did not issue ballots and only absentee voting took place. In-person early voting begins on October 20.

At the first “Democracy in the Park” event, one couple apparently tried to trick poll worker Emily Mills into saying the organizers were committing actions illegal under state election law. Mills said they asked her “a series of questions that were very leading.” The couple left after the man said he had heard the event was sponsored by Democratic presidential nominee Joe Biden and “didn’t get what they were looking for.” Andrea Singletary, a poll worker who volunteered on October 3, said she was told by Madison City Clerk Maribeth Witzel-Behl to assume people or drones would record the event, although she did not hear about or see any.

There are concerns that partisanship will escalate into intimidation.

“Let’s start protecting our voters. We know where they are. … Let’s start playing offense a little bit. That’s what you’re going to see in 2020. It’s going to be a much bigger program, a much more aggressive program, a much better-funded program,” he said in a leaked audio recording.

Clark later walked those comments back, telling AP that “neither I nor anyone I know or work with would condone anyone’s vote being threatened or diluted and our efforts will be focused on preventing just that.”

His comments came a year after the expiration of the consent decree, the result of a 1981 federal case against the Republican National Committee for voter intimidation in New Jersey. The decree barred the RNC from engaging in “ballot security” efforts.

In Fairfax, VA, where early voting is already underway, a group of Trump supporters chanted “Four more years!” outside a polling place. Although the demonstrators stood 100 feet away and did not block access to the building, election officials said some voters felt intimidated and required an escort by county employees to feel safe entering the venue.

Common Cause recruits poll watchers and has an election protection program with a toll free line — 1 (866) OUR-VOTE — which people can call if they are facing intimidation or harassment, Heck said.

Activists have also said online that going to vote with a past arrest would be used against people, which Heck said is “totally untrue. These are tactics that are just trying to discourage people, particularly poor people, or people who have been in jail for one reason or another.” Common Cause volunteers monitor social media for any false information meant to discourage voting.

In Michigan, two conservative operatives — Jacob Wohl and Jack Burkman — were charged with four felonies related to voter intimidation and computer crimes. The two men falsely told residents of Detroit and other metropolitan areas in at least four other states that voting by mail would “subject people to arrest, debt collection and forced vaccinations,” according to Michigan’s attorney general, Dana Nessel.

“There’s never been an election that’s been more important,” Heck said. “I think it’s the most important election for people of any age, just because of what’s at stake. I can’t imagine not wanting to participate.”