An early casualty of the COVID-19 pandemic, The New Theatre (TNT), a UK-based theater group specializing in Shakespeare, was forced to cancel its spring and summer performances. The group is now preparing to go into action again. Its answer to social distancing: stage its performances outdoors at some of the most picturesque castles and palaces in Europe. As part of a collaboration on international coverage, WhoWhatWhy and Global Geneva asked TNT’s artistic director, Paul Stebbings, to describe the group’s plans to tour Europe and what it was like to close down during the pandemic:

Ever since the coronavirus struck earlier this year, forcing the closure of theaters and cinemas from London to Bangkok, the industry has been in dire crisis. Directors, actors, stagehands, sound technicians, and designers found themselves out of work. Certain venues have partially reopened, but not enough to ensure sustainability. Earlier this month, even with COVID-19 spiking, British musical producer Andrew Lloyd Webber stated that the UK government needs to give a date for the reopening of theaters at full capacity. If not, he warned, the arts will find themselves at the “point of no return.” Webber has come up with suggestions on how theater can operate safely. But he is not the only one. Other performers, such as TNT, which is based in London and Munich, are pursuing their efforts to keep the act on the road.

Produced by the American Drama Group (ADG)-Europe, TNT has been touring Switzerland and other parts of Europe for decades. Each summer we perform a Shakespeare play in the courtyards of Lake Geneva’s wonderful castles of Chillon and Prangins. This year, we are offering Othello, but it has been a near miracle that we are able to perform at all in the midst of a global pandemic.

In March 2020, the company had six productions touring from Mexico to Poland. Yet in one vile week, we had to cancel all of them. We also had to move fast to bring actors back from across the globe, sending them into unemployment. Black Friday, March 13, saw the last of our tours canceled.

Since then, we have struggled to keep the company alive. We have done so primarily through the generosity of our supporters rather than state aid. We are now preparing for an autumn season across Europe. Our first tour consists of this tragic Shakespearean masterpiece. Without question, Othello must rank as one of the finest plays ever written. 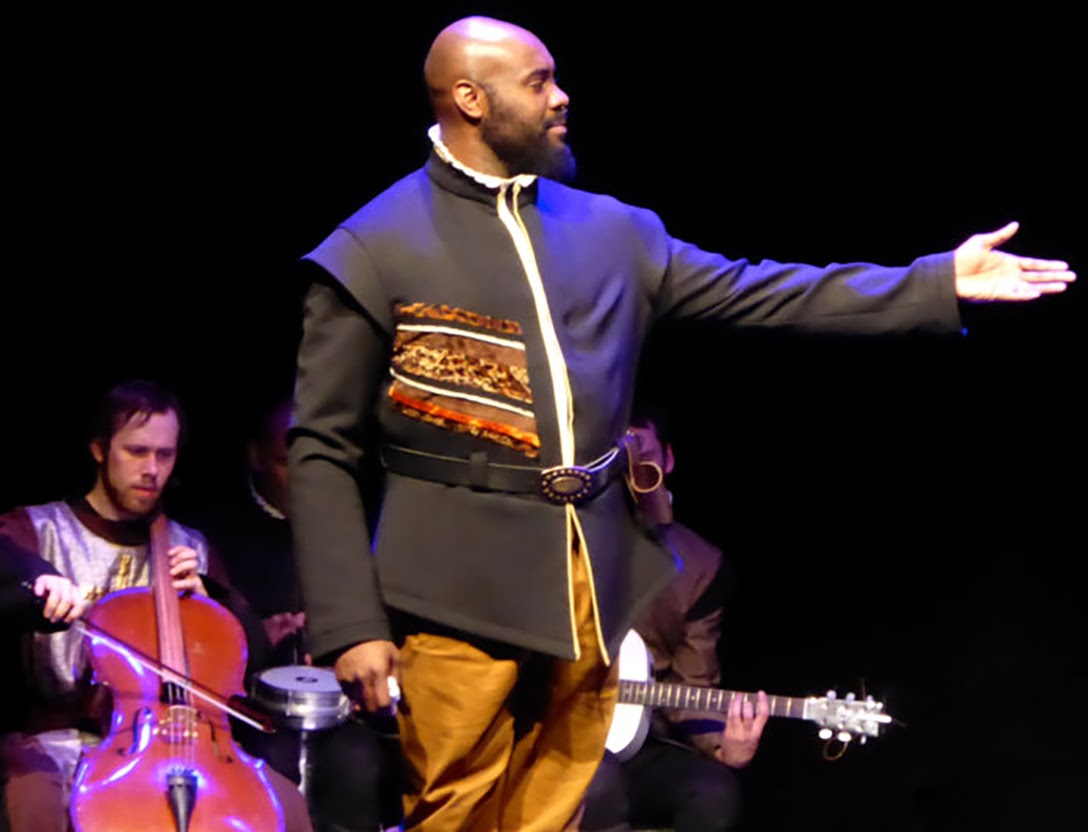 Our initial production closed after only six performances in March. However, we reopened in late August using castles in Germany and Denmark as our stage settings. Our heroic actors have come back together to sail on these choppy seas, no longer packing shelves in supermarkets or isolating in rural France, but taking to the stage once again.

The tour runs until mid-October with planned performances at over 30 castles and palaces in five countries. Chillon Castle, at the eastern end of Lake Geneva near Montreux, and Prangins, just outside Nyon, have been on the annual castle tour for decades. We have built a loyal following who will hopefully return to support us.

The production was originally scheduled to be performed in our usual June slot with audiences often sipping wine and aperitifs in the courtyards or gardens before settling down to enjoy the performance. We are particularly grateful to the authorities at Chillon and Prangins for rearranging the dates to allow us to return this autumn. 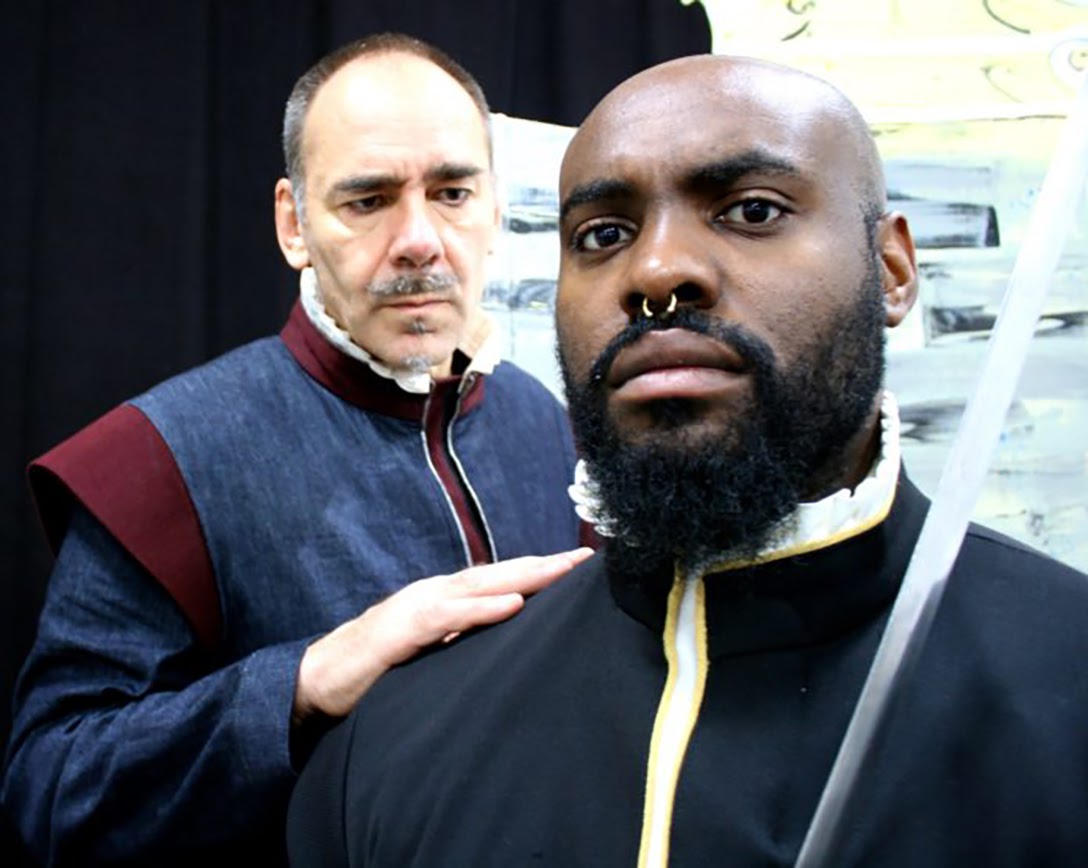 I have a personal attachment to Chillon Castle, as my family parked our caravan nearby when I was a child. I was swept away by the romance and grandeur of what might be the most sensational castle on the planet. Years later, while directing Shakespeare in Shanghai, I passed a 6-foot wall painting of Chillon on a busy Chinese street. The world knows Chillon.

However, our two Swiss venues are marvelously different — Chillon is powerful and medieval; Prangins is elegant and baroque. And behind both lie the stunning Lake Geneva and the Alps beyond. During the interval, I always go to stare across the lake, a lake that has hosted so many notable British artists such as Lord Byron, Mary Shelley and a personal hero of mine — Charlie Chaplin. A truly inspiring place.

I have been directing Shakespeare across the world for over 25 years, and Othello is one of my favorites. Our production aims to shed light on and to elucidate the original rather than impose a simple interpretation. And our setting is historical. This must rank as Shakespeare’s best constructed play — an extraordinary romantic thriller and a profound examination of the nature of evil. It’s exciting and accessible with clearly defined characters and a plot that drives forward with relentless energy. 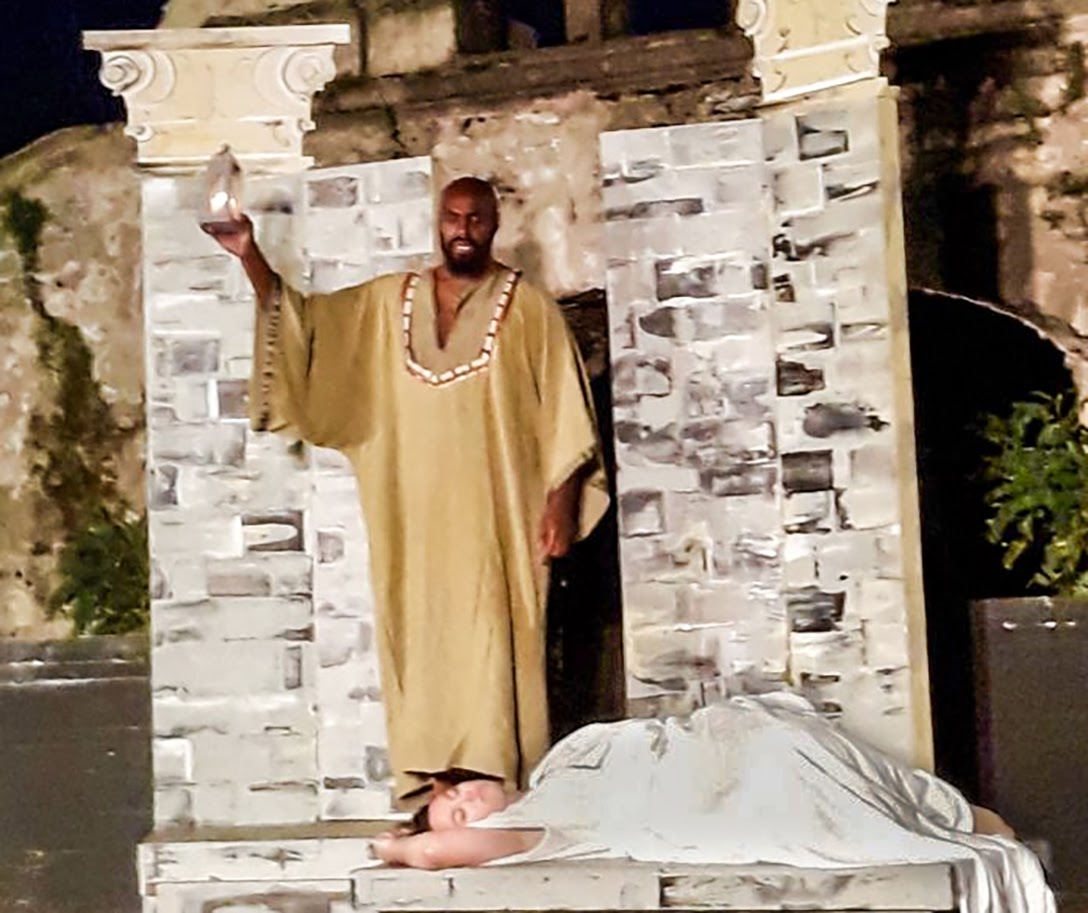 Our version includes a live score by composer Thomas Johnson. The actors themselves play cello, guitar, and percussion and sing four-part harmony throughout — so that the music operates almost as a film score — heightening the emotion and suspense of this sensational thriller. The play also contains one of Shakespeare’s most heartbreaking ballads, “The Willow,” sung by the betrayed and doomed Desdemona.

Shakespeare, as usual, offers no easy answers or polemics. The Bard asks us questions that are relevant and pressing in today’s troubled world. Why does Iago spend so much energy destroying Othello and those who surround him? Iago does not seem to have much to gain or even to truly understand his own motives. I think that there is a lesson here as we view our own troubled times. Populist politicians and misled electorates seem hell-bent on self-destructive courses from which, if they only stood back, they would surely think again.

TNT and our producer, Grantly Marshall of ADG-Europe, face an uncertain future, hemmed in by the coronavirus and Brexit. But we will not surrender to these forces of nature or man. We have managed to be back up and running before (we think) any other international touring company. What is it to be human if our lives can only be lived in separation or digitally? We are social animals and theater is the most social of arts. So we hope to welcome our audience back to the castles of French-speaking Switzerland and reaffirm our humanity in the company of the greatest playwright (and poet?) who ever graced this planet — William Shakespeare. 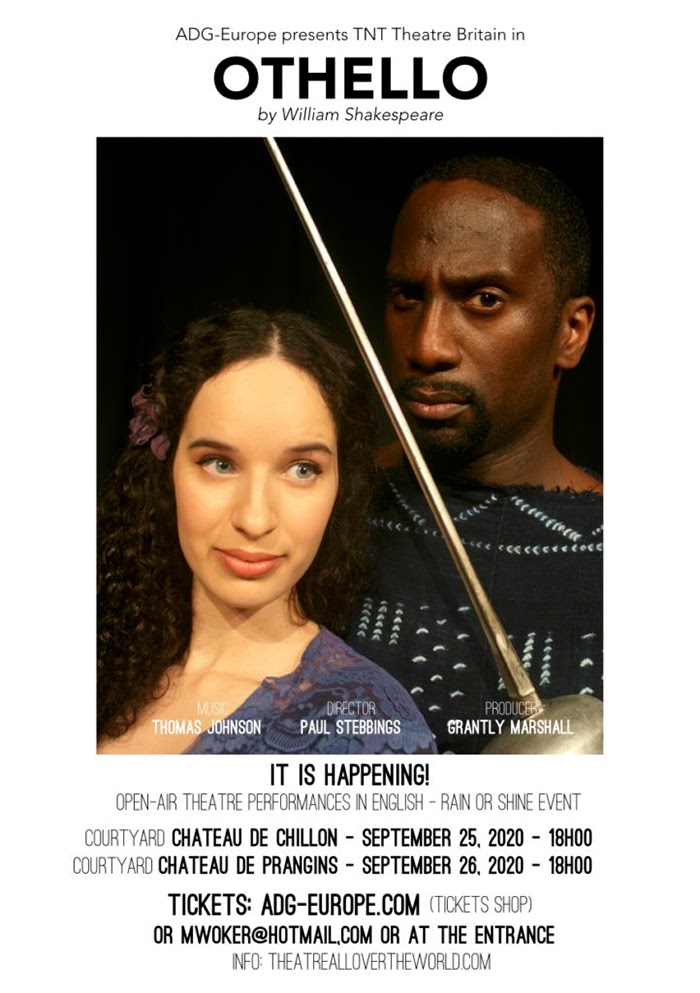 British-German Paul Stebbings was born in Nottingham in the UK, but lives in Munich. He studied at the University of Bristol Drama Department and is now artistic theater director of TNT and the American Drama Group Europe. He is an associate director of Teatro Espressivo in Costa Rica, a regular director at the Shanghai Dramatic Arts Center and has toured his productions to over 40 countries worldwide.