WhoWhatWhy’s Nicole Elliott was at the center of the firestorm that erupted in Portland, OR. Between intermittently violent protests and approaching, uncontrolled wildfires, Elliott kept a journal until finally she was forced to evacuate. This is her account of what it was like to be at the center of the turbulence.

As I sit down to write this, it feels like I’m writing a journal in a movie about Mars. A reddish-orange hue shines through my tightly shut windows. In a state where the mornings are usually characterized by a haze of fine mist and the smell of pine, today the sky is orange and the city reeks of soot.

Today marks my 473rd day in Portland, the 106th day of the protests, and the 5th day of the Oregon fires. I have never really been one to quantify the days of my life in such a way, but 2020 has seemed to slow, like some kind of time warp.

This is the journal which I began after I watched the video showing the death of George Floyd:

The grief I feel is painful. I cannot even imagine what it is like to be Black.

Protests came by my street today. I joined as we walked through the streets singing songs being riffed by the people leading the march.

We ended the night with a vigil at the track by my apartment. 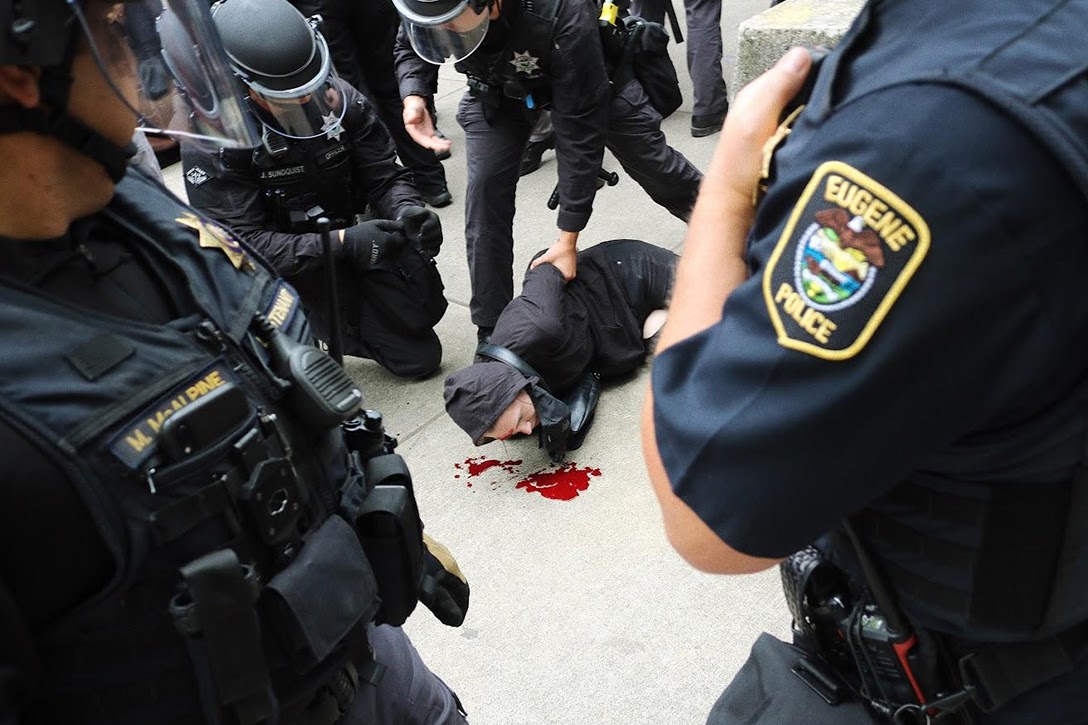 A woman bleeding after a confrontation with police in Portland, OR, in 2019. Photo credit: Nicole Elliott / WhoWhatWhy

The general sadness is palpable. I honestly have trouble finding the words to make sense of the confusion.

I keep thinking back to what is the only instance of outright violence by the police that I have seen.

When I first got to Portland, the Proud Boys came into the city to provoke antifa. I saw a woman have her face smashed in.

A small school bus, with Trump iconography everywhere, came speeding down the street into a group of protesters. The crowd threw whatever was in their hands at the vehicle, and then the police stepped in.

The woman standing next to me was shoved by a cop in riot gear. She cursed at him and shoved him back. He took his foot and knocked her legs from under her, and with his hands on her neck, shoved her head into the concrete.

In retrospect, she wasn’t prudent — but there was no serious threat of violence from her. A group of police encircled the women, barricading her with bikes, blocking everyone’s view of her.

It was about 10 minutes before medical attention arrived.

I am afraid of the police in a way that I have never been before.

While reviewing my notes, I just opened my freezer as a last-resort effort to get some cool, filtered air into my apartment. It doesn’t have A/C, which is normally not a problem, but I’ve been sitting in stale, smoky air for four days now. I still can’t open any doors or windows without choking. Hell, I can hardly be in my bedroom without choking.

I am sitting in my apartment, watching the view from my windows slowly fade into thicker darker smoke. I would try to evacuate, but I don’t have a car and have been avoiding public transportation because tensions are high in Portland — the coronavirus hasn’t helped.

I went to the Portland Protests downtown today. If I didn’t know better, I’d describe the scene as similar to a party. Maybe people have been cooped up so long they feel like this is an opportunity to get out. People had drums and black masks covered their faces; cocaine and lit joints were being passed around. 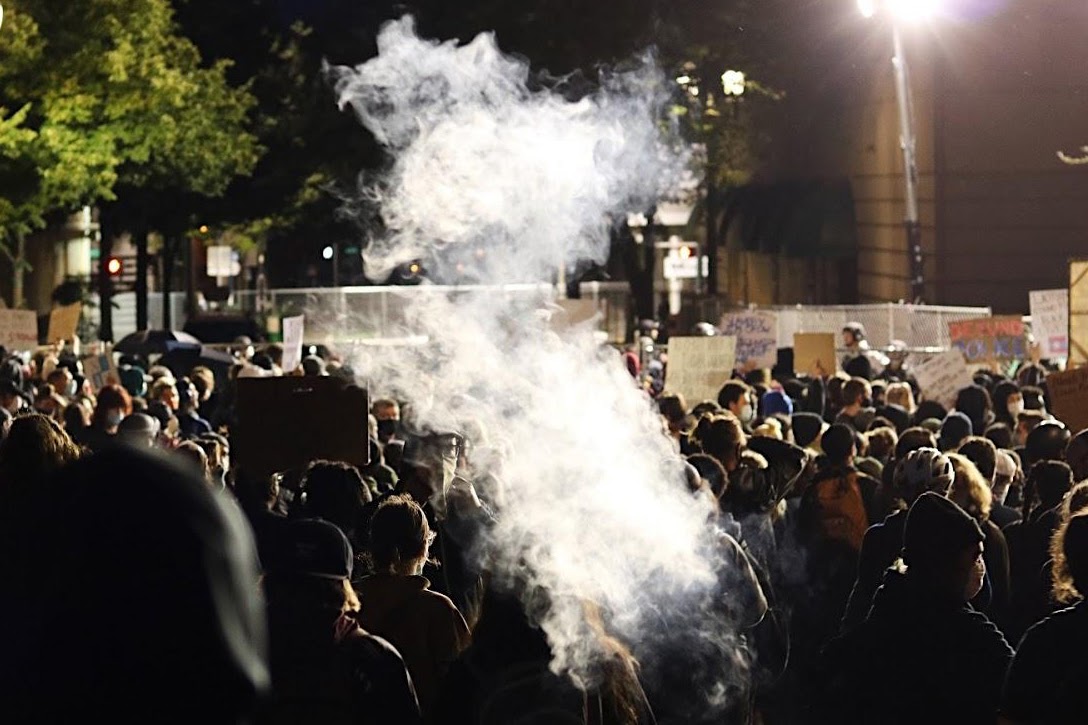 People surround the Multnomah County Justice Center in Portland, OR, in the early hours of the night. Photo credit: Nicole Elliott / WhoWhatWhy

If people had not been wearing masks, the coronavirus would have seemed like it was in the past.

Everyone was chanting: “I can’t breathe,” “Hands up, don’t shoot!,” “Say her name, Breonna Taylor,” “Say his name, George Floyd,” “No justice no peace, abolish police,” and “ACAB – All cops are bastards.” I don’t agree with the last one.

I stood at the fence separating the crowd from the police outside the Justice Department building that had been broken into a few days earlier. The contempt in people’s eyes was striking. People are really angry, more so than before. I have been hearing fireworks, police sirens, and tear gas guns go off in the distance. I guess both sides are tired of being shot at.

The sadness that was so present before is less prevalent. I hear a lot of people playing NWA’s “Fuck Tha Police.” That could be the anthem for 2020.

The man standing next to me was shining a flashlight through the fence and into a police officer’s eyes. I could tell that this had been going on for some time, as the police officer, whose blue eyes were lit up, focused intensely on the man provoking him.

I wanted to ask him to lower his flashlight.

I regret not doing so.

The Portland I see online is not the one I see when I look out my window.

I have never been more aware of the power that video has on the internet. Snippets of violent moments in time that I see through my phone define the Summer of 2020. These photos and videos have also come to define Portland and the protests in general.

The videos being circulated have fueled hate on both sides. Conservatives and liberals have transformed social media — and the mainstream media, for that matter — into a battleground as they fight to dominate the narrative. I keep reading that over 93 percent of the protests are peaceful, which is closer to the reality that I have experienced. As an outsider tuning in, it would be hard to get that impression. My parents certainly haven’t.

In the last month, I’ve seen video of police kneeling in the street in the face of protesters, clashes between the Proud Boys and antifa, rioters on fire, police brutalizing protesters, protesters firing back at the police with fireworks, and the list goes on.

In daily life, I can sometimes hear the police over the bullhorns, and I am happy when the protesters walk by.

When I went to the protests, I heard people sing, listened to people’s stories, and watched as water bottles and snacks were passed around.

I worry about the power of politicians to spin the narrative. President Trump’s remarks annoy me. No one conflating the riots with the protests is working to unify this country. I wish politicians would give people the opportunity to look at things in a nuanced way, but I guess the ones who do that don’t win elections.

With everything happening, I can’t help but call to mind Bobby Kennedy’s speech from 1968 when he gave the news of MLK’s assassination to the people of Indianapolis:

Martin Luther King dedicated his life to love and to justice for his fellow human beings, and he died because of that effort… For those of you who are black and are tempted to be filled with hatred and distrust at the injustice of such an act, against all white people, I can only say that I feel in my own heart the same kind of feeling. I had a member of my family killed, but he was killed by a white man. But we have to make an effort in the United States, we have to make an effort to understand, to go beyond these rather difficult times.

My favorite poet was Aeschylus. He wrote: ‘In our sleep, pain which cannot forget falls drop by drop upon the heart until, in our own despair, against our will, comes wisdom through the awful grace of God.”

Let us dedicate ourselves to what the Greeks wrote so many years ago: to tame the savageness of man and make gentle the life of this world.

After Kennedy’s speech, Indianapolis was the only major city to not riot about MLK’s assasination.

He spoke with empathy, not condemnation.

Writing in my journal Friday, I remembered it was 9/11. I am from New Jersey, so today is usually a big deal for me. My dad was on the first floor of the first World Trade Center tower to be hit in 2001. He made it out fine, but other people from my hometown died or were deeply psychologically affected. My brother’s birthday is tomorrow, and I remember having to cancel his 7th birthday party then.

It feels weird having forgotten.

I revisited the Justice Center today. There are smashed windows as high as the 12th floor.

Graffiti is all over the city, but it seems to be concentrated on the wooden boards that companies have been using to cover their windows from rioters. What adorns the wood I might classify as closer to art. I see floral murals, portraits of George Floyd and Breonna Taylor, and a lot of graffiti hearts. There are also many “ACAB” tags.

Other than the mask I wear, I have almost altogether stopped thinking about the coronavirus.

The mask feels like it is more for the smoke.

I have to be honest, it feels kind of odd to insert myself into the center of the discourse on this matter. I am evacuating tonight — so I might be off grid for a bit.