A pending ruling by the partisan Wisconsin Supreme Court has the potential to change the outcome of the presidential election in a critical swing state, by adding the Green Party’s candidate to the ballot and upending the absentee voting timetable.

Jay Heck, executive director of Common Cause Wisconsin, said the timing of the court’s ruling and the potential to disrupt absentee voting are the biggest concerns. Common Cause is a nonpartisan organization that seeks to encourage voting and promote safe and secure elections.

“The question now is whether the court is going to act in a timely manner, in the next day or two, and make it possible for the ballots to go out as they are, or to put into place some process that will mitigate whatever needs to be done to have new ballots printed,” Heck said Saturday.

The Green Party asked the state Supreme Court to overrule the deadlocked Wisconsin Elections Commission and add its presidential candidates to ballots for the November 3 election. A ruling in the Green Party’s favor would force municipal election officials to reprint ballots in a costly and time-consuming process, making it unlikely they could be mailed on time. Wisconsin statutes require ballots to be in the mail by September 17, while federal law requires ballots to be mailed no later than September 19 to overseas and military voters.

The Wisconsin high court issued an order September 10 halting absentee ballot mailings while it considered the Green Party request, although some municipalities had already started to send them out. The order also required the Elections Commission to submit the name and address of every person who had requested an absentee ballot thus far, and — if ballots were already sent out — the date they were mailed.

The court had originally been expected to rule on the case by Friday, but no ruling was issued despite pleas from municipal election officials for a quick decision.

The high court ruling was approved by a slim margin, with conservative-backed justices in the 4-3 majority.

Green Party voter petitions seeking to add presidential candidate Howie Hawkins and vice presidential candidate Angela Walker to the Wisconsin ballot were challenged because Walker’s address was incorrectly listed on some petition documents. The state Elections Commission consists of three Democrats and three Republicans, who deadlocked 3-3 in a partisan split over whether to add the Green Party candidates to the ballot. The tie vote let stand a decision by the commission staff to leave off their names. The commission met August 20, but the Green Party did not pursue a ruling by the state Supreme Court until September 3. 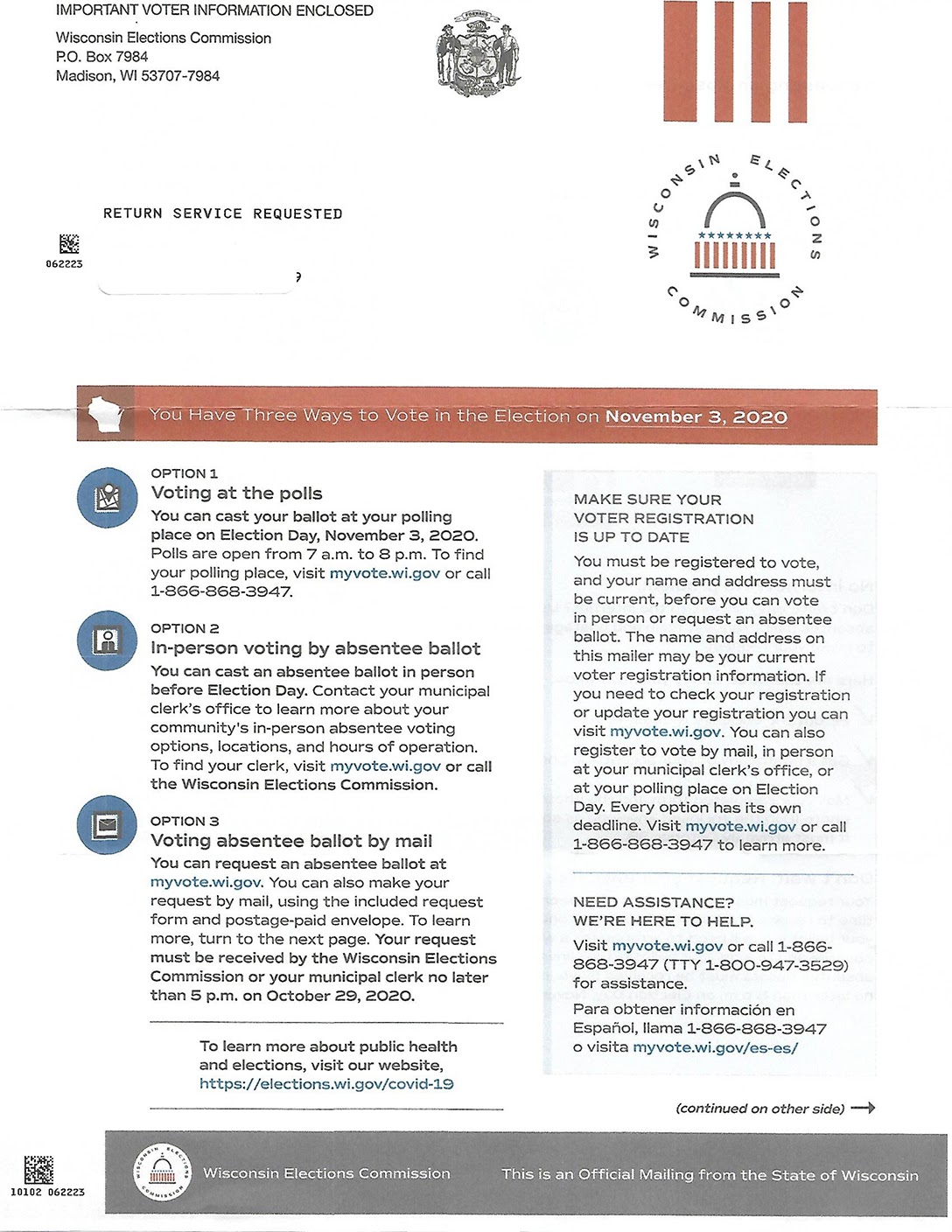 The September 10 ruling by the high court was approved by a slim margin, with conservative-backed justices in the 4-3 majority. While the court is officially nonpartisan, the two major parties campaign heavily for specific candidates, and justices often split along ideological or party lines. In April, the court’s conservative majority also overturned Democratic Gov. Tony Evers’s executive order postponing Wisconsin’s primary election.

“The most disturbing part is that people look at this decision and see that it’s totally infected by partisan political decisions,” Heck said. He noted that the Green Party could have appealed the Elections Commission ruling immediately after it was issued, rather than waiting for two weeks until after most municipal clerks had already prepared absentee ballots for mailing.

“There’s a lot of blame to go around but the losers are ultimately possibly going to be a lot of Wisconsin voters who are going to find that the ballots they are applying for through the absentee process may not get to them until shortly before the election,” Heck said. “The question will be whether they can get them back on time.”

“To us, it’s plain as day that we should be on the ballot.”

Wisconsin Green Party co-Chair Barbara Dahlgren expressed frustration with the process of getting on the state ballot, which was complicated by the difficulty of collecting signatures during a pandemic. She noted that the Elections Commission staff decision was based on a technicality. As an all-volunteer organization with limited resources, Dahlgren said the Wisconsin Green Party responded as quickly as it could.

“We would like for the Supreme Court to rule on this quickly because to us it’s plain as day that we should be on the ballot,” Dahlgren said, adding she was unaware of any GOP support for efforts to add the Green Party candidates.

In the 2016 presidential election, Green Party candidates might have affected the outcome in Wisconsin. Jill Stein, the party’s presidential candidate that year, received 31,106 votes. Donald Trump won the state by a 21,177-vote margin. That meant, in theory, that if Stein had not been on the ballot and all those voters had switched to the Democratic candidate, Hillary Clinton, she would have won Wisconsin.

Last-minute ballot changes are difficult to make in Wisconsin, where Heck said elections are among the most decentralized in the nation. Wisconsin’s 72 county clerks print ballots, collect election results, and coordinate their canvassing boards, while 1,850 municipal clerks at the city, village, or township level operate polling places and handle absentee ballots.

Tim Tollefson, the full-time clerk for the town of Harmony in Wisconsin’s Rock County, has already prepped envelopes to mail absentee ballots. If the court’s ruling changes the timeline, he’ll simply delay his plans to stuff the envelopes and put them in the mail. But if the state Supreme Court rules ballots must be reprinted, Tollefson said Harmony would be unable to meet the September 17 mailing deadline for absentee ballots. The township would also be required to pay a share of Rock County’s estimated $25,000 bill for reprinting ballots.

Adjusting to a new timetable would likely be more difficult in some of the state’s small rural communities, where budgets are tight and the clerk is often a part-time employee who has a full-time job elsewhere.

Heck noted that keeping up with absentee voting requests is already likely to be challenging for municipal clerks, who handled almost 1.1 million absentee votes in the April 2020 primary election. That is expected to double for the November 3 presidential election, with almost 1 million absentee ballots requested to date. The state Elections Commission recently mailed absentee voting applications to all 2.6 million eligible voters, who have until October 29 to mail them back. All absentee ballots must be returned to collection centers by 8 PM on Election Day.

The Wisconsin Supreme Court is also expected to be asked to rule on whether celebrity Kanye West should be added to the presidential ballot. A Brown County Circuit Court judge ruled Friday that West does not qualify for the ballot, upholding the commission’s 5-1 vote to bar West because his campaign submitted petitions after the 5 PM deadline August 4. West’s campaign missed the deadline by seconds.

West’s petitions were filed by Lane Ruhland, an attorney who formerly served as the Wisconsin Republican Party legal counsel. Ruhland recently represented the Trump campaign in its lawsuit against a Rhinelander television station for running an advertisement that the Trump campaign considered “false and defamatory.”