Last Monday night, Tropical Storm Marco brought record-level rainfall to Pensacola, FL. Even as the torrents fell, Rep. Matt Gaetz (R-FL) took to the virtual floor at this year’s Republican National Convention and said not one word about climate change.

While Gaetz’s constituency in Florida’s 1st Congressional District battled the outer bands of the storm, their public servant denounced the purported “socialists” and “woketopians” of the Democratic Party.

The next night, as Hurricane Laura grew stronger, Florida’s Lt. Gov. Jeannette Nuñez (R) warned the country about the dangers of a “sociaist takeover.”  She, too, said nothing about climate change.

In fact, not once in the four days of the Republican National Convention was climate change mentioned. Nor were its devastating effects, which were demonstrated so dramatically every day of the convention. Experts were calling Hurricane Laura “unsurvivable” — as so many people found out the hard way. The ultimate death toll was 16. And at least 404,000 in Louisiana and 104,000 people in Texas were left without power. 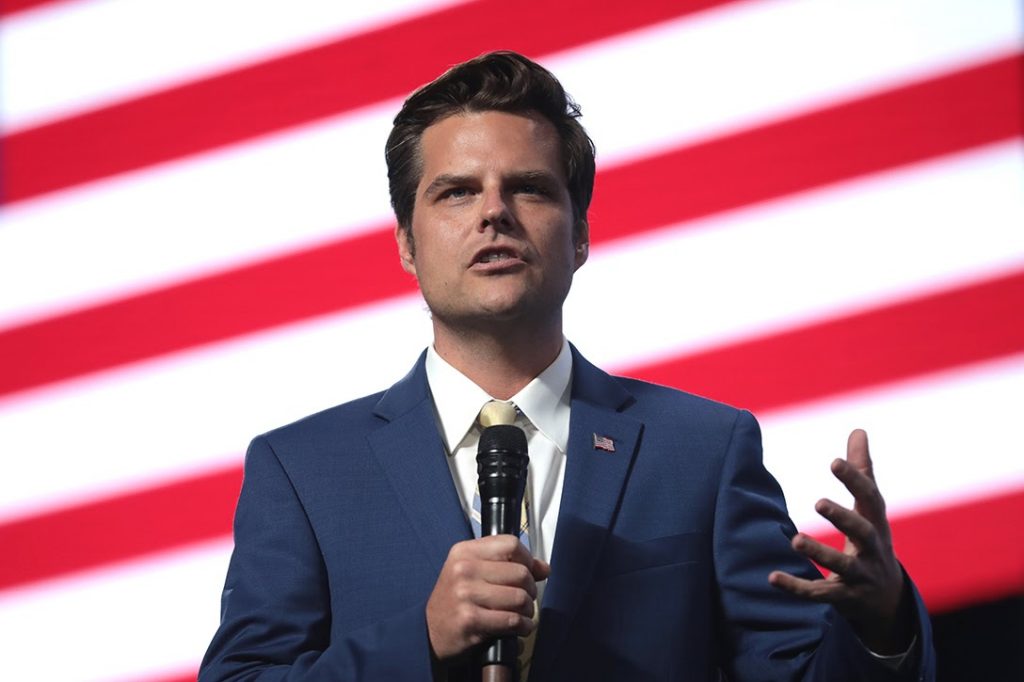 Gaetz has his own “Green Real Deal” and is part of the bipartisan Climate Solutions Caucus. Yet, he spent none of his three allotted minutes at the RNC on this plan. Nuñez similarly opted to focus on relaying the hyperbolized dangers of the prospect of a Democratic president and praising President Donald Trump, rather than addressing how Republicans would help her state amid growing risk of climate-fueled crises.

The Republican Convention’s 2020 platform, which is an exact copy of the platform from 2016, states that “climate change is far from this nation’s most pressing national security issue. This is the triumph of extremism over common sense, and Congress must stop it.” This assertion is a far cry from recent polling that shows 64 percent of Americans believe that protecting the environment should be a top priority for Congress and the White House, and 52 percent say that dealing with climate change should be a top priority for the country as well.

Spokespersons for Gaetz and Nuñez did not respond to a request for comment.

The last time two tropical storms blew into the Gulf of Mexico at the same time was in 1959. In a hurricane season already projected to bring about a record number of named storms (the average number of projected named storms per year is 13, whereas this year up to 19 have been predicted), Marco and Laura brought with them an unprecedented threat. Both storms are also the earliest “L-named” and “M-named” storms in any hurricane season on record.


“We’re not even halfway through the season, and we’re already up to M. We still have a lot more season left, so in the short term, the message is clear,” says Joel Cline, the tropical weather coordinator at National Oceanic and Atmospheric Administration’s National Weather Service.

The increase in the number of hurricanes this season follows a trend that has been in place since the 1970s, Tom Knutson, a climate researcher at the US Geophysical Fluid Dynamics Laboratory, told WhoWhatWhy. Though many have attributed this long-term increase in storm count to a warming climate, Knutson urges caution:

Global temperature increase and hurricanes, however, are closely related. This year specifically, the number of hurricanes has been attributed in part to warmer ocean temperatures in the Atlantic. Warmer oceans — generally when above 80 degrees Fahrenheit — serve as fuel to growing storms, providing tropical systems with the favorable conditions needed to expand and intensify into tropical storms and eventually hurricanes.

The world is also facing increased rainfall — a 7 percent increase in rainfall for every 1 degree Celsius that tropical sea surface temperatures rise. Wind speeds will batter coastlines and residential areas harder — increasing in intensity by nearly 3 percent for every 1 degree Celsius increase, according to Knutson’s findings at the Geophysical Fluid Dynamics Laboratory.

Gaetz’s and Nuñez’s lack of comments were part of a total erasure of climate change at the Republican convention.

Benji Backer, the president of the American Conservation Coalition, a conservative environmentalist activist group, has said, “To see an issue that the Republican Party knows is a long-term problem for the party not get addressed in a presidential convention, which sets the agenda for the next four years, it’s really frustrating.”

It seems the Republican Party is in a bind, caught between those in the party who acknowledge the realities of the crisis and those who, like President Trump, prefer to write it off as a hoax.

“We know the climate is changing, it always changes,” said Republican Rep. John Curtis from Utah in an address at the Sutherland Institute’s “Confessions of a Climate Conservative” event on August 24.

“And yet, Republicans don’t view it that way,” he said, “They tend to refuse to answer the question. And my experience is if you don’t answer that question, you don’t get a seat at the table, and you get branded as not caring about the Earth.”