Russian President Vladimir Putin messed up neighboring Belarus. Now he can squash it.

The countries resemble two conjoined twins straight out of Total Recall, a 1990 sci-fi flick starring Arnold Schwarzenegger. One is small and screaming: Belarus, a landlocked former Soviet republic the size of Kansas. The other is huge and gloomy — Mother Russia.

Since gaining independence in 1991 after the Soviet Union collapsed, Belarus has muddled along without much outside attention. President Alexander Lukashenko, a former collective farm chairman with a thick chevron moustache and gray comb-over, prides himself on keeping his nation of 9.5 million people as a mini-USSR preserved in amber — even though it borders three European Union nations and pro-Western Ukraine.

Soviet-era collective farms and state-owned factories provide modest yet stable income for peasants and workers. They were Lukashenko’s diehard support base — at least until a few weeks ago, when tens of thousands started daily rallies to protest his sixth reelection. The government said he received 81 percent of the votes cast August 9, a feat viewed with extreme skepticism by political opponents, dissidents, and outside observers. The US and European Union, among others, rejected the results.

Lukashenko was dubbed “Europe’s last dictator” when his opponents were sentenced to jail,  tortured for protesting his landslide reelections — or disappeared without a trace.

For the first time in Belarusian history, the working class joined urbanites and intellectuals opposed to Lukashenko’s regime. Strikes paralyzed dozens of key factories, and workers at one of them booed the dumbfounded president off the stage.

“He’s got zero legitimacy and respect after he spilled blood,” Oles Makarevich, a steelworker at the giant MTZ tractor factory in the capital, Minsk, told WhoWhatWhy. According to monitors, media reports, and officials, at least three protesters died, almost 7,000 were detained, and hundreds were brutally beaten during the rallies.

The leading opposition candidate, Svetlana Tikhanovskaya, is the wife of an opposition blogger who has been jailed since May. She fled to Lithuania after the vote, but has called for new elections and urged factory workers to continue striking. Her lawyer also submitted a formal appeal August 21 to Belarus’s Supreme Court, seeking to have the results overturned.

Russia, the huge and gloomy twin, is behind the mess. Over the past two decades, it has become Lukashenko’s biggest bulwark, kept Belarus’s economy overly dependent on Moscow — then pulled the rug out from under Lukashenko when he refused to let the country be absorbed by Russia.

In 2019, the Kremlin started pushing Belarus to finalize the creation of the “union state” —  de facto annexation, Crimea-style.

Russia has been the largest and least discriminating buyer of Belarusian milk, cheese, and sausages, as well as outdated tractors and heavy trucks, even though fallout from the 1986 Chernobyl nuclear plant disaster in neighboring Ukraine contaminated one-fifth of Belarusian territory. 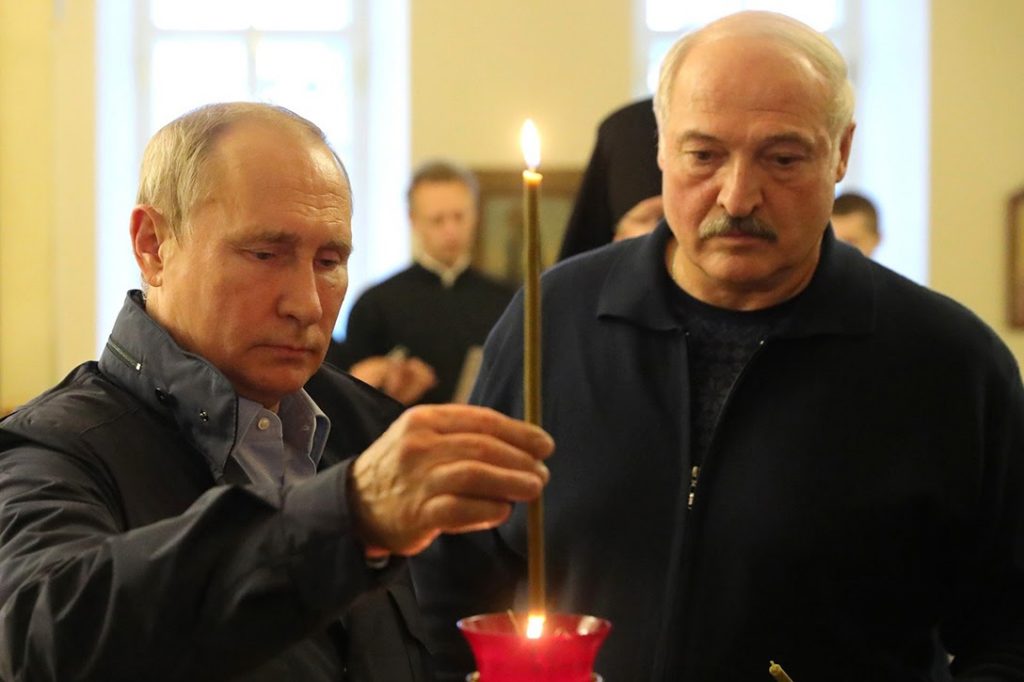 Lukashenko was dubbed “Europe’s last dictator” when his opponents were sentenced to lengthy jail terms, tortured for protesting his landslide reelections — or disappeared without a trace.

“The union state was seen as a soft way to absorb Belarus,” Nikolay Mitrokhin, a researcher at Germany’s Bremen University, told WhoWhatWhy.

After Putin, a former KGB colonel, nestled into the Kremlin in 1999, Lukashenko curbed his enthusiasm and suspended the merger, preferring to curry — or demand — favors. Over the next 20 years, he became Putin’s closest “frenemy,” alternately cajoling or lambasting Russia until he received another multibillion-ruble loan or preferential trade agreement.

Another economic crutch for his regime was a steady flow of remittances from Belarusian migrant workers who toiled in Russia without bureaucratic hurdles, thanks to the elimination of immigration and customs controls.

Moscow has shown few qualms about causing chaos in former Soviet republics. It paralyzed Ukraine after forcibly annexing Crimea in 2014.

But in 2019, the Kremlin started pushing Belarus to finalize the creation of the “union state” —  de facto annexation, Crimea-style, but of a much larger territory. Faced with sagging approval ratings, Putin’s goal was a domestic public relations triumph to distract voters from a weakening economy, Western sanctions, and cancerous corruption.

The merger was supposed to give Putin a chance to bypass a two-term limit and seek reelection in 2024. But Lukashenko fiercely resisted “Russian annexation” (without mentioning it was originally his own idea), so Putin decided simply to amend the constitution to allow his continued rule.

Lukashenko began flirting with the West, including hosting a visit to Minsk by US Secretary of State Mike Pompeo in February 2019. Russia was not amused, and days later stopped providing discount crude oil to Belarus, effectively leaving the government with empty coffers.

So, this year Lukashenko found himself on his own — too toxic for the West and too remote and insignificant to attract interest or economic support from another deep-pocketed influence seeker, China.

Meanwhile, demonstrations and strikes continued, while his exiled rival, Tikhanovskaya, asked the EU Security Council to back the “awakening” of her nation. “I call on you to not recognize this fraudulent election. Mr. Lukashenko has lost all legitimacy in the eyes of our nation and the world,” she said in a video.

Meanwhile, Moscow is sending mixed signals. It recognized Lukashenko’s election victory, but a string of pro-Kremlin figures condemned his violent crackdown on demonstrators, while some Russian-controlled television networks showed the rallies and interviewed protesters.

However, Moscow warns that it will remain the only kingmaker in Belarus.

“Any outside attempts to interfere in the internal affairs of [Belarus], which would lead to a further escalation of the crisis, are unacceptable,” the Kremlin said after Putin had phone conversations with German and French leaders. In a speech to agricultural workers, Lukashenko rejected offers by the US and EU to mediate between his government and the opposition. “They should sort out their own affairs first,” he said.

Whatever the short-term outcome, the Kremlin will still call the shots and eventually pursue the ultimate goal of absorbing Belarus, observers say.

If Lukashenko manages to stay in power, Russia will “reanimate the ‘union state’ project with the adoption of a special constitutional act” to legitimize it, predicts analyst Aleksey Kushch, based in neighboring Ukraine.

But if he falls, the Kremlin will welcome “the arrival of [a] new, weaker government, destabilize the economy, [and spur] the annexation,” Kushch told WhoWhatWhy.

Moscow has shown few qualms about creating chaos in former Soviet republics. It paralyzed  Ukraine after forcibly annexing Crimea in 2014 and supporting a shadowy separatist war in the Donbass region. Those actions plunged Ukraine, a nation of 43 million people, into an economic crisis from which it has yet to emerge.

Kushch compared Belarus to a hospital patient requiring long-term care — “with all the support tubes and equipment controlled by the eastern neighbor.” The prognosis? Guarded.