When MGM — and the FBI — Chased ‘The Father of the Atomic Bomb’ - WhoWhatWhy
Reading Time: 7 minutes

Published this month, The Beginning or the End: How Hollywood — and America — Learned to Stop Worrying and Love the Bomb, reveals how the White House and the military in 1946 sabotaged a long-forgotten MGM movie. That film, also titled The Beginning or the End, was inspired by a letter to actress Donna Reed from her high school chemistry teacher, who later toiled at the secret Manhattan Project site in Oak Ridge, TN.

Two months after the atomic attacks on Japan, he begged her to convince Hollywood to make a major movie that would reflect urgent warnings by the atomic scientists: The US must turn away from building more powerful weapons, which would likely spark a nuclear arms race with the Russians and imperil the entire world.

Soon, MGM would launch such a big-budget project, with studio chief Louis B. Mayer calling it the “most important” movie he would ever produce. Rival studio Paramount attempted a competing movie, with a screenplay written by none other than Ayn Rand.

My new book explores how, in the year that followed, the original message of the MGM movie would shift almost 180 degrees, ending as little more than pro-bomb propaganda. Why? Both President Harry S. Truman (who had given the order to bomb Hiroshima) and General Leslie R. Groves (director of the Manhattan Project) were given script approval, and ordered dozens of cuts and revisions. Truman even mandated a costly retake, and got the actor playing him fired.

Even to get that far, MGM had to convince the key people in the bomb project to sign releases granting permission to be portrayed in the film. This led to desperate attempts over many months to get Albert Einstein, Leo Szilard, and the scientific director of the project at Los Alamos, J. Robert Oppenheimer, to approve, while promising them (unlike with Groves) no fee. Einstein and Szilard, beaten down, finally succumbed, even while believing the movie’s script was poor, but the ever-conflicted Oppenheimer, the so-called “Father of the Atomic Bomb,” resisted.

While this was transpiring, the FBI was also chasing the three men, with a different motive. Each was suspected by J. Edgar Hoover of representing a security risk, even sympathizing with the Soviet Union, due to their generally left-wing views. So, in 1946, agents kept tabs on Einstein’s mail and phone calls in Princeton, NJ. Agents monitored his writings, speeches, broadcasts, and his role with political or science groups, sometimes via informants who attended meetings. FBI director J. Edgar Hoover was known to have called Einstein an “extreme radical.”

Agents tailed Szilard in the street, and also opened his mail, as General Groves sought to bar him from future national security programs. They followed Oppenheimer locally and on his many cross-country trips — and tapped the phone at his Berkeley home.

Of course “Oppie,” as he was known to friends, was especially vulnerable, as his wife and brother (and his late mistress) had all been members of the Communist Party, as were several of his former associates. Yet for all their searching and harassing, the agents could not find evidence of his disloyalty. 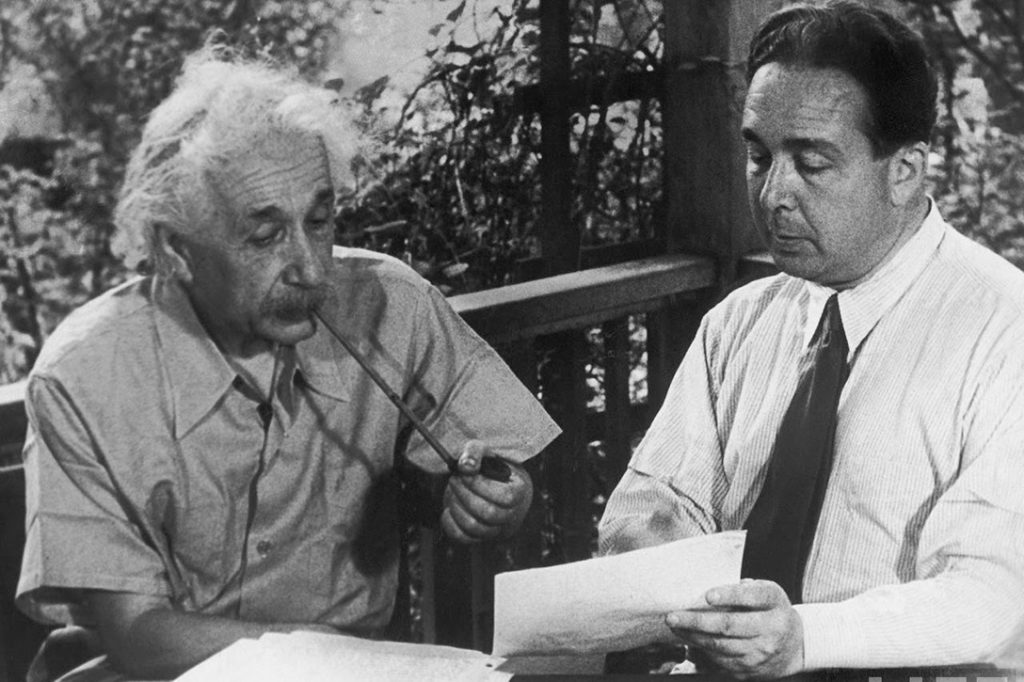 The following excerpt from The Beginning or the End finds the producer of the MGM movie visiting Oppie at his home in April, 1946, to finally nail down his permission to be portrayed in the movie. Oppenheimer’s response would be recorded by the FBI, with a transcript, which appears here, revealed for the first time in the book.

On April 18, 1946, Sam Marx sent J. Robert Oppenheimer a copy of the screenplay for The Beginning or the End, with the hope he would at least “glance through it” before they met three days hence in Berkeley.

That Saturday night Marx left the Palace Hotel in San Francisco and soon arrived at Oppenheimer’s rambling one-story villa, built in 1925 with a red-tiled roof high up on Eagle Hill with an expansive view of three canyons, the bay, and sunsets over the Golden Gate.

After dinner, Oppie spoke frankly about the script, in his usual manner. In a letter to his friend J.J. Nickson he would recount much of this discussion. Based on that, it went something like this:

Oppenheimer: “Some of the themes in the movie are sound, but most of the supposedly real characters like Bohr and Fermi and myself are stiff and idiotic. When Fermi hears of fission he says my what a thrill and my most characteristic phrase was gentlemen, gentlemen, let us be calm.”

Oppenheimer: “Most of the trouble rests in ignorance and bad writing, rather than in anything malign.”

Marx: “Well, that may be true, but look at these newly signed agreements by Fermi and a few others.”

Oppenheimer: “Well, what kind of agreement can you and I make? For example, how about hiring as technical adviser my former aide and Los Alamos historian David Hawkins? Also, I want to be portrayed as a friend of that ethical scientist, what’s his name, Matt Cochran.”

Marx: “Okay on all that. In addition, we will correct all of the factual errors you mentioned and take seriously all of your other gripes and proposed additions.”

Oppenheimer: “If all that is done, and you show me the next version of the script, I will likely sign a release. But I don’t want a fee — just send any proceeds to FAS or set up science fellowships for students.

Oppenheimer would tell Nickson that he found his visitor from Hollywood “sympathetic.” Marx seemed “honestly eager to get the script improved,” but even after the revisions, Oppie predicted “It won’t be very good.” At least in the current story, he added, the scientists seemed to be treated as “ordinary decent guys, that they worried like hell about the bomb, that it presents a major issue of good and evil to the people of the world.” He concluded: “I hope I did right. I think the movie is a lot better for my intercession, but it is not a beautiful movie, or a wise and deep one. I think it did not lie in my power to make it so.”

Oppenheimer seemed uncommonly insecure, however. “Let me hear from you,” he asked Nickson, “particularly if you think I did wrong or want me to try again.” He had other things to worry about as well. The FBI had started tapping the phone in his Berkeley home and recording the conversations.

When Sam Marx returned to Hollywood he immediately began revising the script. And while the studio had decided on Hume Cronyn to play him, that still might change. Marx doubted they could find a better actor, but they could certainly secure a more impressive movie “name.” Kitty Oppenheimer had voiced some opinions on that over dinner, and Marx had asked if she wanted “to volunteer more ideas.”

Fawning over his new friend, Marx assured him in a letter that he had just spent two full days “rewriting” the script (a gross exaggeration), and had impressed on the film’s writer, Frank Wead, and director Norman Taurog, “that the character of J. Robert Oppenheimer must be an extremely pleasant one with a love of mankind, humility and a pretty fair knack of cooking.” Also he passed along to them Oppie’s view that in the script the fictitious characters came to life but “the living characters failed to breathe.” Most critically — and sure to provoke blowback from certain military figures — Marx also revealed: “We have changed all the lines at the New Mexico test so that General Groves is merely a guest and you give all the Orders.”

He closed: “Everyone now is most enthused about the changes I brought back from Berkeley. We are as eager for the truth as you are. . . . I would rather see you pleased with this picture than anyone else who has been concerned with the making of the atom bomb.” Marx may well have been sincere about that, but it never hurt anyone to appeal to Oppenheimer’s vanity.

Two weeks later, near the end of a lengthy phone conversation — taped as usual by the FBI — Kitty Oppenheimer informed her husband, who was in the east, that he had received a letter from a “Hugh Cronin” (as the name was recorded in the transcript), “explaining why he would like to be you.”

“Well, I’ll tell you what I did on this,” Oppenheimer replied, then referred to General Groves’ top aide. “This very ugly creature, [Colonel W.A.] Consodine, called me and said that Marx had said it was all right and would I sign the release, and I said sure. I got the release and I signed it with a paragraph written in saying that all of this is subject to my receipt of a statement from Mr. Sam Marx that he believes the changes that have been made are satisfactory.” Possibly to re-assure his wife, he pointed out that their friend David Hawkins was still at the studio checking on things for him.

Robert: “Well, I didn’t think there was anything else to do. I don’t want anything from them and if I can work on his conscience, that is the best angle I have. It just isn’t worth anything otherwise, darling.”

At this juncture, the call faded in and out. “The FBI must have just hung up,” Robert quipped.

Then Robert concluded: “The only thing we can do there is to try to persuade them to do a decent job.”

The movie would flop when released the following February, and fade from importance, but FBI surveillance of Oppenheimer would continue off and on for years. That probe would culminate in the famous 1954 hearing leading to Oppenheimer losing his security clearance, which led to his steady decline in influence and voice in the national discourse on the further development of nuclear weapons and policy.

Greg Mitchell’s The Beginning or the End was published this month by the New Press. It is his twelfth book. He is the former editor of Editor & Publisher and longtime daily blogger for the Nation.