This is a tale of two boys who grew up with promise. Both had outsized personalities; both were physically strong and towered over their classmates. Both demonstrated athletic ability, albeit at different levels — the black boy from Houston, TX, in football and basketball, and the white boy from Queens, NY, in baseball. Both had big dreams. In his own words, the boy from Texas, George Perry Floyd, wanted to touch the world.

George Floyd eventually did, but in the most tragic way imaginable. His death at the hands of the police — choked to death by a white police officer kneeling on his neck — has embroiled the world in spontaneous civil rights protests not seen since the height of the Vietnam War and the iconic 1960s marches of Martin Luther King Jr. The baseball player from Queens, Donald John Trump, has also touched the world — by becoming arguably the most controversial president in the history of the United States.

George Floyd grew up in a public housing complex surrounded by family and close friends — but also by drugs and violence. He was caught up in the type of targeted police sweeps in poor neighborhoods that were and still are, in many places, considered best police practices in the criminal justice system. Repeatedly arrested for petty theft, trespassing, and drug possession, he eventually took a plea to a charge of armed robbery that had taken place years previously, perhaps to avoid both the cost and risk of going to trial and ending up in prison for life — an outcome so common for those, especially young black men, who cannot afford a good legal defense.

At the time of his death, he had seemingly straightened out his life, having moved to Minneapolis, where he worked as a security guard and where he tried to help other black men get out of “the life.” He kept a Bible under his pillow and liked to read from it aloud. But perhaps Floyd still hadn’t conquered a weakness for petty crime, for on the day he died he had allegedly passed off a counterfeit $20 bill at a convenience store. A witness said it was such an amateur job that the ink was still running.

Counterfeiting money is still in vogue, and remains a crime. But in this Age of Information, what about other counterfeits? What of peddling false information as a hobby, a business model, or a governing style? What of infecting the body politic with the poison of presidentially sanctioned lies? And what if these lies from the White House include demonstrably false charges of murder? Does that just get a shrug?

Donald J. Trump, it can be argued, is our first counterfeit president. As so many public figures tried to warn us in 2016, including oh so many prominent Republicans, Trump never had the requisite experience or the temperament for the job. Now that he is in office, he doesn’t even go through the motions of delivering uplifting speeches to reassure the country in times of peril, or rising above partisan politics to unite a deeply divided electorate. Rather, Trump rules — I hesitate to say “governs” — through libel, insult, dog whistle, division, and intimidation. For Trump, being president does not seem to be a serious undertaking or even a full-time job. It is a hobby, a blood sport. Trump loves fake wrestling, and it seems to be where he got many of his moves. For him, being president is about head fakes and body slams, beatdowns and cheap shots, poses and scowls, strutting and preening. It is an act better performed in front of a mirror than a nation. 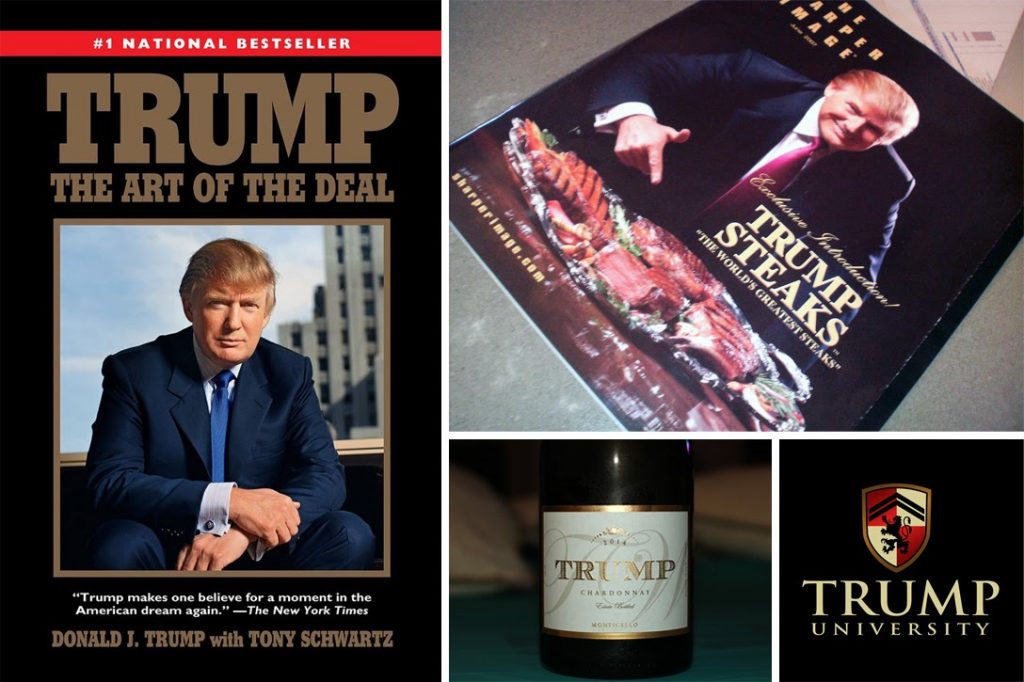 From the very beginning of his career, Donald Trump has peddled a false narrative of himself. For his “autobiography,” The Art of The Deal, he told author Tony Schwartz that his paternal grandparents were Swedes from New Jersey — when in fact they were Germans from New York’s boroughs — because he thought it might sound better. Faking his own lineage! In his autobiography! As good a high school baseball player as he may have been, could he really at any point have been the best player in all of New York, professional players included, as he has suggested from time to time?

He claimed he was a self-made man. Yes, he admitted he had borrowed a million dollars from his father to get started, but he had to pay it back quickly, and did. Thanks to the New York Times, we now know that story is 100 percent apocryphal. The truth was that Donald had inherited close to half a billion dollars, beginning when he was still in diapers, none of which he ever had to pay back. This inheritance itself was counterfeit, due to enough tax dodges and sham corporations and false real estate evaluations to keep IRS agents in a perpetual state of confusion. Trump was heir not just to $413 million but also to a thriving family real estate business that he could step into.

Mythmaking is what Donald Trump has always been about. Lying about everything, no matter how small, soon became a way of life for the future president, much as petty crime would become a way of life for George Floyd. The lies would only become bigger and more pernicious over time.

Donald Trump not only faked his autobiography and his business successes, but also his TV ratings, his romantic conquests, and, on the very first day of his presidency, the size of his inaugural crowd. He could not bear the thought that protests against his election had drawn more people than those cheering his election. He would repeat the crowd-size lie incessantly over the next many months, hoping to make it true. He once told Billy Bush — the very same small-time celebrity to whom he confided his “grab-’em-by-the-pussy” advice — that the conveyance of bogus information was a proven tactic.

“Billy,” he told him, “Look, you tell them and they believe it. They just do.” Sadly, it may have been the truest thing Donald Trump has ever said.

The fake world of Donald Trump expanded inexorably over time. Believing his own con, he had the notion he could teach other people his secrets — needless to say, for a big price tag. One can only imagine a syllabus from a class at Trump University: When to Declare Bankruptcy, How to Stiff Your Creditors, Make Your Own False Paper Trail, How to Pick a Killer Lawyer. Trump University was not only not a university — not even close — it was a hoax that defrauded thousands of gullible students, one that would take the authorities far too many years to shut down.

Another part of the myth was that Donald Trump was extremely generous and public-spirited. A veritable Daddy Warbucks, he wanted us to believe. In truth his charitable family foundation followed none of the rules of philanthropy and gave away next to no money. Instead, it involved itself with self-dealing with his company — paying his legal bills, making illegal political contributions, and buying gifts for himself. A twenty-foot-high oil portrait of Donald Trump, anyone? Remarkably, his children signed off on all of these illegal transactions without consequence. The foundation was also mercifully shut down, but only after it came under the glare of the 2016 election. The counterfeit university and the counterfeit foundation were clearly white-collar crimes. But where was the jail time? For one of his drug busts, for a $10 bag, George Floyd went to jail for ten months. Isn’t defrauding students and charitable donors far worse a crime than being caught with a $10 bag?

Once in the White House, in possession of both the traditional bully pulpit and his ever-expanding Twitter account, there was no stopping Donald Trump. One wants to know whether it is before or after he puts on his orange game face that Trump gets down to his real purpose — spewing out dozens — sometimes hundreds — of lies, infectious invectives, malignant libels, and eye-popping insults. One imagines him on the edge of his bed, smiling like the Joker in Batman, pecking away on his cell phone 280 characters at a time to create his counterfeit universe, in which the only good Democrat is a dead Democrat, and everything Donald Trump has ever done or said is the greatest of all time, something never seen before in the history of the world. In the time it would have taken George Floyd to print a fake $20 bill — assuming he ever did — Donald Trump could create dozens if not hundreds of counterfeit narratives to hold his enemies at bay and promote his reelection. And he does it every day.

If the country can ever get its bearings, we will need to figure out exactly how we came to be so tough on petty street crime and so very tolerant of every manner of white-collar crime, even among our elected officials. Black Lives Matter wants to know. We all want to know. The ink may well have been wet on George Floyd’s fake $20 bill, but the lies, frauds, and cons of Donald Trump have been written in neon lights for more than 35 years.

George Floyd’s brother Philonise, not to mention dozens of passionate civil rights advocates, has been pleading in recent days for a more just and equitable future, for nothing short of the long-promised parity between the races. So let’s rerun the tape on this two-man Floyd-Trump race. In an equal world, one we are hopefully crabbing our way toward, George Perry Floyd and Donald John Trump would have started out much closer to even and ended up not remotely so far apart. Growing up in this new and better world, George Floyd might never have come anywhere near the Big House, and certainly would never have ended up dead under the knee of a bent policeman; Donald Trump, without his half-a-billion-dollar head start, would likely never have ended up in the White House. And billions or not, the media in this New World Order would never have repeated Trump’s birther lies about President Obama, the lies upon which Trump founded his presidential run. Perhaps “the Donald” would have become an emcee for World Wide Wrestling. Or a salesman for skin care products. Or a minor league golf pro. But not the president. Certainly not the president.

Jonathan Z. Larsen is a former editor-in-chief of the Village Voice and New Times, was a bureau chief for Time, and serves as chairman of the board of WhoWhatWhy’s parent nonprofit. His book, The Perfect Assignment: A Memoir of Journalism in the Golden Age, was published by Tide Pool Press in January.

One response to “Our Counterfeit President”