The widely published image of a clear and bright Beijing, China — a city otherwise often covered under a sooty fog — offers hope that there could be a silver lining to this devastating pandemic. According to one analysis, carbon dioxide emissions in China were down by as much as 25 percent during the country’s weeks of industrial shutdowns. Particulate matter in the air also decreased.

The question is: Will any of these positive impacts last? The answer depends on how we respond during the crisis and what changes we make permanent after it passes.

“If emissions go down a little for a year and then bump back up again, in principle that helps a little bit,” Phil Duffy, president and executive director of the Woods Hole Research Center, told WhoWhatWhy.

Duffy is a physicist who has dedicated much of his career to addressing climate change. He has testified before Congress and worked on climate policy in the White House during the Obama Administration. He expects some of the positive impacts on the environment to last.

“My guess is there will be more working from home permanently when this is all over with, and that will be good for greenhouse gas emissions,” Duffy said. 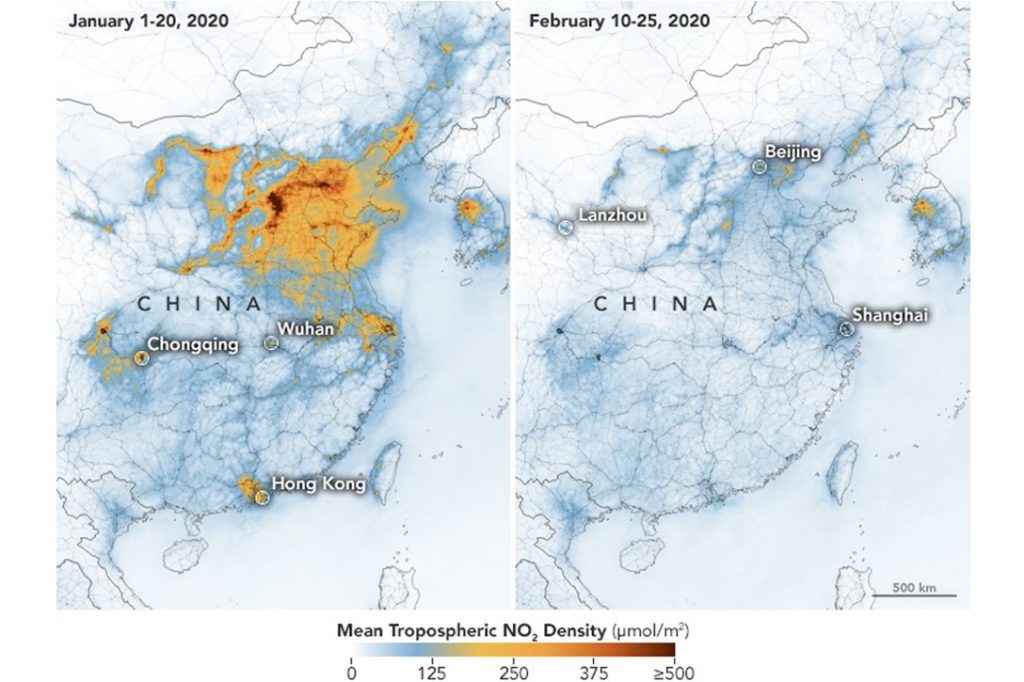 Although there have been short-term improvements, Duffy worries that the economic turmoil caused by the pandemic could actually delay improvements to reduce carbon emissions.

To combat this, Duffy wants to see environmental incentives built into future stimulus packages. The $2 trillion Coronavirus Aid, Relief and Economic Security Act that was enacted on March 28 is, as Duffy describes it, “climate neutral.” There aren’t any significant incentives to move forward with clean energy solutions, but there also isn’t anything particularly harmful, like subsidies for oil and gas industries.

The CARES Act may be neutral, but it is also a missed opportunity. People are noticing the reduced smog over China and talking about it. It is a chance to engage the American public on climate change.

“We have people’s attention,” Duffy said. “Now is the time to talk about it.”

Congress should find ways to include environmental incentives into stimulus legislation moving forward, Duffy said. There is precedent for this. In 2009, the American Recovery and Reinvestment Act included $4.5 billion to modernize the electric power grid. Most of that, $3.4 billion, went to the Smart Grid Investment Grant program, which helped electricity providers upgrade systems.

It’s not just environmental advocates who are going to be calling for these kinds of provisions in any stimulus that passes in the wake of the coronavirus pandemic.

“You’re going to see not just environmental folks push for that but business folks who are in that line of work — solar panels, or wind generating technology,” said Bobby Reynolds, a political strategist and former political director for Sen. Susan Collins (R-ME).

Reynolds expects environmental advocates who are politically savvy to team up with businesses and work together to convince lawmakers to funnel stimulus money their way.

It can work even with the most unlikely of characters, according to Reynolds. As proof, he told the story of a construction company with a conservative owner who went from building bridges to installing wind-powered energy.

“If you were going to build a Republican, conservative businessman out of spare parts, you’d build him,” Reynolds said. “Bridges started to dry up, so he started installing wind-based stuff. Now he’s a new-energy guy.

The Eerie Parallels Between COVID-19 and the Plague

“Lawmakers are going to be looking to direct money to projects in their state — projects they can stand upon saying they are responding in real time to this crisis,” he said. “Heavy hitters on the ballot are going to want to be seen as responding to this.”

One way to promote action on climate change that is less concrete than funding emissions-reducing projects, but potentially more consequential, is to highlight the similarities between the two crises.

“There are some interesting parallels between climate change and the epidemic,” Duffy said.

According to Duffy, similar approaches are needed for an adequate response to both problems: strong leadership, global cooperation, and mobilization of public and private resources.

Another similarity? Ignored warnings. Scientists have been talking for years about both the dangers of climate change and the potential for a devastating pandemic. The warnings largely went ignored. Duffy thinks that is because of a failure of imagination.

“It’s just hard to imagine some enormous calamity because, for most of us, we’ve never experienced that,” he said.

The pandemic, with its economic and societal ripple effects, is an example of something unimaginable actually happening, he said. Framing it this way, Duffy believes, could help people grasp the reality of the consequences of not taking action on climate change: “To me, it brings home this lesson that just because something hasn’t happened doesn’t mean it can’t happen.”

One response to “Could COVID-19 Lead to a Cleaner World?”