TASHKENT, Uzbekistan — To many Americans, Central Asia may seem distant and insignificant.

But the region is a strategic chunk of steppes, deserts, and overpopulated valleys stretched between Russia, China, and the Caspian Sea — an aquatic treasure chest filled with some of the world’s largest untapped hydrocarbon resources. It also borders Iran and Afghanistan.

President Donald Trump is especially fond of the word “great,” but his administration seems to be losing a 21st-century replay of the “Great Game,” a confrontation between the Russian czars and the British Empire over Central Asia.

Only now, there are three contenders — the US, Russia, and China. And now China has the upper hand in the game.

China’s persecution of 11 million Uighur Muslims has been condemned as “cultural genocide” harking back to the age of totalitarianism. But to date the response of the world has been reminiscent of British Prime Minister Neville Chamberlain’s appeasement of Hitler over the invasion of Czechoslovakia in 1938, which he infamously called “a quarrel in a faraway country between people of whom we know nothing.”

But even in the Muslim nations of Central Asia, home to sizable diasporas of Uighurs and other Chinese Muslims that border the Uighurs’ ancestral land of Xinjiang in northwest China, the despotic oppression has elicited the diplomatic equivalent of a blank stare and a nonchalant shrug.

This disregard was highlighted when Secretary of State Mike Pompeo arrived in Tashkent, the Uzbek capital, last month, looking for leverage to unite the governments of ex-Soviet Central Asia against China.

“In my private meetings today, I plan to discuss the Chinese Communist Party’s repression of Uighur Muslims, Kazakhs, and members of other minority groups in Xinjiang,” Pompeo said last month.

The private meetings were face-to-face discussions with each foreign minister of the five “stans.” Three of these are mostly Muslim nations — Kazakhstan, Uzbekistan, and Kyrgyzstan.

But Pompeo’s Uzbek counterpart spoke for the entire region of more than 60 million when he declined Pompeo’s offer — politely, but firmly.

“We would really not like to feel on ourselves the unfavorable political consequences related to the competition in our region between large powers,” Uzbek Foreign Minister Abdulaziz Kamilov explained to WhoWhatWhy.

“When there’s so much money at stake, he does not give a damn about the Uighurs,” Muhammad Bekjan — who spent almost 18 years in Uzbek jails after being accused of organizing a “coup” against late predecessor Islam Karimov — told WhoWhatWhy. 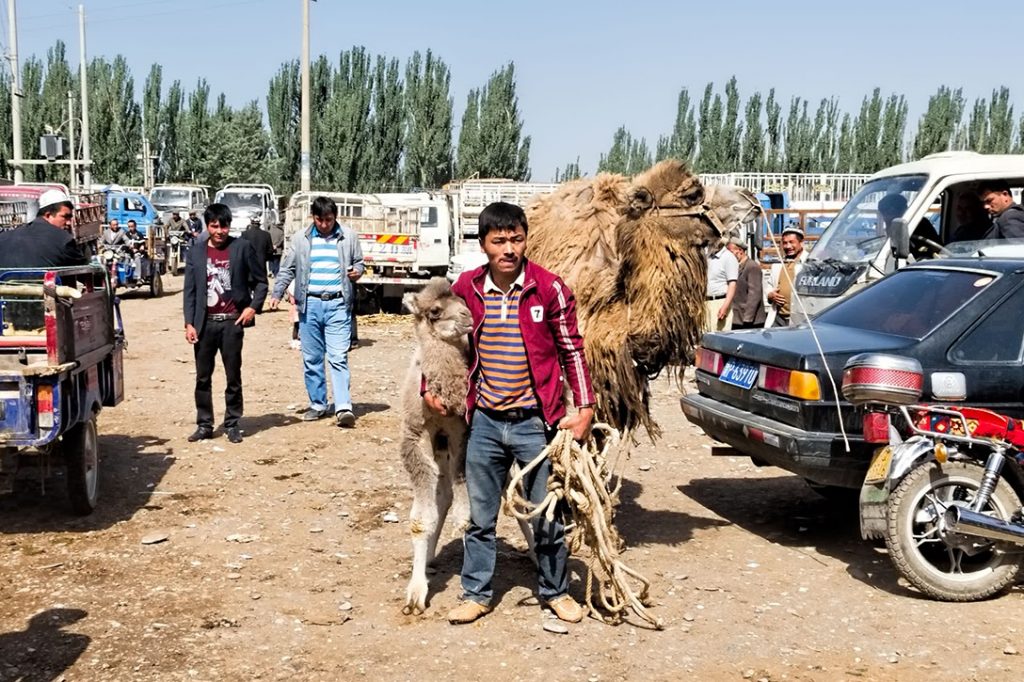 Uighur man struggles to keep his baby camel going in the same direction that he is leading the mother camel at the Sunday Livestock Market in Kashgar, China, on May 15, 2016. Photo credit: Dan Lundberg / Flickr (CC BY-SA 2.0)

After the 1991 Soviet dissolution, the West was keen to boost its presence in Central Asia. The US and the European Union provided expertise, aid and scholarships for bright students, while Western oil giants invested tens of billions in oil and gas.

Weeks after the attacks on September 11, 2001, Uzbekistan became the first ex-Soviet nation to offer Washington its airspace and base on the Afghan border.

But the hopes of planting Western democracy in the arid region never materialized. Increasingly autocratic regimes stagnated under aging strongmen with Soviet-era backgrounds who extended their rules by vote-rigging, weeding out opposition and dissidents, and holding constitutional “referendums” to remove term limits.

After Washington criticized Uzbekistan’s violent crackdown of a 2005 popular protest that left hundreds dead, Tashkent kicked out US forces from the Karshi-Khanabad base. 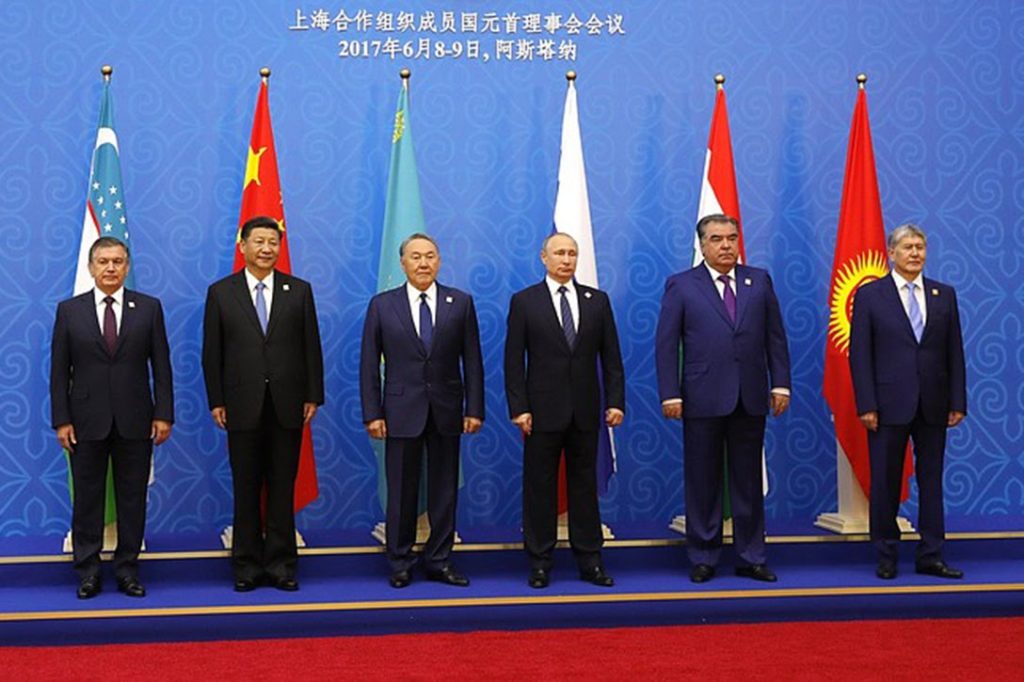 Central Asian leaders were also worried about the revival of Islam after decades of suppression under officially atheist communists. The threat of radicalism and terrorism — real or imaginary — became an excuse to tighten political screws, while Beijing and Moscow never objected to the deteriorating human rights record.

“The political regimes of Russia, China and the Central Asian nations strengthen cooperation in their crackdown on dissidents like never before,” Nadejda Atayeva, president of the Association for Human Rights in Central Asia, told WhoWhatWhy.

In Tashkent, billboards advertise the shows of Russian pop stars and stand-up comedians, while street hawkers peddle pirated DVDs of Russian flicks, as well as Hollywood hits and Netflix shows — overdubbed in Russian.

An Uzbek blogger sued a bank that offered contracts only in the Russian language even in the remote rural areas that never had seen the forced Russification of the communist era.

At least two million Uzbeks work in Russia as labor migrants, supporting their families and the Uzbek economy.

“There were a couple of Chinese soap operas on Uzbek television, but very few people know Chinese literature or poetry here and in Central Asia in general,” said Ravilya Khaitamova, a 33-year-old health official who has been studying Chinese for almost two years.

But Moscow has lost the economic competition with Beijing.

It hasn’t had a monopoly on hydrocarbon exports since 2009, when China completed a pipeline network that gets natural gas from Turkmenistan, Uzbekistan, and Kazakhstan to as far as Shanghai.

Russia’s key imports to the region are wood, steel, and foodstuffs — while China has been responsible for virtually everything else since the early 2000s.

Back in 2007, this reporter visited Khorgos, a border town on the Kazakh-Chinese border, where a gigantic trade center was being built in the sun-parched steppe.

“This looks like the US-Mexican border,” border official Talipzhan Suleimanov said. “We are the Mexicans, because the Chinese are so much more advanced.”

Beijing sees Central Asia as the backbone of its gargantuan Belt and Road project, designed to connect nations from Pakistan to Poland to China — and revive the Great Silk Road that connected the Middle Kingdom with the Roman Empire more than two millennia ago.

So, Pompeo’s visit was a failure, some observers conclude.

“Even such a brutal politician [as Pompeo] cannot take China away from Central Asia or at least decrease its domination in the region,” Arkady Dubnov, a Moscow-based Central Asia expert, wrote in an opinion piece published by the Insider, a Russian online magazine. China “will remain the main financial sponsor and logistical partner of the five Central Asian nations as part of the One Belt, One Road project.”

Pompeo could not draw the attention of regional politicians to the plight of the Uighurs, but a Uighur community leader compared the economic takeover of the region to the way Beijing has been subjugating his homeland — China’s mostly Muslim, westernmost region of Xinjiang — since 1949.

“Slowly, they chipped away our independence, buying our leaders, and here we are today,” Salih Hudayar, who heads the East Turkestan National Awakening Movement, a Washington-based group, told WhoWhatWhy.

“In the long run, [the Central Asian governments] will too become like us, they will lose their independence in favor of some small economic benefits.”