HONG KONG — Long lines form outside any store rumored to have stocks of surgical masks, hand sanitizer, and even toilet paper.

All public buildings are locked up, schools and universities closed, libraries shut, and post offices on restricted opening schedules. Civil servants and most office workers are working from home and the tourists are long gone.

At lunchtime in the city center, usually bustling with hungry office workers, staff wearing face masks stare out anxiously from nearly empty restaurants. To date, the new coronavirus (now officially named COVID-19 by the World Health Agency) has claimed the life of one person in Hong Kong. But the fear is proving even more contagious than the disease as the city’s economy seizes up.

“It’s getting worse, and we have to find a solution as a business — this is the worst time ever for me,” says shop owner, Jensen Lau, who runs the Galerie le Bon in Hong Kong’s fashionable Soho district, where half the local restaurants have already closed.

Hong Kong has been here before. The severe acute respiratory syndrome (SARS) coronavirus in 2002-03 claimed the lives of 774 people worldwide, including 299 in Hong Kong. That deadly outbreak demonstrated that it’s not so much the death toll but the terrible acute anxiety and the drastic preventive measures which cause deep and long-lasting economic damage.

“The actual impact of this epidemic on Hong Kong’s economy depends on developments, but I believe that the outlook is not optimistic and is likely to be higher than the impact of SARS on the economy in 2003,” he wrote on his official blog last Sunday. Almost everyone blames Hong Kong Chief Executive Carrie Lam’s government for exacerbating the problem.

“Clearly the government is not doing enough to clarify information — the government is doing a terrible job,” said Lau. Many predict it will only get worse, because Lam defied medical advice and a strike by medical professionals, and kept the border with mainland China open until this week.

“The health system is overcrowded already, and coronavirus patients from the mainland were coming to Hong Kong to seek treatment,” said Libby Choi, a pharmacist who works for the Hong Kong Hospital Authority, who was part of a strike of medical workers demanding a closure of the border with China. 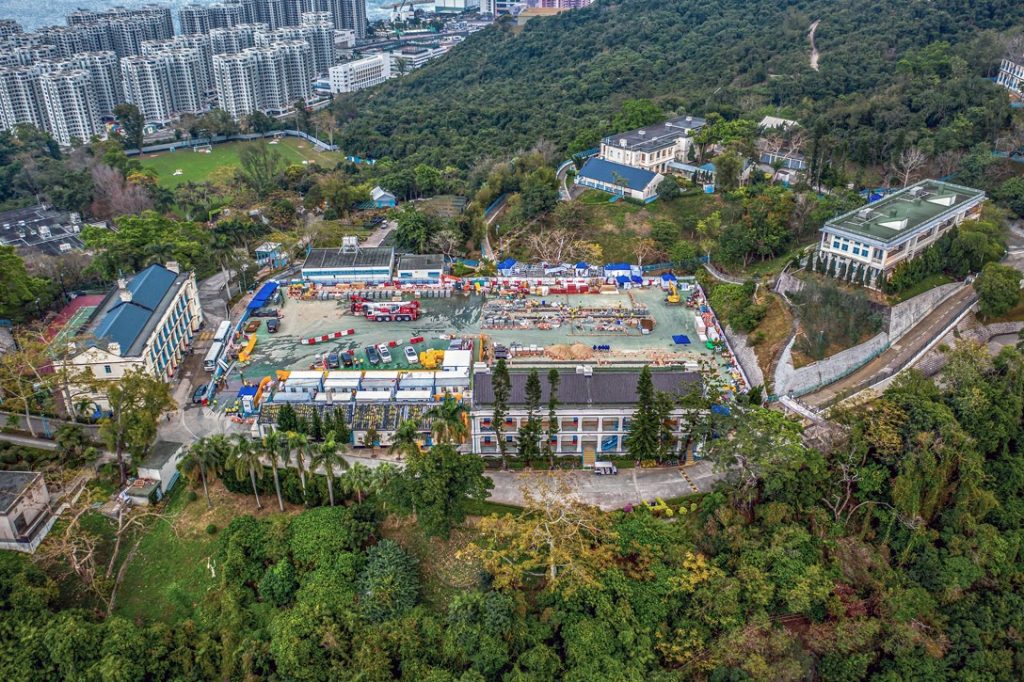 The largest quarantine site in Hong Kong is being built at full speed, with completion expected in one to two months as the need to isolate people grows amid the coronavirus outbreak. Photo credit: Studio Incendo / Flickr (CC BY 2.0)

The anxiety and panic paralyzing the Hong Kong economy is amplified many times in mainland China, where by Tuesday, confirmed cases exceeded 43,000 and the death toll passed 1,000.

This week, Chinese people tentatively returned to work after an extended Lunar New Year holiday that was effectively a national lockdown: Public transport was closed, roads blocked, and citizens ordered to stay at home.

China must now seek a balance between maintaining a lockdown to defeat the coronavirus and avoiding the collapse of supply chains and business bankruptcies. President Xi Jinping has taken personal charge of the crisis, stressing what he calls “resolutely winning the people’s war against the pneumonia epidemic caused by the novel coronavirus.”

According to state news agency, Xinhua, the vice governor of China’s central bank, Pan Gongsheng, stated this week that the epidemic might disturb economic activities in the first quarter of this year. But he predicted the economy would steady shortly after the epidemic is contained, because of the unleashing of pent-up demand. Recent evidence suggests this may be wishful thinking.

When share trading resumed on February 3, Chinese stocks collapsed, with hundreds of firms plunging by the daily limit of 10 percent. It was reported that China’s central bank had pumped 1.2 trillion yuan ($174 billion) into the financial markets on the same day as part of an effort by regulators to mitigate volatility. Since then, the key Shanghai and Shenzhen share indices have made a gradual recovery, but this week the central bank still felt it necessary to pump another 900 billion yuan ($129 billion) into the financial system.

On Tuesday, Reuters reported that more than 300 Chinese companies are seeking bank loans totaling at least 57.4 billion yuan ($8.2 billion) to help to soften the impact of the coronavirus.  Research published by Tsinghua and Peking universities found that 22 percent of firms plan to cut salaries or reduce jobs as a result of the outbreak, and 58 percent expect  revenues to shrink by 20 percent or more.

Economists are already forecasting that China’s economic growth may drop below 5 percent in the first three months of the year, from 6 percent in the fourth quarter of 2019. Many have warned the downward trend may continue.

Will the Coronavirus Find You?

China’s overheated property market, estimated to represent up to 40 percent of the country’s GDP, has stopped in its tracks. Real estate offices are closed and confidence has deserted the market. Chinese social media is full of stories of small businesses struggling to survive. In the high-technology city of Shenzhen, often cited as a symbol of China’s economic success story, authorities have announced a raft of measures to support small- and medium-size enterprises, including tax cuts and subsidized loans.

It’s too early to say if this marks the twilight of the Chinese economic miracle, but the highly contagious virus is less than two months old and there are no indications of the death toll abating. It’s already inflicting a heavy economic blow that could have international repercussions reaching as far as Europe and North America. Compared with 2003, when the economic damage caused by SARS was largely confined to China and Hong Kong, China is more plugged into the international economy and vital to global supply chains.

“If the virus continues to spread it could endanger the fragile global economy, which was set for an upturn following the signing of the phase-one US-China trade deal,” wrote Wang Huiyao, founder of the Beijing-based Center for China and Globalization, in the South China Morning Post, this week.

“No one knows when this will end, “said shop owner Lau. ”It’s the uncertainty and the anxiety.”