Editor’s Note: This is one in an occasional series of viewpoint pieces on the candidates. At WhoWhatWhy, we’re especially interested in hearing from those who have had documentable personal experiences with candidates that may provide insight into their priorities, manner, and character.

To his great credit, the Bernie of 2020 is asking the tough questions, putting forward solutions, and calling out endemic corruption. The Vermont senator has shifted the dialogue in the election to give voice to many Americans whose voices are not heard in mainstream media.

But I’m haunted by his all-too-apparent lack of emotional empathy and humility, both of which I believe are vital characteristics of true leadership. It sometimes seems he has trouble trafficking the voices in his head, the voices of those he represents, and the voices of those who don’t agree with him but might work with him to arrive at solutions.

I know at least three vibrant and effective Vermont leaders who have, presumably because they’re business leaders, been the subject of Bernie’s direct and personal disdain. In each case, they came away nonplussed, especially since they are largely sympathetic to many of his positions.

Such behavior won’t be advantageous for a president, who is, after all, on the world stage, nor will it advance US foreign or domestic economic and security interests. With no invidious comparison implied, the current administration is a screaming example of such a lack of leadership skills at the other political extreme.

Effective leadership listens and considers at least as much as it speaks. Too often, Bernie doesn’t respond to a question or a challenge but rather blurts out what he’s been anxious to say. It may or may not be germane to the question or topic at hand. Although he is not alone in this behavior, it does little to elevate him above the field of febrile candidates grasping for airtime. 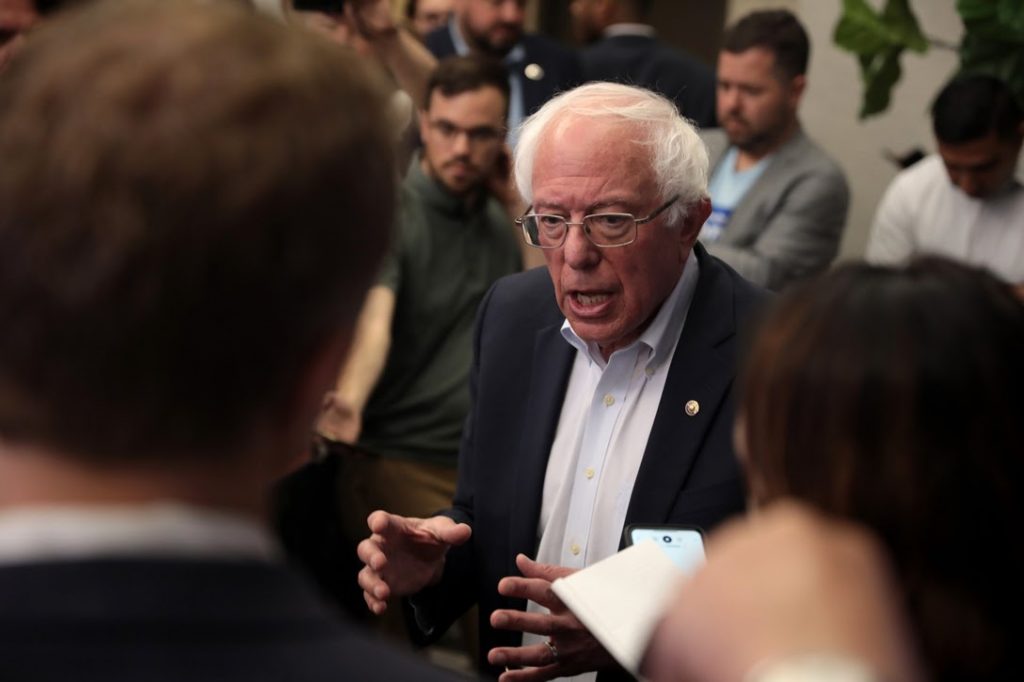 Sen. Bernie Sanders (I-VT) speaking with the media at the 2019 Iowa Federation of Labor Convention hosted by the AFL-CIO at the Prairie Meadows Hotel in Altoona, Iowa on August 21, 2019. Photo credit: Gage Skidmore / Flickr (CC BY-SA 2.0)

The power of his statements would be magnified by an ability to speak calmly, listen respectfully, and respond directly. Again, to his credit, he is rife with damning and accurate facts about how far we’ve drifted from representing the interests of too many Americans. His willingness to call out the failings and limitations of our current version of capitalism is admirable but people don’t react well to being scolded.

Bernie deserves his fans’ accolades for being a voice in the wilderness as our economy and politics have evolved over time to enrich fewer and fewer. Most people I know are grateful he’s in the game and respect his courage, if not his style. But the world’s an imperfect place. As history has all too often shown us, “revolution” brings little beyond violence and new faces of corruption. Our pluralistic democracy has been through tough times before — the McCarthy Era, the Palmer Raids, the Know-Nothings, the Civil War, desegregation. To our great credit, we’ve generally managed to arise from each turmoil stronger and we will again.

Although he deserves credit for his courage in calling out economic injustice, is he the right leader for a deeply polarized America and the best exemplary leader of the free-world? Since leadership extends well beyond policy and speechmaking, leaders need emotional intelligence, humility, and the capacity to compromise and derive consensus from diverse views. Bernie’s vilification of all-encompassing groups­ like “billionaires” (George Soros, Warren Buffett), his Old Testament-style homilies about “them vs. us” simply won’t advance an already polarized world of increasing complexity, in which solutions must be negotiated respectfully among world leaders and diplomats. The Weimar Republic taught us that generalizations are better at polarizing society and amplifying hatred.

Bernie and I have known one another since the early ‘70s. We first met when we came to our recording studio in a barn in North Ferrisburgh to record a teaching curriculum on cassettes he’d developed that reframed American history from a democratic-socialist perspective — all well and good. Our relationship waned until the studio merged with a film company and became Resolution. Then, in his 1990 run for Congress, we were hired by his campaign to produce his TV campaign materials. I was not part of the effort but my partners were. I’ve seen Bernie only sporadically in the intervening years but followed his thoughtful initiatives as Mayor of Burlington, which earned him the support of much of the business community.

But today we must focus on the art of the possible, the incremental steps that reunite us with our founders’ nascent vision. This demands a leader who listens to voices beyond those in his own head, considers all points of view carefully, and then works to unite the best in the country to revitalize our democracy.

And… she or he will also need to smile more.

Bill Schubart is an author who lives in and writes about Vermont.